LONDON, United Kingdom — The Savigny Luxury index (“SLI”) continued its descent in December, falling over 6 percent, losing more ground to the MSCI World Index (“MSCI”) which fell just over 5 percent. Both indices were pushed down by talks of a US interest rate hike, which materialised during the month, whilst the SLI suffered from further smatterings of glum trading data, notably from Hong Kong and China.

At the beginning of the month, Federal Reserve Chair Yellen’s comments paved the way for a small rise in interest rates, causing global markets to take a dip. The hike was then confirmed at the Fed’s policy meeting on 16th December (+0.25 percent); the markets had already made the adjustment.

The little newsflow that has come out of the luxury sector this month has been depressing. Prada reported a 38 percent plunge in its third quarter profit, driven by continued weakness in China and a worsening situation in Hong Kong. Swiss watch export statistics for the month of November echoed this situation: exports fell nearly 6 percent as the industry recorded its worst November since 2010. Sales in Hong Kong, watchmakers’ largest market, contracted by 27 percent, hampered by the relative strength of the Hong Kong dollar versus the devalued Chinese yuan.

Corporate activity was sustained this month with a marked emphasis on shoes. The sale of Sergio Rossi to Italian private equity group Investindustrial was finalised, ending an almost year-long process with an estimated price tag of €100 million; UK shoe brand and retailer Kurt Geiger was bought by Cinven for £245 million; and Chanel acquired one of its Italian shoe manufacturers. Estée Lauder continued its strategy of picking up smaller brands with great growth potential by purchasing an interest in Have & Be Co Ltd, the Korea-based owner of Dr, Jart+ and Do The Right Thing beauty brands.

Two notable deals are currently in the pipeline: Eurazeo is reportedly in due diligence to acquire French fashion label Isabel Marant — the business is currently turning over around €200 million. Qatar-owned Mayhoola is said to have invited banks to pitch for the IPO of Valentino — the luxury fashion brand has estimated sales of €1 billion and an EBITDA of €200 million.

We mentioned it before and we’ll mention it again: Christmas trading results are next on the horizon. The general sentiment is clearly prudent, with personal luxury goods sales (defined as fashion, leather goods, watches, jewellery and cosmetics) set to close the year at almost nil growth, relative to other segments of luxury, such as high end travel or luxury cars, which are forecast to have grown in high single digits this year. 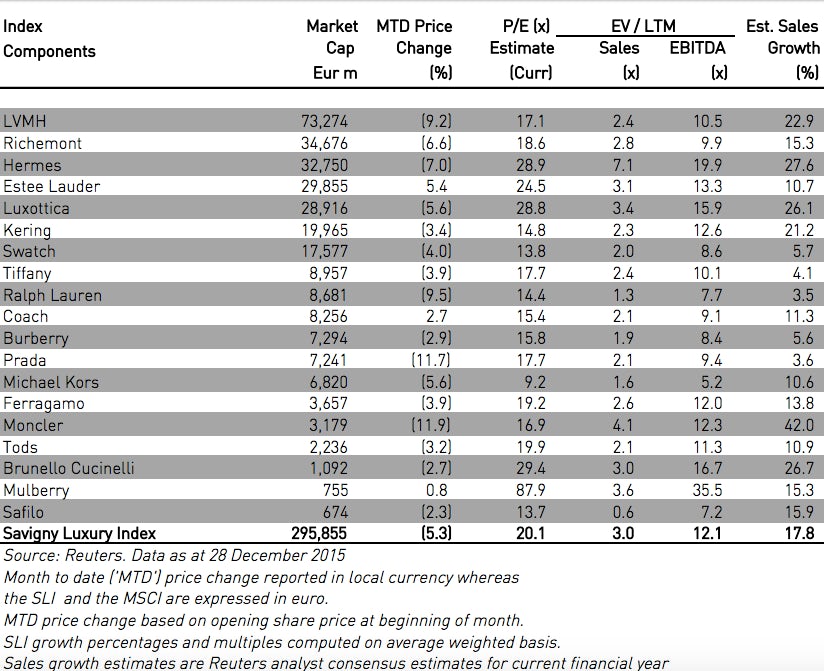