One of Asia’s poorest nations is also one of its most exciting markets. But just how enthusiastic should fashion brands be about Myanmar’s 50 million would-be consumers?

One of Asia’s poorest nations is also one of its most exciting markets. But just how enthusiastic should fashion brands be about Myanmar’s 50 million would-be consumers?

YANGON, Myanmar — “Just jump in any taxi and I’ll tell you what you’re going to see,” says John Lwin, the flamboyant founder of Star Event Production, a local company that has become something of a one-stop-shop for Myanmar’s fledgling fashion industry.

“You’ll see a monk in a traditional orange tunic, teenagers wearing jeans, kids playing football wearing longyi sarongs and young people wearing stuff that could blend in in New York or Tokyo. You’ll get all that in the first ten seconds around Yangon,” he gushes.

Myanmar’s commercial capital Yangon is home to about six million people, most of whom commute through a labyrinth of pagodas, colonial-era buildings and a patchwork of luxury condos that don’t quite overshadow the sprawling slums on the city’s periphery.

John Lwin is someone who has served up glitzy fashion and entertainment events for Yangon’s elite for more than twenty years. No one mistakes him for a wallflower in this city. But among the fancy gowns and flashy suits that mill around him at the high-octane events where he holds court, Lwin can appear understated in what seems like a simple black outfit.

Just like the market that sustains his business, there are hidden layers to this fashion entrepreneur. For despite Myanmar’s tropical heat, the black outfit Lwin wears is more often than not a smouldering ensemble of head-to-toe leather flanked by copious amounts of jewellery.

A market of extremes

Whether in government or in business, power tends to be consolidated in the hands of the privileged few in this country. Lwin’s company controls not only Myanmar International Fashion Week and Myanmar Model Agency, but also the business units that represent the celebrities and singers, who occupy his front rows and the shopping centres that host his fashion shows.

“I’m wholeheartedly involved here,” he shrugs, matter-of-factly. Punctuated by the occasional fire juggler or death-defying acrobat, Lwin’s spectacular fashion shows are clearly catering for local tastes and local designers — and they operate in a market that has yet to adopt the sleeker codes of the global fashion industry.

During decades of political isolation, oppressive military rule and economic stagnation, few Western fashion products made it into Myanmar unless they were brought back from lavish shopping sprees in Singapore, Hong Kong or Bangkok — cities that are still among the favourite haunts of the country’s wealthy elite. 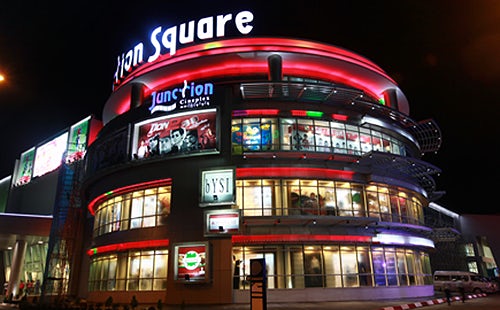 Local entrepreneurs had few opportunities to hobnob with international executives or even encounter international standards of business until very recently.

Parkson, the upmarket Malaysian department store with branches throughout Asia, was the first major international retailer to open in Yangon two years ago. But like the other modest shopping centres in the city, most of the brands on offer are regional players from Singapore, Thailand and China rather than globally renowned brands. Any big designer names found at the likes of the Taw Win Centre, Junction Square or the Dagon Centre are usually limited to the cosmetics counter.

“Myanmar's fashion industry experienced a lot of growth in the 1990s, but took a big hit due to economic sanctions introduced [by the US and the EU] in the 2000s. The sanctions presented a big challenge and made our market more limited compared to other countries,” Lwin explains. “But I honestly do think Myanmar has made leaps and bounds in the last few years.”

Since 2011, President Thein Sein has introduced a raft of political and economic reforms, which prompted the European Union, the United States and several other countries to lift most of their sanctions. For the first time in a generation, international investors began to seriously consider doing business in the country that some still call Burma.

Myanmar’s economy grew by 8.5 percent last year, the sixth highest rate of growth in the world, and is forecasted to grow by about the same rate each of the next two years.

“Thankfully [most] sanctions no longer exist, but because of laziness and the fear of dealing with previous legislation, most international banks still try and avoid transactions with Myanmar, which is problematic,” says Ivan Pun, an entrepreneur who opened a year-long pop-up retail concept called TS1 in Yangon which combined art, fashion and food to gauge interest in the market and to learn more about the local consumer.

“During our Dockside Market fashion pop-up, we presented a selection of womenswear designers who were young and exciting and yet already quite established,” adds Pun, who is the Oxford-educated son of the Burmese multi-millionaire property developer Serge Pun. 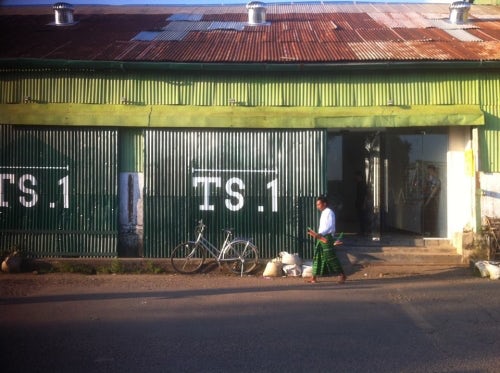 Mary Katrantzou, Carven, 3.1 Phillip Lim and Nicholas Kirkwood were a few of the brands he sold to well-heeled clients hailing from cities like Yangon, Mandalay and the capital Naypyidaw, who can afford luxury goods in Myanmar. He also tapped Mo Hom, a ‘repat’ like himself who had returned to Myanmar from abroad, to design a range made of local fabrics.

Pun says that although the experiment was a success, fashion won’t be available when TS1 reopens as a permanent space in Yangon early next year because the business will be devoted exclusively to art. “We’ll definitely look at fashion again in a few years [but] I think it’s still very early for the luxury market in Myanmar.”

“But it certainly is time for brands to start thinking about how they want to enter this market and build their presence here. It’s important for quality malls to come online. Many are now under construction and will be completed over the next two to three years. The existing real estate options don’t necessarily fit the requirements for most international brands,” he explains.

In Yangon alone, the number of high net-worth individuals (US dollar millionaires) is expected to double over the coming decade. By 2024, there will be more than 3,500 millionaires in Myanmar’s largest city, according to Knight Frank’s 2015 Wealth Report. Nationwide, the ultra-wealthy in Myanmar have grown from 14 to 42 in the past decade. Those with a net worth of more than $30 million are forecast to double in the next decade to around 85.

The gap between rich and poor is stark in Myanmar and even more pronounced than many other developing countries in Asia. According to the World Bank, around 35 million of Myanmar’s 53 million people still don’t have access to electricity and the average income stands at a paltry $1,200 per year, which is one of the lowest in the South East Asian region. Mobile phone and Internet penetration rates are at 20 percent and 10 percent respectively.

With national elections set to take place next month, pitting the ruling party against the pro-democracy politician and Nobel Peace Prize winning opposition leader Aung San Suu Kyi, business leaders are holding their breath until there is a clear outcome.

“Myanmar is one of the most politically unstable countries in the world, which still poses a barrier to foreign investment. It is also very difficult in terms of business procedures, ranking 177th out of 189 countries,” says Carrie Lennard, Euromonitor International’s business environment manager, citing the World Bank’s Doing Business 2015 report.

“But the government has recently eased foreign direct investment restrictions, such as those governing the use of private land in Myanmar — and the repatriation of profits by foreign companies,” she adds. Pointing to the country’s rise from 180th to 156th place in the Corruption Perceptions Index over the past three years, she adds: “Myanmar is also offering tax breaks to foreign investors [and] corruption levels are declining.”

While the quality of Myanmar’s business environment is beginning to improve, the overall picture is still one of confusion and complexity, especially around trading rules and legal frameworks. “Logistics can be an issue because, even though the legislation is now straightforward, the reality of clearing customs can be an issue,” says Pun.

Until the country develops better retail and urban infrastructure, such obstacles will continue to deter some global brands from entering Myanmar — including some of the fast-fashion and high street brands that could potentially find immediate markets there. Indeed, selling to Myanmar may yet take some time, but manufacturing in the country is another matter.

Myanmar exported $1.56 billion worth of garment products in 2014, according to MGMA (the Myanmar Garment Manufacturers Association). This represents a near doubling of garment product export revenue in just two years.

“The key reason behind this is clear,” says Lennard. “Myanmar had the lowest hourly manufacturing wage in the world at just 30 cents in 2014, compared to the average of $20.20 in OECD countries.”

Dozens of factories now supply to Europe, Japan, South Korea and China, and a few are targeting the US where the aftermath of sanctions still makes it harder. H&M, Gap and Adidas are some of the global names now manufacturing or using suppliers in Myanmar.

In response to critics who are concerned about worker welfare and the risk of exploitation in the country, the MGMA published its first code of conduct earlier this year which some see as a small step forward.

Ethical concerns notwithstanding, Myanmar’s garment manufacturing industry is as dynamic as the prospects for its consumer market, which makes for a powerful combination in what is Asia’s last big ‘untouched’ opportunity.

Strategically sandwiched between India and China, Myanmar has the potential to become a much bigger player in the regional supply chains of Asia’s garment industry. Most analysts agree that it will take some time for the masses to be lifted out of poverty and much longer before it can achieve the prosperity levels like those its South East Asian neighbours.

But what it lacks in terms of broad-based purchasing power, the country can, at least, partially make up for in terms of its human capital.

“The next generation of Myanmar’s fashion leaders are coming up now,” says John Lwin. “They’re entrepreneurs, self-starters and some of the finest talent in the region. As our young people become more interested in global trends and the country becomes more [stable], Myanmar has the potential to become a very profitable market for the world’s fashion brands.”