MEXICO CITY, Mexico — The upscale district of Polanco is known for being Mexico City’s ground zero for luxury.

Here, Louis Vuitton, Gucci and Hermès stores mingle with high-end department stores like El Palacio de Hierro and local high-end boutiques such as Lago DF. What you wouldn’t expect to find is Amazon, with a full range of products on display in time for the region’s biggest shopping holiday.

But indeed, where China has Singles’ Day and the US has Black Friday, Mexico has its own shopping bonanza.

El Buen Fin (The Good Weekend) saw over $6 billion in sales this year, according to the Mexican Chamber of Commerce, Services and Tourism. During the event, which took place over the weekend commencing November 15, e-commerce sales surged 35 percent and fashion was crowned the top-performing category.

But the numbers achieved during this year’s Mexican festival are just a drop in the ocean compared to the wider Latin American market. According to Euromonitor International, the value of Latin America’s internet retailing sector will surge by more than 23 percent in just one year, from $53.1 billion in 2019 to $65.6 billion in 2020.

With the IMF characterising the regional economy as “sluggish” and street protests from Bogota to Santiago hitting international headlines, it may not seem like the best time to be focusing on Latin America. But as home to a young and technology-savvy population of nearly 800 million, the region is still largely underserved and represents an exciting online opportunity for the fashion industry.

Indeed, Euromonitor estimates that the regional apparel, footwear and accessories e-commerce market will grow more than 22 percent year-on-year, from $6.2 billion this year to $7.6 billion in 2020. From 2020 to 2021, growth will exceed 21 percent.

Battle Between Local and Global Giants 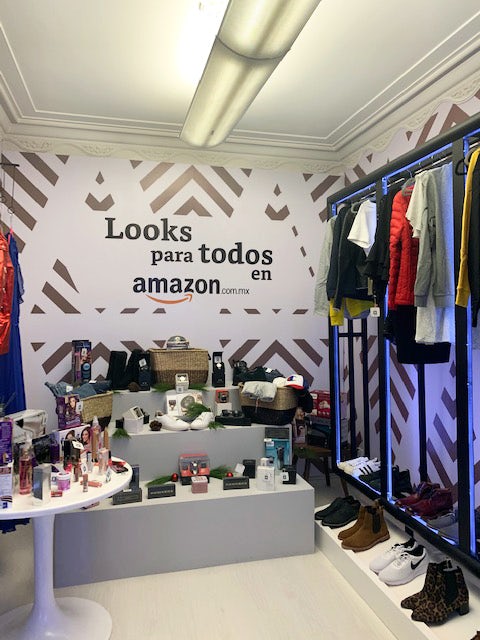 “It’s not a store, it’s a showroom for our clients to discover the millions of options we have for them this season,” says Gloria Canales, general manager of fashion at Amazon Mexico. “It’s the first time we [did this] in Latin America.”

The pop-up points to intensifying competition in Latin America’s e-commerce landscape, as retailers angle for the favour of both global and local brands. Amazon knows that discounting alone won’t fend off rival e-commerce giants Mercado Libre, Walmart, and Linio, the latter having expanded aggressively since Chilean retail giant Falabella acquired it for $138 million last year.

“[Our] fashion business is doubling every year,” says Mariela Censori, senior manager for fashion at Buenos Aires-based Mercado Libre. The segment makes up 20 percent of the company’s sales, but Censori says its potential for growth is high as it remains relatively untapped. The goal? “To become a strategic partner for top global companies developing their digital strategies.”

Mercado Libre is the largest e-commerce pure player in Latin America. With over 300 million registered users across the region and six thousand searches per second, it’s easy to see why sportswear heavyweights Nike and Adidas and cosmetic giants Estée Lauder and L’Oréal have chosen it as a local partner — and why Amazon has its work cut out to compete against this Latin behemoth.

Investing Big in Payments and Logistics

Brands can benefit from their years of experience in the region, localised logistics networks and payment solutions — common pain points for local and foreign contenders alike.

But Amazon hasn’t admitted defeat. This year, it opened a hundred thousand square metre distribution centre in Mexico, launched new services in Brazil, and is looking to inject $800 million in an Argentinian data centre. Meanwhile, Mercado Libre is fighting back by pumping almost $2 billion in the region next year. The plan includes building new distribution centres and upgrading logistics and payments.

It’s no surprise that payment solutions are a priority for both contenders. Almost half of adults in Latin America don’t have a bank account. “Implementing alternative payment methods in e-commerce can increase digital sales by up to 80 percent,” says Jaime Wu, manager of payment solution PagoEfectivo.

For its part, Chinese giant Alibaba Group has relied on its low prices to gain traction in the region, even when consumers have to wait between 15 to 30 days to receive their order. Last month, Wang Mingqiang, general manager of the group’s AliExpress cross-border platform told BoF that Brazil is one of its top global markets.

"Brands had been demanding it for a while,” says Carlos Jereissati Filho, chief executive of Iguatemi, of its online marketplace Iguatemi 365 that stocks brands from Diane Von Furstenberg to Ermenegildo Zegna. He adds that thanks to the company’s physical mall presence and integration with brick-and-mortar inventory brands “will be able to reach almost all of Brazil.”

We're committed to delivering inside São Paulo in a maximum of two hours.

According to Thiago Alonso de Oliveira, chief executive of JHSF Participações, the real estate firm behind Cidade Jardim in São Paulo and several other upmarket shopping malls across Brazil, “[our platform CJ Fashion] is more like a marketplace [as] our data is integrated to the inventory of the physical stores, so we know in real-time what products are available in which sizes, and so on.”

“Once the purchase is complete, we're committed to delivering inside São Paulo in a maximum of two hours. If it’s inside Brazil, 48 hours,” he adds. “And through the app CJ Concierge, our clients can demand brands that are not available on the online platform with the help of a personal shopper.”

Brands from Giorgio Armani to Elie Saab are sold on CJ Fashion. Oliveira says that “the platform is growing 20 percent monthly”. 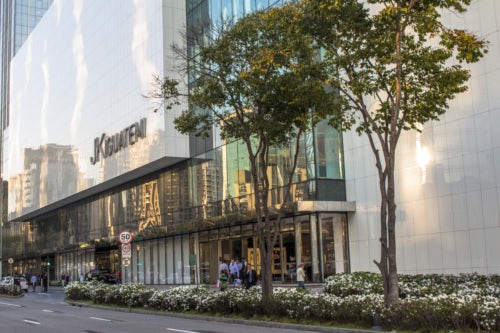 In addition to Oliveira and JHSF Chairman José Auriemo Neto and Jereissati of Iguatemi, there are other brick-and-mortar executives investing big in e-commerce

“For brands, it feels safer to be with us,” offers Juan Carlos Escribano, chief executive of El Palacio de Hierro, one of Mexico’s leading upmarket department stores. “They want a partner that explains how Mexico works, which times of the year are good and which are complex.” Earlier this year Escribano broadened their online offer of high-end labels to include Alexander McQueen and Loewe among others.

While local players dithered in the early years, foreign players like Net-a-Porter and others got a head start years ago. According to MatchesFashion’s Fashion Buying Director Natalie Kingham, the retailer has seen strong year-on-year growth in the region, with Mexico, Brazil and Puerto Rico leading the pack. “There is a very loyal customer base that is consistently growing.”

Though foreign players have the advantage of a broader designer and product range, there are things working against them like long delivery times, high shipping and return costs.  They must also tune in to unfamiliar shopping behaviour in the region too.

“In the US, speed is essential, [whereas] in China it’s the assurance of authenticity. When it comes to Latin America, especially in Brazil, flexibility [for payments] is crucial,” says Daniel Funis, VP of Farfetch Latin America who realised early on that offering the option to pay in instalments is key in the luxury market.

It’s a common misconception that instalments are for those who don’t have enough money to complete a purchase.

Farfetch’s F6 plan allows select customers to split payment into six instalments while on holiday. Local luxury e-commerce players Iguatemi 365 and CJ Fashion both provide the option of ten payment instalments. “It's important to operate with a local mindset and a global-local strategic framework,” offers Funis, adding that the company “has seen promising growth” since it launched in Brazil in 2011.

“It’s a common misconception that instalments are for those who don’t have enough money to complete a purchase. Even [affluent people in this region] pay in instalments,” says Joao Del Valle, COO and co-founder of Ebanx, a payment solutions company specialising in the Latin American market.

Some retailers working on their digital strategies have taken advantage of Latin America’s fast-growing smartphone market by launching their own shopping apps. This year, according to eMarketer, mobile e-commerce will account for more than one-third of retail e-commerce sales in Latin America — a share that will reach 40.1 percent ($40.2 billion) by 2023.

However, catching up with the mobile opportunity isn’t everything. Ceurvels believes that the ultimate winners will be those who offer the best omnichannel experience, as consumers increasingly research physically and buy digitally, or vice versa. 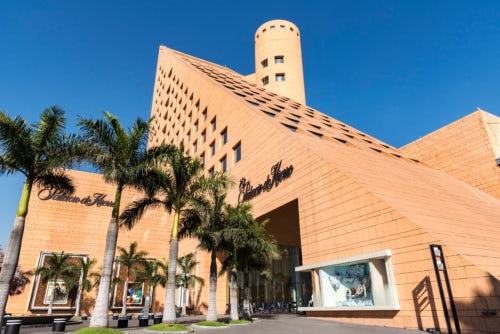 Iguatemi customers who shop online will be able to return items in-store, make use of special lounges and the mall’s personal shopping services, Jereissati explains. Meanwhile, El Palacio de Hierro’s team has made digitisation an integral part of their five-year expansion plan. “We’re aiming to create a seamless experience between the physical and online worlds,” says Escribano.

E-commerce in most Latin American markets is dominated by bricks-and-mortar retailers such as Falabella, Ripley and Cencosud. In Mexico, long-established department stores like Liverpool and competitors Sears and Sanborns have also jumped online. But many big incumbents are not innovating fast enough or developing their e-commerce arms with sufficient sophistication.

Because physical retail is still dominant in the region, long-established brick-and-mortar businesses tend to have an advantage when it comes to converting loyal offline customers to purchase online. Meanwhile, pure play e-tailers in Latin America are beginning to expand from clicks to bricks.

It’s no coincidence that Amazon decided to test a physical space in Mexico City, or that Brazilian direct-to-consumer fashion brand Amaro opened over a dozen physical locations — called Amaro Guide Shops — where customers can browse products and pick up and return orders. With over 1.5 million products shipped per year in Brazil, Amaro is one of the fastest growing fashion brands in Latin America and was founded by Dominique Oliver.

There is some optimism now that a trade deal between the European Union and South American trade bloc Mercosur (members countries are Brazil, Argentina, Uruguay and Paraguay) is underway. However, Latin America’s macro-economic landscape is still volatile and prone to political instability.

Argentina’s appetite for consumption has waned since the 2018 recession and uncertainty looms with a newly elected Peronist president, Alberto Fernández. Brazil has yet to reap the rewards of President Jair Bolsonaro’s recent market-friendly reforms and there is fear that some of Mexico’s recent policies will deter foreign investment.  Meanwhile, civil unrest has taken centre stage in Colombia, Bolivia, Ecuador and Chile as part of the so-called Primavera Latinoamericana protest movement.

But some experts suggest that e-commerce could be more insulated from social unrest than other sectors. “One would think that political instability would negatively affect e-commerce,” says Ceurvels of the current situation in Chile, “but in [some] markets with similar issues — such as Argentina or Venezuela — this has prompted e-commerce to grow at faster rates, rather than slow it down.”

Indeed, he notes, consumers are more mindful with their money in troubled times. “As a result, they go online to look for deals instead of going to a physical store… They’re in the comfort of home and avoid exposing themselves to possible protests and street violence.”

“Players understand what the opportunities for expansion are in the region,” Ceurvels concludes. “While it’s true the political crisis has impacted economic growth in the short term… [Latin America’s] solid consumer base will allow e-commerce players to see continued success in the long term.”