ZA’ATARI REFUGEE CAMP, Jordan — “And this is my spring collection,” says Abu Ala, a 44-year-old Syrian shopkeeper, gesturing at a wall of his pre-fab caravan hung with men’s t-shirts. “Brown, blue, honey, red… dark colours sell best. White, not so much.”

Sprawled across a wind-battered expanse of sand in Jordan’s Mafraq desert, Za’atari is temporarily home to 93,000 Syrian refugees who have fled the civil war that has torn their country apart. Many of them crossed into neighbouring Jordan on foot with little more than the clothes on their backs. The camp is also home to a who’s who of international aid agencies, and on the March day BoF visited, at least a dozen spring collections.

The main market street, playfully known as "the Champs-Élysées," is crammed with shops selling everything from falafel sandwiches to front-load washers and the clothes to wash in them. There are even two wedding dress hire shops, both owned by the same savvy entrepreneur. He buys dresses for 280 Jordanian dinars ($395) and hires them out for 15 Jordanian dinars ($21). With five to ten weddings a month, business is good — so good that the shops now stock cosmetics and accessories. 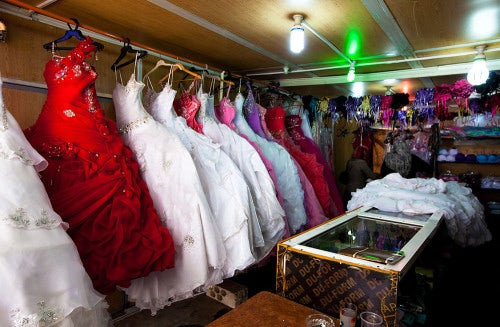 “All of the shops here are illegal,” says camp boss Kilian Kleinschmidt, a ruddy-faced German in head-to-toe khaki who works for the United Nations refugee agency, UNHCR. “Vehicles drive in here with goods, absolutely unchallenged by the police. No one pays for electricity.”

When Za’atari opened in summer 2012, savvy entrepreneurs hooked into the camp’s mains with miles of spaghetti-wire connections, creating an informal, illegal market for electricity. This free-for-all, plus access to a reliable road network, has accelerated Za’atari’s economy. Four months short of its second birthday, the camp sees around 9 million Jordanian dinars  ($12.7 million) change hands each month. “If you bring rocks here, you can sell them,” says 28-year-old Hadi, the owner of a shoe store.

Za’atari’s economy has grown with its population, but it has also tracked their mood. As the war next door has ground on with no end in sight, hopes for a speedy return to Syria have dimmed. Residents say they are growing used to the idea that they may be here a while. The variety of goods available, the way they are sold and the way people dress on the Champs-Élysées reflect this reality. 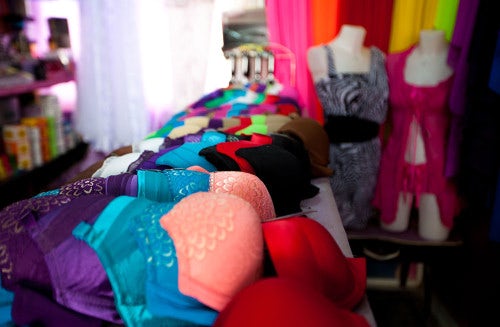 Abu Ala is one of the shopkeepers benefiting from this shift. He’s also driving it by stocking not just what people need, but what they want. “Lingerie sells best,” he says. “You can wear a t-shirt for four months, but you need to replace underwear.” But alongside the practical cotton briefs, he stocks sheer négligées and sparkly bras: “These are mostly for weddings.”

With minimal overhead — no rent, taxes or electricity bills — Abu Ala’s operation has grown from a single table to something closer to a mall — three pre-fab caravans in a row, selling lingerie, menswear and womenswear — in less than a year and a half. He grosses about 4,000 Jordanian dinars ($5,650) each month from his menswear store alone, and pays a handful of employees 15 Jordanian dinars ($21) per week. Business is good. 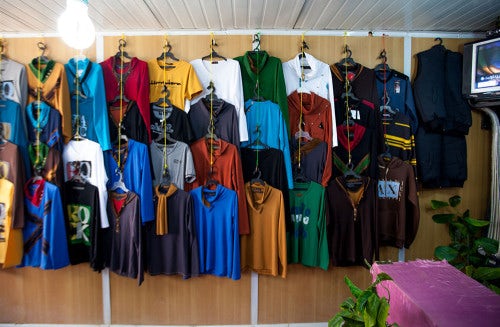 Young men are keen to wear fitted long-sleeve t-shirts in soft jersey, so this is what Abu Ala stocks the most. He also has a wall of preppy button-down stuff, lots of knock-off Burberry, and another wall filled with sporty tracksuit tops. Abu Ala’s advice for newcomers? “You’ve got to follow the trends. Syrians have changed the way they dress since arriving in Jordan. No more of these,” he gestures at his own baggy cuffs. “Now they like skinny jeans.”

Abu Ala’s price point is 20 percent lower than in Mafraq, the nearest city, which he says draws outside money in. “The guards and camp staff get their salary monthly and the first thing they do is buy clothes from my shop.” Abu Ala even has special customers who ask him to call them when he gets new stock. He does, every time.

Although he refers to a spring collection, Abu Ala’s stock is more daily than seasonal: he is constantly in start-up mode. Every three days he takes profits into Mafraq and re-stocks from Jordanian clothing sellers eager to get a slice of the Za’atari pie. He pays for what he sells on the next visit, and returns anything his customers don’t like. Abu Ala brings new stock into the camp in bags, by foot. If anyone asks, “It’s clothing for my five kids.” 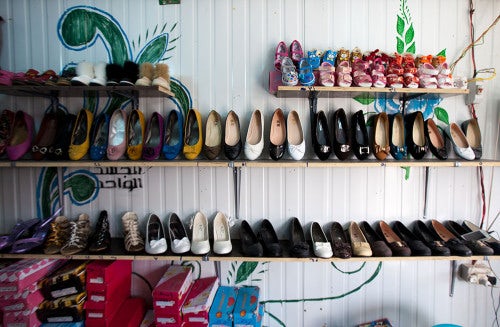 Rows of shoes against a caravan wall | Photo: Dustin Mennie

Down the road from Abu Ala, a handful of shoe stores steadily profit from one of the realities of living in the desert: shoes wear out fast here. A store devoted to “lightly used” trainers bought in Amman and smuggled out to Za’atari does OK, says its owner, Hadi. “Sometimes we sell, and sometimes we can’t buy cigarettes. It depends on how much money people have.”

But across the Champs-Élysées, a cheerfully painted caravan filled with brand-new women’s and children’s shoes is going strong. Inside the small, brightly lit space, shoes are set out in shelves nailed to the corrugated steel walls, adult shoes at head height and children’s shoes down where junior customers can see them.

Kleinschmidt’s observations about changing tastes and an increasing appetite for fashion are especially evident in Za’atari’s shoe market. Last summer, a below-the-ankle survey turned up legions of plastic sandals and little else. But these days there are flats, trainers and gladiator-type sandals. As more and more of the camp’s roads have been paved and made more walkable, footwear choices have changed. Stylish ballet flats are now practical as well as pretty, and the women who can afford them are buying. 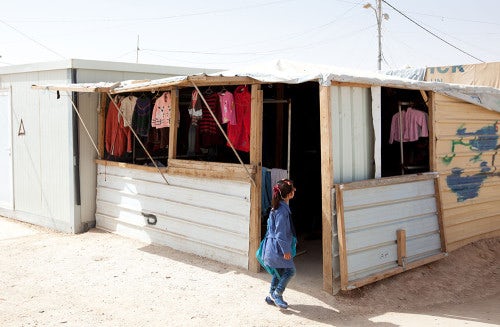 Not everyone at Za’atari has the money for new clothes and shoes. At the lower end of the market, Mansour Mohammed, a 47-year-old father of eight, runs Shaam Clothes — Shaam is a name for Syria — out of a stall made of metal sidings and little else at the start of the Champs-Élysées. There are no fitting rooms or mirrors, and the roof is a sheet of tarpaulin tacked to a frame of two-by-fours.

Mansour had polio as a child and needs a crutch to walk: he could never do any of the more mobile, physical work that is common at the camp. So with no previous experience in sales or fashion — he worked in telecommunications back home in Deraa, Syria — and about 280 Jordanian dinars  ($400) in seed money, donated by friends, Mansour bought his stall and his first lot of clothing, and a business was born.

All the clothing Mansour sells is second-hand or older. Both prices and profit margins are low: he sells between 50 and 60 items a month, and takes home less than 30 Jordanian dinars ($42). He’s also more vulnerable to changes in the market: when the NGOs that staff Za’atari distribute free clothing, Shaam Clothes takes a hit — a problem Abu Ala doesn’t have.

But like Abu Ala, Mansour keeps a close eye on what his customers want and stocks accordingly. “Jeans sell best,” he says. “And children’s clothes. But people don’t like white, it gets too dirty in the dust. Black, blue, red and green sell well.” 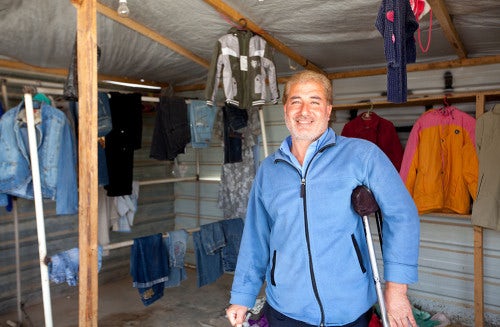 While Mansour admits business could be better, he’s confident he knows what works: “Look for the cheapest stuff and sell it for a reasonable price. People don’t have a lot of economic ability here.”

Mansour gets his stock from Irbid, a working-class city of about a million people in the north-west corner of Jordan. Irbid is where a good deal of European clothing goes for its next life: dealers import used British, German and Dutch clothing by volume, and then sell it on to retailers like Mansour in bulk: 200 jumpers for about 120 Jordanian dinars ($170); a little more than that for 120 pairs of jeans.

For any micro-economy to flourish, it has to function within a larger economy. For the Syrian clothing retailers of Za’atari, that larger economy is Jordan's. But few Jordanians can access the Za’atari market directly, because it is a refugee camp and not governed by the same laws that apply to the Jordanian workforce. On the flip side, few Syrian refugees — required to have a work permit from the Ministry of Labour, which can be difficult to come by — can operate in the Jordanian market without some form of Jordanian backing.

“The trick of it is that some Jordanian has to profit,” says UNHCR’s Kleinschmidt. “It’s a symbiotic relationship.”

BoF went into Mafraq to try to identify a Jordanian retailer with Za’atari connections. It wasn’t difficult.

“Ah, I have a shop at Za’atari!” exclaimed Abu Ali, the owner of the first clothing shop we walked into. “Well, it’s secretly owned by me,” he clarified, asking us not to use his real name in order to keep this secret under wraps. Increased competition at Za’atari led to clashes between Jordanian Abu Ali and other Syrian store owners, so he tries to play down his involvement. But he’s still profiting. 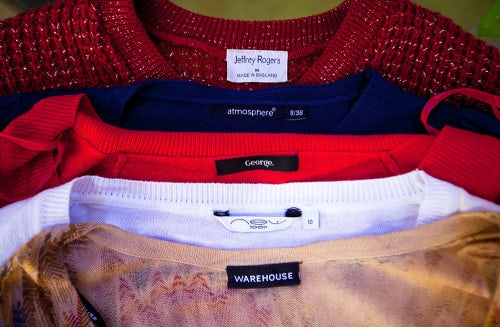 Abu Ali’s is a double-layer business: he buys used clothing in bulk in Irbid and Amman, at a place called Al Rsaifeh that’s known as Jordan’s main used-clothing sales hub. The clothing is billed as having come from Germany and Belgium, but a closer look by BoF revealed a plethora of British brands like Jeffrey Rogers, Warehouse and Topshop. He sells some clothing at his shop in Mafraq, and whatever doesn’t sell quickly gets packed into clear plastic bags and sent into Za’atari in a car with a permit to enter and exit the camp.

The trick of it, Abu Ali says, is to choose a good contact inside the camp. “You need your Za’atari employee to be smart and connected. They need to know the product and the market.”

In some ways, Za’atari is an entrepreneur’s dream: “There are no rules, no regulations, no government, no police.” Factor in the lack of overhead and it’s almost pure profit — for now.

But back at Za’atari, Kleinschmidt reveals that the camp’s wild west days are set to come to an end. UNHCR’s current electricity bill, in the neighbourhood of $500,000 per month, is unsustainable. The informal electricity connections are also unsafe. UNHCR will soon introduce electricity boxes that will replace the spaghetti connections to power mains. These boxes will limit the amount of energy shops can steal and measure the electricity they will have to pay for. It's an enormous step in the camp’s evolution from emergency mode to development mode, Kleinschmidt says. “Through electricity we are bringing in governance.”

It’s unlikely that the introduction of electricity meters will make a significant difference to the Za’atari marketplace, however. Stylish shoes, skinny jeans, dark-coloured t-shirts and wedding dresses are flying off the shelves. People are beginning to rebuild their lives out here in the desert, however temporarily, and, for the time being, profits are being made.

Sara Elizabeth Williams is a freelance journalist based in Amman. She specialises in conflict and the Middle East, and from July to December 2013, worked with UNHCR on a research project on Syrian refugees. Dustin Mennie is a freelance photographer and videographer focused on the work of NGOs and nonprofits.