Retailers Prepare for a Ramadan Season Like No Other. Again.

Traditionally a high point for retailers in the Muslim world and beyond, last year’s Ramadan season was decimated by the pandemic. Will this year be any better?

Retailers Prepare for a Ramadan Season Like No Other. Again.

Traditionally a high point for retailers in the Muslim world and beyond, last year’s Ramadan season was decimated by the pandemic. Will this year be any better?

“Ramadan here is usually bustling, you have so many shopping exhibitions and bazaars, literally every day you have multiple things going on,” she explained. “Each year we [normally] see a spike in sales for Ramadan.”

That was certainly the case before the pandemic. In 2019, monthly consumer spending on clothing and footwear in Saudi Arabia spiked at 4.8 billion Saudi riyals ($1.3 billion) during May. That was 73 percent higher than any other monthly figure in 2019, according to the Saudi Arabian Monetary Authority (SAMA), which tracks point-of-sale transactions by sector.

But when Covid-19 hit last year in the lead-up to Ramadan, retailers like Abukhadra were forced to think fast or relinquish the most lucrative sales period of the year.

Having only just launched an e-commerce offering with a limited assortment of the Arab designers and Middle Eastern creatives Homegrown Market stocks, she moved quickly to put 50 percent of the store’s products online in a matter of weeks.

Her website wasn’t the only channel Abukhadra doubled down on, as curfews and lockdowns swept through Saudi Arabia. She also took orders via Whatsapp and Instagram direct messages, sending clothes out to clients to try on in their homes.

“That actually saved us and it saved our designers,” Abukhadra said, adding that she was shocked at the level of demand considering she “wasn’t expecting any sales at all.”

“The week right before Ramadan and the actual Ramadan, when there was a lockdown, the sales were very high, people were putting in orders, it was crazy. Sales may not have been as high as they normally are, but they were still quite good given the circumstances,” she said.

Abukhadra’s story will sound familiar to retailers throughout the Muslim world in the lead-up to the holy month of Ramadan, which this year is expected to begin on the evening of April 12.

There will of course be the same spiritual reflection, fasting and prayer, but the traditional climax of celebrations for the festival of Eid al-Fitr will remain restrained this year.

In the second year of the pandemic, there’s no lockdown to contend with in Saudi Arabia and Abukhadra’s customers are able to return to her store, though they must abide by social distancing restrictions. The bazaars and shopping exhibitions that Homegrown Market would normally participate in leading up to Ramadan remain off the table, but she does now have a much more robust e-commerce operation.

All-in-all, Abukhadra is hopeful that this year’s Ramadan season will be better than last year, though she’s not certain it will be as strong as a normal year pre-pandemic. “I think it will be close,” she said. “People are more excited to shop and buy more than one thing, partly because they didn’t get to do that last year.”

According to Edward Sabbagh, Farfetch Middle East’s managing director, “essentially, we don’t expect life to be back to normal [for Ramadan this year as] gatherings will be limited to families and really close ones.”

Most retail watchers in the Arab world consider the prospect of sales that approach a normal year as the best-case scenario. Few are confident of a blockbuster performance.

“I expect this season of Ramadan will be less fruitful than the normal years, but definitely better than last year because retailers have the Covid protocols under control, consumers are more comfortable to go out and most of the retail shops are now open, though that varies by country,” said Abdellah Iftahy, a Dubai-based partner at McKinsey.

In Dubai, a regional retail hub, malls are open for business and an aggressive vaccination campaign has given local residents confidence to get out and about, but the Emirate is still suffering from a lack of international tourists, including those from neighbouring countries, who would normally travel there to shop.

Tourist spending in the pre-Ramadan period is also likely to be missed by European shopping centres, which will again miss out on the “Ramadan rush”, which, pre-pandemic, saw wealthy Middle Eastern shoppers descend on cities like London in the lead up to the holy month.

Southeast Asian Muslim-majority nations like Indonesia and Malaysia, meanwhile, were hit quite hard by the pandemic, with both countries subject to reactive and changing lockdowns. That made last year particularly stressful for consumers in these countries, compared with neighbours like Vietnam, said Hemanth Peyyeti, a partner at Kearney based in Singapore.

“The last Ramadan was during the early months of Covid-19 — a period of confusion and fear. Customers were shifting into a new normal. A lot of brands hadn’t adapted yet, some were quick out of the blocks but most weren’t,” he said.

This year, things are likely to be different, with Peyyeti describing the leading indicators for shopping and spending in categories such as beauty and personal care in Indonesia and Malaysia in March and April as “buoyant.”

“The Ramadan festival has always been a time when people look to move forward with a positive attitude and that’s the same attitude consumers are approaching this year’s festival with,” he added.

Certainly, fashion brands have been leaning into the Ramadan period, with luxury players such as Dior and Prada releasing special collections.

Even more focus than usual has been placed this year on the curation of Ramadan edits on fashion e-commerce platforms, from Net-a-Porter to ultra-fast fashion player Shein, which is unsurprising given the one thing many are certain of when it comes to the upcoming shopping season is that more of it will happen online than in any pre-pandemic year.

With young and incredibly connected populations in much of the Arab world and Southeast Asia, Iftahy and Peyyeti agree that the shift to e-commerce was already primed to occur before the pandemic struck, though there’s no doubt months on end of staying at home also helped move the needle.

Even in retail fashion hubs like Dubai, with its diverse and robust brick and mortar infrastructure and a cultural predisposition for shopping as a leisure activity, it’s likely the shift to online shopping will remain to some degree.

In the broader e-commerce market, online sales in the Middle East and North Africa (MENA) region are now expected to exceed $50 billion by the end of 2022, up from the previously estimated $26 billion, due to Covid-19. According to a study by Dubai Economy, the United Arab Emirates is currently the most advanced e-commerce market in the region, with an estimated annual growth of 23 percent between 2018 and 2022.

At Farfetch, Edward Sabbagh declined to disclose specific growth figures for the Middle East region in 2020, but he did say there was 49 percent growth for the platform globally last year and little “material difference” between markets in the Middle East, which have all seen consistent growth. 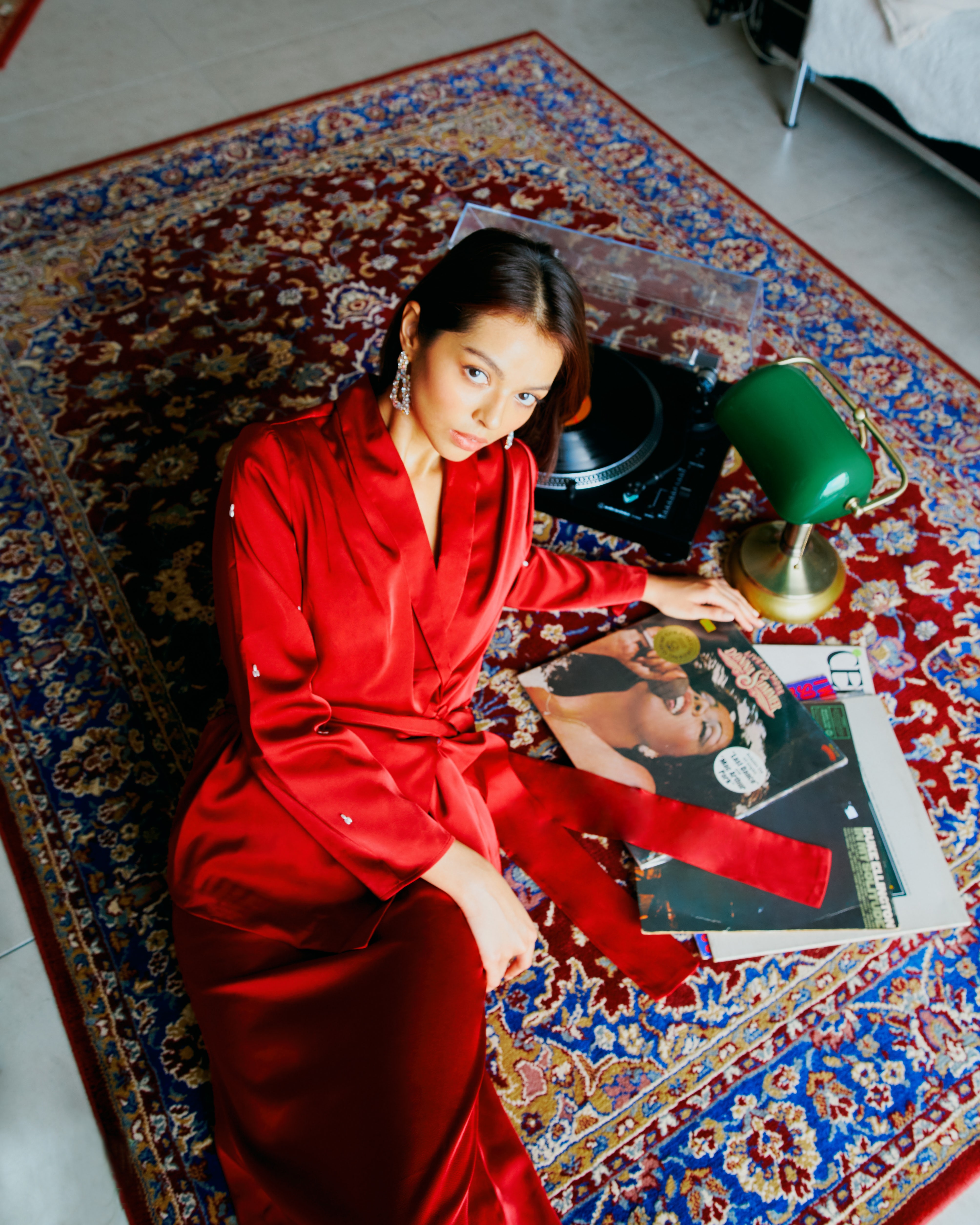 A look from Zalora's Zaloraya selection of modest wear. Zalora.

For its Ramadan edit this year, the platform has partnered with 30 brands on 30 exclusive capsule collections, with international brands such as Oscar de la Renta, Carolina Herrera and Marchesa joined by local designers like Bambah, Shatha Essa and Baruni.

“We’ve seen very strong engagement in the Middle East already and Ramadan hasn’t even begun yet, but we’ve also seen engagement and sales around the world, in the US, UK and many other places, which really shows this global reach of modesty [wear],” Sabbagh said.

In Southeast Asia, Zalora, a fashion platform that receives over 50 million visits a month and has over two million active customers, said its pre-Ramadan sales period at the time of writing has seen a 13.9 percent increase in net merchandising value and a 14 percent increase in items sold compared with the same period in 2020. However consumer behaviour still speaks to a cautious attitude.

“Customers [tend to] select pieces and styles that can be mixed and matched with their existing wardrobes – because even though in-person gatherings and events are resuming, attendees are approaching these with caution, [and] flexible fashion choices will allow them to adapt easily, whether it is a celebration at home, or in a public setting,” said Gunjan Soni, chief executive of Global Fashion Group-owned Zalora.

In a still uncertain world, no one knows exactly what to expect from this year’s Ramadan period, but for consumers and retailers alike, cautious optimism abounds in regions that depend on this festive period most for an economic boost.

Gulf Retailers Will Suffer During Ramadan 2020