ST. PETERSBURG, Russia — Russia is going through its most patriotic moment in a generation. On the heels of armed intervention in Syria, Vladimir Putin's approval rating recently rose to a record 90 percent. At the best restaurants in Moscow and St. Petersburg, chefs now brag that they are revisiting traditional Russian dishes, using 100 percent Russian ingredients. Then they quickly add that the latter have been made a lot more common due to international sanctions against the country.

In the realm of fashion, too, Russia is now showing a clear desire to back its local industry. For the first time in recent memory, a host of government organisations have unveiled a series of development programmes for the industry. Some were revealed in the first three quarters of 2015, but more were announced at last month’s Mercedes-Benz Fashion Week Russia event in Moscow.

They include supporting and exhibiting very young designers, providing working space and offering subsidies to manufacturers for production. In St. Petersburg, low-interest loans are reportedly now available for small fashion businesses based in the city.

Russia's second largest city has so far been the centre of this new push, although Moscow remains the undisputed fashion capital. There is a concerted national effort to connect the country's high-end designers with its local producers, and St. Petersburg is becoming increasingly important in this network. Indeed, a satellite event by Mercedes-Benz called St. Petersburg Fashion Day now operates in the city.

“St. Petersburg has always been well-known for its contributions to fashion — since forever,” says Elgiz Kachaev, chairman of the committee for entrepreneurship and consumer market development in the city government of St. Petersburg. But, “recently we have been supporting the industry in a number of [new] ways... including supporting local designers and providing a range of subsidies.” 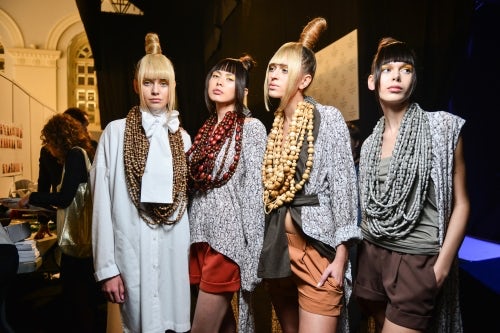 On St. Petersburg's main retail boulevard, Nevsky Prospect, the city government recently rented a space for 35 small-scale designers in a central shopping centre. This promotional project called Showroom #35 involved millions of roubles of public investment, says Kachaev, but the broader goals are much bigger. The government would like designers to buy more Russian textiles and do larger-scale production, here, at home in Russia, he says.

As it currently stands, many Russian designers rely on small, in-house production and often import materials from abroad.

Designer Natali Leskova, from St. Petersburg, says that finding local manufacturers in Russia is tough and that “there is a lack of field specialists [like seamstresses, constructors, cutters, PR and sales managers] and trouble with fabrics,” so she imports fabrics from Italy, France, and Asia. However, support from the government “is getting better each year,” Leskova says, citing government sponsorship of a stand at a trade fair during Milan Fashion Week in September that was particularly helpful for her business.

The fashion market (clothing, textiles and footwear) is the second largest market after the food market in Russia, with a volume of about 3 trillion roubles ($46 billion), according to a study by Romir Research and the Russian Fashion Council. Local players believe the scale paints a clear picture of an opportunity to expand the national industry.

Currently 70 to 75 percent of textile goods, including clothes and accessories sold in Russia, are foreign-made, says Alexander Shumsky, president and founder of Mercedes-Benz Fashion Week Russia. About half of these are estimated to be imported or distributed through black market channels, he adds.

Meanwhile, data presented by the federal government indicates that 65 percent of Russians are now favourable to buying Russian consumer goods. The figures were revealed as part of a partnership announced during the recent fashion week, between the Russian government, Russian brands and AliExpress, a unit of the Alibaba ecommerce giant. which is widely used in Russia. They plan to feature up to 100 brands on the site, marked “Made in Russia” with the local tricolour of the flag.

“We believe there will be a significant increase in demand for Russian merchandise sold via Internet stores,” says Viktor Evtukhov, state secretary and deputy minister of industry and trade of the Russian Federation.

Alongside the runway shows of well-established local designers like Alena Akhmadullina and Bessarion (in Moscow) and Slava Zaitsev (in St. Petersburg), a number of programmes during fashion week hoped to give local designers a significant leg-up. 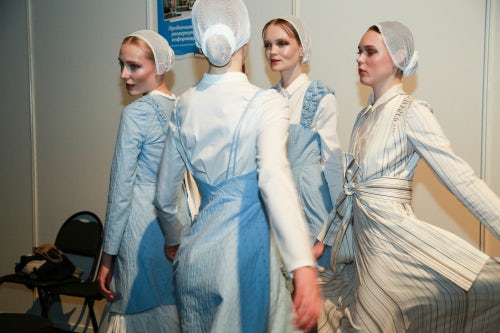 Russia has fallen under hard economic times in the last few years. The energy exporter has been hit hard by the fall in the price of oil and sanctions imposed after conflicts over Crimea and Eastern Ukraine. In dollar terms, the rouble is worth approximately half of what it was just two years ago, and the IMF forecasts that the economy will shrink by 3.8 percent in 2015.

“In September, Russian spending sunk another 40 percent year-on-year against a background of an 18 percent increase in the global tourist spend. It used to be that the Russians were credited to be worth about 4 percent of the global luxury goods market, half purchased at home and half abroad. [But] I think it is fair to say this must have reduced to [a total] of between 2 and 3 percent, and that the bulk of that, around 80 percent, must be now spent be in Russia,” he explains.

Solca adds that Russian brands have a better chance selling in their home market since distribution is less of a handicap than in the past.

According to Shumsky, as federal support grows for import-substitution regimes, certain fashion categories stand to benefit. A Russian export tariff on raw leather, for instance, has successfully forced the more value-added refined leather refinement industry inside Russia's borders. Similar policies could be implemented to develop the local fashion industry, he suggests.

While other Russian industry figures welcome the spirit of many of the new initiatives, few seem confident about what their long-term impact or scale might be.

Anka Tsitsishvili, who co-founded and owns the Moscow store IndexFlat, says that so far — to the extent that local fashion exists — it is due to consumer admiration, not government action.

“If you work hard and you have fresh ideas, there are many places where young designers are supported,” Tsitsishvili says, pointing the fact that her boutique exclusively features emerging designers from Russia and other former Soviet Union countries, such as Georgia and Kazakhstan.

Tsitsishvili believes that government support is still woefully lacking. She says that what is needed is “serious, high quality production within Russia, as well as agreements making shipping to other countries easier. The interest in our designers is always growing, and there are stores outside of Russia and [the other former Soviet states] who like [our] collections but they are not sure about Russian quality, and there are difficulties with logistics.” 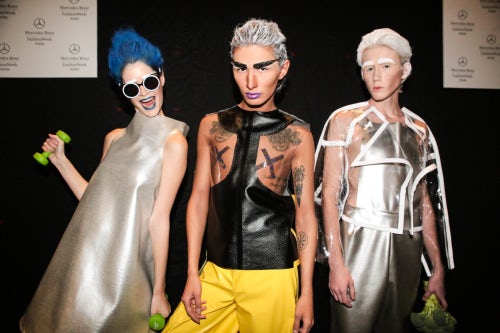 At the acclaimed St. Petersburg concept store Babochka, general manager Hatulia Avsadjanashvili says she is an enthusiastic supporter of Russian designers — but not simply because they are from or made in her country. Alongside dozens of the more obvious international labels at the multi-brand boutique, like Valentino, Chloé, Céline, only a small minority of three — Alexander Terekhov, Vika Gazinskaya and Walk of Shame — are Russian.

“When I add Russian designers to my merchandise, I don't separate them out by nationality. I never would. I add them because they have created contemporary, interesting collections that mix well with other designers here. I also think many have the talent to sell abroad [so] I do really hope and believe that Russia will develop its own capable textile industry,” says Avsadjanashvili.

According to both government officials and event organisers, one of the biggest hurdles to overcome is simply connecting the talented designers with the production facilities that do exist, and getting them attuned to each other's needs.

“We have well-equipped factories around the country. The Russian Fashion Council [founded last year] is working hard now to connect designers with them,” says Shumsky, who adds that designers try to do too much themselves and often don't know that high-quality producers exist within other areas of Russia, outside Moscow or St. Petersburg. What’s more, he adds, “these Russian manufacturers need the creative force designers can provide. They have their own in-house brands, but they aren't hugely successful and they could really benefit from the creative partnership.”

Anna Kozlova, one of the designers behind Moscow-based brand SOL' Designers says that such encounters are crucial. “Just last week, we participated in a roundtable organised by the Russian Ministry of Industry and Trade where designers met producers. This was an important step.”

Whatever negative effects international sanctions may be causing some members of the Russian fashion industry, others believe that a few positive developments may never have happened if it weren’t for the pressure they have exerted.

“In reality, sanctions have created lots of local opportunities,” says Shumsky. “Just recently, manufacturers were not interested in Russian designers [and] the government was not interested in supporting this industry either. Very quickly, that is changing.”