NEW YORK, United States — New York fashion is said to strike a balance between commerce and creativity. With few exceptions, New York designers tend to prioritise practical concerns like wearability over more frivolous concerns like the so-called wow factor. On the surface, this seems like a sound business strategy. But when designers focus too much on the practical and are obsessed with being on-trend or with what their peers are doing, everything ends up looking, well, kind of the same.

Sophie Theallet, the French-born American designer based in New York, does not have this problem. Theallet creates clothes with a distinctive mix of sophisticated wearability and refreshingly untrendy luxury. Unlike other designers who look for aesthetic inspiration from visual archetypes or vintage clothes, Theallet, who claims to not have a specific muse, designs with a more soulful, introspective process.

"My aesthetic approach is simple: I design what I feel in my heart and mind," she explains. Inspired by the enduring styles of designers such as Jeanne Lanvin, Yves Saint Laurent and Gabriel Chanel, she insists: "A beautifully executed garment, both in design and in workmanship, does not need to be bounded by trend. It is profoundly my style and my way of seeing things and it naturally became our business model." 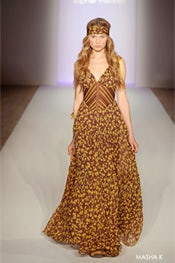 Combining this deeply personal approach with a quintessential French sensibility gleaned from her days working with two of world's foremost couturiers, Jean Paul Gaultier and Azzedine Alaia, Theallet's fledging label has concocted a recipe that is showing the early signs of success.

Encouraged to start her own line by the late retailer Janet Brown, whose eponymous store many considered to be as influential as the larger department stores, Theallet launched her label in 2007, when it was quickly picked up by Barneys New York. Now, Forty Five Ten in Dallas, Blake in Chicago, and Jeffrey carry Theallet's collection in the US, and it also has international distribution in choice retail doors in Kuwait and London.

One reason for Theallet's breakaway success has been that she has struck a chord amongst discerning fashion tastemakers, whose support can help a young fashion brand rise above the thousands of emerging labels around the world.

First, there was the American Vogue profile last June, which was no doubt precipitated by regular attendance at Theallet's shows by the magazine's powerful editors Sally Singer, Hamish Bowles, and Grace Coddington. They were joined by the industry's two most important fashion critics, Suzy Menkes and Cathy Horyn, who were clearly paying attention to the French expat's uniquely untrendy designs. And, earlier this year, Michelle Obama single-handedly put Theallet on the global fashion map when she wore the designer's black berriboned dress to an April unveiling of a Sojourner Truth sculpture in Washington D.C.

Despite the considerable editorial attention and early success with retailers, Theallet's husband and business partner, Steven Francoeur, knows that there is a long road ahead before they have a sustainable business. "Unfortunately, the big fashion groups have so much financing, and it is difficult to compete being independent," he says. But rather than accepting defeat, the husband and wife duo, who got their lifeline from a "small family investment," remain both proactive and patient.

Though the company would benefit from a business partner, they are looking for someone "who understands our business model," says Francoeur. Ultimately, he wants to help grow Sophie Theallet's unique vision — on her own terms.

Robert Cordero is a Contributing Editor of The Business of Fashion.