KARACHI, Pakistan — “I don’t care for fashion week runways,” shrugs Sania Hayat, a 25-year-old woman living in Dubai, “although I do love fashion.” This may seem like a confusingly contradictory view but it is one that Hayat shares with many other women across the Orient who feel that international fashion brands don’t often speak to their needs.

In the Middle East, South Asia and South East Asia, many urban women regularly fill their wardrobes with a mix of local and international designs. Western fashion has certainly made a big impact on avid fans of high-street and luxury brands in many of these dynamic emerging markets, generating big business for global brands.

Yet women in many communities still prefer wearing silhouettes based on long-lasting cultural and religious codes for which most Western brands simply don’t cater. Indeed, traditional garments like the abaya, sari, shalwar kameez, hijab and jilbab still make up a very large proportion of clothing sold across the region.

Although she would happily splurge on a long overcoat from Chanel or luxury brand accessories, Hayat finds the majority of runway collections irrelevant for her interpretation of modest dressing. However, one luxury label that does regularly capture her interest — and therefore a growing slice of the market — is the Austrian crystal maker Swarovski.

Unlike the distinctive forms of ready-to-wear, Swarovski crystals mould themselves to any garment shape or silhouette. In the predominantly Muslim Middle East, Malaysia and Indonesia, for instance, the crystals are popular embellishments not only for gowns and dresses but also for high-end designer-created abayas and headscarves. According to a recent Reuters report on the state of the global Islamic economy, Muslim consumers’ clothing consumption is estimated to be worth $18 billion in the UAE, $14.7 billion in Saudi Arabia and $12.7 billion in Indonesia 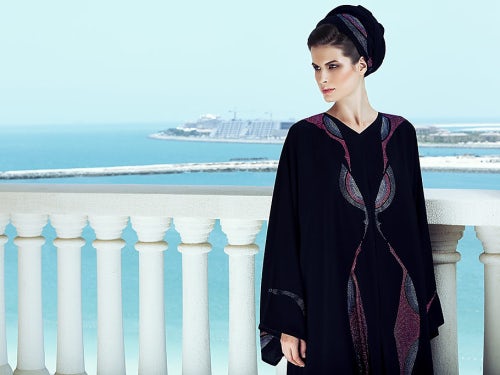 “Swarovski crystals dazzle and can step up a simple abaya, transforming it into high-end fashion,” observes Alia Khan, chairwoman of Dubai’s Islamic Fashion Design Council. “A Muslim woman can attend a wedding wearing it and feel as glamorous as everyone else, without compromising on her chosen values.”

In India and Pakistan, Swarovski waltzes a similar balancing act as it latches onto the lucrative market of bridals and traditional-wear. The market for ethnic-wear in India, running the gamut from saris to lehngas and the shalwar kameez, is growing at an annual rate of 8 percent and is expected to reach $19.6 billion by 2018, according to a report by Indiaretailing.com. The traditional bridal lehnga, with its penchant for bling, presents an ideal canvas for Swarovski detailings.

Having gained a stronghold across India over the last two decades, Swarovski collaborations also frequently veer towards Western silhouettes that are increasingly popular in Indian cities. But what makes Swarovski so tantalising to these diverse markets across the Orient?

The quality of the embellishments is one undeniable factor. Swarovski is a global big gun with a legacy of blinging up fashion for more than a century, so designers and customers are naturally attracted to the prestige attached to the brand. Further augmenting the firm’s popularity is its many local designer collaborations supported by assertive marketing strategies.

“When it comes to design, we can say that Europe offers form, while the Middle East, India and Pakistan offer a wide variety of surfaces,” says Flemming Nielsen, Swarovski’s vice president of operations in South Asia. “It has been a great challenge to nurture future craft clusters in the Middle East, which has young demographics, resilient economies, a global outlook and growing purchasing power. The emerging markets in South East Asia have similarly become more fashion-driven in recent years. Swarovski hones in on the talent gaining strength in these regions and proceeds to collaborate with them.”

The strength of such collaborations was felt at last year’s Swarovski Sparkling Couture extravaganza in Dubai. Thirty-five brands traversing South Asia and the Middle East showcased designs embellished with crystals, crystal mesh, crystal fabric and hotfix stones from Swarovski. In addition to Western silhouettes and accessories, there were abayas, headscarves, bridal angarkhas, lehngas and the Arabian mukhawara.

Swarovski’s managing director in the Middle East, Andrew Mojica, explains that innovation comes through such local experiments and the freedom that the firm grants. “When we work with designers, we never impose upon their individual ethos.”

“The West is increasingly looking towards the East for inspiration and at the same time, Asian designers are leaning towards expanding their businesses in the West,” he adds. “Swarovski represents affordable luxury and by teaming up with creative local brands, we can improve standards of embellishment and define trends for the future.”

Saudi women want to set themselves apart and they often do this by personalising their abayas with crystals.

The Swarovski-infused abaya is one such trend that has risen against the odds. “In some parts of Saudi Arabia, government regulations dictate that the abaya should remain discrete and restrained,” explains Hani Al Nakib, the owner of Al Shal, a brand that is popular for its Swarovski embellishments on abayas. “Despite these impediments, we’ve observed that Saudi women want to set themselves apart and they often do this by personalising their abayas with crystals.”

Similarly in Malaysia, where the tudung headscarf is an important fashion accessory, upmarket brand Bawal creates Swarovski-encrusted collections that are highly coveted. Frequently spotted on local celebrities and royalty, the scarves’ loyal customer-base is happy to pay the brand’s considerably high prices, which can rise to about 1,000 Ringgits ($250).

Bawal’s owner, Haliza Maysuri recalls how sales rocketed when she started using Swarovski crystals 14 years ago. “In the beginning, our headscarves were not embellished and we were facing difficulty in moving stock. We incorporated Swarovski embellishments to make our scarves more unique. It assured our customers that they were buying a premium product and since then, we haven’t opted for any other embellishments,” she says, citing their diverse offering and durability as well as access to the firm’s design consultancy and R&D facilities.

“It’s always a two-way street,” says Mojica. “Designers stand to gain from our quality-control and guidance. We, in turn, reach out to our target market and create brand awareness by associating with popular design labels within a region.”

Expansion in new and old markets

It is a business strategy that has worked well for Swarovski in India for two decades and is now helping it gain a foothold in Pakistan. Indian designer Suneet Verma, who has long had a predilection for heavy smatterings of crystal, recalls Swarovski’s entry into the Indian market.

“From the very onset, Swarovski ingeniously tied up with designers of apparel, shoes, bags, jewellery and interiors. There is still a large segment of the market that prefers less expensive, substandard bling but that rings true for customers across the spectrum of apparel and accessories. Regardless, when it comes to high-end couture, my clients have often specifically asked for Swarovski, sometimes even requesting for the authentication tag to go with the clothes.” 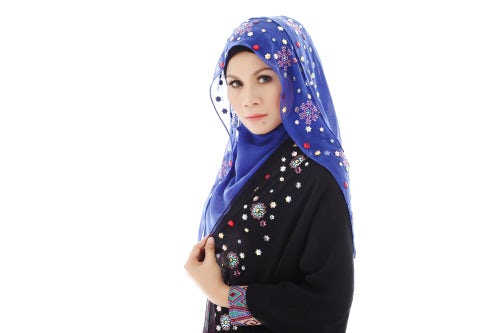 By contrast, Swarovski has only just taken fledgling steps in neighbouring Pakistan, where it launched in 2014. Notwithstanding the country’s fluctuating economy, Nielsen remains optimistic. “Pakistan is very promising and rising fast. The market is increasingly refined, consisting of customers who are sophisticated and well-travelled. At this initial stage, we are establishing credentials and building content. It’s working well so far.”

Last year, the country’s high-street heavyweight Khaadi incorporated Swarovski detailings in its line-up of unstitched cambric and this March, the brand fused their ready-to-wear with the crystals at a local fashion week. “We only included the Swarovski elements in our premium line which is slightly more expensive,” explains Khaadi’s chief executive Shamoon Sultan, who remains enthusiastic about the crystals despite the cost.

While younger Pakistani designer labels like Khaadi and Maria B are eager to embrace Swarovski’s innovation, the old guard can be much more reluctant. The country’s leading bridal couturier Bunto Kazmi points instead to indigenous embroideries from the region. “We have a vast heritage of [our own] exquisite craft that adds beauty and bling to our designs [like] dabka, resham, gota and sacha kaam in naqshi, among others, painstakingly stitched onto cloth,” she says.

However, Kazmi does admit that infusing Swarovski to some of her designs brings a certain dazzle. “Their superior quality is unquestionable which is why, when required, I do use them. However, they’re never the focal point of my designs.”

Herein lies the key to Swarovski’s success in the region: the embellishments are versatile enough to glimmer in a designer’s most elaborate showstopper or they can subtly complement other decorative techniques.