HONG KONG, China — It was a fashion spectacle of stratospheric proportions; one that made Kim Kardashian’s Forte di Belvedere wedding look demure and rivalled the pompous ceremony of Prince William and Kate Middleton, the Duke and Duchess of Cambridge, who wed in London’s stately Westminster Abbey.

When Chinese actress and model Angelababy married actor Huang Xiaoming last October, she donned a custom-made Dior dress that took half a year to create, as well as two more haute couture gowns from Elie Saab. A $1.5 million five-carat diamond ring by Chaumet graced her finger, and the 2,000-strong guest list oohed and aahed as the couple exchanged vows and later cut a 10-foot tall carousel-shaped wedding cake.

The estimated cost of the lavish affair totalled $31 million, far outstripping Mrs. Kardashian West’s $12 million ceremony and putting it nearly on par with the British royal wedding, which came to a sum of $34 million.

In January 2015, another celebrity wedding lit up the Internet in China: the marriage of Taiwanese singer Jay Chou to local model Hannah Quinlivan. Not content with just one ceremony, the superstar couple first married in a North Yorkshire cathedral, then celebrated again in Taipei, before holding another wedding in Australia’s Gold Coast. 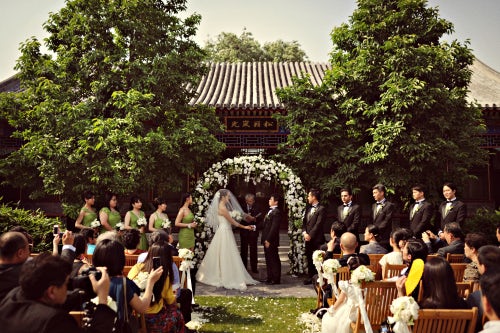 2015 was certainly a hallmark year as far as weddings go for Chinese power couples, and in many ways, signalled the potential of China’s burgeoning wedding market. While neighbouring India is home to an eye-watering bridal scene of its own, many Indian couples are steeped in their own wedding clothes traditions. China, on the other hand, presents a more immediate opportunity for foreign brands offering wedding attire.

Thanks to the influence of Hollywood and the vacuum left by the Cultural Revolution, the Chinese are remarkably open to adopting some of the West’s traditions for their fairy tale wedding day, readily adapting and blending them with their own customs and rituals. The result is a giant wedding market in China, which analysts estimate to be worth between $50 billion to $80 billion.

According to the China Wedding Industry Development Report, the average Chinese wedding costs $12,000. This still lags behind more developed markets, but is exceptionally high in proportion to the average annual wage, which for urban dwellers was $8,900 in 2014, government data showed. In comparison, the average US couple spent $26,444 on their wedding, according to the Wedding Report, just under half of the median annual salary of $53,657, according to 2014 US Census Bureau data.

There are multiple factors at play for the high spend but the strongest contributor is the nation’s one-child policy. Although the rule was abolished from January 1, it was instated 38 years ago, which means that many engaged couples today are only-children. In a country where weddings are very much a family affair, not only are the two sets of parents from either side contributing money to a single wedding, four sets of grandparents may be as well.

In a way, wedding guests help to pay for the celebrations too. Instead of a wedding registry, it is tradition to give newlyweds hongbao, or red packets stuffed with cash. Often, the total amount of money received can cover a significant share of wedding expenses or more.

Indeed, it is not uncommon for couples to even make money from their wedding. Hongbao money often drives couples to host multiple ceremonies, and consequently, the need to buy even more dresses. It typically takes the form of one ceremony for the couple’s own friends, perhaps at an exotic destination, and then another ceremony in their hometown to satisfy their parents and parents’ friends. 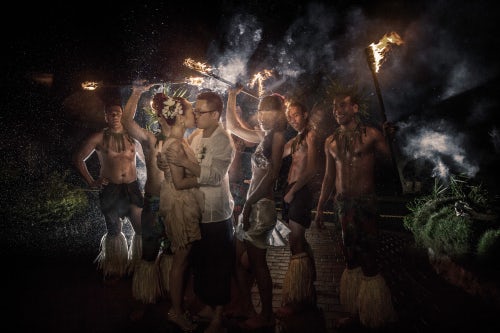 While China's recent economic downturn and anti-corruption efforts have been a drag on the country’s luxury spending, wedding-related businesses have proved to be resilient. The Communist Party recently issued vague guidelines for its members on the level of lavishness it considers appropriate for weddings, but a surging middle class is likely to remain. Management consulting firm McKinsey & Co. forecasts that by 2022 over 75 percent of China’s population will be classified as middle class, up from 4 percent in 2000.

Kent Wong, managing director of Chow Tai Fook, a leading jeweller in China with over 2,300 stores in the mainland, says it has proven to be a bright spot for them amid a slowing macro environment.

“What we can see is that bridal jewellery has a very stable performance, even in very challenging times,” says Wong. “It makes sense because it’s a kind of custom for Chinese people to buy jewellery when they marry or even for gifts to relatives and friends [for their wedding].”

Gold remains the metal of choice for Chinese brides but Chow Tai Fook and many other jewellery brands are working on introducing platinum, diamonds and coloured gemstones to couples as well.

In a 2014 report, De Beers said China would be the main driver for world diamond jewellery demand in the medium term. “Sales of diamond jewellery to Chinese consumers were the fastest growing in the world over the last decade, with a compound annual growth rate of 21 per cent from 2003 to 2013,” it said.

David Liu, co-founder and chairman of XO Group, which runs US-based bridal site TheKnot.com, launched its Chinese equivalent Ijie.com in 2012. He explains that in the past, a Chinese wedding was essentially a big dinner party, but it has since transformed into a hybrid event with many Western elements.

An officiant is swapped out for an emcee. There is rarely dancing but guests are treated to elaborate entertainment acts, such as fire-breathers or a Sichuan style mask-changing show.

“In the seventies, back then, there was no such thing as a diamond engagement ring. Today, that’s a tradition the Chinese have embraced. Certainly even 10 years ago, no woman wore a white dress for her wedding,” says Liu. “They’ve adopted the honeymoon. That’s an additional cost.”

According to Matthew Anderson, chief executive officer of British bridal and eveningwear brand Jenny Packham, the past five years has been “significant” in developing the brand's presence in the market. “Last year, Jenny Packham launched an exclusive edit of petite bridal gowns catering to the Asian market,” says Anderson. The brand has also designed a special collection for the region in red, the traditional colour of weddings in China symbolising good luck. 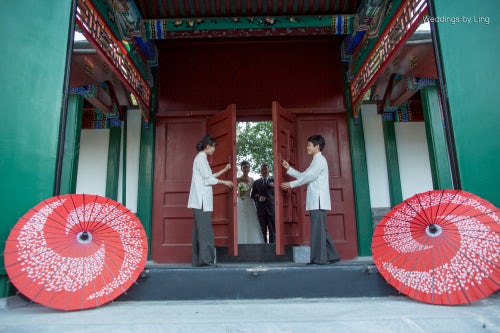 A distinctive feature of a modern Chinese wedding is the bride’s approach to the dress. For western brides, it’s about finding the dress. In China, however, it is a matter of finding three, four, or even five gowns — although some are usually rented.

“It’s a volume game. It’s hard to wrap heads around the size of the market. Less than 10 percent of women buy a dress in China but the number does exceed most [country] markets,” says Liu.

A typical Chinese bride starts her day in a traditional Chinese qua, an opulent red and gold phoenix-embroidered dress, for the tea ceremony, during which the couple pays respects to the parents. She changes into a white dress for the ceremony itself. The reception usually sees another outfit or two — a second western-style evening gown and a qipao.

That’s just for the wedding day. There is also the matter of pre-wedding photos; an elaborate shoot will be taken ahead of the ceremony, involving various attire changes rented from the photo studios. The photos, which are printed on the invitations sent out to guests, are a big money maker, Lin says.

“Three or five years ago the couples did it in a studio, but right now, the trend is to go overseas to have the pre-wedding photoshoot,” she continues. “Europe, especially France, is the most popular destination. Also, we have sent some couples to the US and to Southeast Asia — Bali, Philippines, Thailand. It’s at least 30,000 yuan [about $4,611] plus. That’s just the photos, not the flight tickets, hotels.”

However enticing the top line numbers may be, brands need to focus on reaching the right target demographic. A couple is usually engaged in the planning process for a period of about a year, which is not a particularly long time to convert a consumer that, in all likelihood, hasn’t grown up exposed to bridal brands, nor are they someone who can look to their parents or the elder generation for ideas for their big day.

Local brides felt insulted when American designer Vera Wang launched her first China store in Shanghai in 2013 and instated a 3,000 yuan ($450) fee in order to try on the gowns, a policy that didn’t exist in any of their other stores around the world. The brand said it was a measure against counterfeiters, but quickly withdrew the fee after the backlash that ensued.

According to Thomson Cheng, president of Walton Brown, the Lane Crawford Joyce Group arm that helps foreign labels such as Kate Spade and Brooks Brothers manage their brands in China, the exploding middle class is the key and Chinese brides with deep pockets are likely to do their shopping on their trips to the US and Europe anyway.

“The major market is more the middle class segment but it’s not [those who can buy] an Alexander Mcqueen gown. This particular segment would have a lot of business opportunity in China,” says Cheng.

Liu seconds this opinion and singles out cities such as Shenzhen, Chengdu and Chongqing with tremendous potential. “The growth area we’ve found really is the quasi-second tier, one-and-a-half tier markets,” he says. The caveat, however, is the significant capital investment to achieve scale in such a large country. The business of wedding dresses is one reliant on large showroom spaces.

Nevertheless, China’s bridal market is one that is eager to be educated and guided. Just as De Beers famously created the tradition of proposing with a diamond engagement ring in the US, Chinese couples are ready to commit to new ideas to celebrate their big occasion.

“I think, for sure, there is a mass scramble to figure out how you codify new Chinese traditions for the wedding. There’s a huge opportunity for people to try and establish that,” says Liu. “These young couples decide to get married and they’re hit by a hurricane of decisions, most don’t know how to get through.”