The Fashion Trail | Australia, Against All Odds

SYDNEY, Australia — Australian fashion has an image problem. When I mentioned to friends that I was thinking of attending Rosemount Australian Fashion Week in Sydney, the reaction ranged from raised eyebrows to incredulous laughter. Others quipped that the sum total of Australia's contribution to global fashion could be distilled down to Ugg boots and swimwear.

"Surely you'd only be going to take some time in the Australian sun?" they asked. But as my schedule only allowed for three days in the Australian fashion capital, there would be little time to sit on the beach and anyway, the summer sun in Sydney had already given way to crisp Autumn evenings and intermittent rain showers.

It was an email exchange with Tommy Ton and Susie Bubble that finally convinced me to get on the 24 hour flight from London to spend a few days immersed in Sydney's fashion scene. Both Tommy and Susie were planning to go back for their second season, and highly recommended that I come along too.

In Susie's words, there is "plenty to see that's interesting...it's good to see a developed fashion week outside of the big four and definitely worth going to just to see how Southern hemisphere fashion works!"

Indeed, that turned out to be the most interesting question of all, and it was well worth the time to get there.

In multiple ways, it seems the cards are stacked against the Australian fashion industry. Apart from the fact that Sydney is more than 20 hours away by plane from all of the major fashion capitals, the value of the Australian dollar has increased by over 100 percent in the last ten years, from 53 to 106 Australian cents to the US dollar. This has made products exported from Australia very expensive, though raw materials and services from abroad have also therefore become much cheaper, an important consideration in a country where local apparel manufacturing is scarce.

But, the complexities continue. Unlike other secondary fashion markets like Brazil, India and China which have huge local populations, Australia has only 23 million people. To build a sizeable fashion business therefore, international growth is imperative. However, the fact that Australia is seasonally opposite means that in order for designers to build global businesses, they have to find some way of catering to both their local market at home, as well as the large Northern hemisphere markets in Europe, North America, China and Japan.

THE POWER OF TRANSEASONAL PRODUCTS

With all of these challenges, I began to wonder if it was possible for any Australian fashion designer to build a global business. All it took was one conversation with Nicky Zimmermann to prove me wrong.

More than twenty years ago, Zimmermann and her sister began designing swimwear, and shortly thereafter began showing at fashion week in Australia. Unlike the straightforward swimsuits which are ubiquitous in a country where the lifestyle is built around beach culture, Ms. Zimmermann has specifically sought to associate her product with fashion, and has built a global following for a core product that is "transeasonal."

"We sell swimwear pretty much the whole year round," she said to me as we sat down for lunch in the chi chi food court of the brand new Westfield shopping mall, where the brand has opened its latest Australian store. "We knew from the very first season that we would have a seasonal issue, but we always linked it to fashion which has now enabled us to add our own ready-to-wear line," she explained. Zimmermann and other Australian brands like LOVER also split their collections, targeting part to the local market and part to the markets in the Northern hemisphere.

The strategy has worked wonders. Zimermann now has more than A$25 million in annual sales, 14 stores across Australia, and plans to open its first international outpost on Los Angeles' Robertson Boulevard later this year.

But lest you think that fashion down under is restricted to swimwear, make sure you have a look at the collections by Dion Lee.

Aged only 24, Lee is Sydney's design wunderkind. Unlike many of his peers who seemed content to draw liberally and unashamedly from the collections shown in London, Paris and Milan only a couple of months ago, Lee showcased an aesthetic and approach all his own. Layers of tailored pleats and folds, with soft abstract prints and deconstructed, asymmetrical silhouettes made for inspired viewing, even in the landmark setting of the Sydney Opera House, which could have distracted from a collection by a lesser talent. The expectations placed on this young man were formidable, and by all accounts he more than lived up to them.

At the end of that sunny Sydney day, Mr. Lee breathed a sigh of relief as he collapsed in a heap at the Blue Bar and told me about the challenges faced by fashion designers in Australia — a virtually non-existent local manufacturing base, a small local fashion market, the soaring Australian dollar — in addition to those other difficulties that young designers face the world over. Operating an emerging fashion business in Australia is not for the faint of heart.

But this is one determined young man with eyes on taking his business global. Already, Net-a-Porter has snapped up his collection. And, with help from his mentor Nicky Zimmermann, he is plotting his next moves. Watch this space.

I was also struck by the aesthetic sensibilities of another young Australian, 28 year old Chris Kyvetos, creative director of the venerable Australian menswear store Harrolds, which opened a huge 1000 square metre emporium in Westfield Sydney in December 2010 to great fanfare and early commercial success.

Kyvetos has curated an enviable selection of globally recognised men's fashion brands — Thom Browne, Comme des Garcons, and Kiton, and soon, Tom Ford and Rick Owens — in a setting that is truly world-class. But what was even more special was discovering niche brands from all over the world, including Naked & Famous denim from Montreal, Gold Bunny leather jackets from Milan, t-shirts by Deerdana from New York, and Song for the Mute, a local Australian label.

THE ARRIVAL OF INTERNATIONAL FAST FASHION


But many other local retailers are having a tough time of it. Earlier this year, the denim brand Sass & Bide, (another globally successful Australian business with a core transeasonal product) received a cash injection of A$42.25 million from Myer, one of country's leading department stores.

Like many of its peers, Myer has been struggling to compete with the arrival of international chains, and its net profit is expected to decline by 5 percent this year compared to 2010. According to Myer chief executive Bernie Brookes, the department store took a 65 percent stake in Sass & Bide as part of its efforts to introduce "new product categories, brands, concepts and concessions."

To put the retail challenge in perspective, consider the hullabaloo in April when the country's first Zara store opened in the new Westfield shopping centre, upending the stodgy local retail scene, previously sheltered from international chains that move at the pace of global fast fashion.

Australian editors spoke breathlessly about Zara's grand opening event that had queues of VIPs forming around the block. Within three minutes of opening, more than 80 percent of the stock was snapped up leaving local Zara executives to proclaim that it was the one of the most successful Zara openings ever and underlining the insatiable appetite Australians seem to have for international fashion.

Unlike some luxury fashion brands which insist on selling the same product in the Australian winter that is being sold during the Northern hemisphere summer, Zara is tailoring its product offering to fit with local tastes and seasons. Zara spokesman Jesús Echevarría told Jess Blanch, editor in chief of Australia's Russh Magazine, that "eighty-five per cent of Zara's Australian merchandise has been either adapted for or tailored specifically to the Australian market."

It's an approach that more international labels may want to consider as the buying power of other Southern hemisphere markets in South America, the Middle East and South East Asia continues to grow. 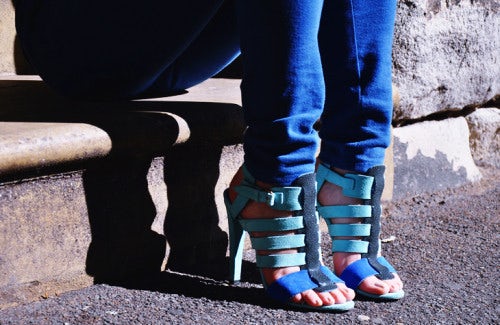 But perhaps the biggest threat to Australia's domestic fashion industry is a virtual one. As Mary Henderson of Australia's Marketing magazine wrote last year, "the choice for purchasing is now both international and virtual and no longer physical and domestic."

Outside the shows, it was hard to distinguish the Australian editors' streetstyle from that of their international counterparts at the shows in Paris and New York. Tommy Ton and Phil Oh were having a field day. It was obvious that consumers in Australia are very aware of international fashion trends, and want access to the same products and collections as their peers in other parts of the world. But consumers repeatedly complained that they weren't able to find what they were looking for at home, online or off.

In the pre-internet era, Australian retailers were artificially protected from international competition due to the sheer distance from the rest of the world, but the internet has blown this wide open. Armed with a strong Australian dollar that makes shopping abroad a relative bargain, they are flocking online to buy the latest trends from American and European etailers like Shopbop, Net-a-Porter and Topshop, who can deliver orders to their doors in a matter of days. Australia is now the third or fourth most important market for many international fashion e-tailers, a ranking that is disproportionate to the country's relatively small population.

For the most part, Australian retailers have been very slow to move online, citing complications with logistics and complaining about the unfair tax advantages given to international retailers, who are exempt from collecting sales tax on purchases less than 1000 Australian dollars. If Shopbop can get the goods to all the way from America to Australia without issue, it's surprising that local retailers cannot even organise themselves to deliver domestically.

Thanks again to IMG for continuing to invite me to their international fashion events. It's a great experience to meet so many new people and understand the ever-changing dynamics of our global industry.