KIEV, Ukraine — Ukrainian fashion exports have been having a good run again. With Emily Ratajkowski, Kourtney Kardashian and Bella Hadid papped in Ienki Ienki’s neon-coloured puffer jackets and Instagram feeds filled with delicately embroidered numbers drawing from Vita Kin’s folk-inspired dresses, the global fashion industry seems to be looking once again to Ukraine for some of its style cues. But if you had asked locals just five years ago, few would have dared imagine such a future was around the corner.

As the country underwent a turbulent period of revolution, Ukraine’s once-promising future as an international fashion player seemed to be in tatters. The world watched as chaotic scenes from the Maidan protests framed war in the Donbass region. Ukraine’s economy contracted by nearly 10 percent in 2015, bringing consumption to an abrupt halt.

A younger generation saw hopes of EU citizenship promptly snatched away by the old guard of corrupt politicians and pro-Russian businessmen. When storming the 2.5-acre palace of former president Viktor Yanukovich, protesters found golden toilets and an ostrich farm, an illustration of the excess of yore.

“People used to be careless and thought the metaphorical party would never end,” says designer Elena Burenina, a fixture on the Ukrainian Fashion Week calendar, which took place earlier this month. “But when the revolution happened, it’s as if [our] world plunged into darkness,” she adds.

Today, ‘Made in Ukraine’ needs to be written in an extra-large font because it sells.

The designer famed for her intellectual yet subversive clothing recalls watching as the wives of high-profile politicians and society hostesses, who frequently had custom pieces made at Burenina’s studio for over a decade, disappeared one by one. Then she was dropped by important international stockists and clients because of upheaval in transport and customs-related logistics.

“Of course it was felt [both] psychologically and economically,” says Anastasia Riabokon, one half of the duo behind Lake Studio, a label known for its sharp tailoring and feminine silhouettes that enjoys success in Ukraine but also internationally, counting Moda Operandi as a stockist.

But instead of retreating in the face of social turmoil and conflict with Russia, many Ukrainian brands rallied. “In 2015 we made a collection that honoured Ukrainians. Some coats had a print that looked like the marks left by a car wheel. Our accessories looked like gas masks.” More importantly, however, “there came a change in attitude,” Riabokon says.

“The old ways of living, those that represented the old guard, died down," says Riabokon. "Everything used to be golden, embellished, logo-filled. After the revolution, that mindset disappeared, and a lot of creative potential was unleashed. Many opened small businesses, restaurants and cafés; there was a creative renaissance.” 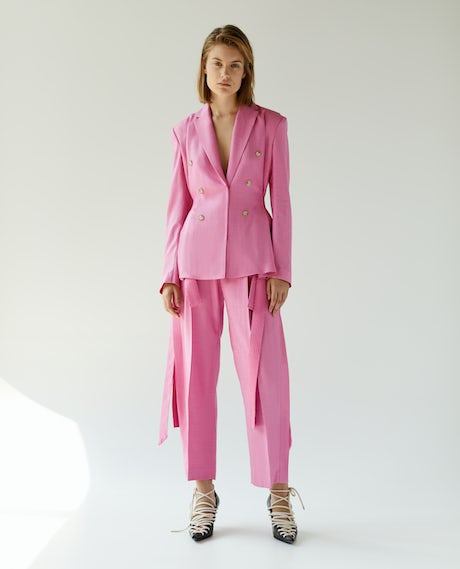 Although the devaluation of the hryvna (fourfold against the dollar) sent the cost of doing international business sky-high, it also made Ukrainian products much more affordable abroad.

For a snapshot of the energy behind the country’s creative renaissance, visitors to the Ukrainian capital need only look to Reitarska Street in the old city. Syndicate Original, one of the country’s first streetwear manufacturers, is buzzing with Gen-Zs browsing printed T-shirts and sweatshirts, while at the café-meets-art gallery next door, The Naked Room, visitors are perusing books while mingling with artists and writers.

A lot of creative potential was unleashed — there was a creative renaissance.

“In terms of [local] consumption, the dynamic has been trending upwards,” says Dmitriy Ievenko, founder of Ienki Ienki, which makes instantly recognisable puffer jackets, all of which are manufactured at Ienki Ienki’s factory just outside Kiev with fabrics imported from Italy and Switzerland. “Real estate is competing more and more, Moncler is launching for the first time, and young people are opening so many coffee shops and stores.”

But the country’s recent recovery hasn’t been as quick or as easy as some hoped. According to the State Statistics Service, GDP growth slowed to 2.8 percent in the third quarter of 2018, after accelerating for two consecutive quarters. Forecasts for next year are cautious: the IMF expects GDP growth of 2.7 percent with inflation at 7.3 percent. While Ukrainians in the western side of the country are more optimistic, the eastern regions in cities like Luhansk or Donetsk, where war disrupted transport and logistics hubs, have a longer path to returning to pre-war economic levels.

Immediately following the war, Vita Kin’s label of colourful vyshivankas — a long dress worn as national costume in Ukraine — exploded in a matter of weeks. Very soon outlets from Vogue to i-D were covering the label and its heritage, while stockists soon came knocking. 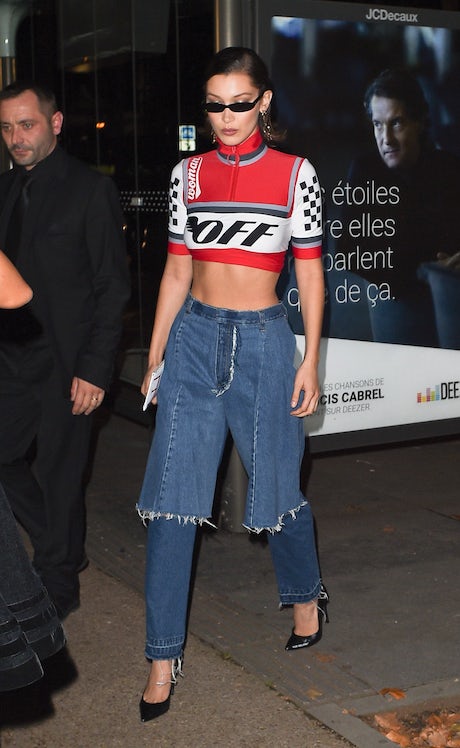 “There was a new blueprint for designers, who now understood it’s important to have international sales and a business,” says Daria Shapovalova, the founder of More Dash and Kiev Fashion Days, which showcased designers from 2010 until early 2018. Labels like Litkovskaya, Bevza and Anna October moved their fashion shows to Paris and New York over the past few years for maximum exposure, acting as ambassadors for the ‘Made in Ukraine’ brand.

In the process, some chose principles above business, and stopped selling in Russia altogether. Artem Klimchuk, another buzzy designer who operates directly from his atelier in central Kiev, says domestic multi-brand stores quietly dropped Russian labels, and if they do continue selling them, it is not advertised. “I don’t even look to Russia,” he says. “It’s because of the war, of course — I don’t sell there by principle. I know there’s a big market there, but it doesn’t feel right.”

Svitlana Bevza, who is well-known internationally with stockists in China, the UK and Japan, stopped all sales in Russia after the Maidan protests, too.

Designer Ksenia Schnaider had been on the same path as everyone else — she graduated from Kiev National University of Technologies and Design (KNUT), joined the Ukraine Fashion Week schedule, and continued designing from a small studio in the city while doing two shows a year for an audience of clients. That is, until 2016, when one of her denim pieces went viral. Buyers from all over the world, including Selfridges, came knocking and asked for a full denim line.

The only thing worrying me is there’s very few brands who really have a [significant scale] business.

“We hadn’t done denim before because in Ukraine it’s impossible; you need huge batches and scale,” says Anton Schnaider, Ksenia’s husband and chief executive of the label. Yet, they took their chances and focused investment in the denim category.

“The market pushed us,” says Ksenia. “In 2016 the brand became global; it was a breakthrough for us, so we changed our whole business strategy.” Today the label counts over 50 global stockists and sophisticated manufacturing facilities in the outskirts of Kiev.

Ksenia Schnaider and Ienki Ienki’s Ievenko are examples of two Ukrainian entrepreneurs who went global. While Schnaider matured and seized a business opportunity, Ievenko is a marketer first, and focused on making one core product. Ienki Ienki's wholesale revenue for its second season was €4.5 million ($5.1 million) with 315 stockists in 30 countries, and an 100 percent sell-through rate in Asia. In one season, the brand grew by 200 percent. “Ukrainian designers have definitely matured,” says Victoria Balaniuk, one half of the duo behind Flow the Label, known for its craftsmanship and Phoebe Philo-esque pieces.

“They used to all copy each other, but now people develop in different ways and aim to find their own niche and recognisable identity.”

“It worked like a boomerang effect,” recalls Ievenko of the brand’s popularity abroad. Many wealthy Ukrainians feel patriotic when coming across a Ukrainian brand at Barneys New York, Selfridges or 10 Corso Como. Still, “it’s a closed loop,” he says.

“University graduates should work for a fashion brand to learn the ropes, but there’s so many labels that are 10 years old who simply can’t grow their business, so they don’t hire new people.” 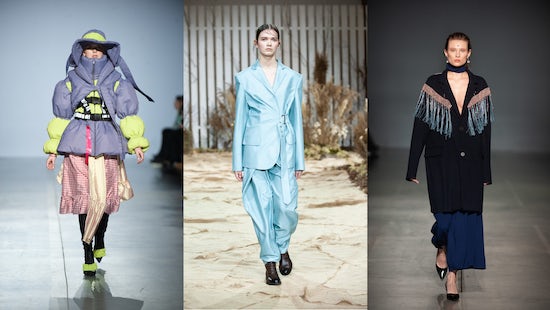 For Lilia Poustovit, who launched her label in 1998 and showed her collection at the first ever Ukrainian Fashion Week, it’s not all black and white. “The only thing worrying me is there’s very few brands who really have a [significant scale] business.” According to a study on the Ukrainian fashion industry by Ana Varava, apparel production in Ukraine started to increase significantly from 2015, but 87.2 percent of companies — a total of 1349 — are still considered “small enterprises.”

“I waited for new designers to make it, but I don’t see it,” says Anna October. “There’s no business plans or projects, [they’re too focused on] the [artsy] fashion angle.”

Lack of institutional and financial support is certainly part of the reason that designers can’t scale up. “There is not yet an organisation that could bring designers together and invest in them,” says Varava, the author of a study on the Ukrainian fashion industry.

“We’re used to having to work ten times harder than designers in the West to build a brand. We work with imported fabric and have issues with customs every day,” says Frolov, who at 25 is also a lecturer at KNUT. “But the first thing I say to my design students is: make a business plan. I’d have saved myself from so many mistakes.”