“The appetite for luxury goods is more pronounced than ever in the country's capital Hanoi and in Ho Chi Minh City,” says Tran Thi Hoai Anh (Tran Anh), who also owns high-end multi-brand boutiques in both cities. “Only a decade ago it was all about knowing the difference between Gucci and Prada, [but] today’s new generation of wealthy shoppers are driven by the quest for quality, distinctiveness, and craftsmanship.”

Vietnam was among the poorest countries in the world less than thirty years ago, but the country’s GDP for the third quarter of 2019 has quickened to 7.31 percent, making it one of the fastest growing economies globally. According to the Vietnam News, its fashion industry generates $2.5 trillion in revenues annually and revenues will double over the next decade. It also boasts one of Asia’s youngest and most educated populations and a fast-growing middle class, all requisite ingredients for a robust luxury market.

The appetite for luxury goods is more pronounced than ever in the country's capital Hanoi and in Ho Chi Minh City.

While European brands continue to focus on affluent shoppers in much bigger Asian markets like China and Japan, they are beginning to wake up to encouraging indicators in Vietnam: a robust economy, rapid urbanisation, burgeoning local business players and an up-and-coming young consumer. But like anywhere else, getting to know local shoppers and market nuances is critical to doing business.

A country’s politics have always shaped its luxury consumption, and Vietnam, with its one-party communist state, is no exception, says Tran Nguyen Thien Huong (Tran Huong), editor-in-chief of Harper’s Bazaar Vietnam and chairwoman of Sun Flower Media, which publishes the title and Esquire Vietnam.

According to Tran, Vietnam was one of the richest nations in Southeast Asia prior to the 1970s, but the US departure following the war meant many affluent families left with them while others “hid their wealth in the form of diamonds and gold.”

Though the nation appeared to be very poor, “there was still an inner wealth,” she tells BoF. This changed after Vietnam adopted its doi moi (“new life”) economic policy in 1985, birthing its private sector, and opened up to foreign investments and ownership in 1987. “People can show their wealth again.”

On the last night of VIFW, Le Hong Thuy Tien (one half of Vietnam’s luxury power couple alongside Johnathan Hanh Nguyen, who distribute the lion’s share of luxury brands across the country) made a special appearance on the front row alongside the event's Founder and President Trang Le to support designers Adrian Anh Tuấn and sustainable luxury player Metiseko.

[They] hid their wealth in the form of diamonds and gold.

According to BCG, 16 percent of Vietnam’s population will be affluent by 2030, compared with 5 percent in 2018. The consultancy firm defines affluence as the “purchasing power and intent to sharply increase their acquisition of a wide variety of premium and luxury goods and services.”

Discrete “old money” shoppers and newly affluent consumers will be joined by a wave of young luxury shoppers. The World Bank estimates about 60 percent of the Vietnamese population to be under the age of 35 by 2035 – the youngest population of any Asian country. What is worth noting is the fact that, like their peers in Thailand, Vietnamese digital adopters largely leapfrogged to mobile usage — many forecast the same happening in the mobile payments sector.

“Facebook, Instagram, Google, YouTube are some of the largest platforms used by Vietnamese on a daily basis,” he says. Unlike focusing on apps like Xiaohongshu and WeChat in China or Instagram in the west, he notes that Facebook should be the channel of choice for companies looking to grow their Vietnamese audiences.

We’ve hit a turning point, says Tran Anh, where luxury brands are finally getting to know their new clientele. “We are starting to see a generation of Vietnamese students that came from rich families, went abroad to study, get masters, doctorates and come back to Vietnam. They have purchasing power and are coming [of] age where they start to control the family business.” Brands are already finding new ways to tap this demographic: in late October, Hermès took over Hanoi’s Temple of Literature’s hallowed halls for its Hermès Heritage exhibition. 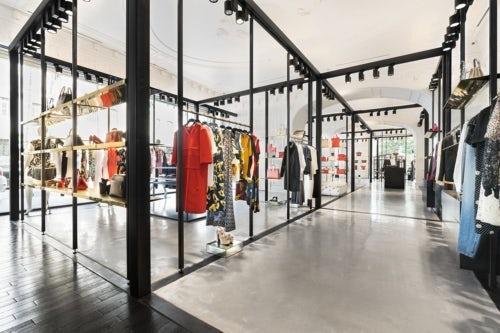 According to Tran Anh, local luxury shoppers have matured beyond logomania, and have been increasingly receptive to niche luxury brands such as Comme des Garçons and Gabriela Hearst, which she stocks at her multi-brand chain stores Runway and RRR. “Runway [is] living proof that niche brands can sell very well in Vietnam despite the expansion and popularity of general big-name brands,” she says.

“I have clients who bought $1,000 T-shirts with no logo just because they love its [distinctive look].”

The country’s white-hot online shopping industry will also be a game-changer: where the market was pegged at $9 billion last year by the Vietnam E-Commerce Association, the organisation predicts that by 2025 it will reach $33 billion.

Luxury, but Make It Local

Even for top luxury players, it won’t be all smooth sailing. Tran Anh observes that an inrush of competition and a lack of consumer awareness means that even designers who are well-established abroad may struggle to find a foothold in Vietnam’s fragmented retail landscape. “[Internationally renowned] big names don’t guarantee success in Vietnam,” she says. “Many of them have failed.”

Pricing is a big part of the equation. Harper’s Bazaar Vietnam’s Tran notes that most luxury consumers still purchase their luxury goods while vacationing abroad in cities like London and Paris, due to import taxes at home that once totalled 30-45 percent — nowadays, she says prices are around 10-15 percent more expensive than in other global cities. “Most of the rich people travel anyway, almost every week or month,” she says. “The true businesspeople who work hard to earn their money, they don’t buy [luxury] in Vietnam, they buy it abroad.”

However, this is set to change. In June, the European Commission and Vietnamese Government signed the EU-Vietnam Free Trade Agreement, which will reinforce trade and investment ties between the two. “European luxury companies [will] benefit from near-tariff-free imports that make the price of a Dior bag in Vietnam comparable to Paris,” notes Nguyen.

When the time comes, brands will need to be armed and ready to cater to their new VIPs. “We are always in need of many things, but the moment brands [arrive] here, people want them less,” says Tran Anh.

Keeping the fire on clients’ hearts [requires] a lot of effort and close collaboration between brands and their partners.

A local partner, while no panacea for the steep learning curve companies will encounter in any foreign market, provides a smoother transition. “Having the right partners and right pricing policy are key,” she adds. “Keeping the fire on clients’ hearts [requires] a lot of effort and close collaboration between brands and their partners.”

Brands will also have to balance catering to Vietnam’s increasingly competitive brick-and-mortar retail scene while laying down groundwork for a luxury e-commerce boom. Entering the market is harder than ever due to high rents in downtown retail areas, says Nguyen. “Mall complexes are still where the retail action [is] taking place...opening a [physical] retail store is still the prerequisite for any luxury brand entering the country.”

But considering Vietnam’s growing cohort of young consumers, luxury e-commerce’s moment will be a matter of when, rather than if. In a report published in March 2019, Bain & Company partners Florian Hoppe and Aadarsh Baijal wrote that like its neighbouring nations Thailand and Malaysia, Vietnam’s “middle class is far more dispersed than many business leaders realise, [increasingly reaching] across urban and rural settings” to second-tier cities like Can Tho and Thu Dau Mot. Online shopping will prove especially valuable for luxury brands to extend their reaches beyond Ho Chi Minh City and Hanoi when the time comes.

As the luxury space gets competitive, brands should act fast, but smart. “Vietnam’s luxury market is much bigger [than some other Southeast Asian countries],” says Tran Anh. “If not potentially the biggest one.”

Zoe Suen travelled to Hanoi as a guest of Vietnam International Fashion Week.