The Milanese fashion dynasty that birthed and sold Marni quietly returned to fashion last year with Plan C. The label expects to generate about €5 million in 2019.

The Milanese fashion dynasty that birthed and sold Marni quietly returned to fashion last year with Plan C. The label expects to generate about €5 million in 2019.

MILAN, Italy — Understatement runs in the blood of the Castiglioni clan, the Milanese dynasty that birthed — and sold — the Italian label Marni and then, last year, quietly returned to fashion with Plan C, a women's ready-to-wear line with the distinctive look that’s a family signature.

The label’s headquarters are housed in an elegant apartment in a modernist building in Via Visconti di Modrone in the centre of Milan. It’s here that the Castiglionis’ fashion story began, when Marni, five years after launch, split from the family fur business Ciwifurs, allowing designer Consuelo Castiglioni to develop a more directional aesthetic.

On the street outside, there is no sign. And once a visitor reaches the building’s second floor, climbing a rather anonymous set of stairs, there is nothing more than a tiny label above the bell on a nondescript door reading: “GC” (for Gianni Castiglioni, the family patriarch and chief executive of Plan C). Inside, however, it’s another world: the walls are painted in a charming shade of aqua green; the furnishings deliciously eclectic with plenty of mid-century modern pieces accented by kinky touches like beige curtains in PVC. It’s clear that this not your typical bourgeois setting. 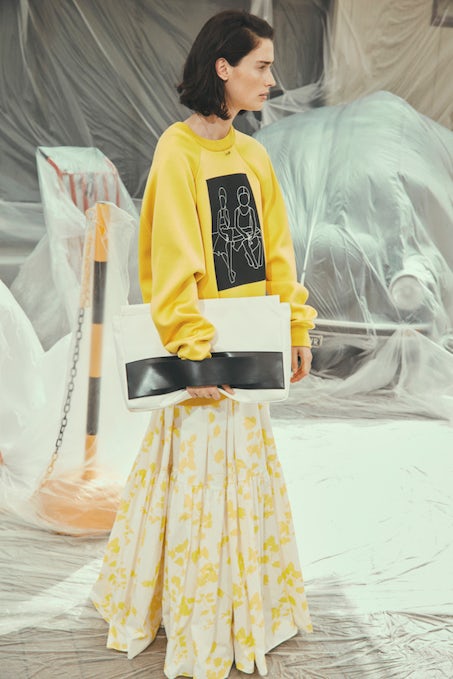 “Not being for everybody, but something that you have to discover, is a positive thing for us, today more than ever before,” says Gianni Castiglioni. “We like to talk to those who speak our language.”

Castiglioni knows a thing or two about the fashion business. After all, he built Marni with his wife Consuelo, achieving success before things became too big. (In 2012, the family sold a majority stake in the label to Renzo Rosso’s OTB group and, in 2016, Consuelo stepped down from the company and was succeeded by designer Francesco Risso.)

Plan C is the Castiglionis’ return to a small-is-beautiful business model. This time, the creative force behind the label is Carolina Castiglioni, Consuelo and Gianni’s 38-year-old daughter; her brother Giovanni is the label’s operations director. The siblings both learned in the trenches at Marni, where they were director of special projects and operations planner respectively.

Then, there is the impeccable sense of taste that Carolina, in particular, absorbed directly from her mother. But despite the similarities between mother and daughter — the long, perfectly unkempt hair; the melancholic eyes paired with a bright smile; and the roomy, impeccably eccentric clothing — Carolina is no Consuelo redux and Plan C is no Marni re-enactment. There are some similarities of course, but Plan C has an urban, pragmatic feel all its own, rooted in the daily realities of Carolina’s life as an entrepreneur and mother of two. “My days are busy, and I dress accordingly,” she says.

“I only do the things that I like and which I feel are right, and then everything evolves from that,” continues Carolina. Proving how personal the Plan C project is, the designer wears the label almost exclusively day in and day out, testing samples herself.

On the day of our meeting, she is wearing in a pinstripe cotton shirt with a knitted double collar — one of Plan C’s bestsellers — and a patent leather skirt, socks and sandals, giving the look an offbeat touch. “Plan C is based on the idea of doing things well, without rushing, without flooding the market with excess product. We only produce two collections per year, and we plan to keep the business model like this,” she explains. “This is also our way to be sustainable in an industry which, by its very nature, cannot be considered sustainable at all.”

When the news got out that we were in business again, all the old clients showed up.

This approach also makes for a sustainable approach to business. Plan C sells its collections, entirely produced in small laboratories in the Abruzzo region of central Italy, early in the season, when larger brands are selling their pre-collections and buyers spend the majority of their budgets. Pricing has been carefully considered: Plan C is positioned at the luxury end of the market, but it’s prices are relatively fair: between €420 ($465) and €670 for shirts, €450 and €700 for knitwear, €440 and €980 for skirts and €1200 and €2350 for outerwear.

Plan C launched in September 2018 through word of mouth. The label did not stage a fashion show — and there are no immediate plans to do so — instead holding a small presentation in the family apartment, which is the beating heart of the business, housing Plan C’s design studio and commercial and communications departments.

“When the news got out that we were in business again, all the old clients showed up,” recalls Carolina. “We have built solid and valuable bonds across the years, and we have been very happy to witness what a good reputation the Castiglionis have in the system. This first year in the business has been an intense but very rewarding one.”

Rosi Biffi, owner of Biffi Boutiques in Milan and Bergamo, has been an early supporter of the brand, just as she was with Marni back in the day. “I was immediately convinced by the project: there is true substance behind it,” she says. “The collection has a clear family DNA. Pieces are very special yet very easy to use, and our clientele responded immediately. Plan C has performed extremely well, especially with Milanese women.” 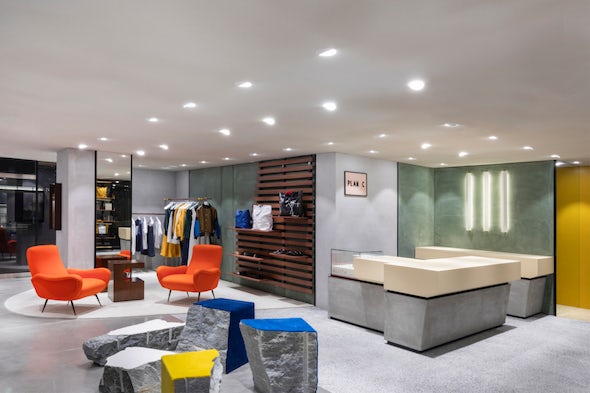 Plan C sells almost entirely via retail partners: the line is carried by 129 boutiques, 19 department stores and 10 e-tailers, including Harvey Nichols, Le Bon Marché, 10 Corso Como, Biffi, Andreas Murkudis, MyTheresa and Ssense. Asia is a critical market for the label, especially Japan, South Korea and China. Plan C’s sole flagship store opened last spring in Tokyo. The label currently has 5 shop-in-shops across Japan and South Korea and recently signed a distribution deal with Samsung for the opening of another 6 shop-in-shops in Korea, the first of which will be in Seoul’s Galleria in March 2020.

“A linearity of thought and business, I guess, is what made the project effective right from the inception,” says Carolina, looking back at the last year. “Plan C is based on a very simple, clear idea and that reverberates on every aspect of the business. We want to be authentic and stay true to ourselves, and we want to be in the right shops that can represent our vision. And although we keep growing, we want to maintain a manageable size.”

Plan C also fills the void left by the old Marni. Consuelo’s Marni, which reached €170 million in turnover the year the designer stepped down, was a unique offering, catering to women who may not respond as easily to Francesco Risso’s Marni, which took a more experimental direction.

“Of course, we have looked at what the market needed, but that was just the starting point,” says Gianni Castiglioni. “I was probably the one who pushed hard to get on the road again, but not doing so would have been a terrible waste of competences and knowledge. Starting again has been easy, not least because the family business is what we know best, and what makes everything simple, fast, effective.”

“I know family is a very Italian way to do business,” he continues, “but I have done this all my life and do not see any cons to it.” Carolina adds: “Working within the family makes Plan C a project for life, not just lifestyle.”

Where Are Italy’s Fearless Wunderkinds?