Logos were once the symbolic and unwavering facet of a fashion house, but as branding becomes more nuanced in the digital age, logos are becoming more fluid than ever.

Logos were once the symbolic and unwavering facet of a fashion house, but as branding becomes more nuanced in the digital age, logos are becoming more fluid than ever.

The logo has returned to the forefront of a hyper-branded, irony-laden streetwear-driven aesthetic | Source: Courtesy
Share
1 Comment
By Osman Ahmed July 29, 2017 05:25

LONDON, United Kingdom — Today, the logo certainly does not maketh the brand, so vast and varied are the touchpoints between companies and consumers. Whereas, New York’s Times Square and London’s Piccadilly Circus — ground zero for marketing messages — were once lit by glaring logos, now the same real estate is more likely to showcase digital content. And yet, logos still matter.

“Logos can easily become boring and dated,” says Baron, who has worked for the likes of Prada, Balenciaga, Burberry and Nars, as well as Calvin Klein. “A lot of logos are very dated and need redesigning. They need to move and change, but you have to be careful with the way you do it; don’t change things just for the sake of change, but I believe it’s important to change when you need to change.” 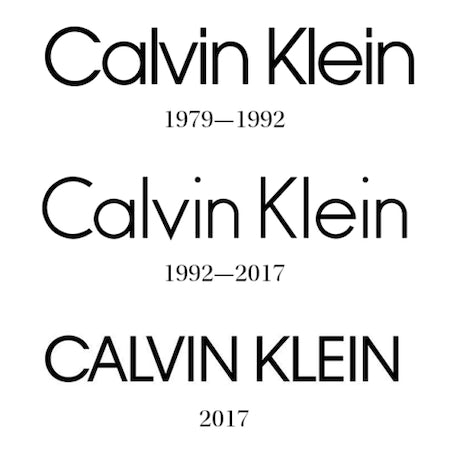 The three incarnations of the Calvin Klein logo | Source: Courtesy

“[Some logos] become a cultural reference,” he adds. “The Calvin Klein logo ended up being used like crazy and was known by everyone. Everybody had their initials done like the CK logos — it was one of the logos that people used as a cultural thing.”

Calvin Klein’s new all-capital design certainly served one purpose: heralding the arrival of Simons, who has also rebranded the company’s ready-to-wear business, replacing the label “Calvin Klein Collection” with “Calvin Klein 205 W39 NYC.” The move follows a familiar playbook. Pheobe Philo commissioned art director Peter Miles to create a Semplicità logo, echoing a minimalist, anti-logo sensibility that helped to announce her new vision when she took the creative helm at Céline, while Hedi Slimane moved away from the classic “YSL” monogram that Adolphe Mouron Cassandre designed in 1961 in favour of a ready-to-wear logo that nodded to the brand’s Rive Gauche era when he became the creative director of Saint Laurent.

Peter Miles, who also designed a new logo for Proenza Schouler, says it is confidence that makes a great logo. “There’s no rule [as it] depends on the starting point,” he says. “Sometimes a strong logo has been in hiding and all that’s required is editing and repair work.”

Jonathan Saunders, chief creative officer of Diane von Furstenberg, has rebooted the company’s creative strategy, reimagining everything from its mannequins to its shopping bags, which were once sealed with the imprint of a hot-pink kiss. Importantly, Saunders also redesigned the DVF logo in collaboration with the art director Jonny Lu, creating a stark Helvetica stamp of a brand —or a flag, as he points out — with “Diane” and “Von” sitting on equal but opposite sides atop “Furstenberg.”

Today, a logo is simply an aesthetic motif in a designer's arsenal of house codes.

But Saunders is careful not to overplay the importance of the new logo. “A change to a logo hasn’t changed the brand’s perspective, but redefined the way we communicate to our customer,” explains Saunders. “I guess also it’s connected with the culture of originality and the speed in which the high street is able to replicate certain pieces, so therefore brands feel that it’s important to [use their logo to] celebrate their uniqueness and celebrate that it is their product.”

He stresses that a logo must work simultaneously with a deeper creative vision. “People need to be able to recognise the brand through the work, rather than purely through a T-shirt with a logo, which was happening a lot in the ’90s. Now it’s about craftsmanship and decoration — a brand can be recognised just as much for that.” 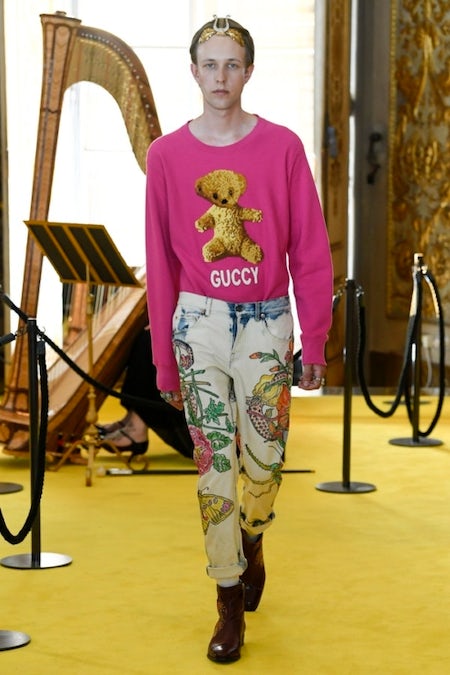 Gucci's ironic riff on its logo for Resort 2018 | Source: Indigital.tv

But some logos still have enduring value for consumers. A look at the resale market for Chanel’s range of quilted handbags is revealing. “We've found that the demand for logo product is more than 20 percent higher than similar, non-logo product from the same brand,” says Rati Sahi Levesque, chief merchant at The Real Real, a luxury re-commerce site. “Chanel’s Timeless flap bag, with its iconic CC logo, retains 30 percent more of its resale value versus the 2.55 flap bag, which is the original flap bag design, sans logo.” At Vestiaire Collective, another resale site, the Timeless is the best-selling bag — and sellers often recoup 70 percent of the retail price on the style.

Logos can clearly work to communicate status. On another level, logos can also become talismanic signifiers for brand purists and other social tribes. Mandi Lennard, the London-based fashion publicist, is known for her love and display of logos and believes they are much more than just superficial status symbols. “I have Louis Vuitton, Chanel and Wu-Tang tattoos [and] I’m surrounded by logos,” she says. “Chanel tissue box, illuminated McDonald’s ‘M’ sign, fake Louis Vuitton football, Supreme chair, Hermès ashtray — I could go on.” For Lennard, the appeal is deep. “[They are] something solid to cling onto in an insecure world; they can feed nostalgia; offer a fantasy; [they] can even make you feel safe.”

Today, logos are clearly back in fashion and at the forefront of a hyper-branded, irony-laden streetwear-driven aesthetic, which is itself a distinct throwback to the heavily-branded ’90s and ’00s. Gucci creative director Alessandro Michele has taken a particularly playful take on the company’s branding, even going so far as to take inspiration from the plethora of counterfeit Gucci products available on the black market, ironically riffing on knockoff culture with clothes and accessories featuring the words “Guccy” and “Guccification.” At Balenciaga, Demna Gvasalia has turned former US presidential contender Bernie Sanders’ campaign logo into a Balenciaga logo and played with parent company Kering’s logo.

At Louis Vuitton, Nicolas Ghesquière has ushered in a new monogram with a softly curved metal “LV,” while, at Dior, Maria Grazia Chiuri has introduced bags and T-shirts notable for a bolder, more graphic typeface (compared to the elegant Nicolas Cochin one used for the brand’s original logo) in what seems like a conscious nod to the overwhelming demand for Galliano-era Dior on re-sale sites.
“As we are living through the ‘Age of Experience’ and ‘The Age of You’ in a world of proliferating touch points, the way in which brands connect with culture is a sign of a brand’s belief, confidence and the strength of its point of view,” says Rebecca Robins, global director of Interbrand, a brand consultancy. “Whether you’re evolving your logo or you haven’t evolved it in the past decade, it’s now got to fight and work harder than ever within the context of seven billion brands and communications.”

Which seems to suggest that there’s new power in playing with brand iconography — once immutable — in a way that’s more fluid, flexible and playful.

Beyond the 'It' Bag