The brand’s sales are surging in China’s $25 billion lingerie market, with consumers entranced by the same 'fantasy' marketing that’s alienating many US customers.

The brand’s sales are surging in China’s $25 billion lingerie market, with consumers entranced by the same 'fantasy' marketing that’s alienating many US customers.

NEW YORK, United States — Despite the barrage of criticism, Victoria’s Secret broadcast of its annual fashion show Sunday night was business as usual: models strutting down the runway in stilettos, performatively blowing kisses and twirling their hair, physical embodiments of the brand’s definition of “fantasy.”

But the target of that fantasy is increasingly outside the United States. While Victoria’s Secret still dominates the lingerie market here, its reign is diminishing: over the past five years, its market share has declined as younger brands like American Eagle’s Aerie and direct-to-consumer startups such as ThirdLove won over younger consumers with body-positive messaging and comfort-oriented products. Parent company L Brands recently replaced Victoria’s Secret chief executive Jan Singer with Tory Burch president John Mehas, and promised that “everything” is up for review.

But the brand’s trajectory in China is another story. In that country’s $25 billion lingerie market, Victoria’s Secret is gobbling up market share. A short stroll down Shanghai's major shopping thoroughfare of Huaihai Road, home to the brand's flagship, will invariably lead to multiple sightings of Chinese shoppers toting pink shopping bags emblazoned with the Victoria's Secret name. Dozens of stores have opened in the last two years, and online, it’s the fifth most popular women’s underwear brand on Alibaba’s Tmall, according to Bernstein.

Victoria’s Secret first entered China in 2018, but it was last year’s fashion show, held in Shanghai, that cemented its status. It was a high-profile debut years in the making, and a major pop cultural moment in China, even as ratings plunged 30 percent for the US broadcast. The country’s biggest stars and tycoons were in attendance, with tickets reportedly scalping for upwards of $15,000.

Staging the show in China wasn’t as easy as booking a venue and flying in a few dozen pop stars and supermodels. The company spent 14 months in fraught negotiations with the country’s culturally conservative government, which had long perceived Victoria’s Secret’s overt sexiness as on par with pornography, according to a person familiar with Victoria’s Secret’s operations in China.

L Brands countered with an economic argument: if China were to reject Victoria’s Secret, it would send a message to other Western companies that China is not open for business. The show also featured a record seven Chinese models.

“This discussion went to the highest levels of the Chinese government,” the person said.

There were other hiccups along the way, including last-minute visa denials for Katy Perry, who was slated to be the headline performer, and model Gigi Hadid. Although the show itself appeared on Chinese television (under the stipulation that it’s aired after midnight), it had to be reviewed and approved by the Ministry of Culture.

Victoria’s Secret is one of many Western brands that see growth in China offsetting sluggish sales at home. Tiffany, for instance, saw its Asia Pacific sales increase 28 percent in the second quarter of 2018. Its latest results sent shares tumbling because it indicated a slowdown in Chinese tourism in Hong Kong and the US, bolstering the importance of the Chinese market.

Victoria’s Secret has an unusual advantage: while its decades-old marketing strategy — equating beauty with being desired by men — may have run out of steam with US customers, it is a relatively fresh concept in China, where public displays of sexuality are only just losing their stigma. The company was able to follow a playbook used by cosmetics companies that have relied on similar messaging there.

“It’s kind of a saturated market in the US so China would be a natural fit for Victoria’s Secret,” said Jennifer Zuccarini, founder of lingerie brand Fleur du Mal and former design director of intimates for Victoria’s Secret. “Traditionally, Chinese consumers wanted more padding [in bras], which makes sense for the VS customer.” 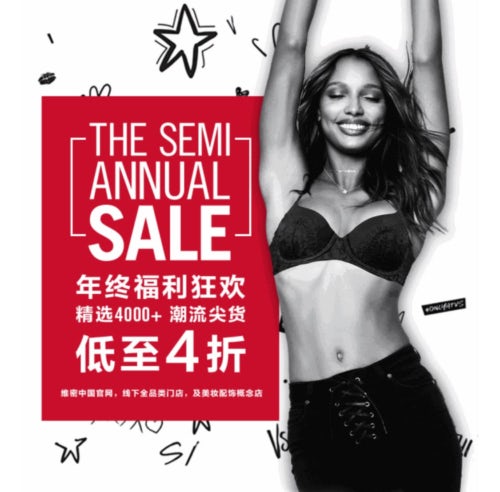 Recent Victoria’s Secret ads served to Chinese are indiscernible from its native ones, featuring smiling, scantily-dressed models. The stores are also similar to those in American malls: dark lighting, life-sized wall displays of the runway “angels” and pink — everywhere.

Victoria’s Secret’s investment in China is not profitable, but that is likely to change soon, analysts say.

“Our priorities continue to be continuing to scale in China… and continuing to build on the success of our partner of stores around the world,” said Martin Waters, chief executive of L Brands International, in an earnings call in August. The company declined to comment for this story.

International growth will give the company time to work out its problems, analysts added.

“They are working on the [bad circumstances here] so they’re not sacrificing fixing these problems for international growth,” said B. Riley analyst Susan Anderson. “But by far, their biggest potential right now is China.”