MILAN, Italy — When Paula Cademartori, an industrial design student from the small city of Porto Alegre in Southern Brazil, decided to pursue a career in fashion, in her mind, there was only one place to go. The 21-year-old spent a year learning Italian, jumped continents and began a master’s degree in accessory design at Istituto Marangoni in Milan. “Not just because it was the only place that had the course,” Cademartori explains, “but because it was the only place where I could learn afterwards. The knowledge of how to do production of luxury handbags, or accessories, is 98 percent based in Italy.”

Following her master’s, Cademartori spent three years in Versace’s accessory department, working in a team of three to design eight collections per year. During her stint at the house, a professor at Marangoni recommended she enter a contest organised by Vogue Talents and Cademartori asked her boss for permission to particpate. When the answer was no, she promptly quit.

With a glint in her eye, Cademartori recalls how she upped and drove to Veneto (the region in the north of Italy known for its manufacturing ecosystem), sourced a factory and — deciding that producing handbags would have been “unethical” because her time at Versace meant she knew what bags the house would unveil in the coming season — created a 32-piece collection of shoes, which she presented to Vogue Talents. “I said, ‘Finally, I am going to do something by myself,’” she beams.

In 2010, after spending a year working as a design consultant, Cademartori pooled her savings with some financial support from her parents and launched her eponymous brand, creating a line of handbags, made by Italian artisans, instantly recognisable by their vibrant coloured leather, cut into patterns and parts of clashing hues, and signature pi-shaped buckles. “The handbag is a status symbol,” she says with a knowing smile. “Men look to women’s feet to see what shoes they wear. So women, for me, buy shoes to seduce the men, but they buy bags to show other women how powerful they are.”

But Cademartori’s bags, priced roughly between $1000 and $2500, are as ergonomic as they are chic. “As a former industrial design student, everything that you design needs to have a purpose. It needs to be functional,” she says. Her Petit Faye model has a cute compact shape, which belies a cavernous interior with five compartments. “The handbag for me is a very precious container that you have all your secrets inside,” continues the designer, clutching her Petit Faye like a pet. “Those secrets need to have the perfect packaging.”

Today, four years after the company’s founding, Paula Cademartori has attracted over 160 global stockists, including Harvey Nichols, MatchesFashion.com and Saks Fifth Avenue, and is on track to generate a modest but respectable €2.2 million (about $2.8 million) in revenue in 2014, according to figures provided by the brand, all without taking any external investment (the designer still owns 100 percent of the brand and continues to consult for other companies, investing the proceeds back into her label). But traction did not come overnight.

“I really started in one room, doing my own press list, doing my own buyers list, doing the first fairs by myself,” Cademartori says, recounting how she would call up stockists, and pretend to be her own assistant to appear more established. “I got so many ‘nos.’ It was so difficult.”

Her breakthrough came during her second season when her handbags’ peacock-bright colours captured the imagination of street-style icons like Miroslava Duma and Anna Dello Russo, who were regularly snapped carrying the label. “Anna [Dello Russo] wore a python gold bag at New York Fashion Week,” she says. “That was the first picture during fashion week and, after that, everything changed.” 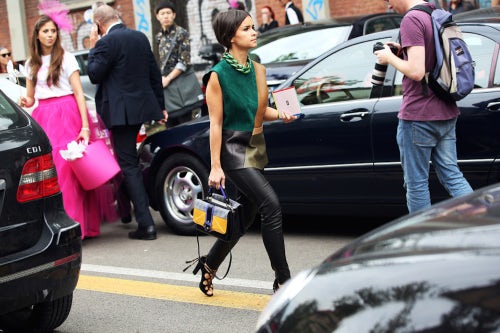 Suddenly, the ‘nos’ began turning to ‘yesses,’ but the company’s growth was slow and steady. Over the seasons, Cademartori has added stockists one by one, both online and off. “Right now, I have a bigger physical distribution,” she says. “I could buy with my eyes closed on the Internet from some brands that I already own. But as I am a new brand, I think people want to see the proof.”

Just under half of her stockists are based in Italy, but the brand has also made forays into emerging markets including UAE, Russia, Saudi Arabia and Brazil, and is set to launch on Net-A-Porter, which Cademartori hopes will help grow the brand in the US market. This season, the label has also expanded its product range into hard clutch bags and backpacks and aims, in coming cycles, to launch small leather goods and, eventually, a capsule collection of shoes.

And then? “I really want to and I will open a shop,” pledges Cademartori, with the same sense of conviction and self-starter attitude that inspired her to jump continents in the first place.