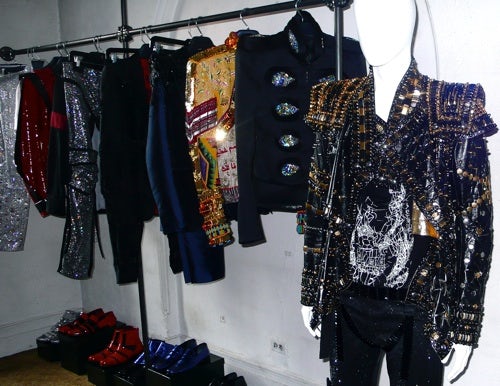 Yesterday, we learned about the beginnings of Zaldy Goco’s work in the music and fashion industries. Today, in part two, we speak to him about his close collaboration with Michael Jackson for the This is It concert extravaganza.

NEW YORK, United States — When Zaldy Goco answered the phone last April and learned that Michael Jackson’s creative team wanted him to develop some costume ideas for the King of Pop’s long-awaited comeback concert series in London, he could scarcely believe his luck. A long time fan of the sometimes-maligned, but always-loved music legend, Zaldy set about developing an approach for creating costumes that at once hearkened back to iconic images from Jackson’s past, while also making him relevant for contemporary fashion of the day.

The results were amazing and once the decision was made to make Zaldy the chief costume designer for the upcoming concerts, the process to get there involved five up close-and-personal fittings between Zaldy and Michael Jackson over a period of a several weeks, including the last fitting, just days before the singer's sudden death.

Zaldy kindly spoke to BoF about the experience of designing for Michael Jackson and shared some photos of Jackson from the fittings, published here for the very first time.

BoF: And now for the topic that I am sure everyone is most interested to hear about: your collaboration with Michael Jackson for the This Is It tour. How did that come about?

It was such a surprise that began with a really casual phone call from someone who was representing Michael’s choeographer, Travis Payne. It was already the end of April and the tour was starting in July, and he asked me if I was interested in making some outfits. Of course I said yes! But, I really didn’t take it all that seriously as I knew that Michael had only ever really worked with one designer in the past named Michael Bush. He had developed all of Michael’s iconic looks for Thriller and Bad. So, by no means was it definite. I thought maybe I’d get to make a couple of outfits — maybe.

It turns out that Michael had been advised to take more of a fashion look with his presentation, and he had asked to see designs from some really big names, including, I believe, John Galliano and Alexander McQueen. My impression is that he got all these packages from these different designers and then he chose who he wanted to work with.

They asked me to come to L.A. the next day to meet Michael and told me they wanted me to do the entire show. In the end, because Michael is so faithful, he did ask Michael Bush to work on a few of the outfits as well, which I thought was really nice especially because it was supposed to be Michael's last tour.

BoF: Wow, that’s pretty amazing. How would you describe what you designed for him?

This is the thing. When they first asked me to do this, they said “we need you to re-invent Michael.” And my first thought was that Michael does not need to be re-invented, especially not now. He is one of the only artists who created iconic looks and iconic images to go along with iconic songs. It’s not necessary for those looks to be reinvented — they just needed to be made more relevant for today. Nobody wants to see a Thriller jacket that it isn’t red and black. People were going to want to see those iconic images, made more relevant to the times.

So, that’s what my approach was — referencing what we knew, but bringing more technology and new techniques that Michael had never used before.

BoF: What are your favourite looks that you designed for Michael Jackson? 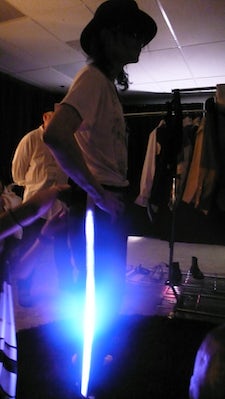 They all kind have their own specialness for me. But, if you ask anyone who works with me, they will always say the We Are The World outfit, embroidered with all kinds of techniques from around the world — from African to American Indian to Japanese to Chinese. It was quite a mix, and very beautiful.

But for me, I loved the Black or White leather jacket, with three different custom plated coloured studs, which was kind of a Sumurai-referenced jacket. The finale jacket is also a favourite, especially because Michael was so excited about it. I had made what Michael called ’secret treasures’ in the shape of little teardrops that enclosed around crusts of crystal chunks.

And then of course there was the light-up outfit for Billie Jean, which was a collaboration with Philips Technology, which really, really made him the happiest. The last time I saw him was about six days before we were leaving for London, and I tried these pants on him and he was silent; completely stunned. After about thirty seconds, he said “It’s everything I’ve always wanted.”

So, that was pretty special for me.

BoF: And then, of course there was his sudden death, which must have turned things upside down for you.

I experience anti-climax after every project, but I was in disbelief. I didn’t know what to do with myself. I had been living and breathing Michael Jackson for weeks on end. When I design for a musician, I immerse myself completely in their music. It just has to play in my head the whole time.

I decided I needed to lock myself away in a hotel to get away, but even that didn’t work. Everywhere I went, people were listening to Michael Jackson. There was no escape.

BoF: Did you have any sense that he might be unwell? 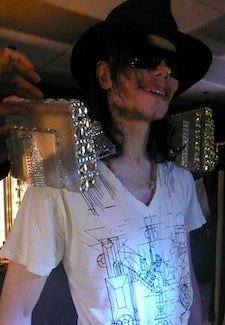 Not at all. And that is the thing that I think the movie really shows. He was quite lively, energetic and strong. And, he was super in tune to all the details. Every time I met with him, he was always catching little details. When I’d do fittings with him, he was very solid and very strong.

BoF: Last year was quite a year for you. Doing Lady Gaga and Michael Jackson in one year is pretty big. What lies ahead for you 2010?

It's funny because I kept seeing the two of them side-by-side in stories or hearing their names mentioned in the same story. And then, all of a sudden I was working with both of them. But right now, I’m pretty excited to get back into the Scissor Sisters, who are launching their third album. But also, last year was a big music year, and I’m thinking of leaning back towards fashion again.

BoF: So there could be a Zaldy label again?

BoF: Thanks very much Zaldy for sharing your story with us.