The big four fashion weeks are competing more fiercely than ever to attract the best young designers from around the world.

The big four fashion weeks are competing more fiercely than ever to attract the best young designers from around the world.

LONDON, United Kingdom — The scales are tipping fast between ‘the West’ and ‘the Rest’ and boy does the fashion industry know it. Never before have the fashion capitals been flush with so many international designers and never before have talented foreigners been courted with such gusto by the powers that be.

It is a shift in power that has been many years in the making but one that seems to have finally crystallised in the season that was. No longer are the fashion capitals content to sit back and wait for the world’s best talent to find them. Instead, organisers of the big four fashion weeks are now on the offensive — even if some hesitate to admit it.

Through both official and semi-official channels and sometimes quietly through their affiliates, a competitive recruitment drive is under way to lure in designers from around the globe.

Clearly, the main reason to entice more designers from outside the fashion capitals is to inject diversity and newness into the fashion week repertoire, while hoping that a few foreign recruits will one day become headline attractions.  But there is something else going on here too.

According to a 2014 report by Bain & Company, 170 million of the world’s 330 million luxury consumers live in North America and Western Europe which means that ‘the West’ now makes up a very slim majority of 51.5 percent of the people who buy luxury goods like designer fashion.

With industry experts predicting that this will fall below 50 percent in the coming years, the transition from majority to minority will mark the beginning of a new world order of sorts for the fashion industry — one where consumers from emerging markets dominate the equation by holding the purse strings.

“When this happens, it will be pretty hard for the industry to justify a system where the vast majority of fashion is still designed by Westerners only to be bought by non-Westerners,” says Shaway Yeh, the group style editorial director of Modern Media, a Chinese group that publishes Modern Weekly magazine.

“Sure, style is universal and, yes, talent should be blind. But lowering the drawbridge to finally let the most talented in from beyond the old castle walls doesn’t mean you have to compromise on design integrity or even trend worthiness. Besides, it’s good for the bottom line.”

The race to bring more Chinese talent into the fashion week fold has become especially intense, reflecting both China’s considerable share of the global market and a broader interest in the evolution of design from the region. In London, Sankuanz and Xander Zhou recently joined the menswear calendar while Paris still has the likes of Masha Ma; Milan snagged Uma Wang; and New York brought in Ran Fan.

Getting more designers into the main showcases will take time but fortunately, some of the leading fashion prizes are now good scouting tools, as they cast a wider net.

Seven of the 26 designers shortlisted for this year’s LVMH Prize hail from Greater China, though some are based in London and New York, and the past two years saw designers from India, the Middle East and Africa represented as well.  And now, it is as much a coup for Paris Fashion Week to attract a name like Rahul Mishra as it was for the Indian designer to win last year’s Woolmark Prize.

Fashion week organisers of all stripes have come to recognise that in an increasingly global industry, it can only be good for business if their designer mix is more globally representative.

Fashion weeks use an arsenal of tactics and sweeteners to lure in designers from strategic markets.

A New Approach in London

One city that seems to have understood this earlier than most is London, where the official calendar reveals that over a third of the designers are born outside of the UK. The most recent of the British Fashion Council’s many international initiatives is an annual event held last month during London Fashion Week that is now in its fourth year.

The IFS (International Fashion Showcase) is a vast exhibition that has shown over 400 emerging designers from over 50 countries in a format reminiscent of the Venice Biennale, whereby each country presents a selection of work in a curated, art directed national pavilion.

“We knew straight away that there were many more opportunities to build on what we had created, so we decided that the exhibition would become an annual celebration of fashion as culture,” she adds, noting that the scouting process is done in conjunction with the various ministers of culture, trade commissions and respective fashion bodies in each country.

Some industry leaders say that the event has been gradually repositioned from an event marketing exercise to a shrewd strategy for international designer recruitment.

“I think the IFS is a clever way for London Fashion Week to continue to be eclectic and cosmopolitan in the long term,” says Alessandra Pellegrino, the Milan-based fashion features editor for Italian Glamour magazine. “It subtly recruits designers at a tender age and leaves a welcoming impression on them.  When the best ones later decide to leave their countries for a bigger stage, I bet some of them know instantly which fashion week they want to choose."

According to Orsini, a number of designers who were first discovered at the IFS do now participate at London Fashion Week or London Collections Men.  “There’s Mich Dulce in millinery and Lorico in knitwear, who are both from the Philippines, and Rory Parnell Mooney doing menswear from Ireland as well as Charini in lingerie from Sri Lanka. They all launched at the IFS,” she says. 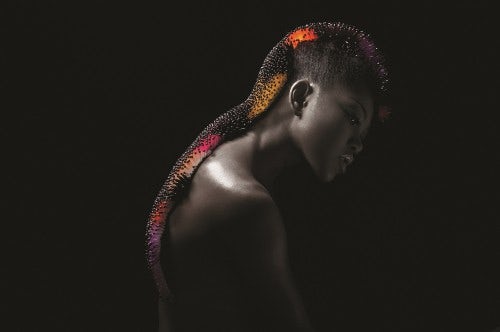 Headpiece by Ken Samudio, a designer from the Philippines who presented at the IFS during London Fashion Week | Source: Fashion Philippines

Julie Gilhart, a prominent fashion consultant and former fashion director for Barney’s New York, says that the IFS does something that the international programmes at other fashion weeks don’t.

“It's critical in this business that you establish relationships early — which is exactly what London is doing. What's good about the IFS is it allows us to see different countries that aren’t necessarily on the fashion radar [yet]. South Africa, the Philippines and Colombia were just a few that had excellent showings this season,” she says.

Robin Schulié, the buyer for Paris-based Maria Luisa boutiques says that “one valuable thing it does is help bring to light designers that aren’t part of ‘the usual circles’. Most of the other contests and systems of support in Paris like ANDAM or the CFDA/Vogue awards in New York only spotlight emerging brands that have already been ‘recognised’ by very small elite circles. Somehow even competitions like ITS in Italy and Hyères are the same because they tend to only focus on designers from certain schools.”

“The Colombian selection at the IFS was very enlightening in that way, I think, because you had totally unexposed young Colombians with real technique and interest like Miguel Mesa, and some from more ‘traditional circle’ types like Julia Mannisto who is a Colombian educated at St Martins,” he adds.

It was Colombia that won the 2015 IFS Country Award while Mannisto walked away with the Designer Award. This year’s Curation Award was presented to Yegwa Ukpo of Nigeria and designer special mentions went to Maxhosa by Laduma from South Africa, Ken Samudio from the Philippines, Miguel Mesa of Colombia, Alexandru Nimurad and Vika Tonu from Romania and Rok Hwang from South Korea.

Despite being billed a cultural exhibition for the public, Orsini says that the IFS now draws in retail buyers who end up doing business with designers they discover at the event. “We’re still collating the final [sales] results but I know of designers from Colombia and the Philippines who attracted orders from important Asian and American stores this year,” she says.

Maxhosa by Laduma is one brand that insiders say is being closely followed by scouts from at least two of the other big fashion weeks — but London’s assertive approach has the designer thinking. “The IFS was enlightening, a good introduction to the London fashion community for me. I feel like I have my foot in the door here now,” says Laduma Ngxokolo.

While the other fashion capitals often attract much bigger international names than London — think Sacai in Paris, Delpozo in New York or Uma Wang in Milan, organisers there tend to focus on scouting and incentivising talent on a case by case basis using affiliates.

Those familiar with such negotiations say that fashion weeks use an arsenal of tactics and sweeteners to lure in designers from strategic markets. Typically this includes an attractive slot with good visibility on the show schedule and behind-the-scenes introductions to sponsors and award panels as well as access to key influencers who can support the designer outside of an official fashion week capacity.

“As a lot of designers are knocking at the door to get into the fashion week calendar, we don’t have a ‘scouting strategy’ to list new names, even though we consider every request with the greatest attention,” says Stéphane Wargnier, executive president of the Fédération Française de la Couture which organises Paris Fashion Week.

Instead, Wargnier points to the federation’s links with the main “off calendar” scouting competitions based in France like the Hyères Festival, the ANDAM and the LVMH Prize. “All those elements give together a very large range of opportunities for emerging [international] talents to find their right positioning in the French showcase,” he adds.

In New York too it has been independent initiatives which have helped the city gain greater international reach like V-Files, known for its user-generated approach curating young designers from the internet into a group show during fashion week.

“New York Fashion Week mirrors the unique cultural landscape of the city, and we take a lot of pride in identifying emerging designers from all over the world and offering them a global platform to showcase their talent. Last season alone, IMG featured designers from 20 different countries in standalone shows,” she says.

Jane Reeve, the chief executive of the Camera Nazionale della Moda Italiana, which organises Milan Fashion Week, concedes that it is probably the least international of the four major fashion weeks, but says she too has stepped up international scouting over the past few seasons.

“First and foremost, my responsibility lies with supporting and nurturing the Italians,” she says. “But of course we’re looking globally because this is a global business so we’ve brought in Korean designers for example. When we scout we have to choose international destinations that can stand up to the high quality Italian brands that make up our showcases in Italy.  London is young so having that sort of big international event is a good marketing ploy that animates the fashion week. Our strategy is different because I’m interested in international quality, not quantity.”

It is nevertheless interesting to note that the forerunner to London’s IFS event was a pioneering initiative launched in Italy in 2011 when Pitti Immagine started its Guest Nation programme featuring designers from Brazil, Nigeria, Japan, Denmark, Turkey, Ukraine and South Korea.

“When I first suggested some of these nations, few people were really looking at them even though they had an incredibly wide scene with lots of talented designers,” says Federico Poletti, a former consultant for Pitti Immagine who worked on the project for five years and who has collaborated with Vogue Italia’s senior editor Sara Maino on the international Vogue Talents initiative.

“For sure the IFS is an important event [but] London is not the only city that gives attention to young designers,” says Maino. “The fashion capitals each find and support international designers in different ways and that’s what is important.”