Some of the world’s largest fashion brands are creating branded hotels and private residences as well as the homewares to fill them, tapping easy additional revenue streams and constructing powerful brand beacons in emerging markets.

LONDON, United Kingdom — As you enter the Armani Hotel in Dubai, your eyes swiftly adjust to the low lighting, which dances across a space rendered in marble, lacquer and wood. It’s almost as if you were entering a temple to the brand. And, like all great temples, the experience is carefully programmed to cultivate and communicate a particular gospel. But more than a church to Armani, the hotel in Dubai, along with a second Armani Hotel in Milan, both function as elaborate showrooms, designed to display a wide range of homeware products from Armani/Casa, the company’s foray into the luxury home and furniture market, which, according to the Boston Consulting Group, was worth $60 billion in 2013, $10 billion more than the luxury apparel market.

“My first creation was the Logo lamp in 1982, but Armani/Casa was founded in 2000 to support the strategy I was developing, allowing the company to have access to the market for high-end products for the home, where fashion buyers and a larger potential audience can be found,” Mr Giorgio Armani told BoF.

With a total of 53 doors, comprised of 31 monobrand stores and 22 shop-in-shops in over 40 countries, Armani/Casa is one of the most established homeware extensions launched by a luxury fashion brand, but it is by no means the only one. In recent decades, numerous fashion houses have entered the lucrative luxury homeware market. Ralph Lauren launched Ralph Lauren Home Collections back in 1983. Others have since followed suit, including Bottega Veneta, Hermès, Missoni, Roberto Cavalli and Fendi, which launched homeware in 1989 and currently has eight dedicated homeware stores and a significant distribution partnership with wholesaler The Luxury Living Group.

“Experiential luxury is growing faster than personal goods luxury and home collections and resorts are a good bridge within the two worlds,” explained Mario Ortelli, senior vice president of European luxury at Sanford C. Bernstein, an asset management firm. “Ralph Lauren started this business before [others] and has a wider product offer. Moreover, it is more exposed to home textiles e.g. bed linens, towels, etcetera than other brands, which are more high-end and more exposed on furniture, such as Fendi, Armani and Versace.”

Versace Home was launched in 1992, “In terms of commercial strategy, our aim has always been to reach out to our discerning clients both through Versace Home flagship stores, as well as dedicated corners or shop-in-shops that could present the collection and, at the same time, allow a 360-degree experience of the Versace lifestyle,” said Versace’s chief executive Gian Giacomo Ferraris. 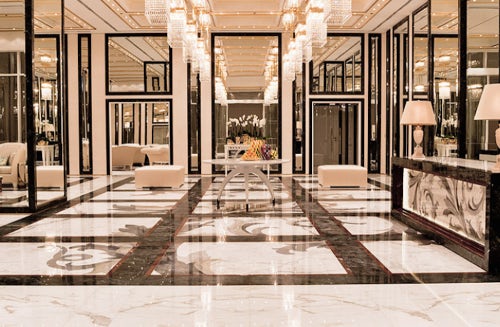 Many of the products that comprise the homeware lines of luxury fashion brands are manufactured and sold through licensing agreements. “[It is] often licences, as the distribution of the home collections is mainly through widespread multi-brand furniture and homeware shops and, therefore, having a partner with a good distribution platform in these channels is key,” explained Ortelli. “Missoni has an agreement with T&J Vestor; Versace produces its porcelain in licence to Rosenthal; Armani/Casa has a licence agreement for home textiles with Rubelli.”

These licensing agreements allow fashion brands to generate a nice additional revenue stream without taking on operating costs. Armani declined to reveal the size of its homeware business, but according to Ortelli, these lines typically generate no more than a “low single digit” percentage of overall revenues and their market share remains small in comparison to homeware players such as Roche Bobois and B&B Italia.

Versace Home, with 100 points of sale across the world, is one of the most successful homeware lines launched by a fashion brand. Yet, according to figures provided by the company, the business generates only 8 to 10 percent of Versace’s overall turnover, implying annual revenue in the range of €40 to €50 million (about $49 to $62 million).

Though not negligible, the scale of these businesses as a portion of the $60 billion luxury home market remains small. Nonetheless, like Armani, Versace has also entered the hotel market, lending its name to sprawling properties in Dubai and Australia’s Gold Coast. “Versace Home’s key markets are currently Asia Pacific and the Middle East, where we estimate an increase of our business, thanks to the opening of the new Palazzo Versace in Dubai,” said Ferraris.

Agreements between fashion brands and hotels generally take the form of franchises or licences. “The most famous collaboration in hotels is the partnership between Marriott and Bulgari, in which Marriott works with Bulgari through a franchising agreement,” explained Ortelli. “The entrance of these brands into [hotels] has increased the attention of the consumer on [homeware] product and contributed to inducing some consumers to trade up in these products.”

Having begun with product lines adjacent to apparel, such as bedding and linens, in the 1980s and 1990s, fashion houses have since moved into everything from carpets, chairs, tables, glassware and dinnerware to full kitchen and bathroom installations, and are now partnering up with property developers to bring their brands to the design of exclusive private residences. “Through the interior design studio, under the direction of Donatella Versace, a team of architects and interior designers of the maison delivers the Versace style into exclusive private residences” at The Plaza Hotel in New York, the Al Jawharah Tower in Jeddah, The Milano Residences in Manila and the Damac Tower in Beirut, said Ferraris.

Fendi has also been particularly active in designing the interiors of private residences, including oceanfront mansions at Acqualina in Miami, apartments at Trump Towers in New York and Miami, the Damac Residences in Dubai, and numerous other projects, including the outfitting of 98-foot Princess Yachts. The brand has also lent its imprint and design savvy to yacht clubs and hotels. 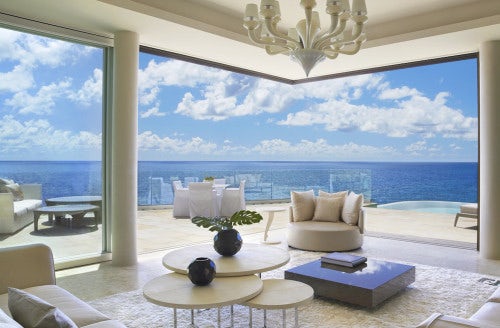 Similarly, the Armani/Casa Interior Design Studio provides interior design services to private individuals and property developers, accounting for 30 percent of Armani/Casa’s total revenue, according to figures provided by the brand. Residences fully designed and furnished by Armani are located in some of the worlds most high profile building projects, including the Burj Khalifa in Dubai, Maçka Residences in Istanbul, The World Towers in Mumbai and Century Spire in Manila.

Interestingly, the cachet of the Armani brand adds a significant margin to property prices in certain real estate markets. London’s Telegraph newspaper reported in July that Armani penthouses in Dubai were selling at 28 percent more than an equivalent, non-branded penthouse in the city.

“Working on an apartment, or an entire building, is a huge undertaking. It is a fascinating work that inspires me a lot, but it is also complex. I must admit that after a few years of work, the experience is starting to pay off in this field,” said Mr Armani.

A private residences project in Sunny Isles in Miami will be Armani’s first such venture in North America. But, unsurprisingly, the bulk of these projects are being built in emerging markets.

“The majority of major European cities already have mature and modern skylines. Emerging cities are currently building their own,” explained Mr Armani. And, indeed, along with the brand’s high-visibility hotels, these luxury residences, more than simple stage sets for homeware, also act as powerful, sky-scraping brand beacons, with the power to indelibly write their message into the emerging skylines of fast-growing economies.

According to Mr Armani: “The real estate projects in which we were or are still actively involved in emerging economies help our brand to gain a dominant share in the luxury market at an early stage of its development.”