Empowered by Obama’s favourable trade policies toward Cuba, Clandestina became the first company out of the Island to run an online shop in the US while maintaining is headquarters in Havana. But under President Trump, the brand faces a slate of uncertainties.

Empowered by Obama’s favourable trade policies toward Cuba, Clandestina became the first company out of the Island to run an online shop in the US while maintaining is headquarters in Havana. But under President Trump, the brand faces a slate of uncertainties.

NEW YORK, United States —  Like any budding brand on the internet, Clandestina deals with the high cost of marketing, tech issues in its online store and figuring out how to scale.

One challenge is unique to them: how to navigate America’s roller-coaster relationship with Cuba. Until 2015, Havana-based companies like Clandestina, which sells graphic T-shirts and recycled garments, were prohibited from operating in the US. That year, President Barack Obama loosened trade restrictions, part of a general rapprochement between the two countries’ governments after longtime Cuban leader Fidel Castro stepped down in 2008.

Clandestina, founded in 2015 by Idania del Rio and Leire Fernandez, was one of the first fashion brands to take advantage of the friendlier climate. The company opened its first store in Havana in 2015, with the vast majority of sales coming from tourists. Customers included hordes of Americans who were legally permitted to visit the Caribbean island for the first time. The brand set up an online store in 2017. A pop-up is currently open Brooklyn this summer.

But the brand's livelihood began to be challenged after President Donald Trump was elected. Since 2017, Trump has reversed many of Obama’s policies toward Cuba, limiting private trips as well as business relations with companies with connections to Cuban intelligence. Last week, he banned US cruise ships and other forms of group travel to Cuba.

These measures have cut Clandestina’s sales in half, according to del Rio. American customers can still buy the brand’s clothing online (the website is operated by a US-registered company), but e-commerce contributes only 12 percent of total revenue.

“Because of Obama we are here right now,” del Rio said, sitting cross-legged in a massive Soho loft (a customer-turned-friend’s place, she notes). She and her partner Fernandez, who are in town for their pop-up event, which runs through June 24. “But [with] Trump, he says he wishes well for Cuban entrepreneurs but everything they’re doing is harming the Cuban entrepreneurs.”

Clandestina may be one of only two Cuban companies that are exporting to the US under Obama-era regulations, said Matthew Aho, a special adviser at Akerman who is working with the brand on a pro bono basis.

“This had never been possible before,” he said.

US presidents have broad power to adjust economic sanctions. While Obama was in office and favoured closer relations with Cuba, it was relatively straightforward to convince American companies to participate in then-unprecedented commercial transactions, such as wiring money to the island, Aho said.

“Now, all of that certainty is gone,” Aho explains. “The Trump administration ... could, overnight, remove the authorisation that allows American businesses to import from Cuban entrepreneurs.”

As part of Obama-era changes to federal regulation, American businesses are able to import goods from Cuban entrepreneurs at a steep tariff rate of nearly 90 percent. The products that Clandestina sells online are made from both Cuba and the brand’s manufacturers in North Carolina and Florida, according to Fernandez and del Rio, and that despite the high tariff, the company is profitable. Products sold in their Havana store are all made in Cuba.

We live in a contingency plan.

The founders said if Trump shuts down US-Cuba trade entirely, they will rely more heavily on their American manufacturers for the products sold online. For now, the two are getting by, but not without hiccups: in December, Shopify shut down its invoicing, citing trade with Cuba as the offence.

“We live in a contingency plan,” del Rio said, laughing.

The duo have a high-powered friend in Google, which is bankrolling the Brooklyn pop-up.

Google first approached the brand after seeing a poster by Del Rio that depicts the Google Chrome dinosaur chewing through an internet cable — a visual representation of her frustration toward Cuba’s sparse wifi.

Google executives loved the design so much that the company lent Clandestina the right to use the T-rex logo on any product. 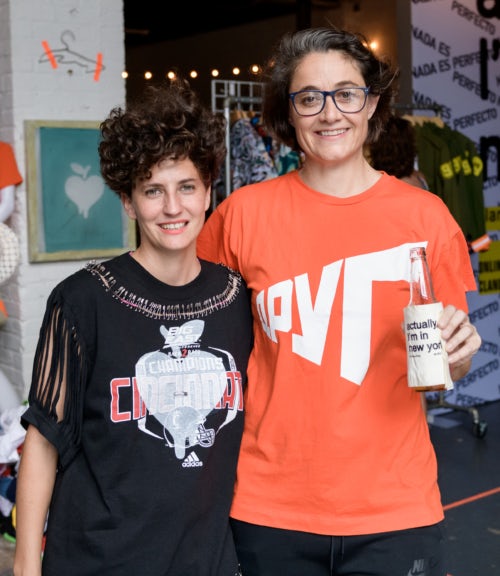 Not that Clandestina has many competitors. It calls itself Cuba’s first independent fashion label. And according to Aho, it’s the only Cuban fashion company that’s selling online to elsewhere in the world. The founders say that so far, it’s Americans that make up most of the e-commerce sales.

“There is like an organic community because there are a lot of Cuban Americans,” Fernandez said. “There are 2 million Cuban-Americans with a kind of nostalgia about Cuba.”

But Clandestina isn’t just about Cuba. Its cheeky graphic T-shirts often communicate political messages, and the company is outspoken about LGBTQ rights. Beyond the basic T-shirts, its products are made from second-hand or “upcycled” materials.

“Cuba is an important part of our brand but we are bringing something else that’s like ‘New Cuba,’ with new values connected to upcycling and resilience,” del Rio said. “If we can try to deliver that message, maybe we can scale.”

Editor's note: This article was revised on 15 June, 2019. A previous version of this story stated that Google had given Clandestina free ads. This is incorrect.