Despite the rising importance of digital touchpoints, brands and retailers are still pouring money into elaborate holiday windows. Why?

Despite the rising importance of digital touchpoints, brands and retailers are still pouring money into elaborate holiday windows. Why?

LONDON, United Kingdom — Holidays sales are critical to retailers. For retailers in the US, the world’s largest consumer market, 25 percent of annual sales happen during the holiday season, according to market research firm NPD Group. And since the 1870s, when Macy’s created one of New York’s first holiday window displays, these festive feats of visual merchandising have become not only a seasonal tradition, but powerful marketing devices.

“It’s a lengthy process filled with perfection and precision,” says Alex Wells Greco, who leads visual merchandising at Harrods, on the process of creating the London store’s holiday windows, which often feature elaborate sets and fanciful themes. Indeed, fashioning holiday window displays can be a year-long endeavour, costing hundreds of thousands of dollars and upwards, and often beginning before last year’s windows are taken down. But with the rise of the Internet — digital touchpoints now influence three out of every four luxury purchases, according a recent study by McKinsey — why do brands and retailers still invest so much time and money in window displays?

For one, festive windows still influence 24 percent of holiday purchases, according to NPD, while the best ones can become must-see destinations for tourists and local residents alike. “Our Christmas windows pull tourists from far and wide. They’re the first thing they see, so they’re hugely important for attracting business,” says Janet Wardley, Harvey Nichols’ head of visual display. Roe Palermo, divisional vice president of merchandise presentation at Lord & Taylor, says, “During the holiday season, over 500,000 people pass by our windows daily, so it’s important that they can tune out the chaos of the city, just for a few minutes.”

“There’s a lot of talk these days about ‘experience’ as key to positively differentiating brick-and-mortar shopping from online,” adds Linda Fargo, Bergdorf Goodman’s senior vice president, women's fashion director and store presentation, who has styled the store’s windows for nearly 20 years. “Given the inherent abstraction of digital retail, there’s an increasing attraction to actual and physical experience. It’s rooted in memory and simple pleasures, like delight and surprise, especially important emotions during the festive season.”

The New York department store spared no expense to ensure the tableaux in its windows dazzled this year with the help of Swarovski, who provided over 7 million crystals for display. “Great holiday windows, at their best, drive much more than merely sales. They can create long-term affection for the store and give one a view into the heart of a brand,” continues Fargo, adding that this year’s windows took a full year and a team of 100 people to take from concept to completion. “This kind of bond-building simply isn’t possible on the screen.”

“[Windows] sell product, but they also tell a story,” says Faye McLeod, visual image director at Louis Vuitton. “For me, it’s like creating art. Every day, the blank sheet of paper that stares back at me is five walls and a pane of glass. It’s the perfect canvas to create something modern, youthful, elegant, luxurious or tongue-in-cheek. At Louis Vuitton, we think it provides an amazing opportunity to connect with people on the street — whether they are clients or not — and have a conversation,” continues McLeod. “No doubt, creating physical windows takes more resources and has less reach in some ways than a website. But good windows can make a powerful impact in the digital age.”

Indeed, the impact of holiday windows is often amplified online, when consumers take and share images of the displays on social platforms like Instagram or Facebook. "Windows may not seem to be a part of this digital age as it goes back to the earliest times of retailing in stores, but it actually does utilise digital in a strong way. Selfies and social sharing of the window visit are a big part of the communication of the brand at holiday. 'Here we are at Macy's' or 'Saks' shots fill the pages on social media. [It's] a great way to get in the brand on top of the mind game," says Marshall Cohen, NPD's chief industry analyst.

“In today’s retail environment, the line between online and offline is more blurred than ever," adds Nadja Swarovski, member of the Swarovski executive board. "It’s important for brands to continue inspiring people in the real world, as well as providing engaging information and experiences online, so that consumers feel confident with their choices."

Here are some of this year’s best festive window displays. Which windows do you like most this season? Let us know in the comments below. 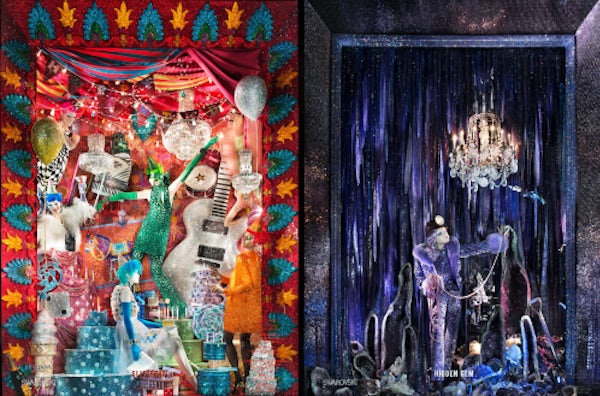 In honour of Swarovski’s 120th anniversary, the New York department store teamed up with the fine jeweller to create five holiday windows crafted around the theme “Brilliant Holiday.” Featuring over 7 million Swarovski crystals, the displays include ‘The Crown Jewels,’ featuring crystallised suits of armour and ‘The Crystal Cavern,’ depicting a prismatic amethyst cave — all of which showcase custom clothing created by three of the store’s designers: Johnson Hartig of Libertine, Naeem Khan and CD Greene. 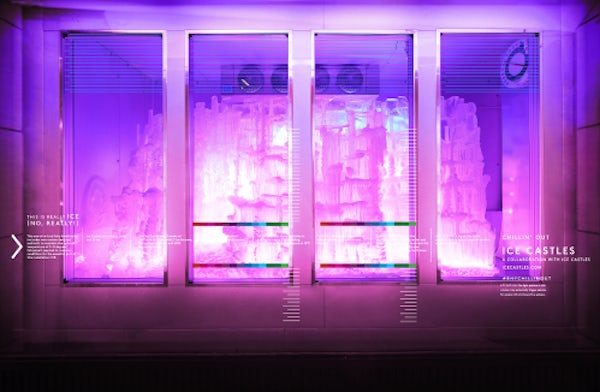 This year Barney’s theme — ‘Chillin’ Out’ — included a group of Okamoto Studio’s artists sculpting winter animals from inside the Madison Avenue flagship’s windows, which passers-by can watch. “We really wanted to keep our tradition of integrating a performance element into the windows; we felt like it elevates the entire experience,” says Dennis Freedman, creative director of Barneys. There are two key displays: ‘Arctic Chase,’ which features a group of crystal penguins traversing an icy race track in miniature 3D printed Lexus cars, and ‘Winter Brilliance,’ made up of 700 pieces of hand-blown glass, by sculptor Dale Chihuly. 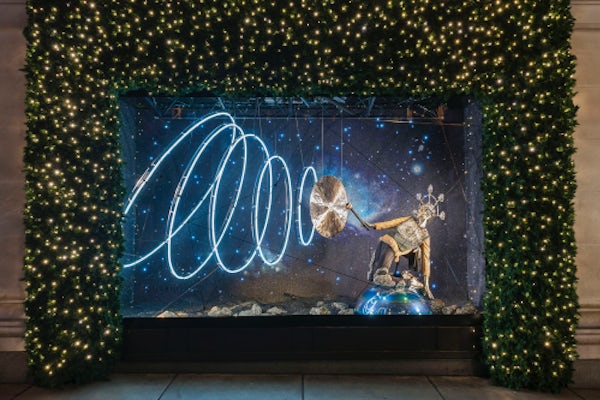 Selfridges’ astrological theme — ‘Journey to the Stars’ — sees the 12 windows of its London’s Oxford Street store depicting the different star signs and illuminated by over 400 metres of neo lights. Two scarlet red mannequin dressed in Alaia and Dries Van Noten represent Scorpio, while the ‘Free as a Bird’ Sagittarius display features a set of iridescent, colour-changing feathers. 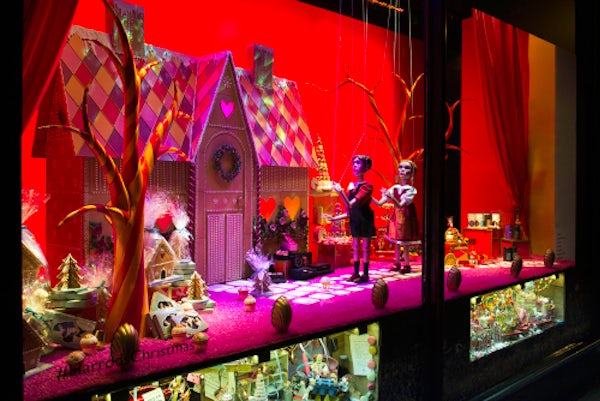 This year, the windows at Harrods have been designed to replicate theatre sets, with red velvet curtains, spotlights and festive décor, while the London department store’s second set of smaller windows, installed two feet above the floor, feature Peter Pumpernickel, the toy mouse that was the star of last year’s campaign. One display also includes a gigantic gingerbread house that took 33 hours of baking, 20 hours of hand-piped sugar detailing and stands at over 4 feet tall. 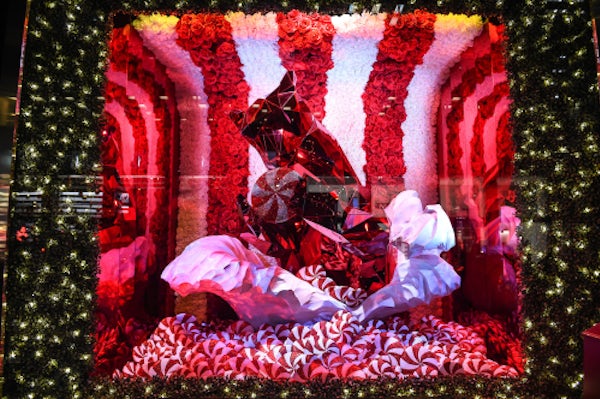 Bloomingdale's has partnered with celebrity florist Jeff Leatham, who has worked with luxury brands like Tiffany and Alexander McQueen, to create a sensory holiday window experience. Instead of displaying merchandise, “our holiday windows take onlookers on an interactive journey to discover how sight, sound, touch, taste and smell shape the holiday experience,” explains Jack Hruska, Bloomingdale’s executive vice president of creative services. Displays include a pine-scented Christmas tree, and a collection of boiled red and white sweets, which are accompanied by a peppermint smell dispenser. 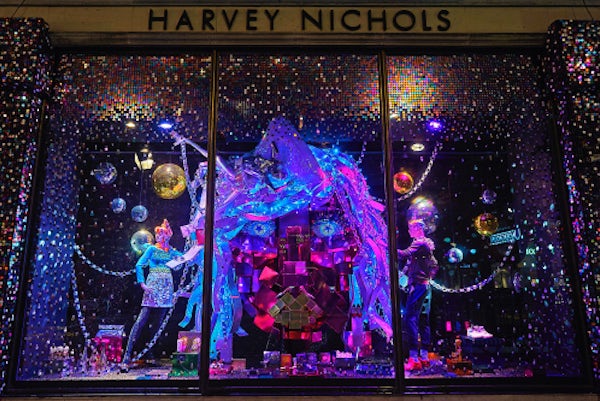 Harvey Nichols’ Studio 54-themed Christmas windows required one million glitter flakes, 300,000 sequins, 15,000 gift boxes, 620 mirror balls and 540 baubles to create. “We look to the catwalks for inspiration,” says Janet Wardley, Harvey Nichols’ head of visual display, of the decision to chose the iconic ‘70s nightclub as inspiration. “Following the shows, it was clear that the main trend for Autumn/Winter 2015 was Studio 54.” Alongside brands such as Christopher Kane, Lanvin, Alice & Olivia, Mary Katrantzou, Charlotte Olympia and Paul Andrew, the windows feature giant faces constructed from gift boxes with strings of fairy lights for hair. 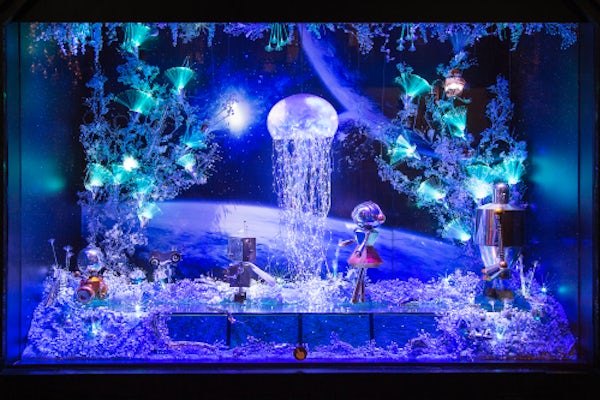 This year, Galeries Lafayette’s holiday windows tie-in to the newest film in the Star Wars franchise (premiering in December) and feature a robot family from the imaginary planet Scopi, about 2,450 light years away from Earth. The windows depict the journey of a small robot, Leon, and his friend, Lumi, who spy the light of a Christmas ornament through a telescope and go in search of it: “Two of our windows are interactive while several others have digital screens that are part of the set,” said a spokesperson for the Paris department store. 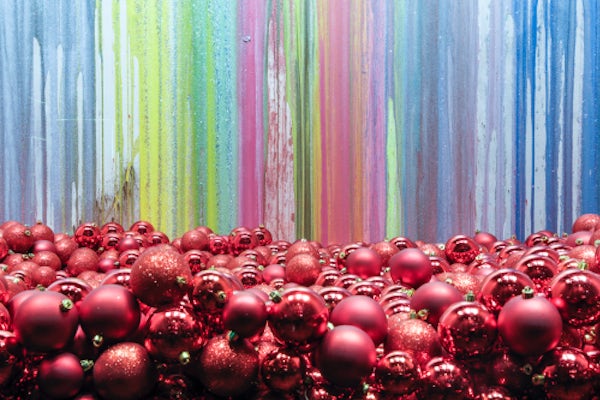 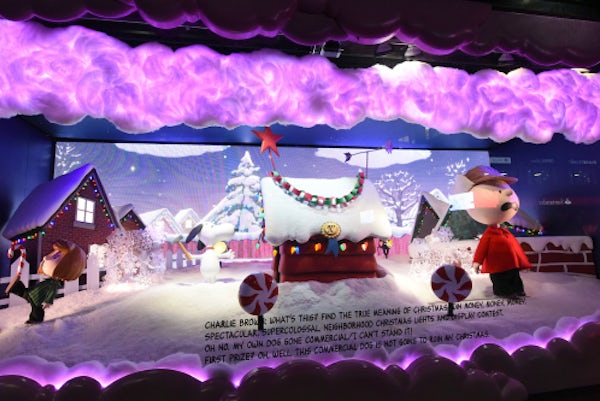 Ahead of the release of a new CGI Peanuts movie in 2016, Macy’s celebrates the 50th anniversary of iconic holiday special ‘A Charlie Brown Christmas’ with its windows. Designed by Macy's national director of windows Roya Sullivan, the store’s six window displays feature key scenes from the 1965 classic, with large figures of the Charles Schulz gang, including Charlie, Lucy and pet beagle Snoopy. 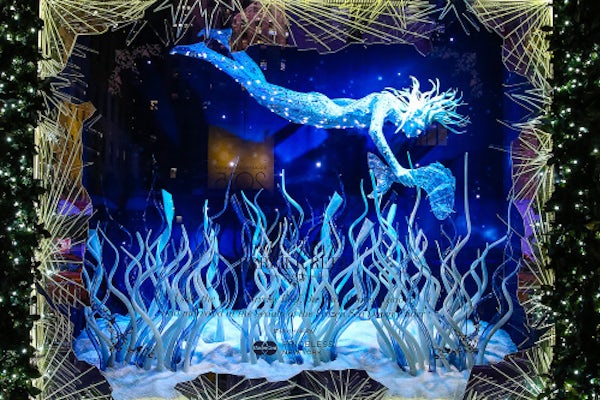 The New York department store’s ‘The Winter Palace’ spans the length of a block and features 225,000 crystal lights. The display consists of towering light icicles, crystal palace spires and snowy magnolia arches that represent the “six wintry wonders of the word,” says Mark Briggs, executive vice president, creative of Hudson’s Bay Company. They include a frozen Eiffel Tower and ‘the Great Brrrrrier Reef’.