The art wall’s allure as a social media-worthy photo op has been embraced by retailers as a marketing opportunity. Does it convert into sales?

The art wall’s allure as a social media-worthy photo op has been embraced by retailers as a marketing opportunity. Does it convert into sales?

NEW YORK, United States — It’s taken the ubiquity of a new medium — Instagram — to revive an old one: hand-painted murals.

Over the past two years, retailers ranging from Adidas to Gucci have commissioned highly visible murals that are part ad, part art — and ideal Instagram bait.

On May 31, Paul Smith temporarily converted its now-famous pink Melrose Avenue exterior into a rainbow as part of an international Pride project with Instagram. Figures as diverse as Hillary Kerr, actor Victoria Justice and Los Angeles mayor Eric Garcetti posed in front of the mural, garnering more than 323,000 combined likes and views. It was the first time the #pinkwall (which boasts more than 60,000 Instagram mentions) had been altered since the store’s 2005 opening.

That same day, Kendall Jenner posted an Instagram video announcing her Adidas ambassadorship in front of a mural, which attracted more than 7.9 million views. Soon after, Adidas launched a three-week outdoor art project across 10 walls in Brooklyn to promote its campaign for the Pure Boost DPR shoes; at last count there were 110,712 Instagram posts featuring the #pureboost hashtag. 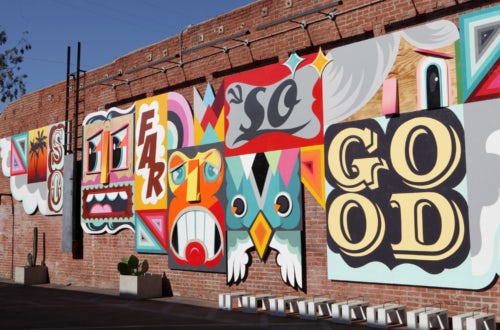 Other examples include a mural by Givenchy featuring a topless, photorealistic Candice Swanepoel (the model’s Instagram post sharing the finished work garnered more than 200,000 likes); wall art portraying real people from The Kooples, whose Instagram post of the work-in-progress got more than 2,500 likes; a Chanel cosmetics mural featuring Lily-Rose Depp (the hashtag #ilovecoco has been used 32,600 times); and Gucci’s year-long “Art Wall” project, which began in February at New York Fashion Week and has featured a rotating crop of artists including Coco Capitán and Jayde Fish.

Regardless of content, the effect is the same: millions of social media impressions. But whether the murals have directly impacted foot traffic or increased sales for retailers — or if that is even a goal — is less clear.

Detroit-based Shinola has used hand-painted outdoor advertisements since its launch in 2011 because they reflect the brand’s theme of championing craftsmanship and creating objects by hand, according to company president Jacques Panis. “The murals add a bit of soul to our [outdoor] advertising,” he says.

The exterior wall of Shinola’s Miami store has a quarterly rotating art installation created by local organisations that celebrates the neighbourhood’s street art culture. Panis says they have been “really popular” on social media, where the brand documents the process of installation (a recent video has more than 6,800 views). 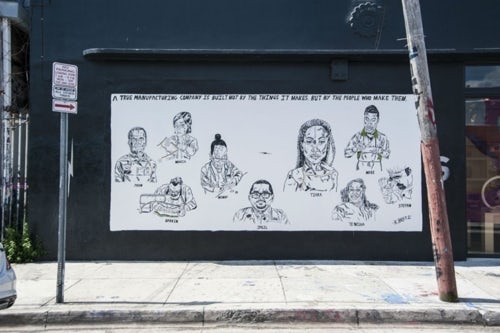 A mural by Kelly Breez at the Shinola store in Wynwood, Miami | Source: Courtesy

Shinola’s goal with the murals is brand awareness in and around its key markets; the art is designed to inspire people to take photos and selfies. According to Liz Fermon of MullenLowe Mediahub, Shinola’s media agency, outdoor advertising makes up a big part of the brand’s media buy.

At Paul Smith, the reaction to the rainbow wall was “overwhelmingly positive,” according to the brand, in addition to having a positive effect on foot traffic and sales for its three-week duration. At the end of LA Pride, the exterior wall of the store — which sells exclusive “Melrose Pink” merchandise — was returned to its former hue.

Brands often include hashtags in wall art to marry the analogue experience with the digital world, a major challenge for brands, says Gil Eyal, chief executive of influencer marketing platform Hyprbrands. “Commissioning outdoor murals or having influencers post from events is an attempt to connect the real world with social media, and in certain cases, it can be pretty effective,” Eyal says. However, measuring the impact of a mural can be difficult, he concedes, “especially on Instagram, which doesn’t provide traditional metrics like number of views, audience demographics and any way to connect between the audience that saw the content and the audience that ended up engaging with the brand in ‘real life.’” 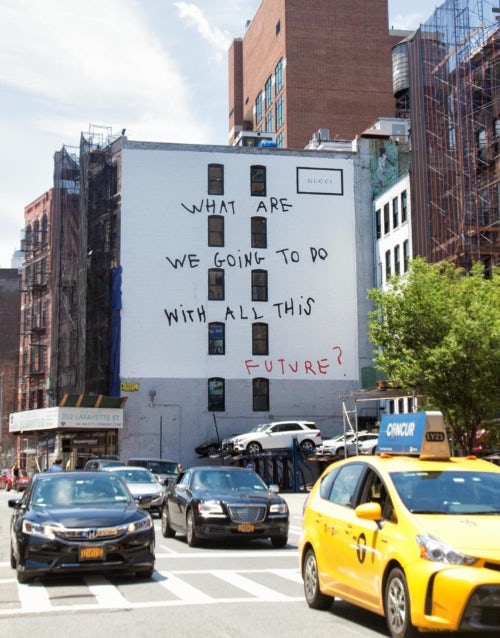 RewardStyle, which helps fashion influencers earn money through posts, has commissioned a series of murals by local artists in cities including Austin, Dallas, London, Los Angeles and Chicago to promote its LiketoKnow.It app. Each “He(art) Wall” includes the project’s hashtag, #StartedWithAScreenshot (the hashtag is featured on almost 8,000 posts, many with thousands of likes each).

“There is a constant stream of influencers outside of the businesses [that host the murals] and they are promoting the destination to millions of highly-engaged followers,” says RewardStyle president and co-founder Amber Venz Box.

Venz Box says the payment structure varies by project, and that many businesses have approached her in the hope of hosting a mural. In turn, she adds, participating artists are delighted by the exposure. “To have all of the top influencers in the city posting your work is an artist's dream,” she says.

The 2,500 square-foot space in New York’s Soho that is currently hosting Gucci’s Art Wall is owned by Colossal Media, whose clients include Chanel, Givenchy, Coach, Shinola, J. Crew and Target. The company’s most iconic spaces can cost up to $99,000 per month, with installation fees costing around $16,000. In the case of Gucci’s Art Wall, the brand chooses the artists and agrees the design, then Colossal’s in-house team paints the art.

“When a consumer sees our walls, they think art first, ad second and are drawn into the brand message,” explains Colossal Media managing director Kelly Peppers, who says fashion is the company’s fastest-growing vertical. An early project for Barneys in 2009 was “a turning point,” she says, in that it demonstrated that hand painters could create “photoreal” ads with models. Vans, H&M, Comme des Garçons, Desigual, Armani, J. Crew and Cole Haan followed suit, but since the Gucci project, she says, “the phone has been ringing non-stop.” 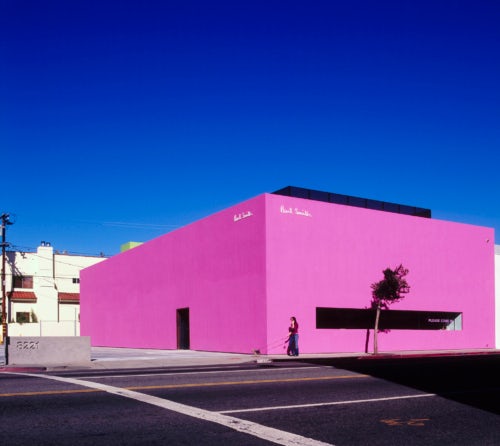 The company has rights to paint on locations in Los Angeles, San Francisco, Chicago, Boston, Austin and Atlanta. Peppers says that Colossal has been "shying away" from painting on or inside retail locations in favour of “media spaces,” in part because her painters can’t keep up with demand, and because a painted storefront is not likely to generate the same interest as a media space.

Rag & Bone does both. It started with the exterior of its store at 73 East Houston Street in New York’s Nolita in 2011. Artists pitch ideas for the side of the store, and the brand pays for paint and travel expenses. The art changes monthly.

“It’s nothing to do with marketing… it’s just something that makes the neighbourhood a more inspiring place to be. It supports the arts and that’s incredibly important at the moment,” says Rag & Bone chief executive, founder and creative director Marcus Wainwright. “It’s not about how much it costs versus a traditional campaign, because there are completely different end goals. But in terms of cost, you can spend one million on a photography campaign, but a can of Krylon is $10.”

Rag & Bone has since extended the street art theme to stores in New York’s Tribeca, Los Angeles’ Abbot Kinney Boulevard, and London. Wainwright says customers often request shirts and prints, and in June the brand introduced a limited-edition sweatshirt with a graphic by that month's artist.

Wainwright doesn’t use Instagram so can’t speak to the popularity of the #houstonproject hashtag, though to date, it has generated 911 posts, with the most popular getting almost 4,500 likes. “The draw was to make the store visually interesting, even if you took the clothes out of it,” Wainwright says. “It’s all coming from the same place, which is authenticity and craftsmanship and generally supporting the arts… that analogue human experience, which is missing in some instances these days in the digital world.”