NEW YORK, United States — At a preview of their Pre-Fall 2017 collection, Creatures of the Wind designers Shane Gabier and Chris Peters had plenty to chat about — from new, waist-skimming silhouettes to a fabulous psychedelic print intarsia-ed onto a luxe fur coat — but they quickly homed in on a series of hand-embroidered looks. In particular, the deadstock army jackets and utilitarian shirting decorated with daisies, Victorian hookahs and several different varieties of cannabis plants, culled and redrawn from their “endless” archive of botanical prints. “Every single store is buying it,” Peters said.

Hyperbole or not, the heady days of pot-as-fashion are upon us, with Alexander Wang, Baja East, Jeremy Scott and others working cannabis motifs into their designs. It’s really no surprise, given that, even in the wake of the election of Donald Trump to the office of President of the United States, many leaders in the marijuana community believe that the drug is on the path to federal legalisation.

As of November 9, 2016, medical marijuana was legal in 28 states as well as Washington, DC. Marijuana is fully legalised in eight states (and Washington, DC), including California, Massachusetts and Washington. (Although some of these laws will not go into effect immediately.) And, according to an October 2016 Gallup poll, 60 percent of Americans support the legalisation of marijuana, up from 36 percent in 2005 and 12 percent in 1969. 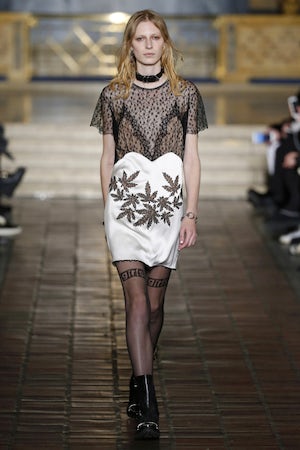 And yet, the opportunities for the luxury industry to capitalise on the legalisation of marijuana go far beyond incorporating a cannabis leaf into apparel designs. The first, most obvious, foray has been into accessories; vapourisers and pipes are now being reimagined through a high-design lens.

For instance, the e-commerce site Tetra — founded by three fashion and design-industry veterans — has earned accolades for its collection of modern instruments. “We started this because we realised the market didn’t have anything like it,” says Eviana Hartman, who started Tetra with partners Monica Khemsurov and Su Wu. “While there is a lot of innovation in the area, most of the players aren’t driven by aesthetics.”

Tetra, which launched in September 2015, saw a 40 percent increase in sales in October 2016 from the year previous. The retailer’s own collection, which includes a three-pack of rolling papers ($12), a simple pipe designed by New York-based product designer Jamie Wolfond ($65), and a white-bronze fog pin designed by Vancouver-based design studio Knauf and Brown ($36), is stocked at physical stores including ABC Home, Creatures of Comfort and Tenoversix. Other non-Tetra-branded items on the site include a $1,250 geometric table lighter and ashtray set handmade by Brooklyn-based glassblower Andrew O. Hughes and a $550 solid cast bronze seed bowl handmade in Chicago by interdisciplinary designer Steven Haulenbeek. According to Hartman, pipes and lighters remain the best sellers.

Just as flasks and cigarette cases have had designer makeovers in the past, it’s likely that pro-cannabis fashion brands will begin to create paraphernalia of their own (if they haven’t already). But if pot tchotchke is akin to a fashion house’s entry-level accessories, the marijuana itself is equivalent to a cash-cow fragrance. There is, after all, already a variant on the “OG Kush” strain of marijuana called “Gucci OG.”

“This is like fine wine, fine champagnes, fine cigars,” says Cheryl Shuman, a marijuana branding expert and founder of Beverly Hills Cannabis Club, which sells its high-end marijuana for about $700 an ounce. “It’s becoming more chic to talk about it. Like being part of a tribe, if you will.”

To be sure, wine and spirit companies — from Diageo, which owns Bulleit Bourbon and Cîroc, to LVMH, which owns Moët & Chandon and Veuve Clicquot — might look to branded marijuana as a new revenue opportunity in the not so distant future, especially as alcohol sales remain flat or decrease in the west. In 2015, global sales of alcohol increased by 2 percent, but the overall volume of alcohol consumed decreased by 0.7 percent — the first drop since 2001 — according to Euromonitor International.

“The growth trajectory for alcoholic drinks in the west has reached its finite limits and has been declining for a while now,” says Spiros Malandrakis, senior alcoholic drinks analyst at Euromonitor. “In terms of volume, if you look at margins across the west, cannabis could provide an escape route for multinational [conglomerates].”

In November 2016, Constellation Brands chief executive Rob Sands made news when he told Bloomberg that the beverage conglomerate was investigating opportunities in marijuana. “We're looking at it…” he said. "Why wouldn't big business, so to speak, be acutely interested in a category of that magnitude?"

In the US alone, the legal marijuana market is estimated to surpass $22 billion in annual revenue by 2020, according to a report by ArcView Market Research, with about 53 percent of the legal market coming from “adult,” or recreational, sales, not medical sales. In 2015, the legal market in the US reached $5.7 billion — about 8 percent of which came from adult sales — up 24 percent from $4.6 billion in 2014. ArcView projects sales of $7.1 billion for 2016.

Even with marijuana legalised outright in just eight states, there are already brands emerging that could be future prospects for acquisition. The most well known is Marley Natural, launched in February 2016 by Seattle, Washington-headquartered Privateer Holdings, a cannabis-focused private-equity firm that has raised $122 million in funding.

Named after Bob Marley through a 30-year licensing deal, Marley Natural — which, along with marijuana, sells personal care products and accessories — aims to be the Starbucks of marijuana, as some in the industry put it. “I think that comparison is premature, as they are a young company,” argues Katie Shapiro, an Aspen, Colorado-based journalist who covers style, travel and culture for online publication The Cannabist, and is also the digital editor Aspen Sojourner magazine. That being said, “It’s a beautiful line — a lot of their accessories and body care products I personally own and love.”

But if Marley Natural is on the path to becoming the Starbucks — or Heineken — of marijuana, what will be its Krug? Former Yoox Corp. president Clement Kwan is aiming to build just that with the early 2017 launch of low-dose line Beboe, the upscale marijuana brand he founded with tattoo artist Scott Campbell. Beboe, named after Campbell’s grandmother — who baked pot brownies for his mother when she was battling cancer — is just the first of what the duo hope will be several brands that live under the umbrella of For Success Holding, the company they founded in late 2014. Beboe will launch with two products: $25 pastilles infused with 5mg of THC/CBD and a $60 pre-filled vapouriser with low-dosage THC/CBD oil. (THC and CBD stand for tetrahydrocannabinol and cannabidiol, two active ingredients in cannabis.)

Cannabis could provide an escape route for multinational conglomerates.

“It’s really bringing a level of sophistication and fluidity to this industry,” says Kwan, who spent time working as chief operating officer of Privateer Brands and Marley Natural before beginning work on Beboe. However, Kwan’s experience with marijuana goes back to university; he put himself through UC Berkeley by cultivating and selling product to cannabis clubs, which were the preliminary model for modern dispensaries.

Kwan is now applying his luxury industry knowledge to the making, selling and marketing of marijuana. “It’s putting the customer first as opposed to the product,” says the executive, who also intends to open multi-brand stores in California. “Right now, it’s really product driven, but it’s missing the branded piece and the storefront itself. The retail experience is horrible, choppy. We need to build the experience.” 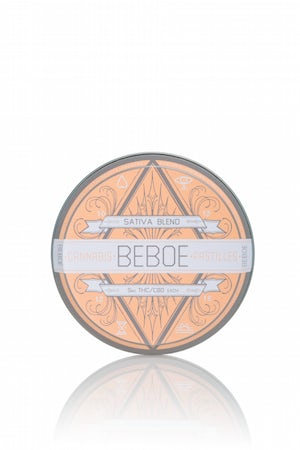 Kwan plans on building that experience through presentation (including distinctive packaging and experiential retail), customer service and a message that appeals to marijuana aficionados that wouldn't consider themselves “high-dosage stoners.”

Of course, brands like Beboe have more than a few roadblocks ahead of them. During the Obama administration, the path to federalisation in the US seemed possible, especially when the House of Representatives passed three amendments in 2015 to slash the Drug Enforcement Administration’s budget by $23 million, indicating that the end of prohibition was within reach.

While many agree that President-elect Trump is unlikely to fight the legalisation of marijuana on a state-by-state level, it is less likely that a federal law will be put in place in favour of legalisation during his administration. This means, broadly, that the US Postal Service will continue to be forbidden to ship marijuana products because it is a federal agency.

Marijuana companies are also not typically recognised by banks as legitimate businesses, meaning that the industry, for the most part, remains reliant on cash. That’s because financial institutions must follow federal laws — which ban marijuana — even if a state has legalised it. “The situation is not clear enough for a big multinational to get stuck in at the moment. I don’t expect them to be active for a couple of years until legalisation is federalised,” Malandrakis says. “But there is potential in the medium to long term. The way things are looking at the moment, I don’t think [legalisation] is reversible. History tells us that whatever happens in the US tends to slowly happen across the west and from that point, globally.”

And as, Shapiro adds, “There’s also a big boom on the lifestyle side with smoking accessories to enhance the experience.” These products, with stores like Tetra representing the high end, generate millions, potentially billions, of dollars a year in sales. The vapouriser market alone — which also includes products used to smoke tobacco — was valued at $3.5 billion in 2015 by Wells Fargo.

What’s more, the inability to ship product may in turn create a new sort of shopping tourism. Just as a certain contingent of consumers visits Paris to buy Louis Vuitton handbags, others might visit Los Angeles to indulge in their favourite pot product. Companies like For Success Holding also see opportunity in Canada, where the substance will be made legal in the spring of 2017. (It will be the first G7 nation to take this leap.) Globally, several countries — including Israel, Germany, Australia, and Spain — have made strides toward full legalisation.

For entrepreneurs like Kwan, the belief is that the momentum is only growing. “When the luxury conglomerates come in, or even people like the wine industry, they’re going to want people who have things that are already built out,” he says. “No one wants to recreate a wheel.”

Op-Ed | Is Fashion Ready for the Experience Economy?

Op-Ed | From Luxury to Craft: Climbing the ‘Discernment Curve’