When the store is a stage for selfies, the art of lighting is more important than ever.

When the store is a stage for selfies, the art of lighting is more important than ever.

LONDON, United Kingdom — Japanese artist Yayoi Kusama’s “Infinity Mirrors” is the most Instagrammed exhibition in the world. The popularity of the work, which conveys a feeling of cosmic hyper-reality, is a testament to the power of lighting and mirrors, a lesson that’s not lost on luxury retailers, for whom the right combination of the two can help fill stores with emotion — and drive sales.

“Lighting is 50 percent of store design,” says Simon Mitchell, one half of the duo behind Sybarite, the architecture firm behind stores for Joseph and Marni and several spaces at British department stores Selfridges and Harrods.

But old-fashioned approaches like keeping lighting bright, shining accent lighting on products and shutting out natural light (much like in casinos) are giving way to a new approach aimed at creating a well-lit stage for social media-friendly experiences. “You have to create memorable moments within the shopping experience and the right lighting is essential in creating shareable content,” adds Mitchell. 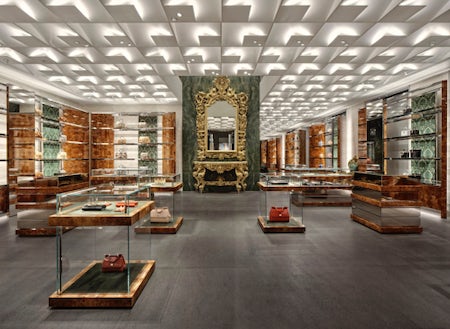 “Some of the behaviours that were previously reserved for outside of stores are now happening inside stores,” says Jeremy Bergstein, president of The Science Project, a retail innovation agency. “It’s important to think about how the store is lit.”

Nowhere is lighting perhaps more important — and directly linked to sales — than in fitting rooms, where a flattering glow is a must, especially as the fitting-room selfie grows in popularity. Here, LED lighting — once frowned upon for its hard-to-control colour and clinical tone — have helped, making it easier to create well-lit fitting rooms that are not too hot.

“Fitting rooms used to really cook the consumer,” says Mitchell. “But we used to have fluorescent lighting in the past and if you tried to take a selfie in the mirror of fluorescent light, you’d get a flare on the image. With LEDs, you don’t get any of that; you get an identical snapshot of the lighting and skin tone.” A combination of cold and warm lighting is how you create the perfect complexion on a face, adds Mitchell. “If you can create that in a lovely fitting room with mirrors which are slightly backlit, so you get a contrast to how to the ceiling lighting is and the direct lighting on your skin, that helps.”

According to Gwenael Nicolas, a Tokyo-based architect who has designed stores for Uniqlo and Louis Vuitton, the customer’s body should appear to be floating in a cloud of light. “It’s a mix of indirect light and direct light,” he says. “You have indirect light on the ceiling and indirect light wrapping around the walls. You have a few well-placed spots, that highlight your face and the top of your body.” 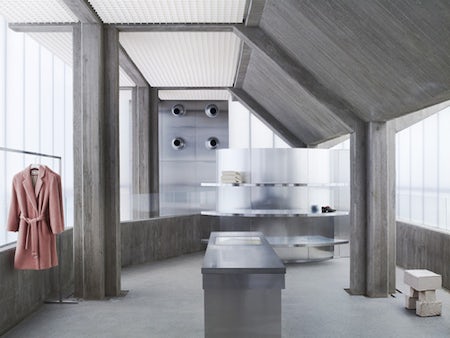 More and more stores are also opening up to natural light. Selfridges, for the first time in its history, opened up the windows on its third-floor womenswear galleries last year. “If you have the opportunity to use natural light, it’s always favourable because it renders the colours in the best way. I wouldn’t use spotlights because it causes a lot of shadows and doesn’t really complement people,” says Pavlina Akritas, an associate at Arup, a design and engineering firm.

“The old-fashioned way was to light only with electric light and perhaps there has been a move towards natural light with big windows,” explains architect Sophie Hicks, whose namesake firm has designed stores for Paul Smith and Acne Studios. “But you have to balance it very carefully with the area around the windows not being a totally different light to the areas deeper in the store, where you are obliged to rely on the electric lights.”

Hicks didn’t use a single spotlight for the Acne Studios store in Seoul. “The lighting is flat natural light from all four sides and natural light from the roof, and the ceiling is covered in fluorescent strip lights that are behind a metal honeycomb grid that refracts the light, so it’s completely even at night.” She tried to add in a couple of spotlights — but found it so jarring that they were immediately removed.