Just two weeks before the United Kingdom is set to break with the European Union, BoF talks to London’s young designers about their hopes, fears and plans.

Just two weeks before the United Kingdom is set to break with the European Union, BoF talks to London’s young designers about their hopes, fears and plans.

LONDON, United Kingdom — “Our studio is making do and getting on,” says designer Richard Quinn from his South London atelier with characteristic British stoicism. His colourful, floral prints and bold designs have marked him as one of Britain’s brightest young creatives. He won the inaugural Queen Elizabeth II Award for British Design in 2018. And, in his print studio, a hub adjunct to his design atelier where he offers up the printers he uses to design his own fabrics to others, he has seen first-hand how its customers — from fashion students to young designers like Mimi Wade to bigger houses like JW Anderson — are coping. “Even though Brexit is quite negative,” he adds, “creativity always happens in these environments.”

But Brexit is a particularly threatening prospect for the £32 billion British fashion industry, best known for the kind of young emerging creative talent that is most likely to be ill-prepared to cope with the tax increases, customs delays and higher supply costs expected after Britain breaks from the European Union. While larger brands like Burberry have been preparing by increasing inventory levels outside of the UK in case of customs delays and supply chain disruptions, smaller brands have neither the working capital nor the warehousing for such measures.

On Thursday, Britain and EU negotiators agreed on the draft text of a Brexit deal, but the UK parliament still has to approve any deal. Already the opposition Labour Party and Northern Ireland’s Democratic Unionist Party have indicated they will not support the agreement, casting doubt on its success ahead of a Saturday vote.

If it’s a hard Brexit, some brands will move, some will collapse.

The British Fashion Council is urging the UK government not to drop out of the European Union without a deal, fearing that damage to the domestic fashion industry from the additional customs tax on fashion exports would reach £900 million. But a no-deal Brexit remains a real possibility and the trade body is advising designers to re-examine their supply chains, review contracts with suppliers and buyers, and prepare for a customs duty on imports and exports of up to 12 percent.

For some young labels, the burden may be too much.

“Without a doubt if it’s a hard Brexit, some brands will move, some will collapse. We know two designers will re-think their career because they have lost buyers. Buyers from four years are citing economic uncertainty,” says Debra Hepburn, co-founder of multi-brand e-tailer Young British Designers, which was among the first to pick-up pieces from the likes of Rejina Pyo, Eudon Choi, Wen Pan and JW Anderson, and is closely watched by established retailers tracking new design talent. “Some designers will go overseas, where they have connections or infrastructure already, and I don’t think so many great new brands will be launching here. It’s devastating.”

One designer who has already left the UK is Paula Knorr, whose signature evening dresses of viscose jersey draped in sequins and metallic fabric are sold in Harvey Nichols and Galeries Lafayette. She set up a studio in Cologne, Germany last year to cut costs, be closer to family and insulate herself from a looming Brexit. The rent on her studio is a quarter of her East London studio and sourcing her fabric and producing her clothes in Germany and Poland means she avoids likely import taxes.

Already at the British Fashion Council’s London showroom during Paris Fashion Week — a pop-up space where young British talents like Marta Jakubowski, Matty Bovan, Ashley Williams and Phoebe English showed alongside Knorr — buyers often asked Knorr where she shipped her orders from. Her ability to dispatch deliveries from within the EU was a palpable relief to many European buyers, Knorr says. 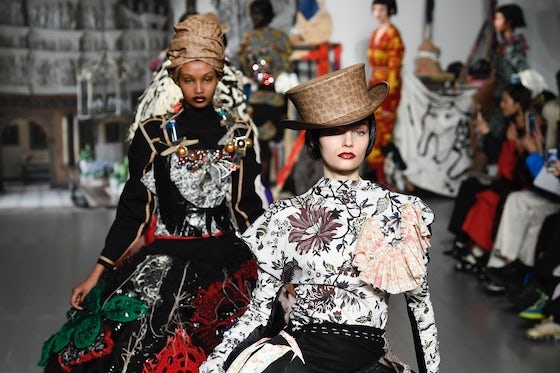 Knorr still flies to London one week a month for creative inspiration, and to meet with her PR, showroom and mentors. “90 percent of my creative friends in London who studied at RCA (Royal College of Art) or Central St Martins are not actually British. They came to London to study and stayed because it’s [an] amazing city for a fashion designer but they are all nervous and they are thinking about leaving,” she says. “Production and fabric are all over the world, so it would be easy to work elsewhere.”

Others are staying put but changing the way they work. Teatum Jones, the luxury womenswear brand by Catherine Teatum and Rob Jones, is expecting to face a 15 percent increase in costs post-Brexit, prompting a "complete rethink" of its fabrications.

"Times are dark but it’s pushed us in a way that's been quite beneficial," says Jones in her south London studio, where a staff member is steadily embroidering a woollen coat by hand. Fabric costs from Italian and French mills have already increased thanks to the precipitous decline of the pound versus the euro since the Brexit referendum in June 2016. While Teatum Jones previously sourced 90 percent of its fabrics in Europe, today half are either deadstock or from its own archives, which they upscale by smocking, flock printing, quilting, patchworking and other hand processes. “It’s really pushed us to be creative, to hold onto our signature of bold, unique fabrics whilst making our margins and still continuing our bold approach,” explains Jones.

Times are dark but it’s pushed us in a way that’s been quite beneficial.

16Arlington is betting its collection of sequinned and feather-trimmed party dresses will provide shoppers with some degree of escape. “With Brexit there is this general mood of doom and gloom across the UK and, combined with the anxiety of climate change, we wanted an opportunity to provide a brief respite, a spirit of nostalgia and fun, especially with this last collection,” says co-founder Marco Capaldo. “We can’t ignore it, but it’s about making the best of a bad situation.” The label is focused on building stronger relationships with their existing suppliers like Selfridges and Lane Crawford as Capaldo fears buyers are less likely to take risks on young British designers with no marketing budgets and higher costs.

“Quite a lot of European wholesalers ask ‘What’s the tax? What’s the duty?’” says Henrietta Rix, co-founder of four-year-old womenswear label Rixo. The brand — which has more than doubled sales in the last year and now has over 140 stockists including Net-a-Porter, Selfridges and Galeries Lafayette — is focusing less on Europe and more on growing the business in Asia, America and online. 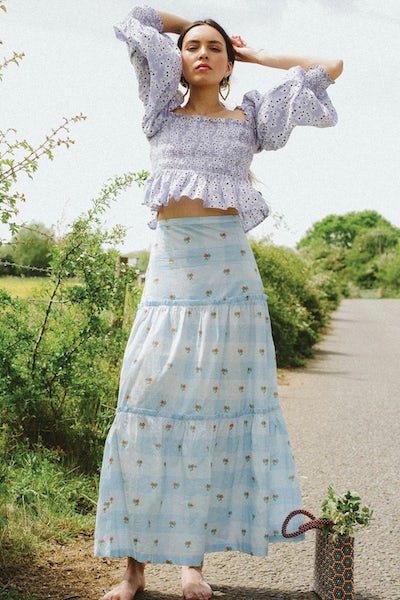 Eudon Choi took a break from London Fashion Week this season to show in New York as part of a push into the US. He still has a Paris showroom but says new taxes could hurt the affordability of his products versus European competitors and doesn’t have an immediate solution. “We cannot just adjust the price, so we have to just carry on regardless and cross the bridge when it comes,” says Choi.

London-based Wen Pan, with high-profile stockists like Selfridges and Opening Ceremony but just three collections to date, says some in her creative community in East London are insulated from Brexit in part due to their production in the UK. Her £250 T-shirt dresses and £900 deconstructed trench-coats, though largely sourced from Italian and Japanese cotton and silk, are produced entirely in London.

But given that so many British designers source their fabrics in Italy and France and manufacture across Europe from Portugal to Poland, Sian Westerman, co-chair of the BFC Fashion Trust and senior luxury advisor at Rothschild & Co, says the industry needs to consider opening a jointly run space in Europe to avoid future customs duties. A warehouse on the outskirts of a major manufacturing city, for example, would allow designers to hold their finished product and send it directly to their European retailers from within the EU, avoiding customs. (Brands could still see the finished samples in the UK as they are excluded from customs excise).

“If you design something here in the UK and get it manufactured in Italy, normally it would come here, and be checked and sent out again — but you’re paying customs both times and that’s a huge risk,” Westerman says. “You’re better [off having] an office in Europe that can do that for you, so it never actually comes back into the UK and [is] closer to the manufacturers in Europe. As an industry, we need to talk about it.”

Editor’s Note: This article was revised on October 21, 2019. An earlier version of this article stated that the co-founder of multi-brand e-tailer Young British Designers is called Debra Whitehouse. This is incorrect. Her name is Debra Hepburn.

Deal or No Deal: What the Latest Brexit Developments Mean for Fashion

Op-Ed | We Need to Talk About Brexit