Looking Back at SXSW Interactive

AUSTIN, United States — Sometimes described as ‘spring break for geeks,’ the annual SXSW Interactive conference is a 5-day whirlwind of panels, presentations, parties, product launches, ‘hackathons’ and happy hours. This year’s conference was said to have attracted more than 25,000 attendees, ranging from tech entrepreneurs to agency executives, to this progressive Texan city with a budding start-up culture of its own, for what, at the best of times, manages to feel like a collective conversation on the future.

But as always, much of the action happened off-piste at countless parties and happy hours that came to life after the rain that dampened the first few days of the event gave way to a burst of warm Texas sun, and people came out from under their umbrellas and bumped into each other in a uniquely SXSW way. Here, we’ve compiled some key takeaways from our five days in Austin.

THE RISE OF THE CONNECTED FAN 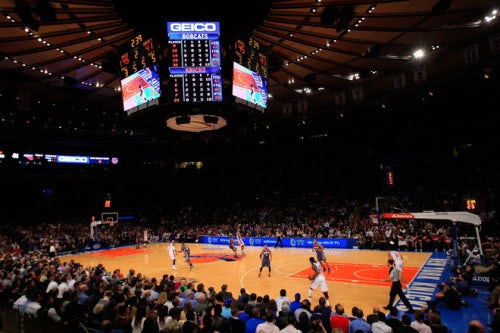 As digital media reshapes the fashion industry, runway shows have become something of a spectator sport for the hundreds of thousands of people who now follow the play-by-play online. As it turns out, there is a lot that fashion can learn from the world of sports and the rise of the digitally connected sports fan.

In a terrific presentation on ‘The Sports Fan in 2015,’ Richard Ting and Kyle Bunch of digital agency R/GA outlined how the internet is breaking down the borders between fans and players, giving rise to a number of trends. The first is the emergence of “crowdsourced coaching” in which fans and coaches make collective decisions, for example which players should start a game. Imagine, for a moment, fashion fans collectively influencing which model was to open a hotly anticipated show. Also on the horizon is the growth of “remote fandom via telepresence,” meaning that fans following a game online, no matter where they are in the world, can make their presence felt inside the physical stadium, influencing, for example, what appears on jumbotron screens. Could this concept be adapted and incorporated into a runway show?

Frictionless sharing via near field communication (NFC), another innovation soon coming to the sports arena, could let fashion editors auto-tweet their arrival at shows just by tapping their phones as they enter a venue, while the explosion of second screen apps that’s set to enrich the sports experience with access to live stats and multiple camera angles could offer these same editors new tools to transmit the excitement of runway shows to fans and followers.

THE UNEVEN IMPACT OF CURATION 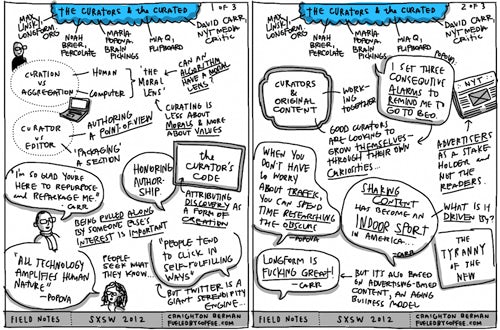 The Curators and the Curated Field Notes | Source: fueledbycoffee.com

“Curation” is a word that seemed to surface again and again at SXSW. Indeed, the rise of social curation platforms like Pinterest, Svpply, The Fancy and the fashion-specific Lyst, where humans, not algorithms, collect and organize content and products that friends and followers can discover, have generated much interest from consumers and brands alike. Pinterest, in particular, has exploded in recent months, and was much discussed at SXSW.

Consumers are drawn to the high signal-to-noise ratio of these experiences, while brands and retailers are seeing these platforms drive significant volumes of traffic to their e-commerce sites. On a panel called “Fashion and the New Taste Graph,” Rachel Tipograph, global director of digital and social media for Gap, revealed that the company was also leveraging its presence on social curation sites to collect product engagement data to better inform merchandising strategies.

But for publishers, media companies and other creators of original content, curation can be controversial. Indeed, the role of curation in the wider content ecosystem was the subject of what was one of the most lively and substantial panel discussions we attended at this year’s conference: “The Curators and the Curated,” featuring New York Times media critic David Carr, Brain Pickings founder Maria Popova, Longform co-founder Max Linsky, Flipboard curator Mia Quagliarello and Percolate founder Noah Brier.

Maria Popova likened the act of curation to a form of authorship or editorship, while David Carr rightfully invoked the unpleasant reality of traffic-seeking “aggregation” sites, which might masquerade as curators, but often reproduce content without proper attribution, stealing audience and undermining the advertising-based business models of publishers.

During the 5-day conference, two initiatives were launched to address the problem of unattributed aggregation. “Discovery of information is a form of intellectual labour,” said Popova, who described herself as a “curator of interestingness” and announced the creation of Curator’s Code, a code of conduct and associated set of symbols that indicate how a piece of content was discovered.

For his part, AdAge editor-at-large Simon Dumenco also used the SXSW stage to announced the creation of the Council on Ethical Blogging and Aggregation, a group dedicated to creating standards around linking, summarising and aggregating content online. Dumenco’s council already has the support of Esquire, The Atlantic and New York magazine. But whether either of these initiatives will achieve widespread adoption remains to be seen.

‘HIGHLIGHT’ OF THE YEAR?

SXSW’s concentration of tech-savvy early adopters makes it a powerful place to launch new apps. Twitter made a big debut at SXSW in 2007, followed by Foursquare in 2010. In 2011, group messaging apps GroupMe and Beluga made a splash and were later acquired by Skype and Facebook, respectively. This year, it was a new crop of passive location-sharing apps like Highlight and Glancee that earned the most attention. Unlike Facebook and Foursquare, which are great for connecting with people you already know, these apps help you make new connections with the people around you, based on interests, common friends and other profile information, like photos.

Even before the conference opened, many predicted that Highlight, in particular, would emerge as this year’s big winner. And indeed, according to Mashable’s mRank leaderboard, which analyses conversations across social media, Highlight was the most buzzed about start-up at the event. But many of the people we spoke with weren’t all that taken with the app, citing battery drain and questioning its overall usefulness.

Others debated whether a Twitter-like success story was still possible at today’s SXSW and if gaining early traction with a tech-savvy crowd was even a reliable indicator that a broader, more mainstream audience would embrace a new app. Indeed, Pinterest targeted middle America before many so-called early adopters took notice. “The early people were from the area where I grew up, in Des Moines, and the site grew very organically from there,” Pinterest founder and chief executive Ben Silbermann told The New York Times.

THE REAL WINNERS: AMEX AND NIKE

It was neither young start-ups nor technology giants — who erected branded spaces like Google Village and Microsoft’s Bing Lot — but Nike and American Express who were the biggest winners at this year’s conference. Both brands delivered well-executed consumer experiences that struck a chord with attendees and generated an explosion of positive buzz on social media.

Demonstrating the company’s brand promise, “Membership has its privileges,” American Express gave cardholders who synced their cards to their Twitter accounts a chance to attend a Jay-Z concert at Austin’s W hotel. BoF was there to witness the action and can report that the experience was immaculately staged; a big step forward compared to Amex’s much quieter Foursquare partnership last year.

Nike made its first official appearance at SXSW this year. The brand erected basketball courts, skateboard parks, motion-responsive billboards, an Apple-like pop-up store that morphed into a nighttime concert venue and a skyscraper-scale app that measured and projected the collective energy level of dancing concert-goers, in realtime, onto the Frost Bank Building in downtown Austin — all to promote the launch of Nike’s new activity-tracking FuelBand.

There were a number of talks and panels on the official programme on why big brands and their agencies should start thinking and acting like lean and agile start-ups, but perhaps it’s also worth noting that start-ups could learn a thing or two from big brands as well.

NOW EVERYTHING IS INFORMATION TECHNOLOGY, INCLUDING US 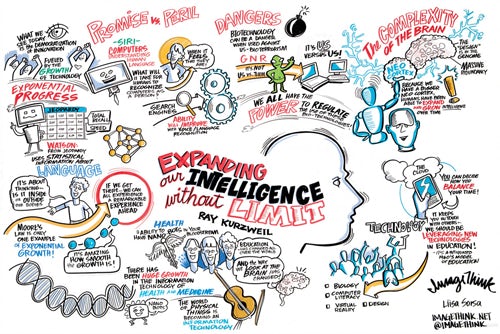 “Software is eating the world,” wrote Marc Andreessen in a seminal essay published last summer in theWall Street Journal. “We are in the middle of a dramatic and broad technological and economic shift in which software companies are poised to take over large swathes of the economy,” he continued. “More and more major businesses and industries are being run on software and delivered as online services.” Amazon is a prime example, as are Netflix, iTunes and Spotify. With its sharp focus on digital experiences and sophisticated back-end operations, Burberry is also on its way to becoming a technology company, as much as a fashion company.

In a fast-approaching future, however, the power of software may not only reshape the way businesses make, market and sell products, but fundamentally transform the physical world we inhabit and human life itself. “The world of physical things is becoming an information technology,” said SXSW keynote speaker Ray Kurzweil to a stadium-sized hall in the Austin Convention Center, alluding to the rise of technologies like Google’s self-driving cars. “Health is becoming an information technology,” he continued, predicting that the convergence of genetics, nanotechnology and robotics (GNR) would revolutionise human biology.

In the coming years, microscopic “nano-bots” could flow through our blood streams, regulating and enhancing our health, and perhaps dramatically extending the human lifespan, said Kurzweil. We are already cyborgs who routinely enhance and outsource brain functions using devices like the iPhone, he argued, explaining that exponential growth in technology would fuel the birth of intelligent machines with which humans would ultimately merge, becoming information technology ourselves.

Vikram Alexei Kansara is managing editor of The Business of Fashion