No longer characterised by 9-inch board shorts and graphics targeting teenagers, the men's swimwear market is growing and giving rise to a wave of brands with broader lifestyle propositions.

LONDON, United Kingdom — The size of the global swimwear market is expected to reach $19.3 billion by 2018, propelled in no small part by male consumers and the growth of swimwear brands catering to them.

“When Mr Porter first launched, there were only two or three swimwear brands. If you look now, there [are] maybe ten brands. It is definitely a growing market," said Max Leese, co-founder and chief executive of Frescobol Carioca, a British lifestyle brand inspired by Brazilian beach culture. "When we started the brand in about 2009, it was really just Vilebrequin, and Orlebar Brown was coming to the fore. Now we have just finished our busy season doing all the trade shows and it has been really interesting to see just how many brands there are on the market,” Leese continued.

“When we started back in 2011, there was this boy's market. Obviously there are more and more players coming in, but there is still room for growth. And there is still so much more market share to take. I see the evolution of what is happening with swimwear kind of where denim was 15 years ago,” added Alex Faherty, chief executive of Faherty, a swimwear brand he co-founded with his twin brother Mike.

As men's swimwear has grown, the category has given rise to new transitional shorts, suitable for wearing both in the water and at the dinner table, which have attracted new consumer demographics and, in turn, new entrants to what had, for a long time, remained a relatively static marketplace largely dominated by lumbering surfwear leviathans with products targeting teenagers and lacking in aesthetic sophistication.

Launched in 2008, Orlebar Brown revolutionised the market with its modern, tailored swimwear, which is now stocked at over 250 doors worldwide, including Selfridges, Harrods, Mr Porter, Bergdorf Goodman and Barneys New York, not to mention the company's fast-growing directly operated retail network. Notably, Orlebar Brown’s rise was not rooted in the allegiance of a youth demographic; rather its success was linked to the company's ability to identify, target and market to the kind of affluent professionals who are comfortable spending over $200 for a pair of swimming trunks. Crucially, the company also managed to carry those consumers over into new product categories, launching a broader lifestyle proposition in the process. Indeed, over 50 percent of Orlebar Brown's product offering is outside swimming trunks.

A new wave of swimwear labels are following in the wake of Orlebar Brown, tapping the same demographic of affluent professionals and hoping their swim-and beach-focused lines will act as beachheads from which they will be able to build broader lifestyle brands.

“We started the brand with beach bats,” said Leese of Frescobol Carioca, who founded the company which generated over £1 million (approximately $1.7 million) in revenue this past year, according to figures supplied by the company, with his friend Harry Brantly. “We called the beach bat our ‘door buster,’ to get into the top stores around the world and really set the scene before we launched the clothing around six months after. The plan was always to do a swimwear brand, but we really wanted to set the scene with the beach bat. There were no other brands that were capitalising on Brazilian heritage and had that lifestyle element.” 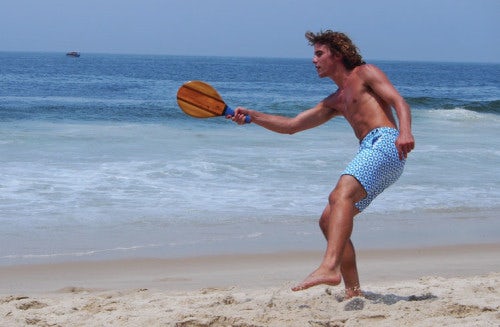 Rooted in the beach lifestyle of Rio de Janeiro, Frescobol Carioca takes its inspiration from Frescobol, a popular beach sport played up and down the beaches of the Brazilian metropolis. “Obviously all the guys in our market are using the best fabrics, the best tailoring. We have, in Italy, an exclusive fabric made especially for us, but I think the main differentiator in terms of style is that rather than having a designer sitting behind two screens in London coming up with prints, we have taken our prints from the sidewalks of Brazil,” said Leese.“Rather than just paying a designer in London to come up with some prints for us, we wanted something that was more authentically Brazilian. We wanted to do something where we really had the authority to be able to say this print comes from Brazil.”

Having successfully launched the label and opened two stores in London, Leese intends to expand the brand's focus into a broader lifestyle proposition and the company recently raised funding from investors including fashion photographer Mario Testino.

“There are two things that are on our plan at the moment. One is to start looking quite deeply into activewear. Certainly along the beaches of Rio there are a lot of people doing early morning fitness and little outdoor gyms that exist every few hundred metres along the beach, so that is an area that is going to be interesting for us to explore. The other area which we can do with authority, because it is Brazil, is womenswear.” 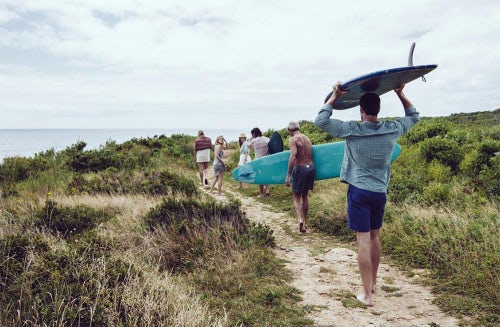 “We knew that the lifestyle collection would come after the swimwear and from the start what we wanted to do was [bring] an eco-friendly aspect,” said Faherty on his company's plans. “There was really no one going at it with that kind of ethos, which was important to us. The idea was: we want sell great clothes. But we also thought about bringing some sustainability to it, which, in the contemporary market, just didn’t really exist,” he continued.

Stocked at over 100 doors, including Barneys New York, Nordstrom and a directly operated boutique, the brand’s swimwear sells at $125 for solid colours and $138 for prints and is made entirely from recycled polyester sourced from plastic bottles. “Mike and I were very certain that we wanted to launch with one great product: a great board short. We wanted it to be technical but use great fabric with great prints that were not graphic and young but had some sophistication." According to figures supplied by the company, Faherty is on track to generate $3 million in revenue in its second year. And, as intended from the start, Faherty has quickly expanded into casualwear and activewear, all of which is ethically and sustainably sourced.

As to the viability of these swimwear-based brands as lifestyle propositions, the early results are promising. “Our global sales [of these brands] have increased 30 percent year-on-year,” said Sam Kershaw, a buyer at Mr Porter. “Vilebrequin, Orlebar Brown and Frescobol Carioca have all performed very well.”