In Milan, Anything Goes for Miuccia's Children

In a revitalised Milan Fashion Week, rising names — from Gucci's Alessandro Michele to Marco de Vincenzo — are all the children of Miuccia Prada; working with references, aesthetic and a postmodern pastiche.

In Milan, Anything Goes for Miuccia's Children

In a revitalised Milan Fashion Week, rising names — from Gucci's Alessandro Michele to Marco de Vincenzo — are all the children of Miuccia Prada; working with references, aesthetic and a postmodern pastiche.

MILAN, Italy — The revitalising effect of Alessandro Michele's arrival at the creative helm of Gucci was strongly felt at Milan Fashion Week, which closed yesterday — and not just because a certain kind of bohemia, mined from granny's attic, seemed to again become fashion's most tempting trend. It was not even the ongoing glorification of the weirdo and the beautiful loser; even though the casting of peculiar-looking models has become mainstream and made the runways a lot more diverse than they used to be (the striking abundance of black models on the Milanese catwalks was another uplifting sign of a newfound openness which hopefully will last). Alessandro Michele, quite simply, restored hope in the possibility of generational turnover in the bel paese. In a country so averse to change that it sometimes destroys prospects for its younger generations, he opened a door.

Michele was a wonderful nobody, toiling in the trenches of a crowded design studio until Gucci CEO Marco Bizzarri put him in the driver's seat, barely nine months ago. But all of a sudden, the move has had a contagious, positive impact on the design game of Italy’s up-and-coming creatives and established names alike. All parties respond to competition. And, in Milan this season, new competition forced everybody to give his or her best, making it clear that the city is back with a vengeance. 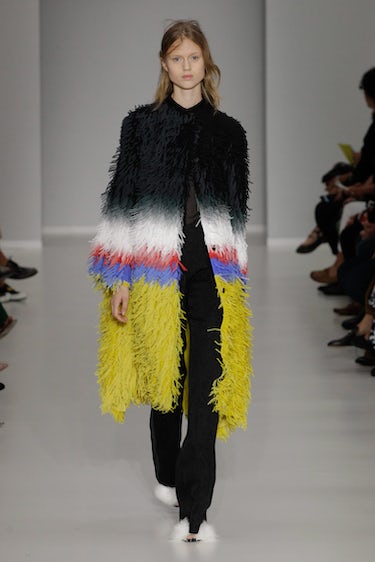 Donatella Versace, for instance, delivered a punch of a collection that had sass and glam and a bevy of powerful energy. Sure, it was mainly due to the keen choice of a new venue for the show (a huge domed space called the Citylife Palace) and a striking mise en scene, yet it was also clear that, at Versace, the fashion is moving in the right direction again. Even Miuccia Prada, who seemed to have lost her edge of late, rose once more like the Phoenix she is, showing off her unique ability to twist and turn bourgeois codes, making them subversive and progressive. With an intensely wrought-out, hedonistic, crazily geometric and — well — very heavy-looking collection, Mrs Prada commandingly reaffirmed her centrality as the moving design force in Italy and beyond: an originator and a true influencer who everybody (even the detractors) looks up to.

Because at closer inspection, the new names building up the bright future of the Italian fashion system are, at least in terms of method, all Miuccia's children, in the sense that they mainly work with references, aesthetic heritage and a postmodern pastiche. Miuccia Prada is the queen of fashion postproduction. So are her offspring. Isn't Alessandro Michele's vintage-hued zest for uneven associations, his stress on off-kilter ladylike with a weirdo zing, something that owes a lot to Prada's twisted sense of ugly chic? Isn't Marco de Vincenzo's proclivity for surface tension and offbeat decoration an accelerated, psychedelic take on some of Miuccia's oddest moments? Isn't Arthur Arbesser's taste for the askew mix of the proper and the perverse something reminiscent of Prada's dryly intellectual approach? This is not to say that these designers are copycats: they simply chose their role model and thank god they chose well.

Isn't Alessandro Michele's vintage-hued zest for uneven associations, his stress on off-kilter ladylike with a weirdo zing, something that owes a lot to Prada's twisted sense of ugly chic? 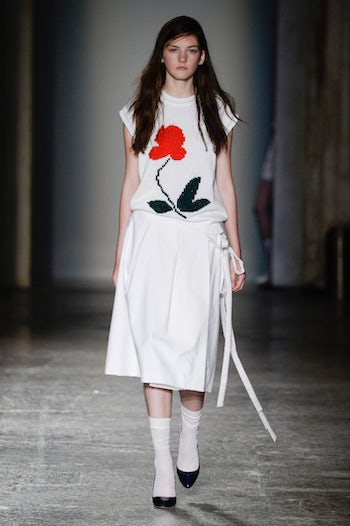 This said, not every show was a standout and echoes of other designers kept surfacing here and there. The age of appropriation is a global phenomenon, so much so that sometimes it is hard to tell who is copying who and what actually came first. Etro's bohemian ballerina rhapsody had whiffs of Gucci’s languor, but then Etro was romantic long before Gucci made the turn from sleek to eccentric. There were whiffs of Céline at MSGM, although interpreted with a joyous, contagious energy. And Issey Miyake's pleats made a comeback everywhere, in the most literal ways, from Pucci to Gabriele Colangelo and beyond. The ghost of Helmut Lang, on the other hand, still resonates: just ask Alessandro Dell'Acqua and, again, Pucci. Sometimes it feels like designers are so intensely looking for a signature, a way to become memorable and make a mark in the imagination of consumers that they look at each other a bit too much, diluting their individual peculiarities. Isn't identity something that should be built singularly? However, even if confusing and a tad repetitive, the focus on clothing, rather than the glitzy celebrities who sit at the sides of the catwalks, paid off. Milan's keen interest in clothes that sell has not changed at all. But this is no bad news. After all, experimentation is not high on today’s fashion agenda, and this is probably more of a broad historical phase than a phenomenon specific to any one locale. That said, Milan has never been a place of crazy heads.

So, what did Milan actually herald, fashion-wise? The death of the trend, to be brutal. The dawn of the concept, if ever concepts were needed in Italian fashion. There was a lot to process and digest, but sometimes without real sense. Designers as diverse as Dolce & Gabbana, Giorgio Armani with his Emporio, and Peter Dundas, whose debut as creative director at Roberto Cavalli left one craving some real sensuality, threw the most different inspirations on the catwalks, making for line-ups with more lumps and bumps than a country road.

Today, the catwalk looks as puzzling and confusing as the sidewalks of any metropolis. 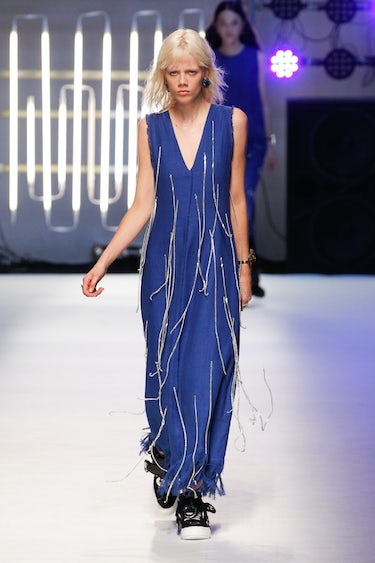 It all started a while back on Hedi Slimane's street-infected catwalks and has a lot to to with the way fashion is putting product, not ideas, at the centre of the proceedings. Today, the catwalk looks as puzzling and confusing as the sidewalks of any metropolis. Designers want to dress real people —plenty of them — and to do so they are adopting the haphazard aesthetic of the street, its chaos and confusion, and raising it to the level of the catwalk. Sometimes it works very well: Giamba's insouciant wink at sleazy hedonism and butchy glamour, for instance, was infectious and credible. Otherwise, there was a lot of chaos on the runways of Milan: shows got longer and longer and one outfit did not always make any sense next to the other. Show notes and designer quotes covered this up as a way to highlight and stress individuality, but it looked a bit more like a way to show collections that are increasingly designed as a cohort of products, with no real plan behind them except producing stuff for the widest possible audience.

But there was more. In its glorification of street-savvy pastiche, designers often left the big question — creating a visual language rooted in the now — unanswered. Most designers are still looking at the past, whether that is the 1990s or the bygone heritage of a glorious brand, in order to build the present. Only a few of them, notably Consuelo Castiglioni at Marni, dared to propose something more abstract and progressive. In this sense, Italy remains a country averse to the new.