The Duchess of Sussex’s influencer past and a shift in stance from Kensington Palace has emboldened brands to better capitalise on the moment when the royal wears their wares. 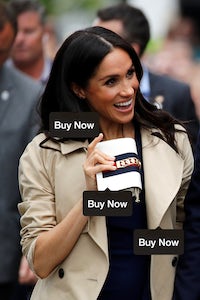 The Duchess of Sussex’s influencer past and a shift in stance from Kensington Palace has emboldened brands to better capitalise on the moment when the royal wears their wares.

SAN FRANCISCO, United States — Once upon a time, when a member of the British royal family stepped out, it used to mean sleuthing time for fashion sites, digging deep to suss out the style specifics of their ensemble. Now, brands blast their looks down a range of marketing channels in hopes of creating their very own fairy-tale, complete with plenty of dollar signs.

Consider the Duchess of Sussex’s recent tour of Australia, New Zealand, Fiji, and Tonga, during which the royal also known as Meghan Markle wore more than 30 looks. The labels she chose — from Veja to Club Monaco — scrambled to make the most of their brief turn on the royal stage, flooding social media with shoppable images and sponsored posts.

Canadian jeweller Maison Birks put together a highlight reel compilation of the Duchess in its baubles on Instagram Stories, with “swipe up” links to shop. Birdies, the US slipper start-up, repurposed a palace picture from the tour at the top of a blog post devoted to the duchess. Don O'Neill, creative director of formalwear line Theia, released a written statement following the Duchess’ appearance in one of his gowns, detailing the request and how it foreshadowed her now-public pregnancy.

This publicity push represents “a seismic shift” in the royal fashion landscape, said Susan E Kelley, the creator of the well-respected sites What Kate Wore and What Kate’s Kids Wore, and the co-editor of What Meghan Wore. It may be commonplace in Hollywood, but Britain’s Queen Elizabeth II and her descendants have long-prized discretion in the fashion arena. Sure, there was the rare occasion when a brand made a fuss. But the direct link between an appearance and a siren call for sales? “You just didn’t see it,” Kelley said. 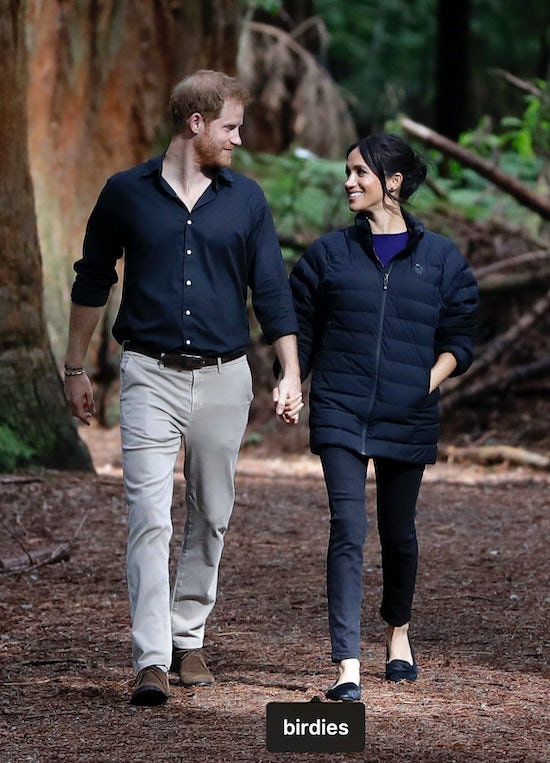 Now, along with public social media mentions, there are press releases detailing the styles. Royal fashion sites have become a kind of discreet back channel, too, used by companies to publicise their products. “We have several brands that have sent us full lists of everything they have shipped to Kensington Palace,” said Amanda Dishaw, editorial director of Meghan’s Mirror. Some include scans of invoices as further proof, which is helpful given that her clean, minimalist aesthetic makes many of the clothes not-so easy to identify. It allows Dishaw and her team to credit even the most basic of garments, like a white T-shirt.

Given the British royal family’s outsize influence, a brand stands to gain significantly from a royal moment. Royal Warrants, a seal of approval awarded to products by the Queen, Prince Philip and Prince Charles, lifted recognised British brands by as much £193 million ($219 million) in 2017, according to business valuation consultancy Brand Finance. A third of the US population considers the United Kingdom to be a “world leader in fashion” thanks to Kate and Meghan, according to a report released this fall from the same consultancy.

When Catherine, the Duchess of Cambridge (née Kate Middleton) married into the royal family back in 2011, Instagram was just getting started and tools including shoppable tags and “swipe up” links didn’t exist. Sites still documented her every style move, but it took some legwork, tracking down and confirming brands.

Meghan’s entrance on the scene appears to have changed that, led by Kensington Palace, no less. Kelley points to the roll out of Meghan and Prince Harry’s wedding in May 2018 as the beginning of the new approach. The royal’s own team was quite vocal about the vendors it used, including the florist and the cake baker. Even the makeup artist and hair stylists were named in the official releases. “It fed into a little of the commercialisation, if you will,” Kelley said. (In an email, Kensington Palace declined to comment.)

It may be commonplace in Hollywood, but the Queen and her descendants have long-prized discretion in the fashion arena.

Meghan’s pre-royal life, as an American actress and influencer, is a contributing factor here, too. For years she worked with brands on product placements and understands well the publicity quid-pro-quo that is commonplace in fashion. Birdies, the San Francisco-based slipper start-up, sent Meghan a pair of its original black velvet Blackbird slippers while she was still working as an actress. She posted pictures on her personal Instagram account wearing the brand several times before she became a royal. Then, to the delight of Birdies, she wore them again on the final engagement on the last day of her recent tour.

“We took the day to celebrate,” said co-founder Bianca Gates. It took a few more days, too, pushing out sponsored posts with links to its website, briefly featuring Meghan on its homepage and then compiling the various times Meghan has worn its shoes in a blog post. It also sent out an email blast to shoppers. “We wanted to share that excitement with our customers,” Gates said. The brand sold out of the updated, but similar Starling style in black that day, and reported strong sales of other styles, too.

Others have shown more restraint. UK-based Marks & Spencer declined to comment after Meghan wore its dress in November, with a spokesperson saying the team “takes the approach of not proactively promoting royals wearing their brand.” But most brands seem unable to resist a mention: L.K. Bennett recently posted a picture of Kate on Instagram, specifying in the caption that the duchess wore its “Mortimer” dress and “Dora” clutch. Givenchy shared three pics of Meghan on stage celebrating its designer, Clare Waight Keller, at the British Fashion Awards.

Still, the smaller and more accessibly priced brands tend to be the most vocal. On the day that Markle wore a pair of Rothy’s flats, “it felt like everybody tossed papers in the air, and started running around,” said Elie Donahue, vice president of marketing for the San Francisco-based sustainable shoe brand.

THE SURPRISE: Her Royal Highness The Duchess of Sussex wore a custom made #Givenchy outfit to surprise @ClareWaightKeller by presenting her with the British Designer of the Year Womenswear award at the 2018 BFC #FashionAwards. #MeghanMarkle #GivenchyFamily

Rothy’s shared a single picture on its Instagram feed and received almost 20,000 likes — nearly 20 times more than usual. Rothy’s posted a press quote praising Meghan and the shoe (one remains on its homepage) and placed sponsored posts on Instagram and Facebook. Sales of the style, the brand’s best seller, rose three times that week, while the black round-toe flat doubled, according to Kerry Cooper, president and chief operating officer. All that without ever adding a shoppable link. “You have to be really careful,” Cooper said.

Indeed, these posts can be troublesome legally. First there is the issue of photo rights. A brand must obtain authorisation or pay proper licensing fees to use another’s copyright protected photo, said Julie Zerbo, an attorney in New York and editor-in-chief of The Fashion Law. Social media is filled with stolen or improperly licensed pictures.

In the US, where Meghan, an American, could have grounds for action if she saw the need, there is also the right of publicity. Specifics vary by state, but generally it gives a person control over use of their identity — their name, voice, signature, even social media handle — for commercial purposes, according to Hannah Taylor, an advertising lawyer with a specialty in social media in the New York office of Frankfurt Kurnit Klein & Selz PC. Taylor points to the 2014 case when actress Katherine Heigl sued American drugstore chain Duane Reade for using a paparazzi picture of her carrying one of its bags on Twitter. The suit was settled for an undisclosed amount but initially claimed $6 million in damages; celebrities often claim the amount they argue they would get in a paid endorsement deal.

With the royals, social media approaches are varied: some brands mention the style name in a caption, others add a shopping tag to a product shot, while still others brazenly add the tag directly on the picture of the royal. It’s all in the same spirit, according to Taylor. She advises clients to think about the likely increased legal risk with such a post. The brand has already won, she contends, by having a member of the royal family wear a piece. Such a placement often receives worldwide press coverage, and a picture from the appearance is many times shared on the Kensington Palace Instagram account, which has roughly seven million followers.

The idea that [a brand] would then need to repost it to their 20,000 followers seems not only dangerous but also unnecessary.

“The idea that [a brand] would then need to repost it to their 20,000 followers seems not only dangerous but also unnecessary,” Taylor said.

UK laws are somewhat weaker, offering protection only if the mention could be mistaken for an endorsement, said Brinsley Dresden, partner and head of the advertising and marketing law group at London’s Lewis Silkin LLP. Since the royal family never does product endorsements (the way a movie star or musician might) it would be tough to prove a mention of them appeared to be one, Dresden added. Most pictures of the royals wearing something are either press photographs or paparazzi snaps, neither of which would be mistaken for a posed marketing shot.

The UK code of advertising practice offers some guidelines: “Members of the royal family should not normally be shown or mentioned in a marketing communication without their prior permission,” it reads. But the royal family isn’t keen to sue people, Dresden said. They may issue requests but “they stop short of actually issuing legal proceedings.”

Even so, with today’s savvy consumers, it would seem the most effective type of publicity is not an email blast or a shopping link. A brand should use the royal spotlight to share its story, and its positioning, with unfamiliar shoppers. Take Outland Denim, an Australian line that employs and trains exploited women. It put out a press release announcing it would be hiring between 15 and 30 new seamstresses as a result of Meghan wearing their product. Pippa Small Jewellery used Instagram to showcase a picture of Meghan in its gold bangles and earrings, explaining in the caption that they were made by artisans in Afghanistan.

The sales impact of a Duchess moment goes beyond any the single product, especially if it sells out quickly, said Dishaw of Meghan’s Mirror. Shoppers are often willing to poke around a brand, and buy something else if they like what they see or hear — and that can lift sales company wide. “Take advantage of the moment to showcase the bigger picture,” Dishaw said.