Céline has become one of the most copied fashion brands on the planet and every critic’s favourite. What’s more, it has sales revenue to support the hype. How long can it can last?

Céline has become one of the most copied fashion brands on the planet and every critic’s favourite. What’s more, it has sales revenue to support the hype. How long can it can last?

PARIS, France — A flip through any of the fashion glossies currently on the newsstand can induce an uncanny sense of déjà vu. Practically every other advertisement for a luxury brand — from Lanvin to Valentino to Fendi — prominently features a somewhat boxy leather bag that widens towards the top to form a vaguely trapezoidal, ‘winged’ shape. This is no coincidence, but rather evidence of the unmistakable influence of one woman: Phoebe Philo, the creative director of the house of Céline, who pioneered the shape. 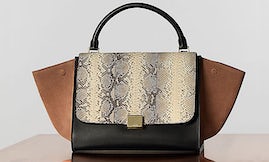 It’s no secret that Céline, acquired by luxury conglomerate LVMH in 1996, has been hugely influential, and a favourite of critics, since Phoebe Philo took the creative reins in 2008. In a recent profile for American Vogue, Hamish Bowles said Philo had “reinvented the way women dress and transformed a mere house into a fashion cult.” But Philo’s Céline has been a commercial success story as well. While LVMH doesn’t break out performance figures for individual brands, on an earnings call in January, the group’s chairman and CEO, Bernard Arnault, made special mention of Céline, saying that the brand had produced "exceptional results." Indeed, according to market sources, Céline’s revenues are said to have doubled in the last three years, surpassing €400 million for 2012, Milano Finanza Fashion reported in early February. 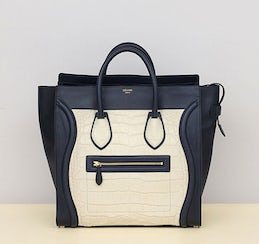 It’s an impressive achievement and one that’s been driven largely by the label’s formidable leather goods business. Beginning with her first collection for the house, Philo introduced three foundational bag lines — the ‘Cabas’, ‘Luggage’ and “Classic’ — with pared-down, logo-free designs, distinguished by their easily identifiable shapes. Last year, speaking to WWD, Céline’s chief executive, Marco Gobetti, called them the "pillars" of the business. Each season, the label releases new iterations of these models, sometimes customised for specific regions or retailers. On top of this foundation, Philo has also gradually added new shapes, such as this season's 'Edge.'

Following the opening of Céline’s first US store, a major flagship on New York’s Madison Avenue, the brand plans to finally unveil a full-fledged, Peter Marino-designed flagship in Paris later this year, while stores in Hong Kong and Los Angeles are said to be in the works. But such is the power of Philo’s bag designs that, even at the raw-feeling, temporary Paris store the brand has operated on rue François 1er since 2010, product consistently sells out. And all this, despite a questionable decision to completely eschew e-commerce.

Retailers, too, continue their unabashed love affair with Céline. When New York department store Bergdorf Goodman announced its ambitious makeover plans last week, the retailer said it planned to anchor the revamped accessories area on the ground-floor of its iconic Fifth Avenue store around two brands — Chanel and Céline — placing Philo’s house alongside what may be the foremost luxury fashion label in the world.

"[Céline] is the perfect storm of a truly original fresh voice, absolute perfection of quality, utter standards, disciplined brand stewardship and good timing,” Linda Fargo, senior vice president and fashion director of Bergdorf Goodman, told BoF. “Céline operates on all these cylinders all at once. And if imitation is any gauge of success, then clearly Phoebe Philo's Céline is universally recognized as the pinnacle ‘It’ brand.”

"I felt it was necessary to establish quality to the brand,” Philo told The Wall Street Journal back in 2010.“Now that we are establishing that and the top of the pyramid is in place, we can open it out."

Indeed, building on Céline’s current momentum, Pierre-Yves Roussel, president of LVMH's fashion division, aims to double the brand’s revenues in the next three to five years, according to Milano Finanza Fashion. But as Céline continues to grow, will the brand be able to maintain the elite positioning it has worked so hard to attain, while increasing revenues at the scale LVMH envisions?

Fargo, for one, isn't worried: “Dare I say it, they may well become the modern-day equivalent of the standard bearer of non-perishable luxury: Hermès.”