The new iteration of the TV series takes a head-on approach to issues like LGBTQ rights and Black Lives Matter, all while selling millions of dollars in product, from makeup sticks to subscription boxes. BoF spoke with 'Fab Five' member Tan France and series creator David Collins about what makes the show so successful.

The new iteration of the TV series takes a head-on approach to issues like LGBTQ rights and Black Lives Matter, all while selling millions of dollars in product, from makeup sticks to subscription boxes. BoF spoke with 'Fab Five' member Tan France and series creator David Collins about what makes the show so successful.

LONDON, United Kingdom — When Jonathan Van Ness, one of the cast in Netflix’s Queer Eye, recommended a green concealer stick for combatting redness to Tom Jackson, one of the “heroes,” Twitter was flooded with questions about which brand Van Ness used. After it was revealed in an interview that he applied Cover FX’s “Correct Click” stick, it sold out within hours.

It’s not an unusual story for the hit Netflix reboot of “Queer Eye for the Straight Guy,” which originally aired on Bravo in 2003. Each episode of both iterations of the show features a team of gay “experts” in the fields of fashion, grooming, interior design, food and culture, collectively known as the "Fab Five," performing a makeover, usually on a heterosexual man. The original was one of the first reality shows to feature an all-gay cast.

The new version, which premiered in 2018, not only features a more diverse cast — Karamo Brown, the culture expert, is black, while Tan France is a British-Pakistani Muslim — but also allows viewers to get to know the Fab Five on a more personal level, from their husbands to their religious beliefs to their past.

I’m never like ‘I want [the hero] to look like a supermodel so I’ll take them to Gucci.’ That’s not sustainable.

“The original Fab Five were thought of as superheroes… they were behind the mask and cloak,” creator David Collins told BoF. “We didn’t know who they were. The reason this new format works so well, and people are connecting, is we get to really know the Fab Five. We know Bobby [Berk] is married to a doctor and Karamo [Brown] is a father.”

The personal connection and honesty has paid off —the Fab Five between them rack up over 14.5 million followers on Instagram and have won three Emmy awards. While Netflix doesn't release viewing figures, the show was renewed for its fourth season since 2018, which begins streaming on July 19, and France was cast as a judge for the network's fashion design competition challenge.

Product placement is a fixture in both iterations, though there too, the tactics have changed with the times. In the original, the cast would frequently drop brand names, dressing their heroes in head-to-toe Gucci or Levi’s and promoting their books or personal projects.

Forever crying over all these wonderful people celebrating LOVE at #worldpride together 💓😭🌈 [📸: @sorayatzaman]

In the reboot, products on display vary from the GMC pick-up truck the Fab Five drive to meet their next makeover target to retailers and brands such as Target and Bonobos. While logos do appear on the show, brand dropping is rarer, and, as with Van Ness’ concealer, viewers are often left to discover a product’s name and manufacturer themselves.

Tan France, the show’s fashion expert, said he’s mentioned a brand by name only once — he called out Target, in season one.

“A common misperception is we get paid to take heroes to certain places,” he said. “I base it on what’s there and appropriate for the hero. I’m never like ‘I want them to look like a supermodel so I’ll take them to Gucci.’ That’s not sustainable and a lifestyle they can maintain.”

Two weeks prior to meeting their subject, the group receives a dossier with basic information, such as age, job, hobbies and favourite stores, France then puts together a selection of outfits, typically pulled from stores close to where the target lives (the first two seasons were filmed near Atlanta, the second two in Kansas City, Mo.). 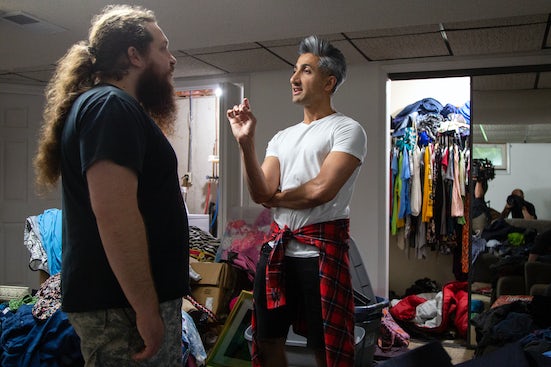 Queer Eye's Tan France with one of the show's heroes | Source: Netflix

If France finds a store that works for the character, the producers will reach out and find ways of monetising it. In the second season, one of the characters wanted to go camping with his son, so France took him to outdoor gear supplier REI. Other times, the endorsements are completely organic — the green stick Van Ness recommended was a product he loved from his career as a hairstylist and wasn’t paid for by the brand.

“The show used to be much more brand-specific, but we’re not taking every hero to Tom Ford,” said Collins. “It’s about understanding that in towns like this across America, these are the types of stores — whether it’s Walmart, Target or Bonobos — that are accessible to the every-day person.”

After receiving criticism for inauthentic product placement during the first iteration, producers were careful.

“We all joke the original series maybe had a little too much placement,” said Joel Chiodi, a senior strategic development executive at Scout Productions, the production company owned by David Collins.

The reboot also has the luxury of streaming on Netflix, which is free from the pressure to draw in advertisers and other revenue at Bravo, its former network.

“Netflix is so much more subtle because it can afford to make a show without product placement at all,” said Katherine Sender, a professor of communication at Cornell University. “Because it’s subscriber-based… they don’t need to promise obvious publicity.”

That said, producers have turned away many brands. “Some brands are very old-school and say ‘you need to say these three things about the product’ — it’s very jarring,” Chiodi said.

Caressa Douglas, the SVP of global strategic partnerships at Branded Entertainment Network, a product placement company, says the humanising element was why many of the brands in the original series wanted to return. “It was one of the key objectives; fitting authentically into that cultural conversation.” 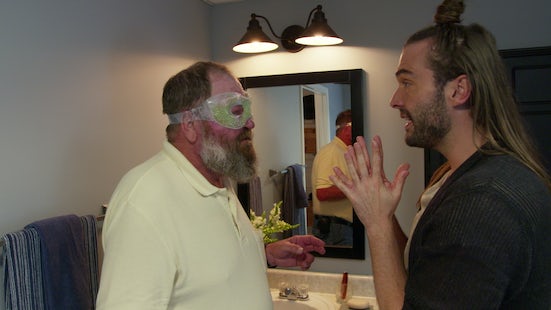 Jonathan Van Ness with one of the show's heroes | Source: Netflix

Key to that appeal is the show’s willingness to touch on social issues. In one memorable exchange, Brown and one of the show’s heroes discussed their personal perspectives on the Black Lives Matter movement, touching on police violence and racism in America.

Addressing controversial topics was, from the start, central to rebooting the show for the millennial generation, who don’t separate social issues from their consumption habits as past generations did.

“A lot has happened since the original incarnation,” Collins said.

France said global political uncertainty is one reason so many viewers flock to the show.

“Our show hits the zeitgeist so perfectly because the world is more divided than ever,” he said. “We offer a moment of connection. It’s the most authentic version of a reality show. Nothing is reshot, nothing is overly produced.”

The men's grooming and style landscape has undergone changes — gender lines are less rigid, and men use more styling products than ever before, while the menswear market is growing at a faster pace than womenswear, with sales expanding by a compound annual growth rate of 2 percent, according to Euromonitor. "The breakout star is Jonathan, and he is doing really interesting things with gender," said Sender. "He has beautiful long hair, a full beard and will wear high heels and long dresses in the show that could be seen as very feminine."

Many viewers have changed their grooming and style habits after watching the show. “I want that person watching at home to think, ‘I can wear that and I know just where to get that,” said France. One user Tweeted “When I get dressed in the morning, I now stop to consider how @tanfrance would critique my colour and style choices. #QueerEye hasn’t even been out for a month and it’s changed my life so much." Another viewer went out and got a new wardrobe with his wife after being inspired by France’s advice.

While the original iteration gave fame to personalities like Carson Kressley and Ted Allen, who remain celebrities today, a key addition to the modern show is Instagram. From the premiere of Season 1 to the release of Season 3, Jonathan Van Ness’s following grew from 890,000 followers to 3.8 million, while France's followers grew from 680,000 to 2.9 million, according to data provided by Hypr.

Queer eye has straight up changed my fathers life like he has come home with bags from the Gap two days in a row now... chino pants here, a little polo there... I’m grateful

The “Fab Five” have become stars of their own, making endorsements on their Instagram accounts and monetising their social media presence. Tan France has mentioned brands like Adidas and Coach, while Antoni Porowski generated marketing dollars with mentions of Calvin Klein and Balmain.

“People know me by two things: my hair and my ‘French’ tuck,” said France, referring to his frequent recommendation to tuck shirts into jeans — just at the front in a drape-like manner, while the back and sides are left loose, making the wearer look slimmer — that went viral on social media. “Nobody ever commented until I actually mentioned it in Season 2. The fact I put a name to it is what changed it.”

He heard someone in production call it the “French Tuck” so he started using it. “I do not call it French tuck because my name is France,” he clarified.

“Then I see Oprah, Oprah, talking about the French tuck on her Instagram stories,” said France. “It blew my mind.”