Reflections on the Venice Effect

The Venice Biennale still offers the worlds of fashion and design the grandest opportunities to impress their finer selves, says Tim Blanks.

Reflections on the Venice Effect

The Venice Biennale still offers the worlds of fashion and design the grandest opportunities to impress their finer selves, says Tim Blanks.

VENICE, Italy — Let’s get lost. Throw away the map and wander. That’s always been Venice’s open invitation to visitors. It’s even more tempting when the city hosts its biannual art fair. The 57th edition opened to the public on Saturday and will run for the next six months. This time there are 85 national pavilions, which is why the Biennale is often referred to as the art world’s Olympics. Or maybe — given the glamorous palaver of the fair’s preview days last week — its Cannes. The main venues are the Giardini, the gardens originally laid out according to Napoleon’s masterplan for Venice, and the Arsenale, a massive converted naval warehouse, both at the top of the Grand Canal, but there are events and exhibitions all over the city, in magnificent palazzos, down any one-person-wide alleyway. You need to get lost — and also resign yourself to the fact that you can’t possibly see everything on offer.

Last time I made it to the Biennale, the curator was wunderkind Massimiliano Gioni. His focus on the alternate realities created by artists — many of them working in alternate states, way outside the margins — was often mesmerising. The 57th is curated by Christine Macel, from the Centre Pompidou. She’s called it Viva Arte Viva, which could be loosely interpreted as referring to art plonked down in the middle of living. There was a whole lot of “real” life in the Giardini’s Main Pavilion, and in the Arsenale, where Macel divided her theme into nine “pavilions” populated by 120 artists from 51 countries. There were people sleeping, people making things, mending things, human industry on display. I particularly liked the Pavilion of Artists and Books: Geng Jianyi’s hand-bound books soaked in coloured ink, Abdullah al Saadi’s hand-lettered scrolls rolled up in old Twinings tea caddies, John Latham’s charred tomes. But I love books. Elsewhere, much of it felt like looking into someone’s workspace, messy, intimate, most engaging, maybe, if you were the actual artist. 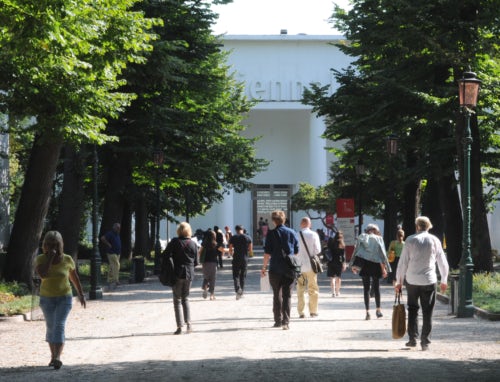 Among the many affinities shared by art and fashion, the most relevant is their ability to reflect their times, and project that reflection into some kind of prediction. Viva Arte Viva’s often humble emphasis on craft – there was fabric hanging everywhere, a literal expression of the artist’s hand at work – mirrored contemporary fashion’s preoccupation with the artisanal past, as a way to customise, to individualise a human response to the incomprehensible present. I guess it could be seen as a retreat into the reassurance of tradition, but the impulse is forward-looking, optimistic: I make, therefore I am. (In fashion terms, would that be, ‘I wear, therefore I am’?)

It found much more visceral expression in the individual national pavilions. Mark Bradford, artist-in-residence for the United States, called his installation, "Tomorrow is Another Day," after Scarlett O’Hara’s hope-in-adversity battlecry at the end of "Gone With the Wind." Black, gay, nearly 7ft-tall in shoes, Bradford could scarcely do more to stand out in Trump’s America. Challenged to represent a country which he feels no longer represents him (as he already famously told the New York Times), he reconfigured the gleaming white, neo-classically columned, cupola-ed US pavilion, nicknamed the White House, as an eerie journey through darkness and decay to a final exultant video piece of a friend sashaying away from the camera down an LA street in white tank top and yellow shorts, hips swinging like Marilyn Monroe’s in the final scene of "Niagara" (Bradford’s inspiration for the video). 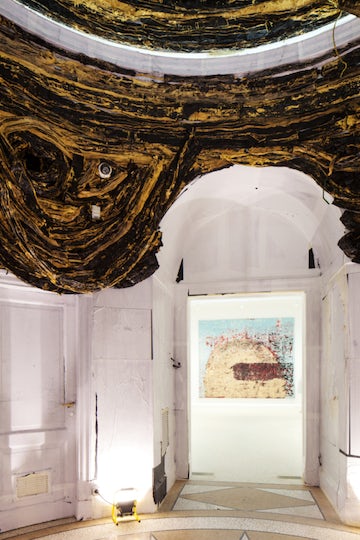 Works by Mark Bradford in the American pavilion | Source: Courtesy

A similar process — joy trumping pain and loss — made Geoffrey Farmer’s transfiguration of the Canadian pavilion a triumph. The building is in the process of being renovated so Farmer was able to gut it and turn the whole thing into one huge fountain. The genesis of the idea was a 1955 collision between a train and a lumber truck, which indirectly brought about the death of his grandfather. So Farmer’s fountain spectacularly spewed from a trompe l’oeil pile of planks, cast in metal. If its explosive violence evoked the accident, there was also the simple, transcendent rush of water, like fireworks in aquatic form. People got wet and didn’t care.

Water squirted from everything in Farmer’s installation: a grandfather clock, a book, a folded duvet, a railroad track. Water is magical in Venice. On one late-night walk back to the hotel, a high tide, acqua alta, was washing across the Piazza San Marco. Women slipped off Louboutins and Viviers to walk barefoot to their water taxis. Surreal. The knee-high plastic waders flogged by street vendors instantly became the accessory of the moment. Equally surreal: Giorgio Andreotta Calo’s reflecting pond, an astonishing optical illusion in the Italian pavilion (appropriately called Il Mondo Magico).

Fendi hosted a dinner to celebrate Il Mondo Magico at the Scuola Grande di San Rocco, where I was assured 70 of the world’s Tintoretto’s are to be found, including a massive, majestic "Crucifixion" which turned imperturbable gallerist Jay Jopling into a euphoric fanboy. The Venice effect! In a season when the industry’s biggest names have been making promotional moves that are more extravagant than ever (Dior’s LA and Louis Vuitton’s Kyoto Cruise shows happened while the Biennale was previewing), Venice still offers the worlds of fashion and design the grandest opportunities to impress their finer selves on the planet — or at least prove they are patrons quite the match of the Medicis. 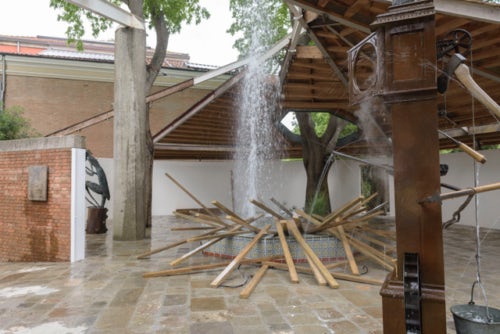 Until November, the Fondazione Prada, in the Ca’ Corner della Regina, is showing "The Boat is Leaking. The Captain Lied," a three-way collaboration between filmmaker Alexander Kluge, set designer Anna Viebrock and artist Thomas Demand, who cross-reference each other’s work across three floors. It might sound academic, but each floor opens into a blank lobby lined with doors, loaded with promise, which adds an element of play (literally, because most of them were taken from Viebrock’s stage designs). Behind Door Number One? Room after room so packed with art and ideas that it would take days to unpick them all. Miuccia Prada, in big sweater and skinny jeans, looked positively giddy with excitement as she guided visitors around the grand opening. I walked away fixated on a video of one of the environments Demand makes entirely from paper: an office with everything sliding relentlessly backwards and forwards, like those CCTVs filmed during earthquakes in Japan. But I also loved the roomful of gloomy paintings by 19th century Milanese artist Angelo Morbelli. Never heard of him, but now I’m a rabid fan. More of that Venice effect.

The other grand fashion patron in Venice is Francois Pinault, chairman of Gucci’s parent Kering. This year, he is responsible for the elephant in the Biennale’s room. Though it’s not part of the fair itself, Damien Hirst’s giant show "Treasures from the Wreck of the Unbelievable" was the polarising talking point of the preview days. His re-imagination of the trove retrieved from a wealthy collector’s ship submerged for two thousand years fills both Pinault’s exhibition spaces, the Punta della Dogana, the old customs house, and the Palazzo Grassi on the Grand Canal. Its sheer scale is just one of the reasons why it has inflamed purist art world sensibilities — and why it will enthrall just about everyone else this summer. The three-story-high bronze god (resin, actually) in the courtyard of the Grassi is enough to render resistance futile. Even a churl couldn’t deny the degree of craft (ten years’ work by 250 craftsmen in five countries) or the quality of materials: the Buddha sculpted from one single massive block of jade, the Medusa carved from a piece of gorgeously lurid green malachite, a mineral so toxic the sculptor must wear gloves. That particular piece alone required three years of work. 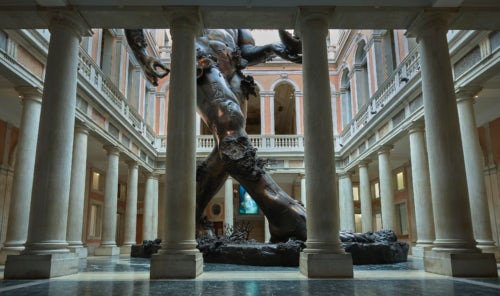 There were some things to love (four bronze lizards on a rock? I’ll take that!), a hell of a lot to admire, and some things — like the fake coral — that were eventually much too much. I walked away awed by the protean obsession of the artist — and wondering what would remain if you were to submerge a contemporary equivalent of his “ancient” collection for another two thousand years. Not much, I’d imagine. Maybe that was a telling acknowledgement of the impermanence of the digital world we’re so busy creating. Nothing lasts forever, now more than ever.

And why would you want it to? Unless you’re the Belgian collector/aesthete Axel Vervoordt, who curates his last show at the Palazzo Fortuny this year. It’s called "Intuition": "When the body functions spontaneously, that is called instinct. When the soul functions spontaneously, that is called intuition." This particular palazzo is one of Venice’s most atmospheric, ripe with shadowy, velvety decadence, and Vervoordt has always done it full justice with his absorbing hybrids of antiquity and modernity: fetish objects from 6000BC sharing space with a mystical interactive piece by Ann Veronica Janssens from 2017 which utilises steam. Again, the magic of water.

The very old and the very new work together in Venice in ways that would be confusing anywhere else. The density of the place, layer forced on layer, with the water always lapping at the door, made reconciliation of past, present and future a matter of survival. On my last night, I had dinner at the Aman, once the Palazzo Papadopoli, named for the Greek family who lived there in the 19th century. Earlier owners included the Tiepolo family (one ceiling was allegedly painted by the master Tiepolo). The walls are still Baroque damask, but now, the furniture is low-slung leather by B&B Italia. It’s an absolute culture clash but it’s Venice — and Italy — and both elements have such integrity that they co-exist quite comfortably. That is one reason the city has been able to absorb the Biennale, and foster it for decades. It might seem to be counter-intuitive to embrace the notion of never quite knowing how to get where you’re going. But Venice makes a fog of ignorance a delight. When the fog lifts, you’re in heaven. And then you go back to the start, and get lost again.