How low-priced, trend-driven fashion start-ups armed with e-commerce are carving out a niche in the market.

How low-priced, trend-driven fashion start-ups armed with e-commerce are carving out a niche in the market.

NEW YORK, United States — The rise of fast fashion has been nothing short of meteoric. Over the last decade, giants like Zara and H&M have conquered large parts of the market thanks to a powerful mix of runway-inspired product, cut-rate prices and large store networks. Now, a wave of indie, low-cost fashion players armed with e-commerce — from Style Mafia and Finery London to W Concept and Genuine People — are seeking a slice of the pie.

“We’ve definitely seen an uptick in these smaller, independent fast fashion labels that have been able to successfully carve out a niche,” says Bernadette Kissane, an apparel analyst at Euromonitor, noting lower barriers to entry for e-commerce players and the rise of Millennial consumers, who hunger for trendy fashion and are entering their peak purchasing years.

Nickyl Raithatha, founder of UK-based Finery London, which launched in 2014, saw an opportunity to build a “premium high street” brand online after watching the rise of e-commerce companies like Reformation in the US. “That approach wasn’t really being done in Europe,” he says. “I felt that there was about to be a whole new generation of brands that would be built online, and would offer the consumer a new experience and a new retail channel.” At the same time, he and Finery London brand director Caren Downie — who was formerly served as fashion director at ASOS and buying director at Topshop — felt the high street giants were missing the mark when it came to product.

“What we saw since the financial crisis is that a lot of product on the high street became deflationary, and prices were always coming down,” says Raithatha. “As a result, the product was becoming slightly more risk-averse, more homogenous and less brave and exciting.” Seeking to fill that gap, Finery focuses on creating directional styles with trend-driven elements — like an off-the-shoulder neckline — and upscale details at a price point slightly above the high street. The company releases six collections a year and produces a significant chunk — 35 percent — in the UK. “We don’t think of ourselves as fast fashion,” says Raithatha. “The way we operate, it’s more like a designer brand. It’s not disposable.”

Indeed, while the product and price point might bear resemblance to Topshop, little else about the business does. Chief among the differences is that Finery and others like it are built online. 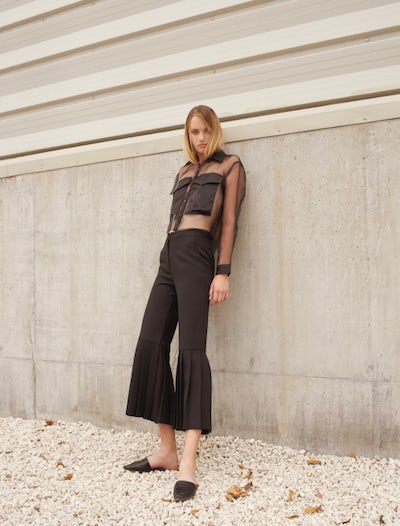 “Fast fashion has yet to be an online phenomenon,” says John Thorbeck, chairman of analytics firm Chainge Capital LLC. “Zara and other big names were relatively late to online. So it’s really been a store-driven experience and the online existed to drive traffic to stores.”

“It’s a wonderful opportunity for a young brand,” adds Thorbeck.

Selling online and often directly to the consumer allows fledgling labels, like Style Mafia, founded in 2013 by Miami-based Simonett Pereira, to keep their prices low and their retail strategy nimble. “We’re not Zara, or this huge multi-million dollar retailer, so we don’t make crazy amounts of one style,” says Pereira. “We make a lot of different styles, but not a lot of each.” This allows Pereira to respond to quick-moving mini-trends while keeping inventory low. She pays close attention to what’s trending on social media, drawing inspiration from the designs tagged in the photos uploaded by influencers. Once a design is hammered out, she sends it to her manufacturers in China, where a garment can be completed in 15 days. “The time frame being so immediate allows us to respond to what the customer wants right now, right away,” says Sarah Humphries, sales manager at Style Mafia. “It’s instant gratification.”

We’re moving toward seasonless merchandising that brings freshness and newness almost on a weekly basis versus focussing on the big seasonal trend.

Even though Finery London operates on a more typical wholesale production schedule — Raithatha says it takes six to seven months for a design to go from inception to storefront — the company is able to adjust their merchandising strategy quickly to address consumers’ immediate needs. “Because we’re direct-to-consumer on our website, we have that flexibility to push product that’s more relevant to the consumer,” says Raithatha. “We might drop a new collection on the site but not highlight it. For instance, if we drop a summer pack and it’s raining and cold out, we probably won’t push it to our customers.” This gives Finery an edge over traditional high street retailers in the UK, who saw sales flat-line this spring amid unseasonably cold weather.

“I really think we’re moving toward seasonless merchandising that brings freshness and newness almost on a weekly basis versus focussing on the big seasonal trend,” says Thorbeck. “The advantage for these startups is they’re starting with this new culture, and don’t have to go through the agonising change that older retailers will have to do to address it.”

Founded in 2014 by husband-and-wife team Sharona Cohen and Nave Avimor, California-based label Genuine People has focused on creating a near-constant flow of new product from day one. “We came into this industry boot-strapped but we knew we had to have a quick turnover in order to compete against other players in the market, who are releasing new arrivals once or twice a week if not more,” says Cohen. “It’s like a new industry standard.” Immediately, the duo could see their instincts were not mistaken. “We saw that people were clicking on ‘new arrivals’ more than any other category, including ‘sale,’” says Cohen. “You would think they would be looking for a certain item, but they’re not. They just want to see what’s new.” 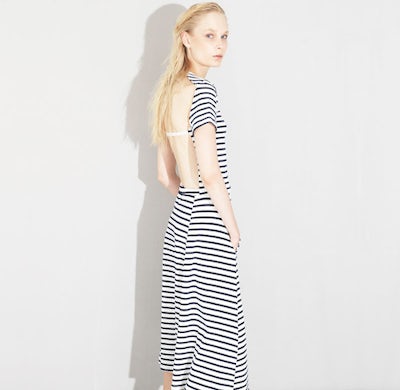 Today, Genuine People releases new styles “almost daily” and, to further keep things fresh, every few days the site has a different theme or focus. “You need to interest shoppers all the time, especially if they’re fashion people,” says Cohen.

The concept for Genuine People was first sparked while Cohen and Avimor were living abroad in East Asia. “We saw that as soon as something was on the runway, practically the next day people were wearing it on the street,” says Cohen. “They are such fast adapters there, whether it’s individuals, manufacturers or designers.”

Unsurprisingly, perhaps, the birth of indie fast fashion can probably be traced back to East Asia, where affordably-priced, trend-driven labels have existed for years. In 2006, WIZWID, one of the largest premium fashion e-commerce platforms in Korea, launched W Concept, a seasonal project that worked with top Korean designers and brands to create limited collections at more affordable prices. Since then, W Concept has grown into its own business with a standalone e-commerce platform — launched in 2011 — that stocks over 2,000 independent brands.

Like Finery London, W Concept does not consider itself to be fast fashion; instead, says Yoona Park, a member of the company’s US marketing team, the company seeks to “provide young emerging designers with a high potential outlet to gain brand awareness and exposure, and support with sourcing, manufacturing, celebrities and influencers.” Yet, the majority of the labels it stocks seem to crib from the fast-fashion playbook, churning out designer-inspired items at low prices, and W Concept describes its strategy as “looks seen on the runway quickly turned into ready-to-wear at affordable prices.” The company releases 50 to 100 items each day, and almost everything is under $200. With local success under its belt — W Concept is now considered one of the top three fashion e-commerce retailers in South Korea — it’s no surprise the company has set its sights on the rest of the world. In November 2015, the company launched sites in the US, China and Canada.

Though Genuine People is based in San Francisco, the company sources about 30 percent of its designs from white label producers in Korea, China and Japan. The rest of their products are designed in-house, but produced and shipped from China. “We have a pretty unique business model,” says Avimor. “First of all, we operate directly from China and we were able to figure out a way to ship packages from China to the US in a matter of days, which has helped us be in the game and maybe even be faster than much bigger retailers in the US.”

While living in Asia, Cohen and Avimor were able to form relationships with local logistics companies that allowed them to ship packages cheaply and quickly. “We’re playing the domestic game here — the shipping fee and the shipping times are the same as you would expect domestically,” says Avimor. Because the company is able to produce and merchandise inexpensively, they’re able to include what would be the cost of shipping within the price of a garment. The site offers free standard shipping for orders over $100, with items delivered within 5 to 10 business days. Shipping for orders under $100 costs $5.99, however, and expedited shipping costs $29.95 and ensures items arrive in between 4 to 8 business days. Returns are processed within the US.

Each of these brands said they were targeting “young, creative professionals” in the 25 to 35-year-old age bracket (for many the sweet spot is between 25 and 30.) It’s an important segment to address. Unlike their younger counterparts who might frequent Forever21 or Brandy Melville, these consumers have more money to spend, higher standards and a more sophisticated aesthetic. In the past, these shoppers might have graduated to contemporary or designer labels. But today, an emphasis on experiential spending and a reluctance to wear the same thing twice, has discouraged higher spend per product.

“Consumers are choosing to spend more on going out, travel and social experiences. That reduces the apparel industry’s share of wallet. At the same time, it could benefit fast fashion players because consumers have less to spend on clothing,” says Kissane. Of course, these “social experiences” wind up on social media, for which consumers are keen to regularly have new items that photograph well. Construction and quality, though valued, are significantly less important since neither translates well in two-dimensions. Many of these brands specialise in statement styles seemingly engineered to rack up likes on Instagram. And, unlike purchases from Zara and Topshop, when you buy from one of these indie labels you’re less likely to show up to a party wearing the same thing as someone else.

“[Retail giants like Zara] have monopolised the whole area, and now it’s working against them among a certain niche customer,” says Kissane. Consumers’ hunger for the new also applies to brands. “They get a kick out of being the first to shop somewhere,” says Kissane. Tagging H&M in an #OOTD on Instagram is fine, but tagging a lesser-known independent label warrants bragging rights.

On that note, these startup brands are often perceived as more authentic, a key value among Millennials. Asked why her customers don’t just go to Zara, Pereira says: “People identify with the fact that we’re a small brand. I’m 25 years old and I started this when I was 22. When I meet people and tell my story, they identify with it and they want to support someone who is local and doing their passion project and also creating styles they want to buy.”

In a challenging market, fast fashion might be the best chance new designer-entrepreneurs have at running a solvent business. “Fast fashion is an opportunity to return to full price retail, minimising inventory risk and maximising responsiveness,” says Thorbeck. “This is significant in an industry where off-pricers now dominate.”

For now, however, these start-ups are a long way away from threatening the established fast fashion giants. “We haven’t seen anything explode on the level that they could even be competing with Zara or H&M,” says Euromonitor’s Kissane. “If there’s potential for that to happen, they’ll have to offer something more than just clothes at a low price. It can’t just be another fast fashion brand.”