‘I don’t necessarily think that a store in Mayfair is going to do anything for me,’ says designer Saloni Lodha on her decision to invest in Instagram friendly events like this weekend’s Holi Saloni in Udaipur, India.

‘I don’t necessarily think that a store in Mayfair is going to do anything for me,’ says designer Saloni Lodha on her decision to invest in Instagram friendly events like this weekend’s Holi Saloni in Udaipur, India.

UDAIPUR, India — It’s fashion week somewhere, but designer Saloni Lodha is busy building a mud hut. “Futuristic” was the word she used in the briefing to London-based architects Mizzi Studio, who are working alongside local artisans enlisted to help her create a bit of magic for “Holi Saloni,” an intimate celebration in Udaipur, Rajasthan, that she’s hosting on the weekend of March 9.

The event is an ode to Holi, the annual spring festival that, this year, took place across India, Bangladesh, Pakistan and beyond the week before. During “the festival of colours,” cohorts joyfully usher in the new season — and the triumph of good over evil — by drenching each other in bright “gulal” powders. Though the festival has more recently been marred by outbreaks of sexual violence and other security issues, Holi is traditionally known for its communal jubilance: there is music on the streets, endless gathering of friends and family, and plenty of laughter between both loved ones and strangers.

For her own festival of colour, Lodha will welcome 130-something guests from her extended network — including Giambattista Valli, Phillip Lim, Eugenie Niarchos, Margherita Missoni and Noor Fares — to the 18th century Devigarh Palace hotel in the village of Delwara, 40 minutes outside of the city of Udaipur. There, she will host a black-tie dinner, outfitting attendees in her custom pieces “in every shade of silk” and then later in Holi whites, when powder will be thrown across the crowds. (The capsule collection introduced during the festivities will later be sold at retail.)

Lodha is also flying in a DJ in from Paris, a mixologist from London, and has produced 400 custom-printed plates just for the occasion. Other collaborators include Mumbai-based creative director Nikhil Mansata, New York set designer Julia Wagner and London hair stylist Angelo Seminara, as well as shoe label Charlotte Olympia, the artists Quentin Jones and Luke Edward Hall, and Amrapali jewellery.

I don’t necessarily think that a store in Mayfair is going to do anything for me. In a global world, a project in India can be as impactful.

“That’s the beauty of India,” says Lodha, who was born in Nashik, a small town in the western part of the country, into a family with roots in the textile industry. (Her maternal grandmother owned a saree and fabric store.) “You can make things like this just happen.”

Just making things happen has long been Lodha’s modus operandi. More than 15 years after she first began casually designing one-off, bursting-with-colour dresses for friends, 10 since she launched her label and seven years since she secured her first retailer, Saloni is a viable, profitable business, with annual revenues projected to surpass $10 million in 2018.

She'd like to nearly double that number by 2020 and events like Holi Saloni just might help. In today’s increasingly visual world, where some of the most effective marketing is designed to feel off-the-cuff, not calculated, hosting events like Holi Saloni — which is likely to garner an avalanche of highly colourful Instagram posts from high-profile attendees — might be one of the best investments a designer like Lodha can make. “I don’t necessarily think that a store in Mayfair is going to do anything for me,” she says. “In a global world, a project in India can be as impactful.”

So, how did she go from selling one-off dresses to convincing dozens of high-profile types to travel all the way to India for a weekend soirée?

The story of Saloni begins in Hong Kong in 2001, where Lodha lived for a time with her banker husband after studying textiles in Mumbai. There, an acquaintance approached her to help in sourcing block-printed textiles from India. She moved there temporarily from Hong Kong for the job, and was inspired to make a few dresses for friends, many of whom are major players on the social scenes in New York and London. The set-up wasn’t formal, but it triggered something in Lodha. “India has so much beauty,” she says. “There was not a single brand — neither international nor domestic — capturing the colour and the essence. I knew I wanted to do print and colour, and for the shapes to be really flattering.” 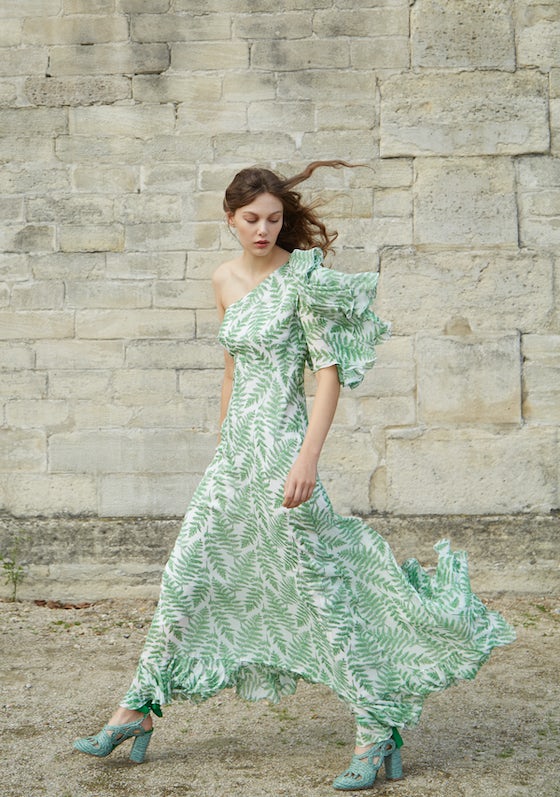 Lodha soon realised there was a market for the wares that extended beyond her inner circle. While she says she never sought out retailers, her first wholesale partner was MatchesFashion, whose co-founder, Ruth Chapman, was introduced to Saloni at Hotel Lotti in Paris in 2011. “There were five or six pieces and we bought them all,” says MatchesFashion co-founder Tom Chapman. “Saloni was one of the first brands to create easy resort pieces that appealed to women’s desire to create a holiday wardrobe that that was cross functional and worked in the city or for events.” Today, she boasts 140 points of sale across the US — including Saks Fifth Avenue, Nordstrom and Bergdorf Goodman — and 60 others around the world, like Le Bon Marché in Paris and Beymen in Turkey. (About 68 percent of revenue comes from the US, 16 percent from the UK and 16 percent from  the rest of the world.)

“She is her customer,” Tom Chapman adds to explain the label’s growing appeal. “A confident international traveller who is not a slave to trends but wants to wear product that is effortless and makes you feel great.”

Many of Lodha's business decisions have been driven by the instinct to make pieces she herself would wear. However, that instinct is a practical one. The clothes are accessible, with many dresses clocking in below $500. And while upstart brands often roll out new categories at a clip in order to accelerate growth, she has stuck almost exclusively to dresses in familiar silhouettes, some of which were introduced at launch. (Including the Alexia, a tiered maxi-skirt shirt dress that typically retails for under $600, depending on the make.) Today, 85 percent of the business is dresses. “If you love a shape, you might have 10 of them in different colours in your wardrobe,” she says. “As the collections have grown, the company has grown.”

I didn’t necessarily want to be on the fashion week schedule. We’re a brand that sells beautiful dresses all year around.

She has also spent little time playing the traditional fashion game. Rather, her impressive network has served as a catalyst for opportunities to dress everyone from Michelle Obama to Jennifer Aniston. “I wanted to do it my own way,” she says. “I didn’t necessarily want to be on the fashion week schedule. We’re a brand that sells beautiful dresses all year around.”

Instead, Lodha has dipped in and out of Fashion Week, choosing to set up offices in both London and Hong Kong, where she currently spends half of the year. (Her husband’s work has taken the family from Hong Kong to Mumbai to London to Seoul and back.) “I run my company on Google Drive,” says the mother of two.

Lodha may still operate on her own schedule, but she is downright serious about her next stage of growth. In 2016, Saloni’s parent company took its first outside investment with the aim to finally develop other categories — perhaps homewares, a passion for the designer (who comes from a country where the best form of entertaining often happens at home), and also knitwear — and drive sales to underpenetrated regions, such as Eastern Europe, Russia and the Middle East. (One way she plans on doing that is by investing in her own e-commerce platform.) She will also introduce a capsule collection designed in collaboration with her friend — and Holi Saloni attendee — Niarchos.

More than anything, though, she plans to keep staging interactive experiences in the same vein as Holi Saloni. In fact, retail partners are already dreaming up ways to bring Holi Saloni to their own doors. “I might pitch a tent at Saks,” she says. “Or maybe I can do a Holi Saloni pop-up next year in Los Angeles or New York. Creating ideas and concepts is joyous — and on brand — for me.”

Editor's Note: A previous version of this article stated that MatchesFashion co-founder Ruth Chapman first viewed the Saloni collection at London Fashion Week. This is incorrect. The collection was first viewed in Paris.