A flurry of high fashion labels have opened their first flagships in elite London real estate. With sky-high retail rents and customers accustomed to shopping online, is a physical store worth the investment?

A flurry of high fashion labels have opened their first flagships in elite London real estate. With sky-high retail rents and customers accustomed to shopping online, is a physical store worth the investment?

LONDON, United Kingdom — Inside Hussein Chalayan’s new Bourdon Street store, in the heart of London’s Mayfair, a black wooden boat looms among the clothing, and slanted rails make you unsure whether the floor, the ceiling — or you — are off-kilter; at Erdem on nearby South Audley Street, works of art by Hockney and Warhol compete for attention with a luscious Victorian fern garden; meanwhile, around the corner on Mount Street, Simone Rocha welcomes guests to step among a wedding-cake-worthy array of pink flower-shaped tables and ornate white pillars.

A first store is a turning point for a fashion business — direct retail allows a brand to bring in customers, capture sales and earn more of the margin that was previously shared with wholesale partners. But it also comes at a price — astronomical rent costs, not to mention the financial and logistical investment of employing staff and carrying inventory. And, in a digital age, doesn’t the consumer value convenience over in-store extravagance?

A clutch of British brands would disagree.

“We are above 100 percent like-for-like sales, up on our first month,” Carmela Acampora, chief executive officer of Roksanda, told BoF in July, one year after the first store opened on Mount Street in Mayfair. “Our conversion rate is around 50 percent in our store. I haven’t seen those numbers before!” 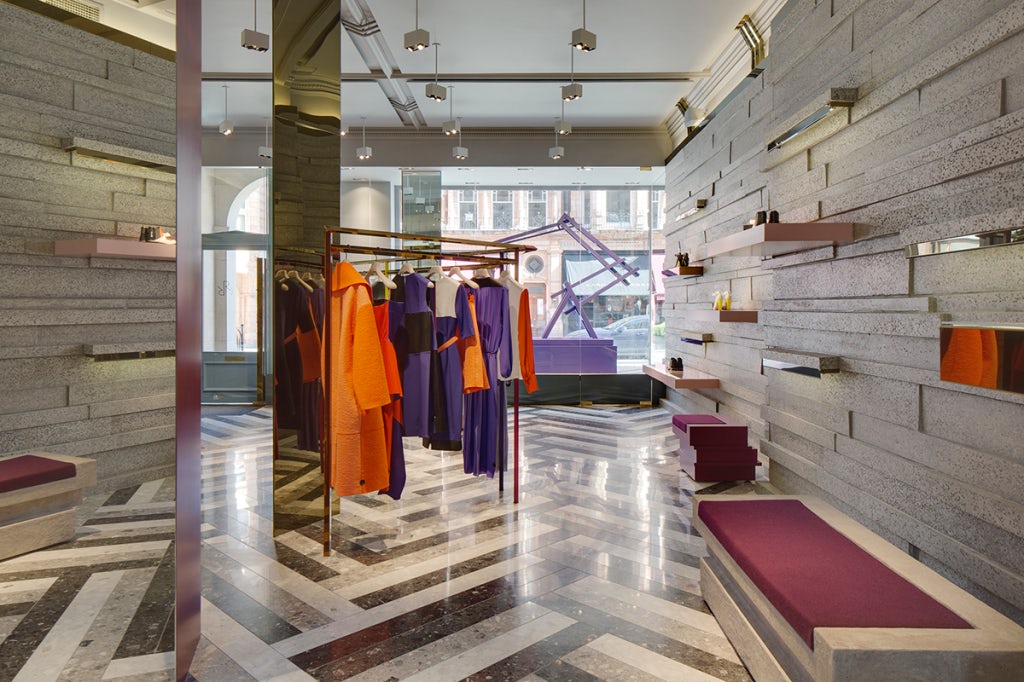 The inside of Roksanda's store | Source: Courtesy

But setting up shop in area like London’s Mayfair — where all of these brands have recently opened their first stores — is no guarantee of turning a profit, and market sources suggest some are not performing well in terms of sales. “Often, these mono-brand stores are not profitable — but they could be, as the receptacle of all ‘maison’ private and celebrity clients,” adds Luca Solca, head of luxury goods at Exane BNP Paribas. “If you only have one store, you may ask all ‘maison’ clients to go to it.”

The southwest corner of Mayfair that these designers inhabit is a relatively new pin on the fashion map. In 2005, Mount Street didn’t have a single fashion store. But since 2006 — when Marc Jacobs moved in — Grosvenor, the landlord responsible for curating much of Mayfair, has set about transforming the area.

Pavements were widened, new tenants rigorously vetted (according to The Times, brands including The Kooples didn’t make the cut), and Mayfair’s old-fashioned storefronts and traditional terraced houses were soon transformed into a walk of fame for luxury fashion.

“Mount Street is not a heavily trafficked street by pedestrians, but actually the conversion rate for retailers is very good, because people go there to spend money,” says Cooper. Indeed, while footfall is lower than at blockbuster shopping destinations like Selfridges on Oxford Street and Harrods on Brompton Road, the Mayfair clientele is discerning. The area is home to luxury hotels like The Connaught and Claridge’s, members clubs Harry’s Bar and George, and restaurants such as Scott’s and 34, which are frequented by high-spending customers.

“It's a challenge. Obviously because Mount Street is very new, it might be on the destination for the fashion girl, but we had to drive the tourist,” adds Christopher Kane, whose first flagship — an all-white minimalist dwelling designed with architect John Pawson — opened in March on Mount Street, a few doors down from Roksanda. 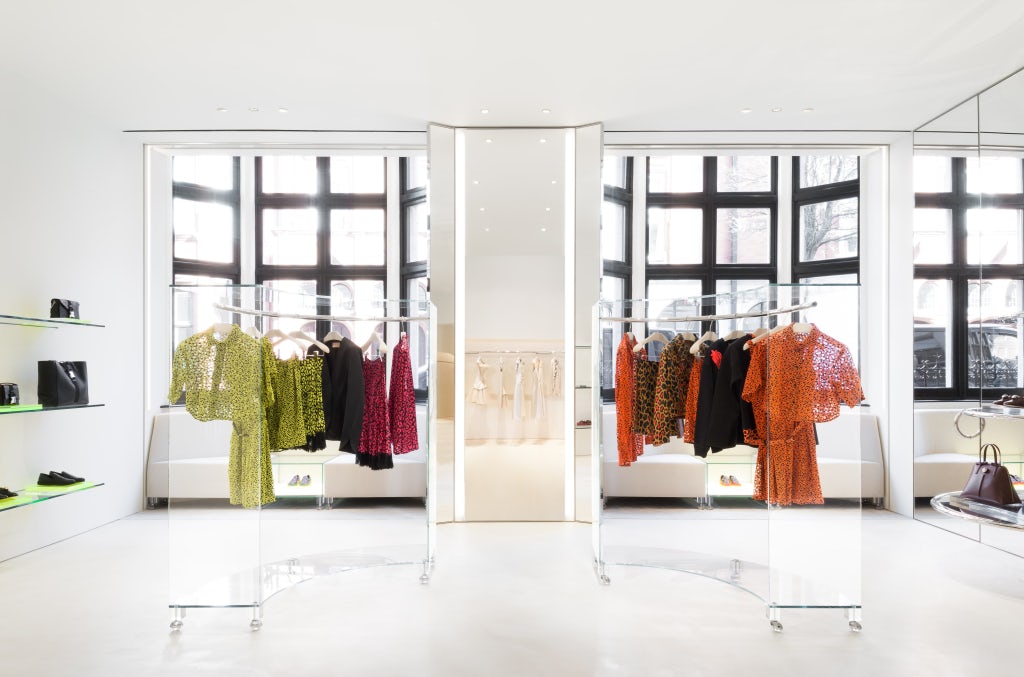 By choosing an elite store location, designers are not only courting sales, but status, too. “In terms of marketing, we want the shop to be a brand in itself,” says Hussein Chalayan, whose flagship is located in an emerging arts district, steps away from the Phillips contemporary art auction house and the soon-to-open Gagosian Gallery. “It’s in a cultural hub. Because of where we are, it’s a lot easier for press to come.”

“There’s so much that they can do with a standalone store, which they can’t do if they are in a department store and doing wholesale,” concurs Fflur Roberts, head of luxury at Euromonitor. “They can have their own events, whether that’s with professionals, sales, or customer evenings.”

“Small designer brands see their first store as their first flag on the map. A sign they exist and ‘have made it’ in the real world,” says Luca Solca. Indeed, they pay for the privilege: from 2006 to 2012, rents on Mount Street rose by 300 percent. This March, The Sunday Telegraph reported that the retail and restaurant units in 14-25 Mount Street pull in combined rents of more than £1.8 million ($2.8 million) a year.

A first store also opens a dialogue between a brand and its customer — a designer can test out products, get feedback first-hand, clarify their product assortment, and have full control over how it is presented, sold and discounted.

“[With wholesale] you really have to respond to the buyer and take into consideration their needs. The showroom is massive and there's such a big collection that it's only a select amount of items that the wholesaler will buy, but when you have your own retail space you can tell the story much more,” says Kane.

“It’s been an incredible experience to speak with my customers directly,” agrees Roksanda Ilincic. “When you’re doing that through shops that are not your own, the information that you get is limited. Now, we are building all this data ourselves.” According to chief executive Acampora, deciding which products should adorn the store’s golden slabs of shelving has been a learning curve: “Previously, we were never buying anything in-depth. What are the pieces that we are really going to believe in — we’re betting on all of that now.”

While the fierce competition for locations may have made some of these investments a case of “now or never,” the timing of a store opening is significant. This year, Simone Rocha’s label turns five; Roksanda, Erdem and Christopher Kane all opened their flagships around their 10th anniversaries; and Hussein Chalayan’s first store represents another coming of age: the label’s 21st anniversary. 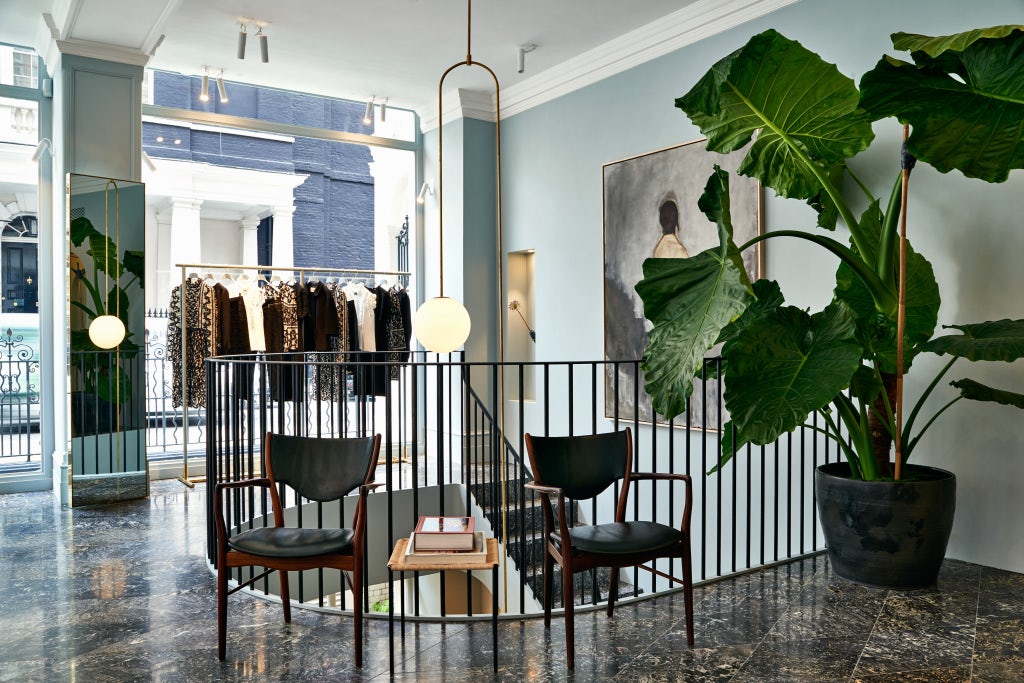 Moreover, the launch of Kane’s store follows Kering’s majority stake investment in the company in 2013. Roksanda, too, set up shop shortly after securing her first investment from Indian businesswoman Eiesha Bharti Pasricha: “We did secure the place for the store [before the investment], but we wouldn’t have been able to do the store the way it is without the investment,” says Ilincic.

Erdem Moralioglu, on the other hand, whose business is predicted to generate £10 million ($15.5 million) in revenue this year, privately funded his first flagship. “I understood five years ago that I would eventually open up a store, but I wanted to be able to do it independently,” says Moralioglu. “Five years ago, I wouldn’t have had those resources. Now I do.”

Hussein Chalayan, whose business was bought by Puma in 2008, only for the designer to repurchase Puma’s stake in 2010, enjoys a different type of cult status to these relatively young London designers. He is known for his collaborations with the arts; exhibiting pieces in galleries and museums and, most recently, working on ‘Gravity Fatigue,’ a contemporary dance performance at London’s Sadler’s Wells. “The investment that I’ve had into my brand and the number of different things I’ve done hasn’t necessarily given me space to do something like this,” says the designer, who has previously served as creative director of Esprit and Puma, and this week joined the design team at Paris couturier Vionnet. “I think that we could have opened a store ten years ago… but building that experience has been very important.” 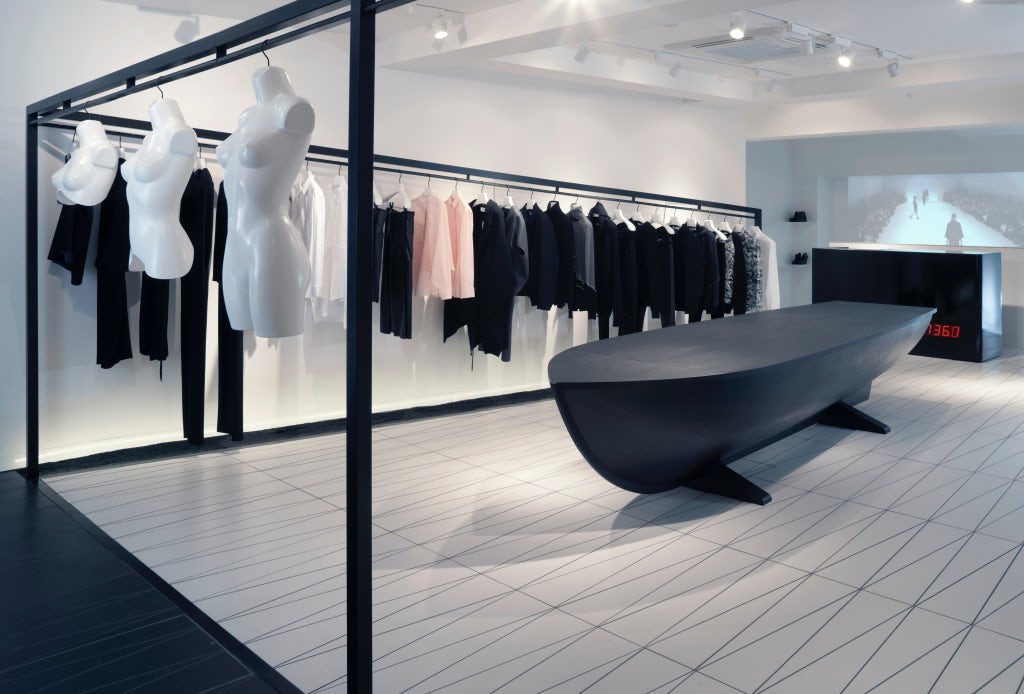 Indeed, it can take years to build up the ideas, the brand identity and the product range needed to fill out a store. “It takes a while to build your own DNA, even if you’re a really, really focused designer that is doing very similar things from season to season,” says Ilincic. “It’s too early to start a shop at a time when people don’t quite know what you’re about yet.”

And then, there’s the digital question. While it may seem surprising that Roksanda, Hussein Chalayan and Christopher Kane have all prioritised a physical location over launching e-commerce, according to a 2014 report by McKinsey & Company titled 'Luxury Shopping in the Digital Age,' e-commerce represents only four percent of luxury sales at an estimated €9 billion (almost $10.2 billion), though that figure is expected to reach approximately €20 billion (around $20.6 billion) in the next five years.

“I don't think digital sales will ever make physical stores completely obsolete,” says Ilincic. “The architectural space and materials used to create it, lights, fragrance, the flowers, and, of course, direct interaction and feedback from the shop team — all these play vital roles in allowing customers to experience the full potential of the brand.”

Rather than being divorced from digital, these physical flagships present an opportunity for omni-channel retail, combining the in-store experience with the convenience of e-commerce. “We’re hoping that our customer can come in, try something on and eventually order it online, because they want it to be delivered to their house. [The store] can actually be the space in-between the two,” says Hussein Chalayan.

Certainly, the red-brick storefronts, sumptuous changing rooms and in-store events that Peter Wetherell, founder and chief executive of Mayfair estate agents Wetherell, describes as “the ‘experience revolution’ that is sweeping through high-end brands,” are great fodder for digital platforms like Instagram — Simone Rocha’s store has its own account.

For Roksanda, Christopher Kane and Erdem, plans for more physical stores are in the pipeline, though the designers remain tight-lipped on the timings and locations.

“To have a store in every city in the world, it's a dream of every designer,” says Kane. “I’m not going to lie, I'd love it to happen tomorrow.”