Supersize Me: Is There a Plus-Size Opportunity in Men’s Fashion?

The plus-size and menswear sectors have grown rapidly in the last few years — but is there a market for trend-driven plus-size men’s fashion?

Supersize Me: Is There a Plus-Size Opportunity in Men’s Fashion?

The plus-size and menswear sectors have grown rapidly in the last few years — but is there a market for trend-driven plus-size men’s fashion?

LONDON, United Kingdom – When Leo Park was younger, he was — by his own admission — a bigger guy. As a child, he often had to wear adult’s clothing. Many of his family members were bigger too, but, living in South Korea, there was little in the way of plus-size menswear to choose from. “Fashion for the big guy wasn’t a thing, whatsoever,” he says. “I always wanted to dress better, but it was frustrating when we weren’t able to find fashionable clothes.”

The lack of choice stayed with Park, even when he had grown up and slimmed down. In June this year, he and a friend, Irfan Hajee, launched online brand Parker and Pine with the intention of creating well-fitting, modern clothing for the bigger man. Park predicts 5 percent month-on-month revenue growth throughout 2016. That projection, he says, is the “conservative scenario.”

Currently, plus-size fashion is one of the apparel industry’s fastest-growing sectors. In 2014, NPD valued the US plus-size womenswear market at $17.5 billion, up 5 percent on the previous year. There are no existing statistics on the size of the US market for plus-size menswear. However, in the UK, where overall plus-size clothing sales reached £5.1 billion (about $7.76 billion) in 2014, plus-size menswear topped £2 billion, according to research firm Conluminio.

But is there really a market for on-trend, plus-size men’s fashion? According to a report by Verdict Retail, 57.9 percent of “big and tall” menswear shoppers “agree that they would spend more on clothing if there was more choice available to them.” On the other hand, only 30 percent of plus-size men surveyed by Mintel consider themselves “fashionable” and “stylish.”

Meanwhile, much is being made of the burgeoning menswear market. In 2014, the menswear sector outpaced womenswear in terms of growth for the second year in a row — a trend that is expected to continue until 2019, at which point menswear is expected to contribute $39.7 billion in sales to the global apparel market, according to Euromonitor. The research firm also notes that men’s average disposable income is 50 percent higher than women’s. “They actually have the money in their wallet to spend on clothing,” says Bernadette Kissane, apparel and footwear analyst at Euromonitor.

But despite the growth in both plus-size fashion and menswear, outsized fashion for men has, so far, been left behind. In 2014, there were fewer than 1,000 dedicated plus-size men’s clothing stores in the US, compared to nearly 6,000 for women, according to Ibis World. Most of these are specialist “big and tall” retailers that focus on basic styles — while a small number of mainstream brands, such as Ralph Lauren and Gant, and department stores like J. C. Penney cater to plus-size men, most of the styles they offer are a “a variant on the American classic,” says Park.

To Park, the market for well-fitting, fashion-forward plus-size menswear “is still underserved.” Before launching Parker and Pine, he and Hajee interviewed thousands of plus-size men, to find out what was missing in the market. The answer: “literally everything,” he says. The label launched with underwear and has since expanded into shirts — a product that interviewees experienced particular issues of fit with.

However, aside from “a handful of small brands,” like Parker and Pine, “there isn’t a lot of innovation happening in the industry right now,” according to Sturgell, who launched Chubstr.com in 2011 to voice his frustration at the lack of choice and fashion advice available for plus-size men. “There’s long been a misconception that men don’t care all that much about what they wear or how they look. Plus-size men hear this even more than their mainstream counterparts,” he says.

Eyeing the “missed opportunity” in the market, and convinced that there was a “real interest” in fashion amongst plus-size men, in 2013, he launched an e-commerce store that curates well-fitting, stylish menswear products — from denim shirts, to slim fit shorts — in sizes up to an 6XL. “We regularly see three to four times the conversion rates of an average e-commerce site,” says Sturgell — a fact he puts down to the site’s “unique focus” on an underserved market.

In the UK, retailers willing to branch into trend-driven product or design garments specifically for larger sizes have also experienced fast growth. In the three years since it launched, bigdudeclothing.co.uk, a UK e-tailer that goes up to an 8XL and stocks brands like Dr Martens and Lambretta, has grown 150 percent year-on-year.

In 2007, UK company JD Williams — which owns several “big and tall” clothing specialists including High & Mighty and Premier Man — launched Jacamo; a fashion-focused menswear retailer aimed at younger plus-size shoppers that stocks sizes from a small up to a 5XL. Jacamo’s projected revenues for 2015 are “just under £100 million,” says Martin Roberts, head menswear buyer for JD Williams. Ninety percent of sales come through its e-commerce site and the company also operates 15 UK stores and a catalogue business.

Jacamo offers customers “virtually the same as you’d get from the fashion retailers on the high street,” says Roberts. “It really is an old-fashioned concept that a gentleman that has got a 50-inch waist and a 4XL chest just wants a plain pair of five-pocket western jeans, a plain t-shirt and a hooded sweatshirt.” 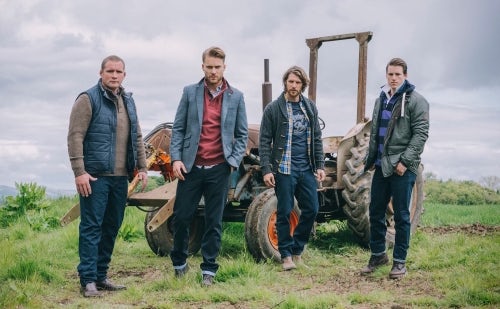 Raging Bull, another men’s lifestyle brand, which launched in the UK in 2007, has opened 33 concessions in department store House of Fraser, with reported annual sales of £3 million. For the past three years, the label has seen at least 50 percent sales growth year-on-year. Like Jacamo, most sales are made online — and, also like Jacamo, the majority of these online sales are in a size 2XL and above, according to managing director Shannon Mercer.

Part of the reason plus-size menswear remains in short supply is down to the challenges of outfitting a larger man. “It’s not just a case of bolting on a couple of sizes to your existing size spec,” says JD Williams’ Roberts. “You really need to understand the idiosyncrasies of that customer’s larger body.”

“You have that extra raw material cost,” adds Mercer, referring to the additional material required to manufacture apparel in larger sizes. Raging Bull adds a premium of around 10 percent to the cost of its larger garments, “to pass some of that [cost] onto the consumer,” she says.

This is a particular sore spot for high-street brands and retailers, whose consumers look for value. As a result, “Mass merchants probably have the best opportunity to continue serving the market in the short term,” says Diana Smith, senior retail and apparel analyst at Mintel.

There is also an extra cost on the shop floor, where valuable retail space is quickly eaten up by displaying extra sizes. For this reason, both Jacamo and Raging Bull stock restricted sizes in their bricks-and-mortar outlets, while the majority of brands with “big and tall” lines offer their ranges primarily through e-commerce.

Indeed, in some ways, e-commerce is uniquely suited to the male plus-size customer. Not only do plus-size customers shop disproportionately through the Internet, but men are also prone to shopping online more, because “their whole shopping process revolves around the process of being convenient,” says Kissane. In Mintel’s 2015 survey of plus-size customers, 84 percent of men said that they shopped for “big and tall” products online.

However, the dominance of long-running specialist stores should not be underestimated, according to Darrell Freeman, founder of bigdudeclothing.com. “There are established players in this market,” he says, pointing out that plus-size menswear customers are particularly loyal.

“If you think about the lack of brands, the men who are already shopping with them are likely to be loyal because they’re the only ones out there doing it,” agrees Kissane.

Still, some are confident that outsize menswear will follow the recent growth of the plus-size women’s market. “If it’s men’s fashion now, plus-size fashion will be next,” says Leo Park. “It’s natural progression.”