Japan’s YKK Group and China’s SBS control more than half the world’s zipper supply. In this global fastening arms race, who will come out on top?

Japan’s YKK Group and China’s SBS control more than half the world’s zipper supply. In this global fastening arms race, who will come out on top?

LONDON, United Kingdom — For a seemingly mundane business, the global zipper trade has evolved in a surprisingly cutthroat way. Two Asian superpower firms have found themselves head to head in a rivalry that is impacting the supply chain of most major fashion brands.

Experts estimate that between them, Japanese giant YKK and Chinese challenger SBS account for well over half the global zipper market. And as the battleground is evolving, so too are their tactics to outdo one another.

Traditionally, YKK has been the more successful player. Established in 1934 by Tadao Yoshida, the Japanese manufacturer grew at an impressive pace, surpassing American manufacturer Talon, which invented the zipper and was once the largest fastening force in the world, in just four decades. Present in 71 countries, YKK is currently the largest producer of zippers worldwide. But its position is far from secure.

The global zipper market is highly fragmented, and competition is reflected in terms of cost, quality and innovation.

Twenty years ago, there was little doubt about YKK’s stronghold on international apparel businesses. Yet today, prominent clients have been abandoning the Japanese titan, opting to buy from Chinese competitors instead.

Leading this Chinese wave is SBS Zippers. Unlike YKK, SBS is a relatively new player in the zipper market. Founded in 1984 in the small Chinese coastal town of Jinjiang, SBS first garnered attention for selling affordably-priced zippers to mass-market brands, before becoming a global fastening force in its own right. SBS declined to comment on its recent progress but over the past decade, the company has noticeably invaded YKK’s territories.

According to the 2015 Zipper Market Research Report from Global Industry Analysts, a US-based market intelligence source, “the global zipper market is highly fragmented, and [competition] is reflected in terms of cost, quality and innovation.” The dominance of low-cost Asian manufacturers from China has also “intensified the competitive heat” in an international market that will be worth $13.7 billion by 2020.

According to marketing information released by SBS, China is the biggest zipper producer in the world today. The company’s own facilities include five production bases across the country, producing 80 million zippers and 1.4 billion sliders monthly, making it the largest domestic producer by volume.

The YKK Group was a latecomer in China, only establishing its first production centre in the nation in 1992. Nevertheless, the country has become a key market for the Japanese manufacturer, which now operates two factories on the mainland. According to Global Industry Analysts’ report, in response to SBS’s rapid growth in recent years, “[YKK] is launching various strategies in order to expand market presence in the growing markets of Asia, particularly China.” 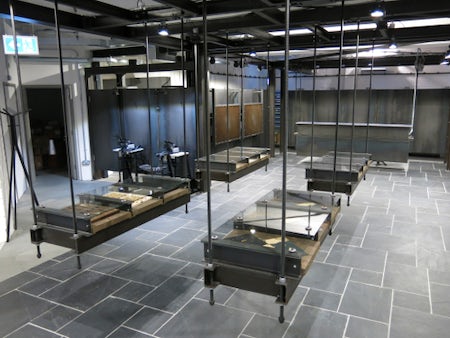 As part of its wider strategy to adapt to this shifting market, last year YKK also opened a European showroom — the first of its kind — in the heart of London’s Shoreditch. Designed by architect and fashion designer Kei Kagami, the space is a showcase for the zipper giant’s newest and best fasteners — the type typically found on luxury handbags and technical garments — and aims to satisfy the company’s need to connect directly with young designers and even the end consumer.

When it comes to the fashion industry, there are three battlegrounds in which zipper manufacturers wage their ongoing war — each based on price segment.

The luxury market is the most important segment of the industry in terms of design and innovation. Historically, a handful of European brands controlled the top end. Italian manufacturer, Riri, founded in 1936, has produced smooth and shiny fasteners for the likes of Maison Margiela and Dries Van Noten. Raccagni, founded in 1983, has produced custom high-end zips in collaboration with Tom Ford. Likewise, longstanding manufacturer Lampo, founded in 1887, is the exclusive fastener partner of Balmain.

Given the intense competition of the low and mid-market over last few decades, YKK, and recently SBS, have turned their attention to the highest tip of the pyramid. While YKK has rolled out products like the “Excella” — the company’s highest-end fastener intended to rival the products of their Italian counterparts — SBS has been dedicating more resources to research and development.

Part of YKK’s success in competing at the higher end can be attributed to the multi-faceted nature of YKK Group, which also operates a machinery and engineering arm. The firm not only makes the zippers, but also the equipment that allows them to do so. This ecosystem where innovation in one arm translates into another allows for a highly synergistic production cycle. It also allows YKK to make uniquely customised products.

But the big fashion houses aren’t the only clients who can leverage these services. “Since last season, I’ve used YKK zippers exclusively,” says Chinese designer Xiao Li, who was shortlisted for the LVMH prize in 2015. “It’s important to choose quality zippers that coordinate with my design — sometimes, the zipper is a part of my design.”

To a certain extent, SBS has started to imitate YKK’s strategies, assembling an in-house research and development team and amassing more than 380 patents — a number second only to their Japanese rival. By moving out of its comfort zone, SBS has acquired high-profile clients including Giorgio Armani.

But SBS is yet to overcome the negative stereotypes and connotations of being a Chinese manufacturer — which has typically been associated with low-quality products. “We used SBS in the past; however, their quality couldn’t meet KTC’s quality requirement, therefore we are using 100 percent YKK since many years,” explains Gerhard Flatz, managing director of KTC, a manufacturer of luxury performance apparel based in Hong Kong, which produces $3,000 coats for the likes of London-based designer Yang Li.

At the budget end of the spectrum, neither SBS nor YKK can reasonably rival the thousands of small traders, primarily in China and India, desperate to undercut each other in price. Instead, SBS has found success in the global middle market — the most lucrative segment largely due to the sheer scale of production — amassing an expansive list of clients including Mango, the North Face, H&M and Target.

But SBS isn’t the only Chinese company seeking a piece of the international middle market. Domestic rivals, such as Wuxi’s CMZ Zipper, are following SBS’s lead in exhibiting at international trade shows and working with Western fashion giants such as Zara and Calvin Klein, as well as accessible luxury labels like Michael Kors — the price range that SBS remains most comfortable with.

Given the relative similarity of products in the global zipper market, Western clients have been reluctant to enter into exclusive partnerships with a zipper manufacturer. For instance, although SBS boasts Mango as a primary partner, a representative of the company clarified that “SBS is one of the zipper suppliers Mango works with, but it is not only one nor the main one.” More telling still, is that both SBS and CMZ name Walmart, Target, and Carrefour as clients — indicating that even the global mid-level battleground is more competitive than it seems.