What lies ahead for the new creative configurations at Saint Laurent, Lanvin, Dior and Valentino? BoF examines the challenges and opportunities they face.

What lies ahead for the new creative configurations at Saint Laurent, Lanvin, Dior and Valentino? BoF examines the challenges and opportunities they face.

PARIS, France — This Paris Fashion Week is rich with debuts. Today, Anthony Vaccarello will show his first collection for Saint Laurent since his appointment to the role previously held by Hedi Slimane. On Wednesday, Bouchra Jarrar will show her first collection for Lanvin, almost a year after Alber Elbaz was ousted from the 129-year-old fashion house. Meanwhile, Pierpaolo Piccioli and Maria Grazia Chiuri will be showing their first solo collections this fashion week, ending a 25-year creative partnership, after Dior announced in July that Chiuri would be its new creative director, leaving Piccioli to hold the reins at Valentino on his own.

Expectations are high. All four designers have tough acts to follow. Under Slimane, Saint Laurent sales revenues more than doubled in just three years. The designer’s savvy reworking of the aesthetic codes of musical sub-cultures was a consistent commercial success, despite its mixed critical reception. While at Lanvin, during Elbaz’s 14-year tenure, the brand expanded from just 15 stockists to over 400 worldwide and estimated revenues of 250 million euros ($321 million). At Valentino, Pierpaolo Piccioli and Maria Grazia Chiuri expanded the accessories offering of the house, most notably with the hugely successful Rockstud line, driving global growth and pushing revenues to exceed the $1 billion mark for the first time in 2015. At Dior, Simons’ intellectual, modernist designs were a hit with customers. Last year Christian Dior Couture chief executive officer Sidney Toledano told French newspaper Les Echos that he had seen a 60 percent growth in revenues since 2011.

As these Paris Fashion Week powerhouses recalibrate, BoF breaks down the commercial and creative challenges ahead, and the opportunities among them.

Belgian-born Vaccarello certainly brings very different experience to the Saint Laurent role than Slimane, observes fashion journalist Angelo Flaccavento. “I think he is stepping into very difficult shoes,” he says. “Anthony is a very good designer, but he is a designer, while Hedi has always been more of a curator of a whole world. He created a whole mystique around Saint Laurent. [In Vaccarello] we have a designer who makes clothes, but is not particularly groundbreaking. He has a good take on femininity in a dry French way, but it's something we've seen already. Anthony needs to find an aspect to keep the charm around the label.”

Saint Laurent does not require another re-launch since the label is still enjoying the momentum created by Slimane, says Mario Ortelli, a senior luxury goods analyst at Sanford C. Bernstein. “[Vaccarello’s] task is very different to the one that Alessandro Michele had [at Gucci]. Alessandro had to turn round a brand that was fading, that was not so fashionable and not so relevant anymore. And to me, this is a different situation … [Vaccarello] does not have pressure to bring results. The goodwill built up by Hedi Slimane will continue for some quarters.”

I think [Saint Laurent] has product strategy mix and positioning so right, it would be mad to tinker with that. I would be surprised if they did.

That goodwill has ensured continued healthy sales for Saint Laurent. In the first quarter of 2016, sales were up 26.5 percent year on year on a constant exchange basis, hitting €269.3 million (about $303 million) and making it the star performer in parent company Kering’s luxury portfolio.

“I think more and more we [are seeing an] alliance to the creative directors versus the house,” observes fashion retail consultant Julie Gilhart. “[However], established brand names carry a lot of weight and can survive quite nicely if the product continues to be good and consistent.” 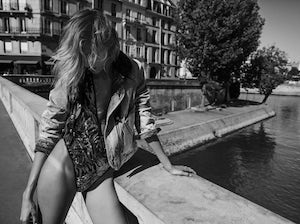 “My bet is on continuity not revolution,” predicts Caroline Issa, chief executive officer and fashion director of Tank magazine. “I think [Saint Laurent] has its product strategy mix and positioning so right, it would be mad to tinker with that. I would be surprised if they did.”

Vaccarello’s eponymous label — which is currently on hold while the designer focuses on Saint Laurent — has its own army of fans, thanks to his uber-sexy, slit-beyond-the-thigh evening gowns. And teaser images of his upcoming Saint Laurent debut collection starring Vaccarello's favourite model Anja Rubik proved that his hipbone-baring cuts aren’t going anywhere.

“If you look at the first images they sent out as a teaser with Anja Rubik, [the aesthetic] is a bit more racy,” says Flaccavento. “Of course he can add a bit more sexiness. If sex sells, then he can succeed for me.”

A different challenge lies ahead for Bouchra Jarrar.

Lanvin’s once-rapid growth has slowed, despite the former creative director’s popular personal brand and critically respected designs. Disagreements between the label’s owner, Shaw-Lan Wang and Elbaz, who was accused of “a lack of creative designs,” resulted in the designer’s exit after 14 years in October 2015.

While Jarrar is without doubt a talented couturier, the question surrounding her appointment is whether she will be able to forge a connection with the Lanvin customer. Lanvin has been in need of a new signature, argues Flaccavento, and Jarrar could be the perfect designer to bring that to the house. “Lanvin was almost stuck in a loop, so this is a good moment to change some things,” he says.

“Alber is undeniably a tough act to follow,” says Issa. “That is without doubt the biggest hurdle in front of Bouchra. That personal connection that Alber fostered between the brand and the audiences was deep.”

“Alber Elbaz was able to create a signature for Lanvin that wasn't here before and built a massive business on it,” says Gilhart. “With any new designer coming to a house, the challenge will be re-establishing a signature.”

I think Bouchra will find her own formula, she is too smart to try to follow Alber’s path, she will surge her own.

Like Vaccarello, Jarrar must tread a fine line at Lanvin, respecting the house’s heritage and Elbaz’s legacy while delivering something original.

“It seems a good fit, but if I have to put designers into two categories, Alber Elbaz is a warm designer and Bouchra is a cold designer,” observes Flaccavento. “I like what [Jarrar] does, but sometimes she is a bit carried away by the perfection of a cut or the drape. I always like her shows but [they don’t] move you or touch a chord.”

“You cannot throw away all of the past,” says Ortelli. “You have to use the key elements of the style, but then be different. If you copy, it is very difficult to have legitimacy in the press if it is perceived as a copy. When Alber left, revenues went down, so it is really important to regain back the trust of the consumer.”

“I think Bouchra will find her own formula, she is too smart to try to follow Alber’s path, she will surge her own,” says Issa. “They share a tough modernity along with a soulful kind of femininity, I think she will move on the aesthetic but in a really exciting way… A woman in charge of an essentially feminine brand and such an intelligent and capable one at that. Bouchra has incredible hinterland as a designer and I think we are in for a real treat.”

As the first female creative director at Dior, a house with inherently feminine codes, Chiuri’s appointment has been greeted with excitement and anticipation.

“I believe being a woman at Dior is a great advantage and will talk to the customer in a very succinct way,” says Gilhart.

“To me it's very exciting, first of all because she’s a woman,” echoes Flaccavento. “I personally am a fan of Raf Simons, but I have never been a fan of what he's done at Dior, very cold. So I think she can bring some softening and some charm back.”

“I think it will be more feminine more beautiful and more embellished,” says Caroline Issa. “The house has such a strong and everlasting silhouette, she should thrive working with that DNA. Then there are the archives — that must be an incredible opportunity and challenge. Balancing the weight of history with freedom to imagine it anew.”

Chiuri’s appointment is significant for the wider industry too, adds Issa. “It's huge. We know that women creative directors are a rarity in our business, and [Chiuri’s new role is] at such an illustrious house and at such a great and global business. I very much hope she represents a trend. How amazing would that be?”

For Valentino, Piccioli is not a new designer, but as one half of a very successful design duo, it will be interesting to see what he delivers as a solo creative director. Having been at the house for 17 years, Valentino has the advantage that Piccioli knows his consumer intimately, though insiders whisper that Chiuri was the designer responsible for the aspects of the Valentino brand that best resonated with consumers, thanks to her decorative eye, while Piccioli was more focused on silhouette. To start the next creative chapter at a house whose aesthetic he built, Piccioli will have to strike a balance between pleasing that existing consumer, while taking the opportunity to inject some fresh ideas into the house’s codes.

A new designer responsibility is the perfect chance to inject new ideas into the brands.

“The reality is Pierpaolo will not alienate customers if the clothes and accessories being produced continue to be good,” says Gilhart. “A customer is loyal to a designer but more loyal to the clothes. Valentino has a solid brand identity.”

But more of the same formula could present a “Bottega Veneta moment,” observes Luca Solca. “Their major theme, studs, has played out very successfully, the same way as [Bottega’s famous woven leather] Intrecciato,” he says. “A new designer responsibility is the perfect chance to inject new ideas into the brands.”

Piccioli must tread carefully when it comes to new ideas though, warns Flaccavento. “He is the one with the trickiest position, because Valentino is doing well,” he says. “He cannot alienate the clientele and he can't change sporadically, because he was involved in the creative process already but he needs to tweak it.”

If Piccioli can strike the right balance between the old and the new, Flaccavento believes Piccioli’s interests in street culture and the arts indicate a new creative direction for Valentino.

“I think he can bring an artier side to Valentino,” he says.

Editor’s Note: This article was revised on 2nd October, 2016. An earlier version of this article misstated that house of Lanvin was 187 years old. It is in fact 129 years old.

The Secret of Saint Laurent's Success

Alber Elbaz: "I Hope that Lanvin Finds the Business Vision it Needs" 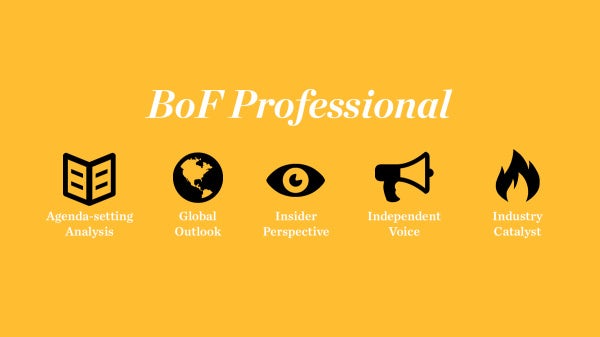