LONDON, United Kingdom — “Today, people want kidswear to be fun and trendy. People are very conscious of how they want their children to look,” says Ellen Kirkhope, kidswear director at trend forecasting agency WGSN. Indeed, consumers have become more likely to make childrenswear purchases based on fashion, rather than practicality, sparking a creative revolution in the growing childrenswear market.

The global childrenswear market racked up sales of €135.6 billion in 2015, up from €122.1 billion in 2010, according to Euromonitor, creating commercial opportunity for new brands. “There is a huge increase in the supply of brands and labels that are actually manufacturing kids’ clothes. I’ve been working in childrenswear since late 1997 and at that point I probably only dealt with 60 labels. Now I see 600,” says Linda McLean, former fashion director of Junior magazine, who now blogs under the name Smudgetikka.

“What is important to touch upon is how complex the childrenswear market has become,” says Kirkhope of the highly-fragmented childrenswear market, in which no brand holds more than a 3 percent market share. While many kidswear brands operate through licensing agreements, “The rise of the supermarket clothing lines in the UK and the US has influenced brands like H&M to up their game because convenience is no longer enough… the fashion element of fast fashion is much more important,” she continues. 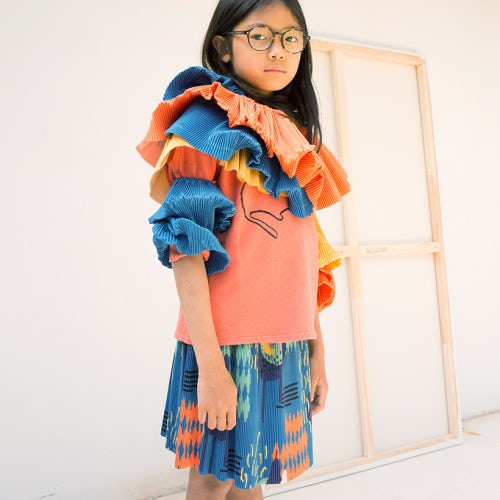 “Over the last decade, independent companies have forced older and bigger companies to look anew because they were challenging them, and they were losing sales. To survive in the market, they have had to adapt and make their offering much more fashionable,” adds McLean.

While the creative direction of men’s and women’s fashion continues to be anchored by the four fashion capitals of London, New York, Paris and Milan, some of the most influential brands in the childrenswear market hail from Spain and Belgium.

“We’ve been watching a lot of Spanish brands,” says Allison Goodfellow-Ash, kidswear editor at WGSN. “Although the Spanish economy is bad, its aesthetic and look is spreading. If you look at stockists for top Spanish brands, they have a global presence.”

“We are in approximately 400 stores,” says Adriana Esperalba Esquerra, co-founder and chief executive officer of Spanish childrenswear label Bobo Choses, which launched in 2008 as a sustainable t-shirt line and has since expanded into a full childrenswear offering, and is now offering adult sizes of its clothing.

Belgian kidswear designers Caroline Bosmans and Anne Kurris (the latter of whom formerly designed graphics at Dries Van Noten kidswear), have taken a more directional creative approach to kidswear with their eponymous brands. Bossman launched her label to offer an “avant-garde ambiance” she felt “was something missing in the kids market. I try to transform things that cross my way, or more ‘adult themes', into kidswear,” she explains. 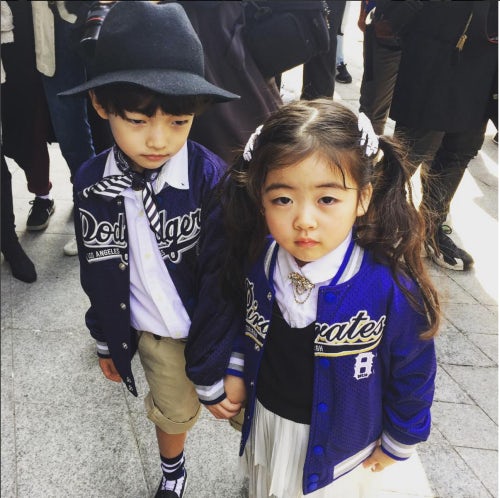 Japan and Korea, markets where children’s street style is popular, are also asserting their presence on the global stage, with Japanese brands like Fafa and East End Highlanders reworking high-quality, functional fashion for kids. Japanese brands' appeal is “the aesthetic, and their quality is good too. They’re good at denim as well,” says Kirkhope, noting that Korean brands focus on romantic florals as well as layered, colourful Japanese styles.

As brands compete for consumer awareness online, product that stands out on an Instagram feed, as well as a rail of clothes, is vital. Both Bossman and Kurris “have been immensely popular on Instagram with bloggers,” says McLean, thanks to their garments’ creative graphics and unusual cuts. “It tends to be strong handwriting that gets people’s attention, and once that’s out, those are the brands influencing the high street,” she continues. 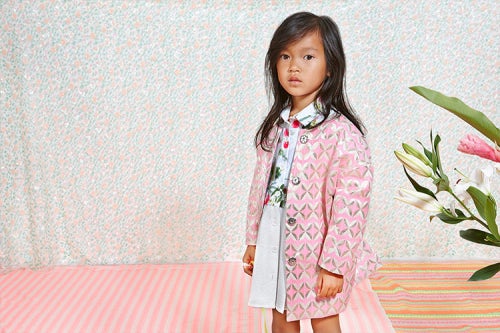 Instagram influencers have also taken off in the space, like Courtney Adamo (176,000 followers) and Julia Restoin Roitfeld (255,000 followers), the daughter of Carine Roitfeld and founder of childrenswear brand Romy and the Bunnies. “There’s a tagline: ‘women who happen to be mothers’ appearing online in lifestyle blogs, across fashion, interiors and food,” says Kirkhope, who cites Grey Label in the UK and OuefNYC in the US as brands with strong digital universes. By creating “whole lifestyles” online, “These mum influencers are doing well at creating worlds that have a certain aesthetic with brands that feed into it,” she says.

Like the overall fashion market, in recent years the childrenswear market has polarised, benefiting luxury and low cost players, and leaving mid-tier brands in the cold.

Traditional luxury independent brands like France’s Bon Point, Italy’s Mimisol and the UK's Caramel and Baby have flourished in emerging markets including China and the UAE, where luxury gift giving and formal aesthetics chime with local consumer preferences. Asia Pacific’s childrenswear market was worth €44.1 billion last year, and is projected to reach €65.1 billion by 2020. However, these brands are also adding more casual styles to their offerings and diversifying their product ranges, as in Western markets “There’s less of a need for formal childrenswear,” says Kirkhope. 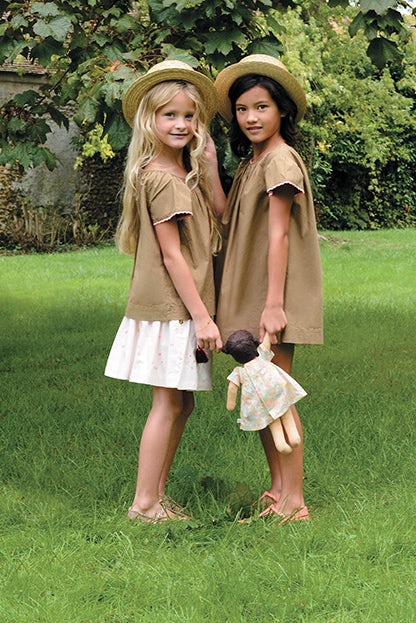 Bonpoint is developing skincare, a teenage clothing line and couture for kids. “We’re going to concentrate on these poles, but I’m always open to the idea of developing other lines of business. We could imagine doing homewares products or interior décor for children,” Hugues de la Chevasnerie, chief executive of Bonpoint told BoF.

With the exception of Christian Dior, which launched Baby Dior in 1967, European luxury houses have been late to the childrenswear market. After launching kids’ lines in the 1990s, brands including Dolce and Gabbana, Fendi and Gucci now produce their childrenswear in-house. “Licenses tend to be slightly cheaper, they are still quite funky and fashionable and have ‘mini-me’ within the collection, but the majority of the collection is geared quite commercially, like slogan tees,” says McLean. Indeed, designer childrenswear collections often feature ‘mini-me’ versions of a brand’s women’s and men’s clothing — such as Balmain, whose kids’ collection of scaled-down leather biker jackets and lamé trousers launched earlier this year.

At Dior’s new maison on London’s New Bond Street, within the store complex, an entire townhouse is dedicated to Baby Dior. “This architecture highlights the fact that Baby Dior is a universe in itself at Dior and allows children to feel at home in an intimate space,” says Cordelia de Castellane, creative director of Christian Dior childrenswear.

In addition to gift-friendly products like Baby Dior baby booties, Dior produces ten-piece "Exclusive Collections" made by its savoir faire ateliers, with garments priced in the thousands of dollars. “We are the only couture house to offer children’s lines. Since my arrival I have placed an accent on these exceptional pieces,” continues de Castellane.

Runway trends like unisex garments are picking up momentum in kidswear, as brands opt to de-princess and de-soldier their girls and boys lines. “Initially, genderless dressing had a political slant — people not wanting to dress their kids in pink, for instance. But we’re past that now and brands like Mainio and Bobo Choses are going the right way in creating these genderless but fun clothes,” says Goodfellow-Ash.

The popularity of sportswear and casual styles like Bobo Choses’ jersey twin sets have also helped paved the way for more gender-neutral product. “The print and graphic style defined the garment, not the gender and it was comfortable for kids, why would you not buy into that?” says Kirkhope.

Childrenswear is also mirroring a movement in the wider fashion market for sustainable, slow fashion products. “Swedish brand Mini Rodini have really moved sustainability on — [they do] their deliveries by bike where they can,” says Goodfellow-Ash.

For independent brands like Barcelona-based Little Creative Factory and Helsinki-based Mainio, sustainability is a point of differentiation that helps them compete with low-cost, fast-fashion competitors — in terms of sales, the biggest brands are behmoths like Uniqlo, Adidas, H&M and Zara. “There are more and more stores every year who want to sell brands that breath this philosophy and want to offer original products that are both beautiful, of high quality and sustainable,” says Adriana Esperalba Esquerra of Bobo Choses.

To coincide with the 83 Edition of Pitti Bimbo (Thursday 23rd - Saturday 25th June, 2016), The Business of Fashion presents a Special Report on the Childrenswear Market, sponsored by Pitti Immagine. Look out for in depth market analysis and global coverage of the brands and the retailers innovating in the childrenswear space each day of the fair.