The independent style title — whose covers are more likely to feature authors than fashion models — is growing its club, which meets for sponsored events ranging from architectural tours to cards nights.

The independent style title — whose covers are more likely to feature authors than fashion models — is growing its club, which meets for sponsored events ranging from architectural tours to cards nights.

LONDON, United Kingdom — On a typically temperamental Wednesday morning in London, a well-heeled crowd has gathered at the Cos store in Spitalfields Market in the East End of the city. They have come as members of The Gentlewoman Club, a loosely-knit community composed of readers of The Gentlewoman, an independent style title whose covers are more likely to feature authors than fashion models.

Unlike the reader events typically staged by fashion magazines, this isn’t a shopping or styling session. Rather, this group of about 45 women and a few men are set to embark on a full-blown architectural tour of London’s most famous brutalist landmarks and modernist social housing estates, finishing with lunch at the Isokon building, a white concrete block designed by architect Wells Coates.

Gentlewoman’s editor-in-chief Penny Martin is here to welcome club members in person. Umbrellas, binoculars, earpieces and packed breakfasts are handed out in specially-designed tote bags. Inside, there’s also the sixteenth issue of The Gentlewoman, which features Olympic gymnast Simone Biles on the cover and has yet to hit newsstands. Cos is sponsoring the event and for anyone interested in shopping, there’s the chance to browse the rails before the group sets off on a 1965 Routemaster RM2217, once one of London’s distinctive red double-decker buses. 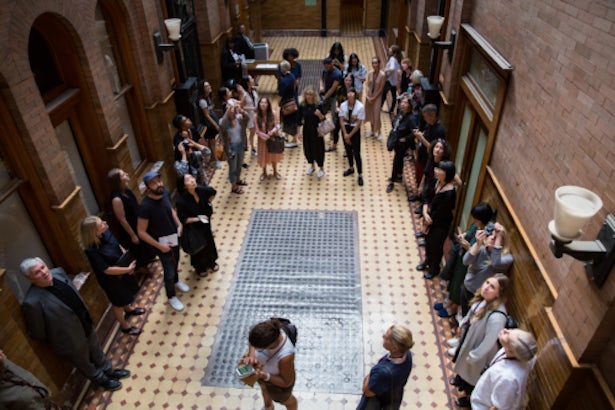 The Gentlewoman, the sister magazine to Fantastic Man, is published by the Dutch duo Gert Jonkers and Jop van Bennekom. Launched in 2010, the glossy now has a circulation of just under 100,000. In a media landscape saturated with glossy magazines, The Gentlewoman has cut through the clutter with an intelligent take on fashion and culture aimed at smart and tasteful women much like Martin herself, who was previously a curator at the Women’s Library and the National Media Museum, as well the first editor of Nick Knight’s fashion website SHOWstudio and chair of fashion imagery at London College of Fashion. The magazine has ascended in tandem with Céline (in fact, designer Phoebe Philo was the magazine’s first ever cover star) and the title’s design — by Veronica Ditting — is known for its clean layout, chic fonts (Futura, Garamond, Lyon, Avenir and Georgia) and variations of paper.

In the current issue, alongside profiles on Biles and designers Laura and Kate Mulleavy and Martine Rose, are pieces on less fashionable but equally compelling figures like Marcie Mayer, who transforms Cycladean acorns into food and has built a sustainable business model in the process, and Laura Watson and Sarah Walker, heads of the English Collective of Prostitutes. Previously, the magazine has featured A-list cover stars like Adele and Beyoncé, who is said to have appeared in the magazine in support of its history of featuring strong women.

The Gentlewoman has cut through the clutter with an intelligent take on fashion and culture.

Tellingly, The Gentlewoman has dispensed with traditional shopping pages; it is more concerned with the sartorial fascination with the nuances of dressing than macro fashion trends and repetitive narratives. In the current issue, a fashion story on boots is shot close-up on the escalators in London’s subway system and a piece on denim is photographed on models withdrawing cash from ATM machines. One fashion editorial, photographed by Harley Weir and styled by Jane How, is entirely styled with clothes sourced from charity shops below the $57 mark.

While many magazines are extending their brands into events for which readers must often buy expensive tickets, The Gentlewoman Club is free to those who sign up on the magazine’s website and are selected for a slot. Martin, who hosts each event, hand-picks the attendees much like one might curate the guest list for a dinner party. At the architectural tour, there was a mix of fashion industry and media professionals, architecture nerds and women who work in the arts and charity sectors, even one with a newborn baby. “All we ask is that people give us a bit of information about themselves when they sign up,” says Martin. Many of the events are funded by sponsors like Cos. And although the income from these events currently constitutes a small fraction of The Gentlewoman’s total revenue, it is something that Martin and her team say they are keen to grow. 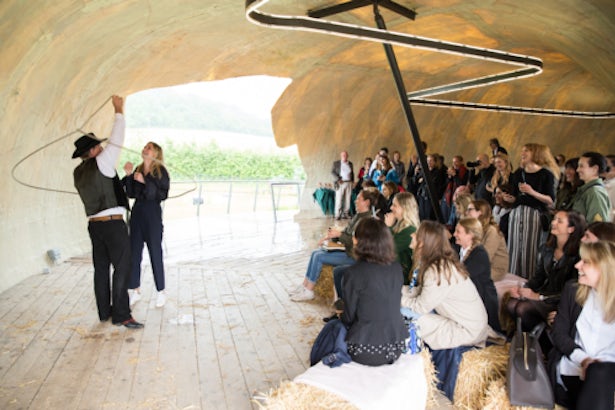 So far, there’s been a get-together at Pasticceria Marchesi in Milan, sponsored by Prada; a cards night at the Savile Club in London’s Mayfair in partnership with Browns Fashion; a day-trip to Durslade Farm for 50 people with Paul Smith; a Sonia Rykiel book club; a ghost-story walking tour supported by Sunspel; and a guided tour of Louis Vuitton’s Es Devlin-designed exhibition at London’s 180 The Strand. But perhaps the most ambitious events so far have been the club’s architectural tours in London and Los Angeles, in partnership with Cos and led by Joe Kerr, a lecturer at Hereford College of Arts and former tutor of Martin’s at the Royal College of Art. (In London, the emphasis on social housing had a political bent, in light of Grenfell Tower, a public housing block in the city’s Notting Hill district that caught fire in June, killing at least 80 people.)

Martin says the club grew organically out of the gatherings the magazine used to host at independent bookshops to launch its latest issues. “We were really struck by the kinds of people that attended: designers, gallerists, collectors, switched-on students, smart businesswomen,” recalls Martin. “But what we noticed when we started increasing activities was not just who, but how people were attending: by and large, they arrived alone, with the expectation of meeting other people, so the atmosphere was really friendly and people stayed.”

There are now over 28,000 club members from around the world, 15 percent of who are men. “Clearly, these bigger events are possible with the support of advertisers that appreciate that while the activities themselves may be modest in scale, [can] see the value of supporting such a blue-chip experience and communicating the personal — dare I use the word authentic — qualities of such an imaginative event,” says Martin.

It’s very important that the readers feel part of something sincere and consistent.

"The Gentlewoman has an extremely engaged readership that sees design as a lifestyle, just as we do,” says Atul Pathak, Cos' head of communications. "They passionately want to educate their readership and it is always a pleasure to be able to share the Cos inspirations with others."

Martin also hosts smaller club events without sponsorship, such as a Bring Your Own Vinyl night at a dive bar in London’s Denmark Street or a magic show at Shakespeare & Co, the English-language bookshop on the Left Bank of Paris. "I think it would be a pity were they to feel that what started as something very genuine were to turn into something very commercial so we try to balance the more ambitious, supported projects with the modest ones," she says. "For us, it’s very important that the readers feel part of something sincere and consistent with the kind of conversational, friendly tone of the magazine, which is why we’re not charging for them."

The events are also valuable as generators of digital content. "I’d love to say I planned it, but it was just sheer luck that the club began to generate online assets that the magazine can use to engage readers between its bi-annual issues."

"It’s not daily content by any manner of means but it strikes a tone on our social media accounts that’s akin to the whole ‘arch-women’s society’ atmosphere of the magazine."