As key global markets continue to cool, business growth in the luxury sector will be hard won in 2016. But, here are three levers that fashion’s luxury megabrands can employ to drive growth. 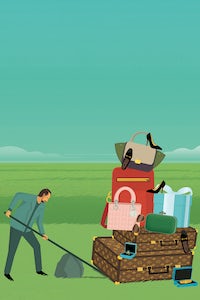 As key global markets continue to cool, business growth in the luxury sector will be hard won in 2016. But, here are three levers that fashion’s luxury megabrands can employ to drive growth.

LONDON, United Kingdom — Fashion and luxury brands can no longer count on rapid expansion in China for automatic revenue and profit growth. The weak dollar and explosion of Chinese consumer spending that, together, drove easy double-digit growth for much of the last decade are no more, with the global market for personal luxury goods eking out only one to two percentage points of growth in real terms in 2015, according to consulting firm Bain & Company.

The situation is particularly tough for fashion’s luxury megabrands — like Burberry, Gucci and Louis Vuitton — which, in recent years, have overexpanded their retail networks and can no longer depend on simply opening new stores to drive growth. This is especially true in Greater China, where many luxury mega-brands have built sprawling retail portfolios that are no longer economically sustainable.

Consumption in Mainland China shrunk by 2 percent in real terms in 2015, a result of Chairman Xi Jinping’s continuing crackdown on corruption and consumer concerns over the stability of the Chinese stockmarket, which on 24 August 2015 — known regionally as “Black Monday” — experienced the biggest one-day fall since 2007. But this was only one of several recent shocks. Trading on the Chinese stockmarket was suspended 14 minutes after the opening bell on 7 January 2016 after a rampant sell-off that caused the CSI 300 (Chinese Stock Index) to fall by 5 percent. One minute after trading resumed, it was suspended again after the index fell a further 2 percent, closing the market for the day.

Meanwhile, in Macau and Hong Kong, where luxury retail sales contracted by more than 10 percent in 2015, brands are consolidating and re-balancing their portfolios, while renegotiating rents with landlords.

Post-recovery America, which emerged from the global financial crisis and ensuing downturn much faster and stronger than most, does not offer much hope for luxury growth either. Since 2014, the US dollar has appreciated by more than 20 percent against a basket of key global currencies, hampering touristic flows from abroad and driving Americans to buy in Europe. So, while Americans are shopping again, they prefer to shop abroad, where they can find better deals. Tax-free shopping by Americans in Europe was up 67 percent in 2015. This is not likely to change as market analysts expect the dollar to further appreciate in 2016.

Consumption in other major economies is cooling. In particular, Russian luxury consumers have all but disappeared from the international market. With the collapse in oil prices and the imposition of international sanctions following the country’s incursion into Ukraine, the Russian luxury market shrunk by 25 percent in 2015. Tax-free shopping by Russians in Europe has contracted by almost 50 percent in the last two years.

A full-on political crisis under President Dilma Rousseff in Brazil, now in one of its longest recessions in decades, has stalled the economy there too. Meanwhile, in India, the world’s fastest-growing major economy today and often ballyhooed as the “next China,” the market is still riddled with inefficiencies, punitive import taxes and slow-improving infrastructure, making it a difficult place for luxury brands to do business.

With such grim global growth prospects, ambitious luxury companies will need to work hard for growth in 2016 — and compete with each other to capture market share. Where should they focus their attention?

Chinese citizens made over 100 million trips overseas in 2014. In the first half of 2015, this number grew by 10 percent and could reach 200 million trips by 2020. Thus, while consumption at home may be flatlining, Chinese consumers will continue to drive almost a third of global luxury sales volume in 2016, with 80 percent of their spending taking place abroad.

Luxury shopping at airports — where the spending grew 18 percent in real terms in 2015 — now accounts for 6 percent of the total luxury market, up from just 4 percent in 2015, according to Bain. “Overall spending [by Chinese consumers] is growing in double digits in real terms,” says Bain’s Claudia D’Arpizio. “Even though brands are struggling to understand this complex picture with currency fluctuations and everything else changing the luxury shopping map, the big picture overall is that the market is still increasing,” concludes D’Arpizio.

“While there’s very bad performance in Hong Kong and Macau, there are nice tourist flows to Taiwan from the Mainland. Japan is the most important destination for Chinese shoppers right now,” she adds. In addition, other traditional travel-retail corridors for Chinese consumers — Western Europe and Australia, among others — will remain crucial revenue drivers, especially as local currencies have weakened.

“There is a relentless appetite for travelling and shopping while travelling. That has not changed,” agrees Philippe Schaus, chairman and chief executive of DFS, an LVMH-owned travel luxury retailer with duty-free stores in 18 airports around the world and city-centre shopping in 11 cities through its Galleria store network, which, together, reach 35 million travellers a year according to the company. “There is an inherent appetite for luxury and then you have currency effects and other effects that mean that people are shifting the location where they buy and what they buy.”

Due to the continuing crackdown on corruption in China, much of this growth is now coming from consumers buying for themselves, creating radical differences in consumption preferences and behaviours. What’s more, “You have an enormous difference between generations,” observes Schaus. “You see how radically different they are between the age strands. Forty-year-olds have a different perception of luxury compared to 30-year-olds, and 20-year-olds have another one.”

This means creating a broad offering in travel retail that appeals to consumers across generations. “Our objective is not to limit our audience, but to broaden it,” says Schaus. Luxury brands would be wise to follow suit.

Today, a significant share of this market is being captured by pure-play e-tailers like Yoox and Net-a-Porter, which together pioneered luxury e-commerce and merged their businesses in 2015, creating an e-commerce juggernaut driving more than €1.3 billion in revenue. But luxury brands that are paying attention to the segment — such as Burberry, Ralph Lauren and Saint Laurent — are outperforming the market and have inherent advantages over the e-tailers because they can capture a full retail margin and offer additional services and experiences through their existing bricks-and-mortar store networks.

Indeed, nearly three-quarters of luxury goods buying decisions are influenced by what consumers hear or see online, on brand sites and beyond. Better digital engagement of consumers is an effective way of increasing consumer spend — and not just online. Cross-channel clients spend on average more than 60 percent more than in-store-only clients and have increased the portion of their luxury spend online every year from 30 percent in 2011 to 37 percent in 2014, according to Exane BNP Paribas.

The opportunity for a longer-term digital upside is especially apparent in China, says D’Arpizio. “E-commerce and mobile commerce are a huge opportunity [in China], but it’s still ‘wait and see’ mode as they better manage counterfeiting and other issues. This channel could be leveraged to penetrate the market in a better way. After 10 years, it is important to take a clear position in a channel like this with double-digit growth worldwide as there is stagnation elsewhere.”

At times of limited organic growth, mergers and acquisitions may also be tempting, especially for publicly-traded companies like LVMH, Kering and Richemont, which must consistently satisfy shareholder expectations for quarterly growth.

Indeed, luxury’s biggest conglomerates have accumulated huge reserves of cash, which their shareholders expect to be utilised as stimulus for further growth. According to Mario Ortelli, senior analyst at Sanford C. Bernstein, Richemont and LVMH are each in a position to make an acquisition of over €10 billion; Swatch and Hermès of €5 billion; and Prada, Burberry and Kering of €3 billion or less. “We do not expect Prada or Burberry to make substantial acquisitions,” he says. “Hermès could decide to use part of its cash for M&A rather than distributing dividends.”

Smaller businesses with global potential but insufficient funding are key targets for acquisition, something Solca believes will become more pronounced in 2016 and beyond. “Typically, we have seen consolidation most frequently when the going is strong. Going forward this is not going to be the case — it’s going to be driven more by the market getting more complicated and more difficult. You can argue that the advent of digital is making the business much more complex, prompting smaller players to sell.”

Many potential acquisition targets are based in the relatively fragmented Italian market, where family-owned companies abound. “If the Ferragamo family decides to sell the company, for sure it’s of great interest for the luxury groups from a strategic point of view, because you’ve got a brand with a lot of varied product categories, with a respectful, good footprint, that a group can extract synergies [from]. Mr Armani was vocal to say ‘Until I am out of this world, the company is not for sale,’ but Dolce & Gabbana were not so vocal on this point. And then you’ve got other privately-owned companies, from Zegna to Missoni,” says Ortelli.

However, Solca cautions, “I think this M&A angle will be used more prudently by groups, all in all. You can make big mistakes and you can lose money.” With growth rates projected at just a quarter of the not-so-distant boom years, for vast and exposed businesses, either could be fatal.