The Renegade Eyewear Brand Breaking All the Rules

Despite avoiding advertising, influencers and discount deals, British direct-to-consumer eyewear brand Cubitts has opened seven stores in five years and is in it for the long haul.

The Renegade Eyewear Brand Breaking All the Rules

Despite avoiding advertising, influencers and discount deals, British direct-to-consumer eyewear brand Cubitts has opened seven stores in five years and is in it for the long haul.

LONDON, United Kingdom — It may seem odd that a five-year-old spectacle brand is hosting an exhibition exploring six hundred years’ worth of eyewear history. Yet direct-to-consumer eyewear brand Cubitts and its founder Tom Broughton are up to the task.

The showcase — titled "Retrospective: London, Spectacles and Half and Millenia" — opens in the city’s St James’s Market on November 22. For the next three months, visitors may peer through glass at a timeline of bygone and modern eyewear icons, from a wooden pair of Inuit snow goggles to Audrey Hepburn’s timeless tortoiseshell cat-eyes from Breakfast at Tiffany’s.

One of the last displays features "A Frame for London," a pair crafted by Cubitts from materials fished out of the River Thames. Tudor hair pins, a WWII bullet, and a shard of a Bellarmine glazed ceramic are immortalised in chunky clear resin. Like the eccentric ode to the city, Cubitts’ brand is bound to the history of London, from its name and logo to glasses inspired by the city’s squares, gardens and mews, and the brand still makes all of its frames in the city.

“It makes no commercial sense to craft a pair of frames out of 600 years of London’s detritus,” Broughton tells BoF as his team adds finishing touches to the exhibition. Yet renegade business decisions seem to work in Broughton’s favour. 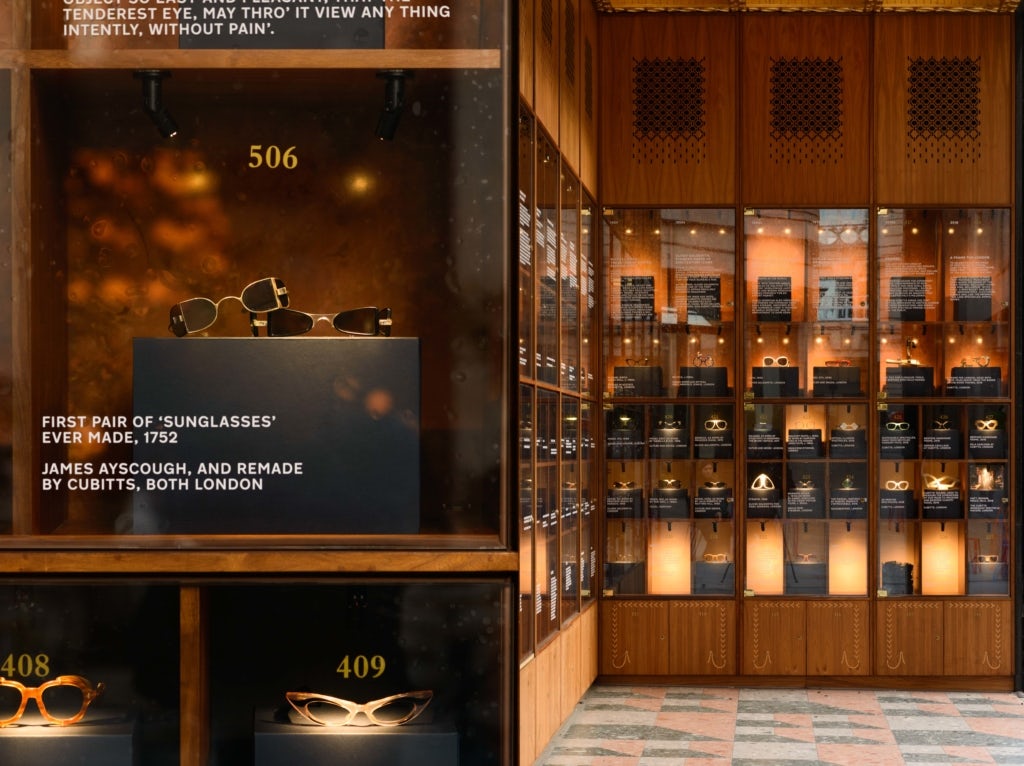 His company’s impressive growth is evidence that Cubitts has one foot in the past, and another very much in the future. Five years after Broughton crafted his first pair of frames on his kitchen table in King’s Cross, the business has come full circle: Cubitts' bespoke and limited runs are still made in the area, which is also home to its seventh physical store in the buzzy Coal Drops Yard. This year, Cubitts has brought in £5 million ($6.49 million) in sales from direct-to-consumer channels and saw its revenues grow by 69 percent in 2017, according to figures provided by the brand.

Cubitts isn’t the only brand making waves in the eyewear market, which according to Research and Markets is set to be worth $177.8 billion by 2023, and has long been monopolised by the likes of designer-licensees Luxottica, Marcolin and Safilo, the giants behind Ray-Ban, Chanel, Prada, Dior and Fendi’s optical offerings.

According to Karolina Zlotkovska, a fashion and beauty analyst at Euromonitor, two sources of disruption are luxury brands taking back control of their eyewear operations — which LVMH and Kering began doing in April 2018 and September 2014 respectively — and incumbent licensees acquiring direct-to-consumer brands. “The growing presence of independent players ultimately makes them potential targets for licensees to further expand their portfolios,” Zlotkovska tells BoF.

Growing fast is quite easy really, and the world is littered with companies that grew fast and collapsed.

However small they may be in the bigger picture, direct-to-consumer brands like Cubitts are making an impact. According to Mario Ortelli, managing partner of luxury advisors Ortelli & Co, it is imperative for “established companies to invest seriously in taking their brands direct-to-consumer and extend their share of the market,” noting that Luxottica is doing so already with brands such as Ray-Ban. “They’ve realised that direct-to-consumer isn’t the future, but the present of eyewear. For a company not to invest in this segment would be very short-sighted of them.”

Independently-owned brands such as Cutler and Gross, Illesteva, Moscot and Linda Farrow have found success on both direct and wholesale channels by pairing unique designs with premium craftsmanship. But since Warby Parker pioneered its direct-to-consumer eyewear model in 2010, the market has become an increasingly crowded place with new players keen to disrupt it.

Take Gentle Monster, which expects to hit $200 million in revenues by the end of 2018, according to its UK managing director Gary Bott. Known for artistic installations in its 20 flagships worldwide and buzzy celebrity collaborations, the Seoul-based brand founded in 2011 by Hankook Kim is exploring other product categories through partnerships, from an eyewear and raincoat collaboration with Chinese designer Xander Zhou to a “music and visual album” featuring Kanye West and Pharrell, which will be released in January 2019.

Another Cubitts competitor is Parisian eyewear brand Jimmy Fairly, which releases 15 to 20 new eyewear styles per month. With 29 locations under its belt, the brand is slated to open 35 more in 2019. “We want to become the European leader for high fashion eyewear in 5 years’ time,” its co-founder and president Antonin Chartier tells BoF. 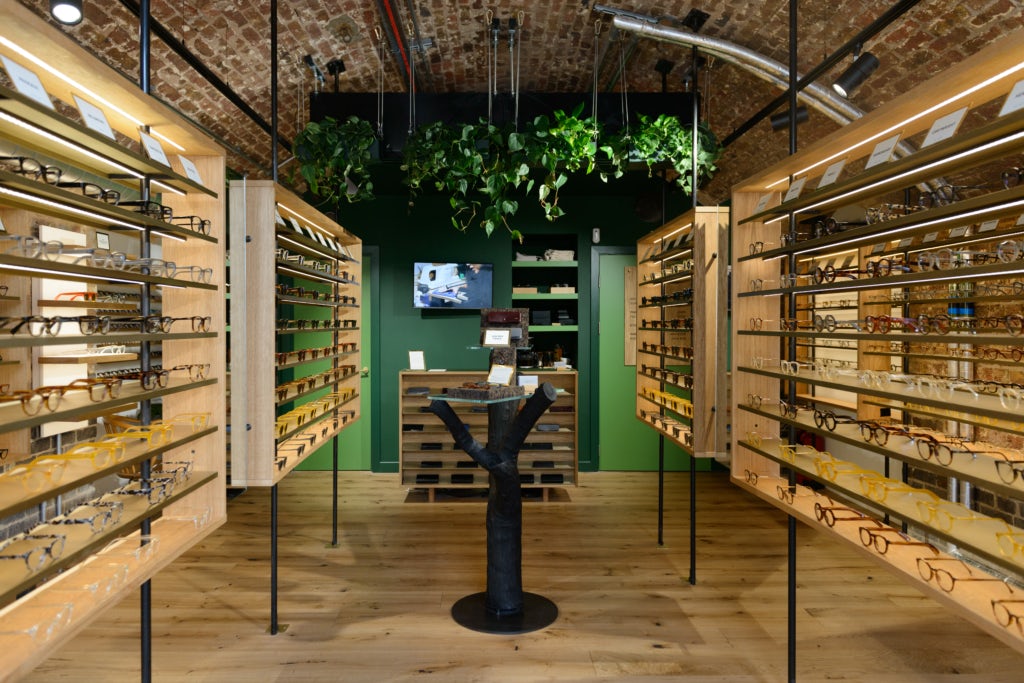 Yet, unlike its direct-to-consumer competitors, Cubitts doesn’t focus on scale-driven milestones — be it the number of stores opened or styles on shelves. “We release a new product every month, but retire an old one,” says Broughton, who also serves as chief executive. This quality-over-quantity mindset rules Cubitts’ range of frames as well as its approach to growth — paradoxically, much of the brand’s success has stemmed from prioritising its carefully curated brand identity and customers over growth and disruption.

“Growing fast is quite easy really, and the world is littered with companies that grew fast and collapsed,” says Broughton. Though Cubitts has five stockists including Liberty and Mr Porter, Broughton is adamant that he will continue to be very selective in order to keep distribution channels to a minimum. “With wholesale, you lose the endpoint and ability to get feedback, curate an experience and tell a story. We are contacted multiple times a week and could open 500 accounts, but does that grow a better business? I don’t think it does.”

We’ve grown a lot but we’re still tiny. I want us to get strong but not fat.

The new exhibition captures Cubitts’ commitment to storytelling, even if it means including other brands in the narrative. Alongside Cubitts’ own styles, the retrospective’s timeline features established brands such as Anglo American Optical and Cutler and Gross, stalwarts of British eyewear history.

“We’re promoting other eyewear brands because we don’t see them as competition. When you’re doing something so hard and time-consuming, you tend to share the same values.”

Broughton is referring to the offering of an intensely bespoke service, which is integral to his business. An obsession with fine-tuning the customer experience means eye exams at Cubitts’ seven London stores, a mobile virtual try-on feature online and utilising cephalometric technology to create 3D scans of consumers’ skulls for the perfect fit. And, in a move to reduce waste, customers can take their frames to Cubitts stores and have them repaired for free.

Cubitts’ meticulous customer-first mentality is part of a conscious move against rapid growth; the brand has given illustrated customer glasses cloths emblazoned with “the death of capitalism” in lieu of a Black Friday sale. Though the brand is eager to expand into markets such as the US and Japan, Broughton is not in a rush to do so, stating that Cubitts will “definitely open more than one, but [fewer] than six” stores in 2019, citing the brand’s opportunistic streak for lack of certainty. “We’ve grown a lot but we’re still tiny. I want us to get strong but not fat,” he says.

For the same reason, Broughton is adamant that Cubitts will never set up shop in a mall, market through influencers or partake in flash sales or pop-up stores. “Instant gratification can come at the expense of long term growth.” he tells BoF. “I want Cubitts to exist for a hundred years.”