The Results Are In For The Calgary Bag 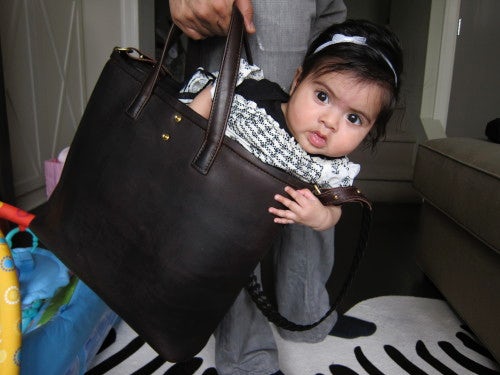 LONDON, United Kingdom – Better late, than never! Over the weekend, some of you may have seen a piece in the Financial Times, where readers from Tokyo, London and New York – two men and one woman – roadtested the Calgary bag, a design and crowdsourcing collaboration I did with British leather designer and craftsman Bill Amberg.

As some of you will recall, the Calgary bag debuted during New York Fashion Week back in February and quickly sparked a debate on Twitter and the blogosphere about the merits of crowdsourcing — outsourcing tasks or problems to the wisdom of a community — in the fashion business. We surveyed the BoF community to gather feedback on three options: brown cowhide, black smooth leather and grey patent leather.

After what has admittedly been a long delay, we are pleased to announce that not only do we have the results of our crowdsourcing experiment, in which over 600 people participated, but also that the most popular bags have been produced in the quantities and colourways suggested by the ‘crowd.’

The feedback was clear. Forty-five percent of respondents preferred the brown version, as pictured above with my adorable new niece Raeya Sofia Popatia. However, there were also significant groups of people who preferred the black version (30 percent) and the grey patent one (25 percent). We also solicited qualitative feedback from readers, which revealed that many men were hesitant about the ‘tote’ shape, a sentiment shared by one of the FT reviewers, Sam Hopkins in London. While he perceived the shape as a touch too feminine for a macho man, the functionality of the bag, with its internal pockets and the ability to stuff all and sundry inside, still won him over.

But while the unisex shape was a turn-off for some of the men who answered our survey, it did open up a whole new market for working women and young mothers, who are always having to cart a lot of stuff around and don’t want to look like they are carrying a “laundry bag,” as Alexandra Lebenthal, another of the FT reviewers put it.

So why the delay in announcing our results? Over the last six months, Bill Amberg and his team have been searching for an external manufacturer to create The Calgary bag at a more accessible price than the bespoke one made in his studio, which cost £950. It took much back-and-forth before they eventually found a factory in Turkey, a country known for its leather goods expertise, that could create a product in line with the quality standards of the Bill Amberg name, but priced at a much more affordable £295, or about $450.

So what does everyone think of crowdsourcing? Several commenters said that designers who solicited feedback on their designs from the public must have no vision of their own. But others enjoyed being part of the process, and saw the value in this kind of consumer engagement. It’s one thing to have a vision. But that doesn’t preclude one’s ability to gather feedback to better understand how products can be improved and to produce the ones that resonate most with consumers.

Around the same time as the debut of the Calgary bag, New York-based designer Derek Lam launched a crowdsourced collection with internet giant eBay, gathering feedback on dress designs from a community of fans, to help determine production quantities of a collection that’s more accessibly priced than Lam’s main line, for which dresses can run at $1000 or more.

Derek Lam also used the crowdsourcing project as a kind of large-scale focus group to learn more about their target consumers. CEO Jan Schlottmann told BoF after the Derek Lam + eBay presentation at New York Fashion Week: “The great thing about eBay is that they are very open to sharing their knowledge. We know that we have a lot of fans out there on the web, not all of them can afford Collection. We do have plans in the future to do something more affordable, so [the Derek Lam + eBay initiative] will give us a lot of insight: what is her lifestyle, where does she live, who else does she shop, what does she like, what are her needs.” Not long after the interview, Derek Lam launched his accessibly priced contemporary label, 10 Crosby.

Schlottman also sees crowdsourcing as a way of eliminating waste that must otherwise be factored into the cost of goods sold. “You include in the cost of good a certain amount of return on products that don’t sell – now you don’t have to do that because you know already what they like,” he explained.

As for Bill Amberg, he too felt there was something for the fashion industry to learn from crowdsourcing, based on our shared experience. “It’s a new and very interesting way to respond to the market," Bill told me as we sat down for some Mexican food to do a post-mortem on our collaborative project. "It’s good to have the hard facts."

Indeed, having some clear data can add a little bit of science into the way fashion products are designed and produced. This doesn't preclude the importance of instinct and emotion in the design and merchandising process, it simply provides another data point to consider in making these decisions.

Finally, I am pleased to announce that Isabel Bradley of Rancho Palos Verdes, California is the recipient of a grey patent leather version of the Calgary bag, as the lucky survey respondent to win a Calgary bag of her choice. Congratulations Isabel. We'll be in touch with you soon!

Imran Amed is founder and editor of The Business of Fashion