Just like in handbags, leaders in the luxury sunglasses market are moving away from logos and embracing the power of unique shapes.

Just like in handbags, leaders in the luxury sunglasses market are moving away from logos and embracing the power of unique shapes.

LONDON, United Kingdom — Today, sunglasses are more about fashion than function. No longer tethered to the seasons or the sun, they are worn on the subway almost as often as on the beach. They have also become an important and highly profitable product category for major fashion players like Chanel, Prada and Tom Ford through the license fees they generate.

For brands like these, sunglasses have three key advantages, explained Mario Ortelli, senior vice president of European luxury at Bernstein, a financial services firm. “The first one is entry level price point in an accessory product,” he said. The second is that any promotion of the product, traditionally paid for by large licensing partners, by default promotes the brand at the same time — this means any money spent on marketing has extra value. The final appeal of sunglasses is their high penetration amongst younger age groups, making them a good way to build up the brand with the consumer of the future.

Luxottica — an Italian manufacturer, distributor and retailer that holds the eyewear licenses for major brands like Chanel and Prada — dominates the market. In 2014, it generated €7.6 billion (about $8.5 billion) in revenue, making it around seven times larger than its closest competitor, Safilo. Along with Marchon, Marcolin, De Rigo and Kering — a recent entrant into the market after taking its eyewear business in house — these companies constitute the vast majority of global eyewear production and sales.

What’s more, the category is growing. “Sunglasses are continuing to grow as consumers in the middle class seek entry price points into luxury brands,” said Luca Solca, head of luxury goods at Exane BNP Paribas. “Consumers don’t wear the same sunglasses everyday. They change them and they mix them around. This is when we began believing in sunglasses as a standalone category, rather than what they’ve always been called: an accessory,” added Rodney Grunseit, chief executive of Australian sunglasses manufacturer Sunshades.

And yet, while fashion labels have stamped their mark on the sunglasses with a wide range of brand signifiers — from the refined, elegant Tom Ford ‘T’ bar to the ostentatious, look-at-me branding of Versace and Roberto Cavalli — the actual shapes and styles of the frames they sell have remained remarkably similar for many years. The market is flooded with interchangeable product, riffing on long-established styles like the aviator and wayfarer frames popularised by Rayban, as well as the widely replicated bug-eyed shape.

Indeed, in recent years, the category’s growth has come from geographical expansion more than product innovation. “Expansion into market areas, especially in emerging markets, has been the biggest driver of our growth over the last five years,” Massimo Vian, co-chief executive of Luxottica, told BoF earlier this year.

But this focus on geographic expansion left a space in the market for smaller companies to gain a foothold through more unique, innovative designs. “[Luxottica] have a growth platform for decades to come, as they train the mass market to appreciate their brands, but what they did whilst doing that was abandon the early adopters, fashionistas and stylists,” said Grunseit. 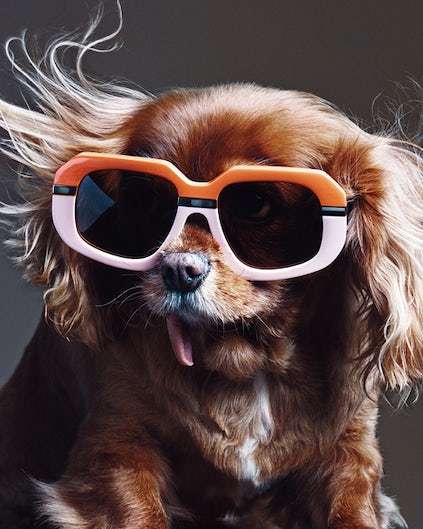 With no small amount of gumption and agility, a handful of smaller players have wrested an opportunity from the Goliaths of the industry. And, by providing sunglasses for the Instagram generation — recognisable for their shape and fashion credentials, rather than the designer name emblazoned on the side, they have stolen a march on the big players. “You’ve got some brands, such as Linda Farrow and other niche brands with very good results. They are putting a lot of these ideas of fashionability in their collections,” said Ortelli. “Sunglasses are following fashion. If you remember in the 1980s, you’ve got many simple t-shirts with the logos on, not a particular design just the logo. In the beginning, sunglasses were not so sophisticated. Now as a product category that has expanded — for sure what you are buying is a design. The logo is not enough and you have to create this idea of something fashionable and unique,” he continued.

In some ways, the sunglasses market is also following the evolution of the market for luxury handbags from logo-mania to must-have shapes. Where once Louis Vuitton’s monogram and the interlocking Gs of Gucci canvas bags dominated the handbag market, today it’s shape — whether the wings of Céline’s trapeze bags or the leather bucket bags of Mansur Gavriel — that resonate with logo-fatigued consumers.

Sunshades was early to recognise and capitalise on eyewear’s shape trend, licensing brands like Karen Walker, Jonathan Saunders and Le Specs. “I’d say it was about eight years ago that we started with the exaggerated styles,” said Grunseit. Exaggerated, shape-driven styles have driven the growth of the Karen Walker eyewear business at a rate of 25 percent year-on-year. Today, the business generates about $30 million a year and, according to data provided by Sunshades, Karen Walker is the number one eyewear brand in London department store Liberty and online retailer Shopbop, as well as one of the top-performing eyewear brands at Barneys New York.

“I think [the evolution from brand to shape] is to do with the general public being much more fashion aware. Now a status symbol is to do with being in the know — differentiating by having a certain style — that people then know is a certain brand,” said Anna Laub, founder, creative director and chief executive of Prism Sunglasses, a London-based beachwear brand that first came to prominence for its boldly shaped sunglasses frames. 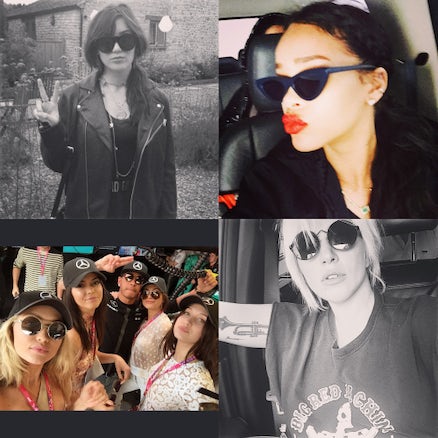 Grunseit believes the rise of shape is due to changing consumer attitudes towards branded product in the digital age. “The success of [our design philosophy] coincided with the growth of social media and Facebook and Instagram specifically. What it meant was that people, unlike in the past, weren’t buying into a brand to show themselves to be at a certain status level,” he said. “They became their own brand and they wanted to show themselves to be unique and exciting.”

Indeed, the rise of social media as a way to indicate status, particularly amongst actors and musicians, has played an important role in driving the shape trend. In the digital sphere, more often than not, branding is obscured or illegible in the small-sized imagery that circulates on popular photo-sharing platforms, while shape is easily recognised and read.

Le Specs, a Sunshades brand known for its attention-seeking designs, priced around $50 to $80, has  resonated particularly well online. The brand has been worn by the likes of Rihanna and Lady Gaga as well as models Gigi Hadid and Dasiy Lowe, all of whom posted images of themselves in their eyewear on Instagram, helping to drive growth by almost 50 percent year on year to nearly $15 million in annual retail sales.

But there is another reason why smaller companies like Linda Farrow and Sunshades have managed to carve out slithers of the market from the dominant players. “The popularity [of exaggerated frames] coincided with the global financial crisis and its impact on discretionary spending. People were spending their money on eyewear to entirely change a look they had and it was only possible because the styles were more exaggerated, crazy, fearless and colourful,” said Grunseit.

Smaller players were able to identify the opportunity and take the necessary risks to capitalise on it. “With the evolution of Karen Walker, in the beginning first few years, large investments showed very limited return. It was a brand building exercise, so part of that philosophy is you really have to accept that there’s going to be a minimum of five years of consistent development and timed distribution and strategy to actually get there," he continued.

A publicly listed company like Luxottica, on the other hand, under pressure to maintain sales and profitability for its shareholders, was not in the same position to take such risks.