LONDON, United Kingdom — Asian apparel manufacturers have been in competition with their western counterparts for decades. As operational capabilities advanced across Asia, the first stage in their evolution was from simple “cut, trim and make” facilities to full package manufacturing. The centre of gravity soon shifted east as Asian producers gained a greater share of the global market.

The next phase saw some manufacturers move up the value chain to develop in-house design capabilities, while others started selling branded products of their own for the local market (OBM companies). However, Asian manufacturing is now ready for its final stage of metamorphosis, which will see some ambitious players compete in a whole new arena.

Empowered by the rise of e-commerce cross-border platforms, more Asian manufacturers and SMEs will be able to export their goods easily and affordably, directly to shoppers. This new generation of DTC (direct-to-consumer) original brand manufacturers (or OBMs) represents stiff competition for established fashion brands in the global mass market. In the basics and price-entry segment, a few have already started offering highly desirable products that create a buzz among fashion-conscious consumers. Take the Chinese manufacturer Orolay which produced a winter coat that sold on Amazon for $139. After going viral, the manufacturer made $5 million of sales in one month, more than the company’s entire revenue for 2017. 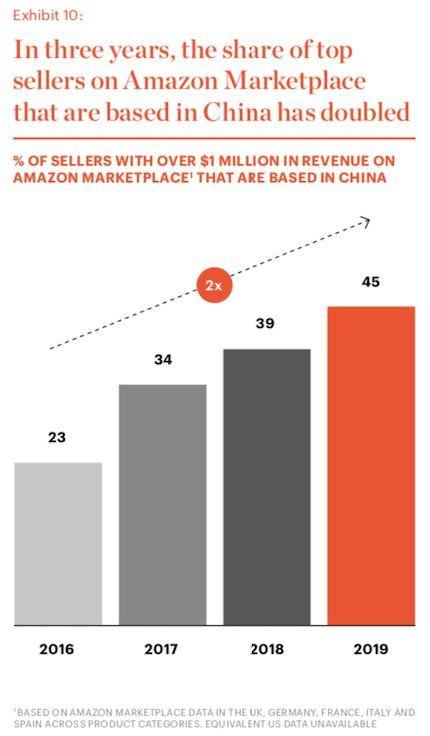 When it comes to supplying global e-commerce platforms, China is the established leader. In the past three years, the share of Chinese sellers with more than $1 million of revenues on Amazon rose from 23 percent to 45 percent — not surprising given that 70 percent of vendors on European Amazon websites are Chinese. In 23 of 30 European countries, the number one non-domestic supplier of goods, based on most recent purchase, is China. And we see the same kinds of numbers playing out in fashion.

Manufacturers that choose to make the switch to DTC can take advantage of the scale available through e-commerce, its relatively low cost (compared with brand-owned websites and physical retail) and, to some extent, its synergy with social media marketing. In some cases, that puts them in direct competition with more established brands and retailers.

China has worked hard to support SME globalisation and DTC players, for example through the development of dedicated distribution hubs. Yiwu, in Zhejiang province, for example, is a megalithic centre for wholesale trading and, increasingly, e-commerce. Its International Trade City hosts around 70,000 shops and 10 million products under one roof.

Why buy a $40 bikini made in America when you can buy a $4 bikini directly from China?

Another factor accelerating the cross-border trade is the sheer dynamism of China’s e-commerce ecosystem. Alibaba in September 2019 acquired e-commerce platform NetEase Kaola in a deal worth $2 billion. It plans to integrate Kaola with Tmall, consolidating China’s second and third largest platforms to create the single biggest e-commerce provider.

Still, it’s not only Chinese e-commerce players with international ambitions. E-commerce platforms across the region are attracting significant investment, enabling SMEs and manufacturers to access pan-Asian and, in the near future, global consumers directly. Alibaba and SoftBank in 2018 put more than a billion dollars into Tokopedia, Indonesia’s largest online marketplace. Alibaba also acquired Singapore-based e-commerce platform Lazada, into which it has injected more than $4 billion over the past three years. Lazada, which has a presence in six Southeast Asian markets, has built logistics and cash-on-delivery networks from scratch.

“Our vision is to drive digital transformation in Southeast Asia,” Lazada Group chief executive Pierre Poignant says. “We believe by giving [digital] access to SMEs, merchants and consumers, we can be a force for good in the region.” Amazon, meanwhile, is working to expand its global selling programme across the region — for example to garment, footwear and leatherwear SMEs in Vietnam.

Investment has been accompanied by a push on infrastructure and logistics, funded by both private investors and governments. Indonesia’s Bukalapak in May 2019 launched BukaGlobal, a unit created to help Indonesian entrepreneurs sell across the region. The move is likely to be the first step in a wider international expansion. The company, along with fellow e-commerce giants Shopee and Tokopedia, has also partnered with the Jakarta government to accelerate the development of the capital’s smart city project. Malaysia (working with Alibaba) has set up a Digital Free Trade Zone, aiming via logistics and a digital platform to unlock the e-commerce ecosystem for local SMEs.

Both Alibaba and Amazon continue to back SME vendors with lending programmes and payments solutions. Cross-border transactions are also getting easier. For example, Alipay and Adyen are partnering to facilitate payments outside the Chinese mainland for merchants trading on Alibaba.

The growing impact of Asian manufacturers and SMEs comes against the background of coordinated global efforts to build digital frameworks, as adherence by e-commerce platforms to global standards has been more challenging to oversee and enforce. Some 76 World Trade Organisation partners in early 2019 launched talks to develop a predictable, effective and safe online environment for cross-border e-commerce trade. China is bolstering consumer protection by making platforms more liable for defective or counterfeit goods.

Platforms will make supply chains leaner and give consumers access to more products and suppliers.

“Platforms will make supply chains leaner and give consumers access to more products and suppliers.” says Poignant. “This will create a bigger pool and reduce prices, which in turn will lead to pressure on big brands.” One platform that is paving the way in helping SMEs and manufacturers put pressure on established global fashion brands is Taobao, the world’s biggest e-commerce website owned by Alibaba. Taobao’s marketplace facilitates consumer-to-consumer sales, mainly in Chinese speaking regions, and has built a reputation as a proving ground for Chinese manufacturers-turned-designers and several successful brands (including Babyghost and Ms Min). While Taobao is still largely domestically focused, events such as the Taobao Maker Festival, which showcases leading designers and manufacturers, provide companies with a window of exposure to overseas markets.

With platforms supporting the growth of cross-border business and offering seamless logistics and education, there is sometimes little noticeable difference between selling domestically and internationally. Lazada provides how-to guides and free online and offline classes to SMEs looking to grow their businesses across borders. Its “Seller App” includes a “Business Advisor” tool that provides information about stock levels and product popularity.

Looking ahead, we expect to see an acceleration of cross-border e-commerce from Asian players, as new platforms continue to emerge, and the trend accelerates in Asian countries beyond China. What does all this mean for established international brands? In short, they need to be on their mettle and ready to respond to new challengers. Over the coming year, we expect relatively unknown companies and unbranded products from Asia to take a bigger share of the market across the region and globally as investments begin to pay off. To stay ahead of the game, international brands need to strengthen their value proposition. In particular, those competing neither on price nor on quality, must think strategically about expanding their online reach and becoming more competitive on pricing.