The Year Ahead: Caution as Economic Downturn Looms

A potential turn in the economic cycle is prompting concern among industry executives over prospects for the coming year.

LONDON, United Kingdom — A potential turn in the economic cycle is prompting concern among industry executives over prospects for the coming year. Following a prolonged period of growth and rising costs, strategic priorities for the subsequent period are likely to focus more on being nimble and boosting productivity.

While last year was characterised by cautious optimism in the face of uncertainty, this year various indicators point towards clouds on the horizon which could somewhat dampen global economic growth prospects. Global growth has averaged above 2.5 percent in the years since the financial crisis, but there are signs of a plateau. Additionally, after a long period of accommodative monetary policy, the US Federal Reserve and other central banks are starting to raise interest rates, increasing the cost of borrowing for many companies and consumers. The European Central Bank is also signalling tightening monetary policy in the coming months, increasing the chance that global economic growth could start to slow.

Forecasts from the World Bank, IMF and OECD predict slower growth in developed markets through 2020, and a flattening of the growth curve in developing markets. Looking ahead to 2019, there are signs that Europe, Latin America and the Middle East could be most vulnerable to a deceleration. The US and China could also face a slowdown, with fears of a potential bubble in the former, and trade dynamics could impact consumer spending and fashion sector growth in both. 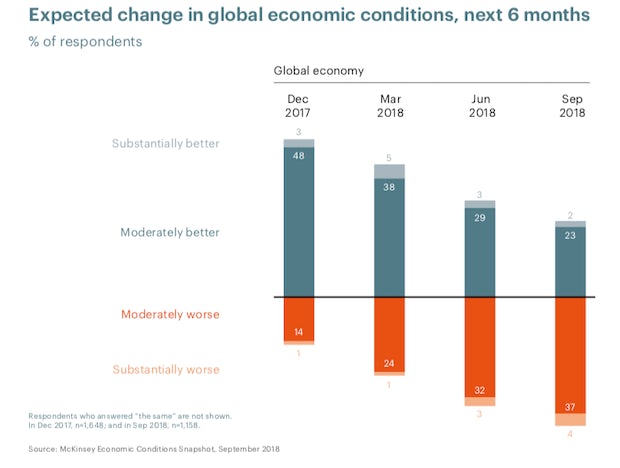 In addition, advanced economies are struggling to lift labour productivity, which has remained basically flat over the past eight years, dampened by after-effects from the financial crisis, while significant advances in automation and digitisation come with lag effects and transition cost. China and India have bucked the global trend and continue to see sharp productivity increases, measured by GDP per person employed. (Productivity growth and increases in the number of employed people are the key drivers of economic growth.)

These official forecasts are also reflected in sentiment among industry leaders. In a survey of more than 1,000 international executives and chief executives across industries published by McKinsey in September 2018, some 41 percent expect global economic conditions to worsen, compared with 35 percent in June 2018 and just 15 percent in December 2017. This sentiment echoes the views of the IMF, whose managing director Christine Lagarde said during a Bretton Woods Committee meeting in October 2018 that “It’s not just clouds on the horizon that we see, but some of the clouds have started opening up, and it’s a bit more than a drizzle.”

None of this has gone unnoticed in the fashion industry. Executives view economic conditions as a potential challenge, citing it as the third biggest trend for 2019 in the latest BoF-McKinsey State of Fashion Survey. Forty-two percent expect industry conditions to worsen in 2019. Excluding respondents from North America and the luxury segment, which are the main pockets of optimism, the majority of executives are even more pessimistic about the year ahead.

The strong performance of the global economy over recent years has been accompanied by rising investments by fashion industry players. Sixty-eight percent of companies’ cost bases have risen over the past five years, while only 22 percent have seen a decrease. Average selling, general and administrative expenses (SG&A) were 36 percent of sales in 2017, compared with 34 percent in 2013, according to analysis from McKinsey’s Global Fashion Index. Priority investments in sales growth named for this year were omnichannel and e-commerce, developing CRM capabilities, improving in-store experiences and investing in brand building. 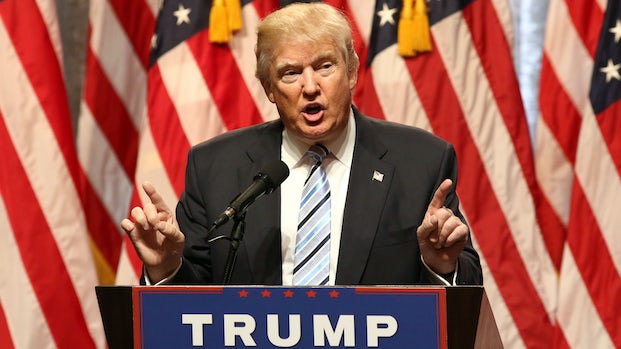 To offset the impact of slower growth and rising costs, companies need to set a strategic agenda to boost productivity over the coming period. Several companies have already taken steps, implementing cost reduction and restructuring programmes. As a result, SG&A ratios have become more fragmented, with leading companies seeing a slower rate of cost increase than laggards. Among companies to act are hosiery and bodywear specialist Wolford, which launched a restructuring programme in late 2017, J.Crew, which said in 2017 it aimed to cut costs and rebrand, and H&M, which said in 2017 that it was aiming to reduce costs by 5-6 percent. More recently, Under Armour announced plans to continue to focus and drive productivity in September 2018.

Looking at the year ahead, 17 percent of respondents to the BoF-McKinsey State of Fashion Survey said they would focus more on improving costs rather than growing sales. The main cost improvement areas cited include reviewing organisational structure (11 percent increase compared to 2018), diagnosing end-to-end efficiency opportunities and reducing product assortment complexity. Still, the proportion of executives planning to focus on cost efficiency is not substantially higher than the 16 percent of respondents that said the same in the previous year, suggesting that, while executives are concerned about economic development, cutting costs is not yet a top priority on fashion executives’ agendas.

Our “winners and losers” analysis in the McKinsey Global Fashion Index may serve as additional inspiration to take a step towards efficiency: on average over the past five years, firms in the top 20 percent of economic profit have seen significantly lower SG&A and COGS as a proportion of revenue (4 percentage points and 6 percentage points respectively), compared with those in the bottom 80 percent, suggesting a strong link between keeping costs low and a strong bottom line.

As the macroeconomic landscape shifts, we expect companies will seek to protect themselves from slower growth by implementing “shock proofing” measures. These will primarily be aimed at boosting productivity through greater efficiency and cutting costs. To ensure these interventions deliver sustainable benefits over the longer term, fashion players should seek to couple productivity enhancements with necessary innovation efforts, such as automation of production, analytics-driven decision making, review of omnichannel footprint and reorganisation for better agility. Those that are successful are most likely to reap rewards in terms of outsized performance.