To Have and Have Not: Inequality Hits Luxury

In some of the world’s largest luxury markets, economic inequality is rising. Should brands be worried?

To Have and Have Not: Inequality Hits Luxury

In some of the world’s largest luxury markets, economic inequality is rising. Should brands be worried?

LONDON, United Kingdom — In a small Central American country, a little-known law firm found itself at the centre of history’s biggest data leak earlier this year. The Panama Papers exposed the secretive off-shore holdings of some of the world’s wealthiest people, laying them bare for all to see. The fallout has implicated 12 national leaders, forced one to resign and beckoned millions more into a debate on the gap between the world’s “haves” and “have nots.”

North of Panama, inequality has become one of the defining issues of a presidential election in the world’s largest consumer market. US voters, increasingly aware of the growing concentration of wealth among the country’s so-called “one percent” have rallied around candidates on both ends of the political spectrum who pledge to restore the American Dream: that equality of opportunity is available to all.

“However one defines it, there is no bigger policy challenge preoccupying political leaders around the world since the financial crisis,” says Gemma Corrigan, economist at the World Economic Forum. Increased inequality, Corrigan says, has been linked not only to increased risk of societal crisis and unrest, but to lower aggregate demand for consumer goods and a “statistically significant negative impact on growth.”

The causes of inequality are many. In the United States, increased global trade and sourcing has eroded America’s traditional manufacturing base, driving the off-shoring of reliable jobs. Meanwhile, average wages have not kept pace with productivity growth and the new wealth created during America’s relatively strong post-recession recovery has accrued disproportionately to a select few.

Wealth inequality — which measures the value of an individual’s assets, such as savings or property, minus their debts — is even more pronounced. In 2012, the top 0.1 percent of US households owned about the same share of wealth as the bottom 90 percent — the nation’s most severe level of wealth inequality since the Great Depression. 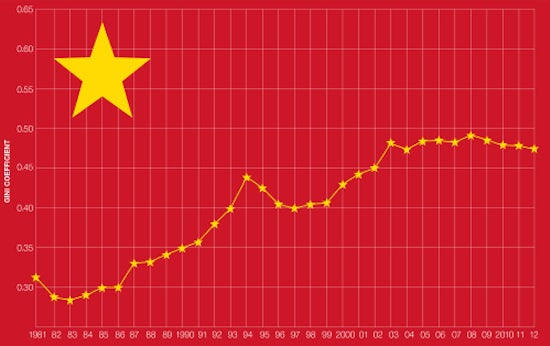 According to government statistics, income inequality in China peaked in 2008 | Source: The World Bank

Across the Atlantic in Europe, sluggish economic growth has contributed to stagnating incomes and rising inequality. What new wealth creation there is has been disproportionately concentrated in the hands of a few: from 1985 to 2010, incomes for the top 10 percent of earners in most European countries grew more rapidly than the rest of the population, according to the OECD. From the mid-1980s to 2008, the Gini coefficient (a measure of income distribution, where 0 represents perfect equality and 1 represents perfect inequality) increased in countries including Italy (0.31 to 0.34), Germany (0.25 to 0.29) and the UK (0.28 to 0.34).

To some degree, rising inequality is a driver of the luxury market. “We have shown repeatedly that increasing income inequality goes hand in hand with luxury market growth,” says Luca Solca, head of luxury goods at Exane BNP Paribas. Flush with cash, newly rich consumers invest in designer handbags and flashy cars to communicate their freshly acquired status.

But what happens when inequality tips too far? For some key figures in the luxury goods industry, rising inequality is raising red flags.

‘Our Clients Will Be Targets’

At the Financial Times Business of Luxury Summit in Monaco last year, Johann Rupert, chairman of luxury conglomerate Richemont, warned: “We can’t have the 0.1 percent of the 0.1 percent taking all the spoils. And folks, those are our clients. But it’s unfair and it’s not sustainable." If inequality continues to rise, he predicted, “Our clients will be targets. They’ll be hated, despised… People with money will not wish to show it.”

Indeed, when times are tough for many people, ostentatious displays of wealth can appear insensitive. According to this year’s Wealth Report by property consultancy Knight Frank, 65 percent of ultra-high-net-worth individuals (defined as having a net worth of over $30 million excluding their primary residence) say they have become more conscious about publicly displaying wealth over the last decade.

Americans used to look at the person who sits in the castle and think, ‘I can achieve that one day.’ Now, they are more likely to think, ‘Frankly, that bastard.’

David Lewis, a neuropsychologist and chairman of market research firm MindLab international, concurs that increased consciousness of inequality may encourage wealthy consumers to shun ostentatious luxury goods in favour of more discreet products, referencing “the narcissism of small differences,” an idea coined by Sigmund Freud. When applied to luxury goods, this describes the habit of purchasing items with very subtle signifiers of their quality and price — for example, a type of stitching that reveals a suit is from a certain tailor, which the average person in the street would not recognise, but which sends a message to other big spenders. “It’s like a club membership badge for other members of the club,” says Lewis.

This may create opportunity for brands like Brunello Cucinelli, which combines a discreetly luxurious product (Cucinelli cashmere sweaters cost up to $3,000) with a social conscience, but spells bad news for many of the world’s biggest luxury megabrands, which trade in instantly-recognisable items designed to telegraph status.

“I would worry that [luxury goods] become, in a way, unfashionable, among the next generation of very wealthy people,” said Nader Mousavizadeh, co-founder and co-chief executive of Macro Advisory Partners and a former member of the executive officer of UN Secretary-General Kofi Annan. Younger consumers, he warns, “will identify what they consider to be the principal social challenge of their generation — which is greater income inequality, and something they think is a social evil — with the products and the behaviour of the luxury industry.”

“Suddenly, Hermès looks like [the oil company] Shell,” he continues. “Not because their products are toxic, but because they are thrown into an economic environment where their consumers are the beneficiaries of this exacerbated income inequality.”

A New Psychology of Wealth

The wealthy don’t drive the majority of luxury spending, however. “Ultra-high-net-worth individuals are capturing nearly a quarter of all luxury spending. You have a tremendously concentrated market at the high-end of these consumers,” says Mykolas Rambus, chief executive of Wealth-X. But the other three-quarters of luxury spending takes place further down the socio-economic pyramid, where the newly affluent and aspirational classes drive a significant proportion of the market.

“[Old money is] largely irrelevant when it comes to share of contribution to revenues and profits," wrote Luca Solca in a column for BoF published in January 2016. A 2014 Exane BNP Paribas report titled Ten Concepts to Luxury Foresight forecasts a “more cautious expectation” of UHNWIs’ contributions to the market and predicts: “The future of luxury growth is bound to be an aspirational and middle-class affair.”

In developed markets, increasing inequality has hollowed out the middle class. From 2000 to 2014, the share of Americans living in middle-income households (defined as $42,000 to $125,000 annually for a household of three) dropped in 203 of 229 metropolitan areas surveyed by Pew Research Center. In Europe, too, middle incomes have contracted in all EU countries except Belgium, France, the Netherlands and Sweden in the last decade, depressing some middle class consumers’ ability to spend.

What’s more, inequality has changed the way middle class people in developed nations feel about wealth and the wealthy, with major implications for the aspirational and emotionally-driven luxury industry. Indeed, when consumers feel worse of relative to the past or shaky about their future, they “typically postpone their purchases. Or they significantly reduce their budget,” warns Solca.

“The view has often been that someone who’s created substantial wealth, good for them, they must have worked very hard, I too can achieve that one day. There is admiration for the person who sits in the castle,” says Rambus. “That is diminishing, and diminishing fast.” Now, he says, people are more likely to look at the person in the castle and think, “Frankly, that bastard.”

A Different Equation in Asia

Outside of the US and Europe, however, inequality — and its impact on consumer psychology — is quite different. The rapid economic development of nations like China, India and Brazil has lifted millions out of poverty and led to significant new wealth creation, oftentimes reducing the economic gap between rich and poor. 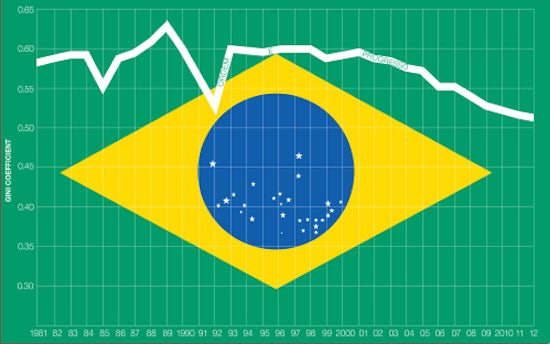 Since the mid-nineties, income inequality in Brazil has consistently decreased| Source: The World Bank

In Latin America, income inequality — though high — is falling: from 2000 to 2010, the region’s average Gini coefficient dropped from 0.54 to 0.5, lower than at any time in the last three decades. In India, where the richest 10 percent of Indians own 76 percent of the country’s wealth according to Credit Suisse, inequality remains a major issue. Still, millions of people have entered the burgeoning middle classes, now numbering more than 250 million.

But no market is perhaps more important to the global luxury industry than China, where the Gini coefficient peaked at 0.49 in 2008 and has been falling ever since, according to official government statistics. The accuracy of these figures is disputed, however. A 2016 report by Peking University calculated that China’s Gini rose from 0.3 in the early 1980s to 0.49 in 2012.

The country’s wealth gap has not gone unnoticed among consumers. “There’s a very strong attitude that if you’re rich in China you somehow got there through corruption,” says Liz Flora, editor-in-chief of Jing Daily, a website covering the luxury industry in China. A slew of viral images on social media platforms like Weibo, showing government officials sporting luxury watches and handbags, and a “growing animosity toward the rich” were amongst the drivers of president Xi Jinping’s anti-corruption crackdown in 2012, which has, in turn, strengthened the perceived link between luxury goods and corrupt wealth, says Flora.

“It is not like before, when it was socially acceptable to showcase luxury products in front of the public,” adds Angela Wang, partner and managing director at Boston Consulting Group in Greater China.

Unlike in the West, however, the number of middle class consumers in China has skyrocketed: in 2000, 4 percent of urban Chinese households were middle class (defined as earning 60,000 to 229,000 renminbi ($9,000 to $34,000) a year), according to McKinsey and Company. By 2012, this had grown to 68 percent. As a result, Chinese consumers see luxury goods very differently to their counterparts in Europe and the US.

“The overall sentiment in China is still trading up,” says Wang. Inequality, she says, “is not, right now, the hottest subject on the market. Consumers are still very open and willing to explore new things, especially the upper-middle class and middle class, who are typical aspirants of luxury products.”

But as concerns about the country’s slowing growth — as well as anxieties about pollution or food safety scares — weigh on China’s middle classes, and inequality in Europe and the US continues to grow, should luxury brands worry?

“Brands don’t need to be shy about what they are,” says Claudia D’Arpizio, a partner at Bain & Company, though “they probably need to better justify the price premium” of expensive goods with craftsmanship and quality.

“Consumers are more sophisticated, where they have less money,” she adds. “Now, the challenge is providing real value for money, real creativity and real richness to more inclusive and affordable price points. Creativity doesn’t necessarily need to be expensive.”

This article appears in BoF's latest print issue, A Connected World, a special briefing which examines how growing global interconnectivity impacts the way we create, communicate and consume fashion. To order your copy for delivery anywhere in the world or locate a stockist, visit shop.businessoffashion.com. 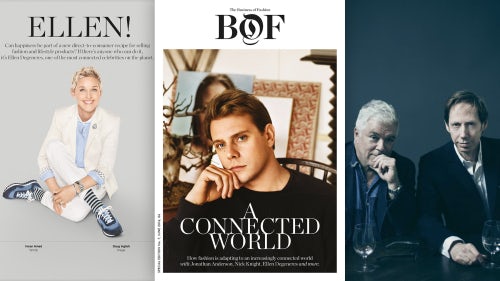