As the global demand for timepieces slows, companies are eager to draw from the relatively untapped well that is the ladies watch segment.

As the global demand for timepieces slows, companies are eager to draw from the relatively untapped well that is the ladies watch segment.

NEW YORK, United States — It’s a tough time for haute horologists. Fluctuating currency rates, an unstable global economy and a major sales slowdown in China has caused a once-solid market to crack. Combine those elements with the rise of the smart watch — which has begun to chip away at the market share of traditional watches, at least on the lower end of the upscale — and luxury watchmakers find themselves in a perfect storm of negative factors.

In the past year, the market has shrunk by 6 percent at constant exchange rates, according to market research released by Bain & Company. To be fair, if you measure at current (i.e. fluctuating) exchange rates, luxury watch sales have jumped seven percent.

While only some have thus far chosen to join the smart watch race — most recently, Tag Heuer with its Android Wear device — nearly every major luxury watch brand has made a concerted effort to appeal more directly to a still relatively small market: women. 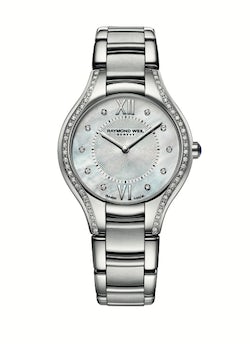 Jaeger-LeCoultre, Omega and Rolex have all either created new lines marketed to women or individual watches that appeal to ladies. In March 2015, Tag Heuer enlisted model Cara Delevingne to design a range of watches priced between $2,250 and $4,000. (Delevingne, of course, also starred in the campaign.)

“When you look into the luxury goods industry, the watch segment is the weakest, leather goods is doing okay, and the best is jewellery, which is primarily bought by women,” says René Weber, an analyst at Vontobel. “Two years ago, watch companies started to look much more into the [women’s] segment.”

There are several factors at play here. One, as noted by Weber, is that watch companies believe women will treat their timepieces like a piece of jewellery. Another is the rising number of women exchanging dainty quartz dials for larger watches with multiple complications. “In the last 10 years, we’ve noticed the ladies’ segment moving toward bigger-sized products: 36, 38, 40mm,” notes Raymond Weil chief executive Elie Bernheim. “While we have a 100 percent ladies collection that is 24mm to 36mm, there is also a unisex product that many women wear today.” Combine new demand with the shrinking of the Chinese watch market — which slowed after the government crackdown on gift giving and the rise in Chinese tourists buying their luxury goods abroad — and potential for women’s watches seems great. In Switzerland, for instance, the number of Chinese tourists — 50 percent of whom are female — has risen 39 percent year-on-year. “In the past, the watch was mainly a jewellery item of the men’s world,” Weber notes. “But that’s changing.”

Many firms have taken the unisex route. In September 2014, IWC introduced the Portofino 37 collection, a line geared towards customers — both male and female — with smaller wrists. “We are expanding into creating pieces that might be considered more aesthetically feminine,” acknowledges chief marketing officer Franziska Gsell. But she’s also quick to point out that, “IWC has long had female customers. This isn’t a completely new space for us.”

Other brands are not so shy about their ambitions to attract women. Hublot, which first introduced its colorful Big Bang Tutti Frutti in 2008, has had recent success with more feminine products including this year’s Big Bang Broderie. To build the piece, Swiss embroidery from St. Gallen was directly applied onto the dial, bezel and strap. Model Bar Refaeli, the company’s new female ambassador, was on hand to unveil the Broderie earlier this year in Geneva. Today, women’s watches represent 25 percent of Hublot’s business. “Our female customers are quite assertive about their choice of watches,” says Hublot chief executive Ricardo Guadalupe. “[The segment] is growing more and more.” 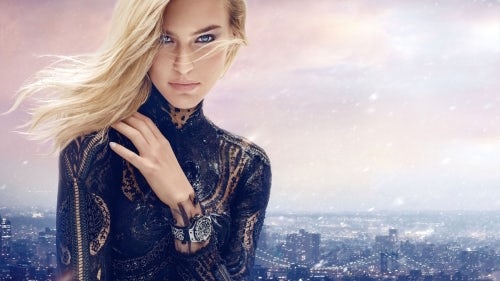 According to Chronolytics, a German-based firm that tracks online watch consumers in the luxury segment, popular styles amongst women include Omega’s Constellation, the Datejust and Lady-Datejust by Rolex, the Royal Oak Lady by Audemars Piguet and Chopard’s Happy Sport. (“Luxury,” in this instance, is categorised as watches that cost upward of $500.) While the percentage of those searching for women’s watches is still relatively low, it’s increasingly dramatically. Interest in Omega’s women’s watches, for instance, has increased in the third quarter of 2015 by 49.8 percent from the same period last year.

What is perhaps more remarkable is the lack of traditional women’s luxury brands on the list of most-searched for watches for women. Chanel’s J12 was the only watch from a fashion brand to make Chronolytics’ top 10 for the third quarter of 2015. “Traditional watch brands will see a stronger winter, so to speak,” says Chronolytics co-founder Robert-Jan Broer. “Watches are doing well because ladies are more interested in buying mechanical watches. The segment is more difficult for luxury brands.”

In many cases, that’s because many fashion labels have not invested heavily in making watches that can compete in terms of quality with the Swiss stalwarts. Some, however, are working hard to bring their watches up to par. Hermès, for instance, bought a 25 percent stake in maker Vaucher Manufacture Fleurier in 2006, as well as a 32 percent stake in case maker (and longtime Hermès supplier) Joseph Erard Holding in 2011. While Hermès’ watch sales were down 2 percent in the first nine months of 2015, women’s watches represent 80 percent of the business. Bucking the general trend of the industry, “small, feminine designs are becoming more popular,” says Robert Chavez, U.S. President and CEO of Hermès, citing the quartz Faubourg watch — introduced in 2015 — as a best seller.

Perhaps the most telling factor is that watchmakers that have been in the women’s market for some time have seen their share shrink. In the 1990s, approximately 75 percent of Raymond Weil’s U.S. business was women’s watches. In 2015, its men’s and women’s sales are roughly equal. This is, in part, by design. The company — which sells watches that fall into the accessible-luxury price range — has grown in the past 20 years. (While the private company won’t disclose revenue figures, it produced 200,000 watches in 2014 at an average $2,000 per unit.)

“[In the 1990s], the offering was not what it is nowadays,” says Raymond Weil chief executive Elie Bernheim. “Then, we were the only brand.”