BoF examines how luxury department stores are teaming up with urban labels like Kith and Off-White to tap millennial spending and open new sales channels.

BoF examines how luxury department stores are teaming up with urban labels like Kith and Off-White to tap millennial spending and open new sales channels.

LONDON, United Kingdom — “Being in Bergdorf authenticates what we're doing. It gives us credibility, 100 percent for sure,” says Ronnie Fieg, founder of upmarket streetwear store and label Kith, which, this September, opened a shop-in-shop at the luxury retailer’s men’s store, just one week after the launch of Rihanna's Fenty x Puma line across the street at Bergdorf Goodman's women's store.

The collaboration was the first of its kind for Fieg’s upstart streetwear empire and the venerable Manhattan department store alike, and kicked off with a capsule collection of six limited-edition products, ranging from baseball caps ($75) and hoodies ($180) to complete tracksuits ($330), many of which rapidly sold out.

But Bergdorf Goodman is not alone in its embrace of high-end streetwear labels. Last month, London’s luxury department store Harvey Nichols worked with Kristian Andersen, fashion and design director of the Copenhagen International Fashion Fair, to launch a contemporary pop-up space on its men's floor, named Project 109 X CIFF, celebrating emerging street fashion brands including 424, Axel Arigato and This is Not Clothing. A number of other luxury department stores, from Galeries Lafayette to La Rinascente to Selfridges, have also been stocking more high-end streetwear labels.

The interest in streetwear is rooted in the need to attract new millennial customers and help shake off slow growth linked to shifting consumer behaviour and the rise of e-commerce and monobrand stores. Between 2015 and 2016, the global retail value for department stores grew by just 2.3 percent, with those in the US increasing by only 1.4 percent, according to recent data provided by Euromonitor.

Streetwear has offered a way for them to drive customers into the store that perhaps hasn't been there before.

“Department stores today are most insistent about getting traffic and appealing to a new consumer — those are their biggest objectives,” says Robert Burke, chairman and chief executive of consulting firm Robert Burke Associates. “Street style has offered a way for them to drive customers into the store that perhaps hasn't been there before,” he adds.

“There's a cross-generational appeal and what's interesting is that these two worlds are finally meeting in the middle,” agrees Jian Deleon, senior menswear editor at WGSN. “A typical streetwear consumer might have walked into a Bergdorf or a Barneys and might not have felt like anything spoke to his or her personal style or cultural taste, so it validates the culture now on a more massive commercial scale.” 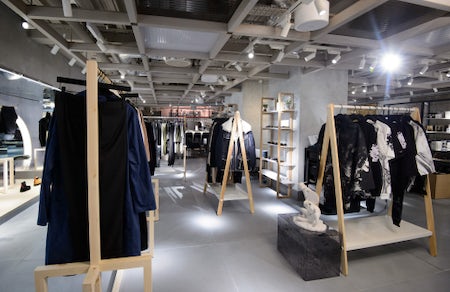 Department stores are also attracted to the way streetwear labels engage their customers with weekly product drops, communicated via social media and designed to drive excitement with a stream of constant newness. “When Ronnie [Fieg] proposed his idea of this core collection augmented by limited-edition collaboration product that would have organic demand generated by social media, we were very attracted to that idea,” explained Joshua Shulman, president of Bergdorf Goodman and Neiman Marcus Group International, in a previous interview with BoF.

“With these lines in specific, we certainly see a younger customer in the store, but what's also interesting about these brands, specifically, is that their connection to their client is direct, through social media,” adds Bruce Pask, men's fashion director at Bergdorf Goodman. “I think it really has empowered their customer and it maintains that interest and engagement.”

“We have seen an immediate response with the drops creating a repetitive customer where they want to come back and spend time in the store,” continues Pask. “You're creating this need and desire that you want to be back in the store and check what the latest drop is, and I think it creates a great level of engagement.”

Kith currently has over 717,000 followers on Instagram, while Fieg’s personal account has over 458,000 followers. Meanwhile, the Instagram accounts of Off-White and its founder Virgil Abloh have a combined following of over 1.25 million.

You're creating this need and desire that you want to be back in the store and check what the latest drop is.

Clearly, department store partnerships can also benefit streetwear brands, providing them with powerful new sales channels, not to mention access to a new consumer base and increased high-fashion credibility. Kith's shop-in-shop at Bergdorf Goodman, for example, is located adjacent to luxury brands like Thom Browne, Dries van Noten and Tom Ford. Similarly, Off-White has a shop-in-shop across from Louis Vuitton and Alexander McQueen at London’s Selfridges.

“Department stores allow me the luxury to design in both the streetwear and the high-fashion mentality,” says Abloh, whose brand is currently stocked at 25 department stores across the world, including Barneys New York, Galeries Lafayette and Harvey Nichols, which, all together, account for about 15 percent of the company’s total turnover. But this hasn’t diminished the brand’s street-cred, emphasises Abloh. “Streetwear used to be an independent retail thing, very much like you didn't want to sell out. One thing that millennials have taught us is that the idea of selling out doesn't exist to them and you don't lose credibility by being in an established department store.”

Authenticity is critical to ensuring the success of a partnership between a streetwear label and a department store, however. “It's not enough for the department stores to just bring the brands to the store, you have to act and speak the language of the consumer and the brands if you want a long-term relationship,” says Kristian Andersen.

Robert Burke agrees: “When it's anything less than authentic, it can backfire on both parties and it will die a quick death.”