LOS ANGELES, United States — Frieze, the art fair that launched in London in 2003, made a visible impact on Los Angeles during its debut in the city this week, despite the uncharacteristic downpour. Over 70 galleries, both local and global, participated in the event, which centred on the famed backlot of Paramount Pictures Studios in Hollywood, but spilled across the sprawling city in the form of panel discussions, musical performances and private dinners. All in all, the fair attracted an estimated 30,000 visitors, including gallerists, collectors, and plenty of art-savvy celebrities and industry insiders, including Brad Pitt, Annie Leibovitz and Raf Simons.

“Our conversations with leading figures here showed that the time was right to create an international moment that focuses on LA and brings people here from all over the world,” said Victoria Siddall, director of Frieze Fairs.

The opportunity was certainly not lost on fashion brands and retailers like Gucci, Rimowa, Dover Street Market and Matches Fashion, which all staged activations during the fair, hoping that what some insiders have come to call the “Frieze effect” will work to boost brand — and sales — here in LA, much as it does when the fair touches down in London and New York.

Los Angeles has long been home to big-ticket artists like Ed Ruscha, John Baldessari and Sterling Ruby. And though the city has yet to truly cement itself as a hub for art sales, the confluence of entertainment and celebrity; a revitalised museum scene in the Los Angeles County Museum of Art, The Broad and The Marciano Art Foundation; the rise of local luxury retailers; and the influx of designers and artists now calling the city home have created a compelling blend of art, fashion and commerce.

In LA’s downtown arts district, Hauser & Wirth’s mega-gallery, complete with a restaurant and gift shop, anchors a once-gritty area that now contains luxury lofts, award-winning eateries and the likes of Dover Street Market, 3.1 Phillip Lim and The Row DTLA, a collective of shops, eateries and pop up art exhibits.

Fashion and brand consultant Katherine Ross, a former vice president of communications at LVMH who is married to Los Angeles County Museum of Art (LACMA) director Michael Govan, cites Gucci’s partnership with the museum — and its annual Art + Film Gala fundraiser, a celebrity-heavy event that some have dubbed “the Met Ball of the West” — as evidence of large-scale opportunity.

“I think the free spirit of Los Angeles lends itself to this type of collaboration and synergy,” she said. “Frieze LA is another great opportunity for brands to have an interesting platform and engage audiences in a new and different way.”

On a bustling corner of West Hollywood, this week, stood a massive Rimowa suitcase rendered in neon blue, orange and pink by the artist Alex Israel. The installation was inspired by the Los Angeles sky and came with a range of regular-size suitcases in the same saccharine shades. “I like to think of the suitcases as a blank canvas,” said Alexandre Arnault, chief executive of Rimowa, while gazing up at the giant piece of luggage which inadvertently doubled as a climbing gym for several children running through the installation. “As Los Angeles is becoming more relevant not just in art, but music, fashion and architecture, our hope is to gain more access to the art world and more awareness from within the industry.” 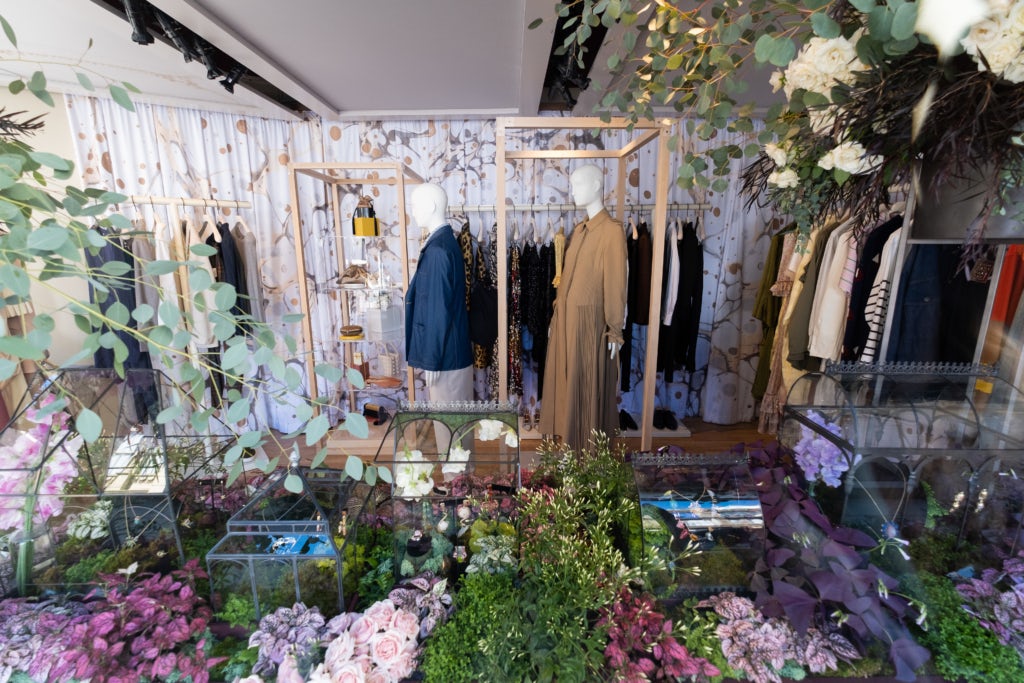 The 20-foot-tall suitcase remained on exhibit through Saturday and drew tastemakers including China Chow, Sara and Erin Foster and Fuschia Kate Sumner, along with architect Kulapat Yantra and artist Yi Zhou. “We care about cultural impact,” said Hector Muelas, chief brand officer of Rimowa. “Did the cultural community participate? Did it spark a conversation?”

Gucci screened four films during the week, reprising an approach it has used at Frieze New York, while Dover Street Market, which opened its LA outpost just 4 months ago, held one of its signature open house-style events, showcasing a mix of fashion, music and art, including an installation by The Underground Museum, talks with artists and musicians. Peppered throughout the store were featured pieces by Jacquemus, Chanel and Simone Rocha, among others.

“There’s the existing synergy between our clients who both shop at the store and attend Frieze,” explained Marissa Jartcky, head of buying and merchandising at Dover Street Market in Los Angeles and New York. “Also, our store just opened in the Arts District. It’s the perfect opportunity to celebrate the inaugural fair and connect with the community.”

On the first night of the fair, online rival MatchesFashion held a dinner with private arts club The Cultivist, followed by a robust line-up of panel discussions and fashion presentations inside a pop-up version of its 5 Carlos Place townhouse, the private shopping and events space opened by the e-tailer in London’s Mayfair last September. Much like Dover Street, the company was betting on the crossover art-fashion crowd and aimed to offer something more than shopping.

In Los Angeles, there is a seamless blend of who the art customer and the fashion customer are.

“What we’re looking for is the purity of creativity and the opportunity for our customer to discover,” said Ulric Jerome, chief executive of MatchesFashion. “LA fits really well into that strategy.” Alongside pieces by Simone Rocha, Halpern, Batsheva and Cecilie Bahnsen, the program included live conversations with tattoo artist Dr. Woo, The Elder Statesman’s Greg Chait, jewellery designer Daniella Villegas and the co-founders of RAD Fashion Advocacy.

In total, the retailer did more than 25 events, three live streams, three musical performances and five podcasts to coincide with the fair. “We tried to build the program around local tastemakers,” said Jerome. “We went with musicians, contemporary artists and gallery directors who are all LA based. The more local we go, the more authentic we become.” The retailer also aimed to capture new emails and incentives sales by offering $200 gift cards.

Designer Rosetta Getty and Princess Alia Al-Senussi hosted a talk at Neuehouse featuring Analia Saban and Hayden Dunham in collaboration with Cultured magazine. “So many of my customers, friends and muses are artists and part of the art world,” said Getty. “In Los Angeles, there is a seamless blend of who the art customer and the fashion customer are.”

Jasmin Shokrian, the LA-based designer and a speaker on the MatchesFashion line-up has go so far as to start showing her collection at global art fairs instead of fashion weeks. “My brand has always been informed by the lifestyle around art,” said Shokrian. “My clients are collectors, advisors, gallerists. It’s exciting to see that the landscape of LA is more bustling than ever.”

Beyond Picasso: Jewellers Set Up Shop at London’s Art Fairs